Shute Stumpsniffer was born and raised in the Dungeon of Dread (as it is called by surface-dwellers), a section of The Underdark that was lorded over by Gramzon – a now young adult female purple dragon.

Shute has been perpetually on the sidelines of a larger conflict over an ancient and powerful artifact that was stolen by Gramzon: A large orange jewel, cut in the shape of a flower and mounted in a brooch of gold. But, the item has gone missing and agents are fighting each other while looking for it – seeking out all who lived in the area during its disappearance. But Shute had left, unnoticed, weeks earlier, immediately after “finding/collecting” the contested jewelry. She did this without understanding its importance or understanding the conflict that it would generate. At first she thought it most beautiful and began to call it “Jacinth” – though she couldn’t recall why anyone would have told her it’s name. But over time it became less lovely – in fact she started to dislike it for no particular reason – so she soon lost interest in it and eventually misplaced it. She doesn’t know where it is. Perhaps it was lost when she left the underdark? Or was it in Punjar? Maybe another thief stole it?

What Shute does remember is that it was in the protection of a powerful illusionist she knew as a goblin-child. He always seemed very concerned about some power struggle she didn’t understand. She called this wizard “Birdy” because he would entertain her with the illusion of a giant rainbow Phoenix. She felt safe and protected whenever the Phoenix appeared – and in her youth she mistook it as a god.

In the years since leaving the caves, Shute has come to doubt the meaning of The Rainbow Phoenix, but has had an interest in the legend her entire life. She seeks information in markets everywhere she goes and has found that there is a tradition of inscribing rainbow phoenix icons with short excerpts from some unknown text. So far, though, she has only managed to collect a small pewter cast of one of these inscriptions, it reads:
“I am the Phoenix. I rise in flames, and ride the waves of time.” – The Rainbow Phoenix, iix

See The Summoning Page 1 for a description of major developments with this character! 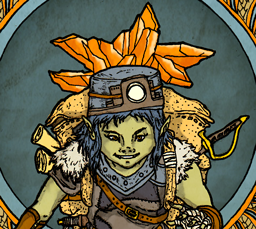