The Staircase of Desolation 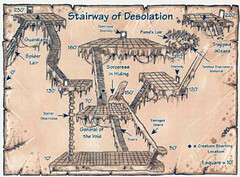 The Stairway of Desolation

After their first night of rest on The Infinite Staircase, Team Beholder set off for the entrance to The Mirror Library, escorted by a member of the Planeswalker’s Guild: Ghiaridonna – A blue-skinned Barbarian. He is headed to a portal very near the one to Timeresh. 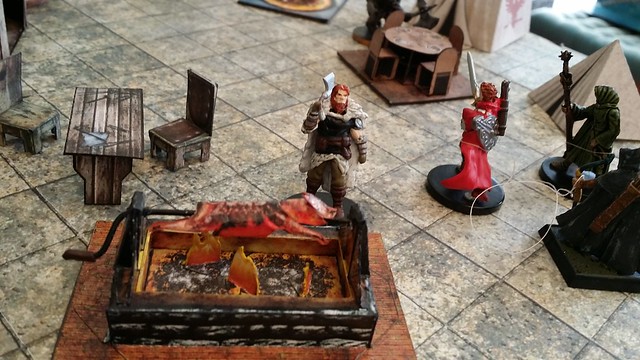 After climbing staircases for most of the day, they finally arrive in the Blue Mushroom area of the staircase… 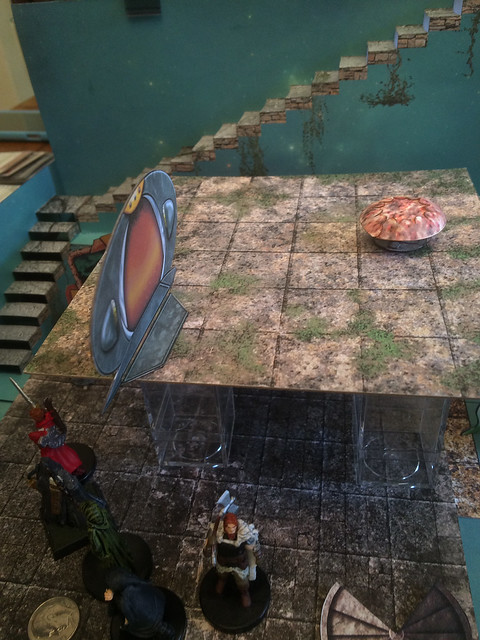 “Something’s wrong…. At the top of that spiral staircase there should be another stair – to the platform with the portal I’m trying to reach…” 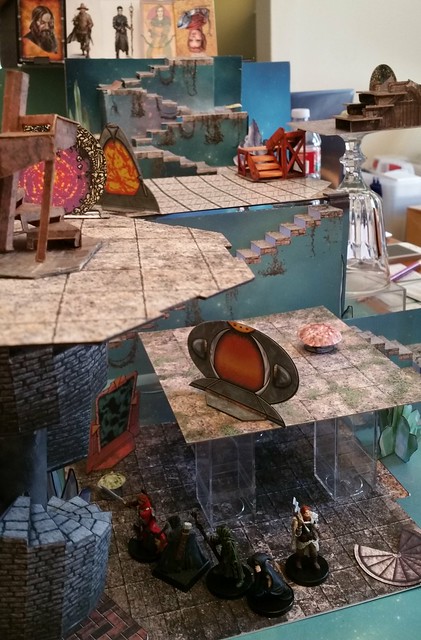 Quinn: “Man, those stairs are pretty beat up. Let me check it out, the rest of you remain here…”— 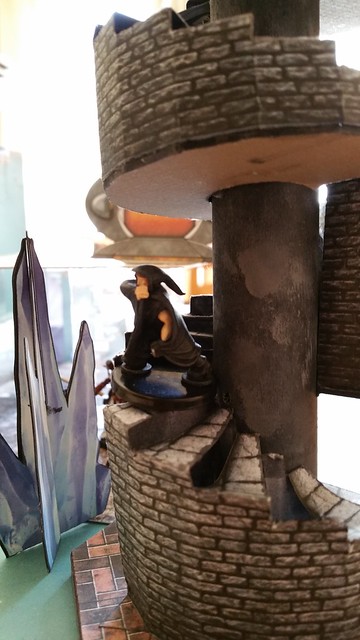 When he reaches the platform, he discovers that is it unstable – shifting under his weight – and that there is a thick set of strong spider webs leading off and up to the platform Ghiaridonna mentioned. He shout’s down over the edge “It’s been destroyed, and I see no sign of a portal on the platform. And there are giant spider webs - WHAT? Oh! Trouble!” 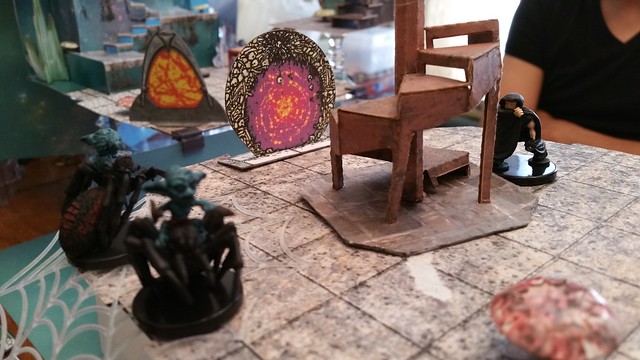 Strange short blue creatures start swarming from the distant platform, heading over the web directly at Quinn – who quickly repels and swings down to a lower platform. 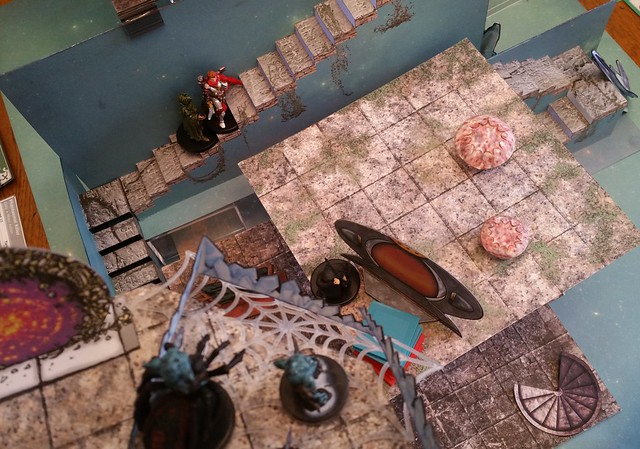 The barbarian keeps the mites at the base of the stairs busy which the Irregulars position for better advantage…. But Barton turns around just in time to see what’s been causing the devastation… 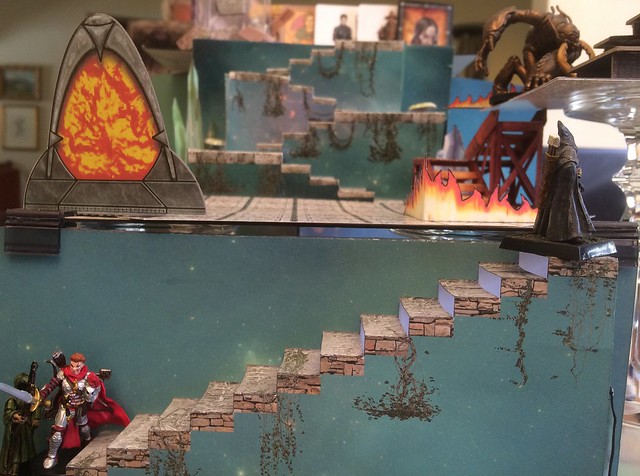 They now are engaged on two sides – mites and spiders on one, and a stair-smashing Abyssal Hulk on the other. They are now fighting on six platforms at once! 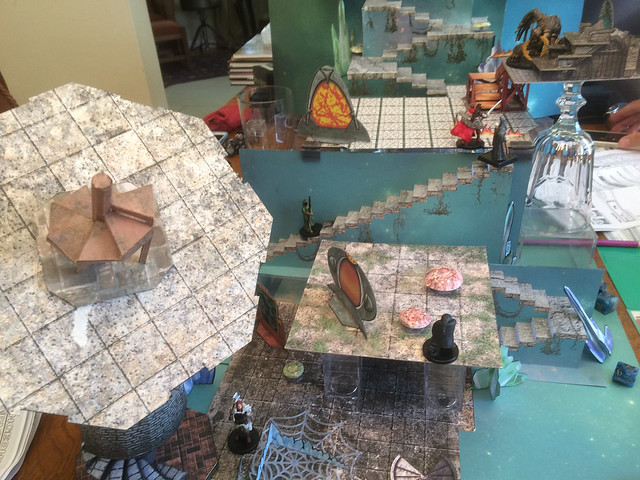 The traffic of all the mites and combat has totally destabilized the platform at the top of the spiral, and it collapses! Stepping out of the way, the Planeswalker quips:“I’ve never heard of that happening before. Damn odd, that.” 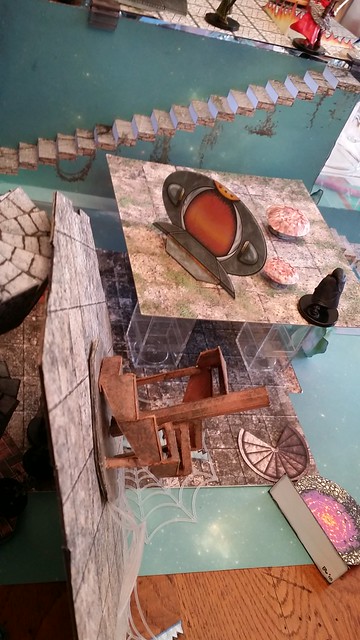 After several close calls of team members being thrown off the middle platform, they defeat their foes. 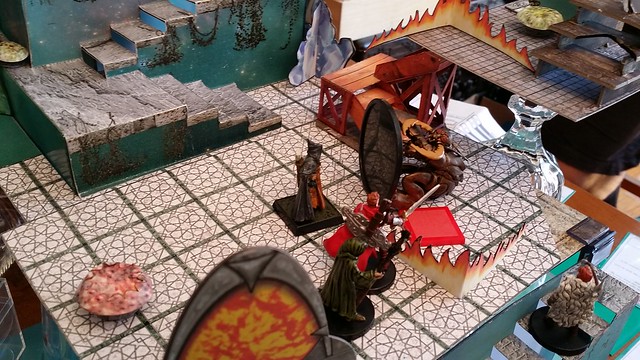 Making their way to the upper platform, where the portal to Timeresh is supposed to be, they encounter complete devastation – the portal has been torn to shreds, and fragments of it are in a large “nest” made of stair, platform, and portal fragments in the far corner of the platform. 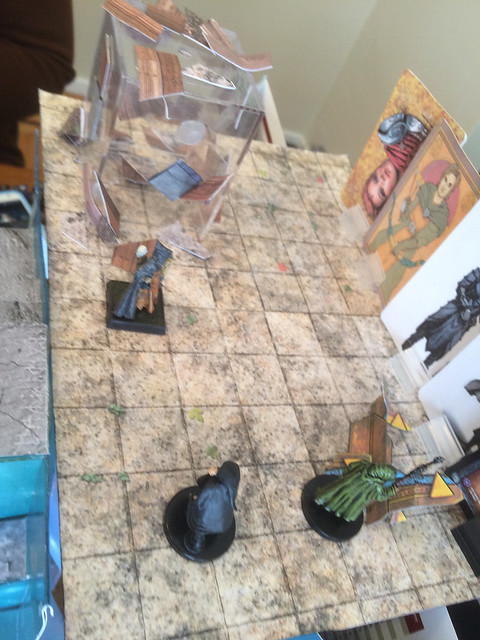 Galen attempts to find the fragments of the portal and re-assemble them. “It doesn’t work.”, he sighs in defeat. “We are screwed.”

Ghiaridonna replies – “You’re no dimensional architect – but you may have restored the portal from Timeresh to here – it will have to be re-linked from the other side.”

“Is there another way to the Mirror Library from the stair?” – Abani askes, with a tone that says she’s sure what the answer is, and it isn’t good.

“No. I don’t think so. But let’s rest and return to the guild as soon as possible. There isn’t supposed to be a way for a single monster to destroy staircases and portals, but this one obviously did, so I don’t know as much as I thought I did.”

“Isn’t it a bit a little odd that just the gates we needed are destroyed?”, Quinn asks rhetorically – of the air.

Ghiaridonna doesn’t answer, but his reply might be thought to “We should probably rest someplace more stable, then set watches…”

After an uneventful rest, they return to The Ivy and Ghiaridonna bounds up the staircase ahead from the Irregulars. 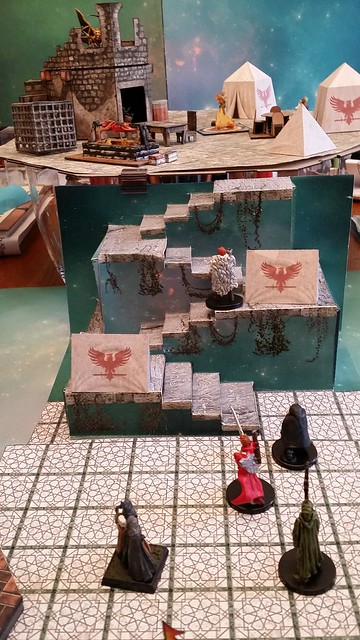 Breathlessly, Ghiaridonna and the group report their discovery, and concern to Hav’run Thain and the other Planeswalkers there (several more have arrived over the last few days.)

The guild talk among themselves before Abani asks “Is there another way to Timeresh? We still need to get there.” Gael ads “Perhaps I can fix the portal from the other side when we get there.”

Hav’run hushes his guildmates – “No. Not from the stairs. But there may be another way – ‘Pathfinder’… Whaaa?”

As he mentions the name, a number of pale-green-skinned Githyanki all appear upon the platform simultaneously. Their leader looks and sounds “female” – but the Irregulars have no experience with this race. She speaks clearly and firmly: “These one-world berks will return to the Ivy Base and leave the planes immediately, or all here will die.” 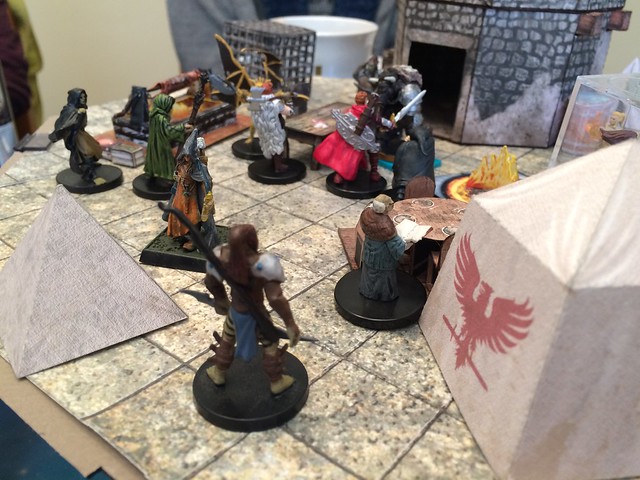 A guild member mage curses under his breath “Githyanki pirate softheads…” Barton speaks more loudly, pointing at one of the attackers – “I saw you spying on us at the Ivy Base. Did you guys send that Hulk— that was breaking the stairs?”

The gith leader shouts out “Wrong answers!” and combat ensues.

The first few seconds go very badly for our heroes, with several of them being severely wounded before they can even arm themselves.

Then, a small female grey Svirfneblin runs up out of one of the tents on the stairs…. 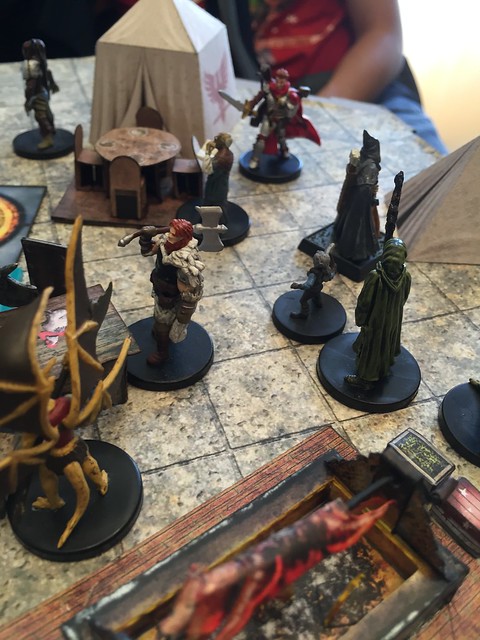 Placing her hands on the most wounded, she says “Hi, I’m Pvel – you’ll be just fine.” healing the worst of their wounds. This would turn the tide of the battle… 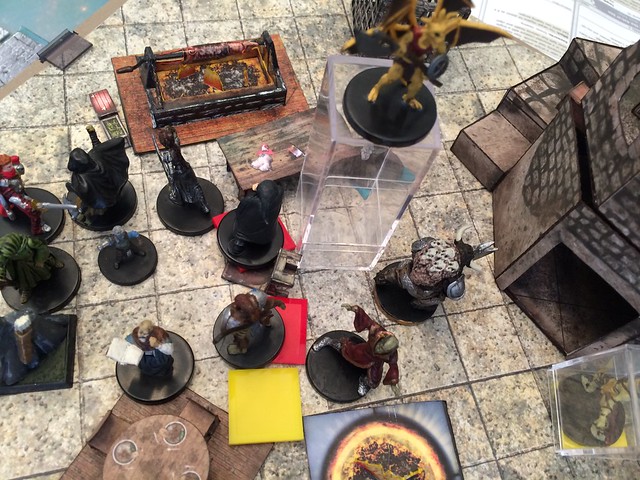 Pushing himself to the limit, Quinn pursues the leader, being relentless with his attacks – even the Gith healer can’t keep up – and eventually the rogue hits her right between the ribs(?) “You can’t win! Surrender now and live.”

He did break her spirit, but instead of surrendering, she made an unfamiliar noise – each of the greenskins reached for their belts and vanished. Quick probes determined they were not invisible, but gone. The battle was over.

“Pvel – Thanks for helping us!” Hav’run went to hug the dark gnome, but thought better of the sight of a Minotuar grabbing her tiny figure, and caught himself at the last moment.

He continued “As I was saying before we were so rudely interrupted. You’ll need to get Pathfinder – a magic sword that can find the shortest path from where you are to anywhere in any plane. It belongs to Timlin, and he’s in Sigil.”

“Trapped in a maze, he is. We’ll have to find the maze, get and out of one of the Lady of Pain’s mazes, with the sword!”, pipes in Pvel.

“This is all confusing! Lady of Pain? Mazes? What?”, though Barton said the words, team Beholder was completely at a loss as well.

“Don’t worry!”, Pvel say reassuringly, “I’ll take you there and explain everything. We’ve got lots of time to get there anyway.”

And, as soon as they’d prepared, they set out for the portal to SIgil, The City of Doors, The Cage. 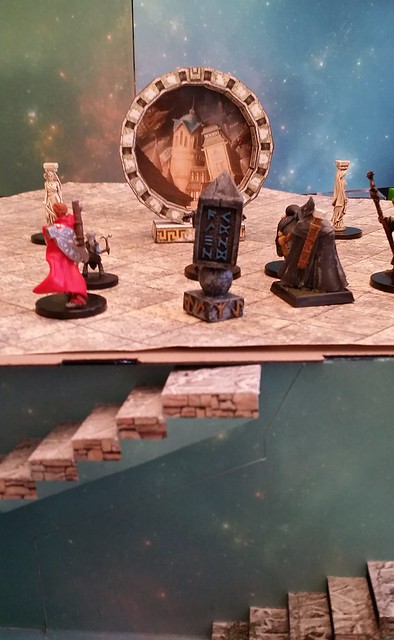 “These people sure have a lots of names for things.” gruffs Quinn.

The portal is quite different. Quite a bit larger, and it has an odd property…
“Why is the image in the portal rotating? And why are the buildings leaning like that?”, quizzes Gael.

“Because it’s not moving.”, Pvel jokes. “You know a doughnut (do you have those)? The city is on the inside of the outer crust. And it is constantly inverting itself (well, relative to our position.) On their end, this portal is running along the center of a road, rotated like a wagon wheel.” Pvel senses the confusion in the group.

“Here, it’s simple, try to jump through as quickly as you can one after the other, otherwise you’ll have a bit of a walk to catch up with each other…”

“Go!” she shouts, and each member jumps through the looking glass…

Catch up with them on “Lost in Sigil” 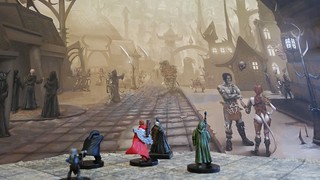 Catch up with them on “Lost in Sigil”

Lost in Sigil The Sphinx's Market

The Infinite Staircase The Ivy Base

The Temple of Selûne I have a feeling we're not in Punjar anymore!