Revoltion in the Raider's Camp

Chapter 2 of The Hoard of the Dragon Queen

To start this storyline, start here. 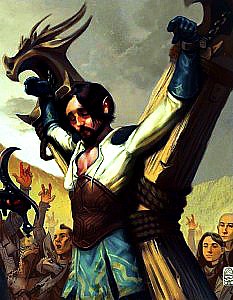 Hoard of the Dragon Queen: Chapter 2

Revolution in the Raider’s Camp

The raiding of Greenest is over, with the raiders leaving with their pillage southward.

After some rest, Governor Nighthill requests that the group follow the raiders retreat, and find what has become of the dozen or so missing citizens, and the townsfolk’s sizable treasures. And Father Waladra has more to share…

“Leosin has been investigating these raiders for months. I fear that he might have tried to infiltrate their group when they retreated, or worse, was captured and carried away as a prisoner. No one understands these bandits better than he does, and his knowledge will be invaluable against them. When you find their camp, please look for any sign that Leosin is there. One of my brothers has already departed for Berdusk to bring back help, but it will be many days before help arrives. Anything you can do before then would be a godsend.”

So the party sets out, with some captured enemy clothing and weapons as camouflage. The follow the raiders tracks south and soon encounter a group of stragglers. 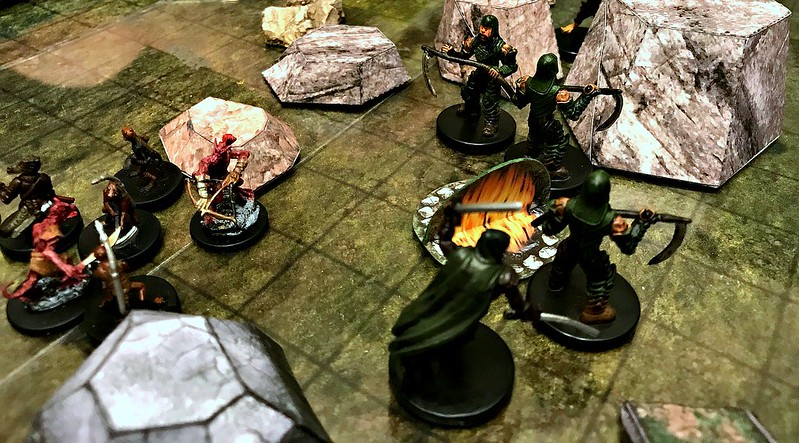 As the party sneaks up into potential attack position, Lady Oskendorser, now dressed as a Dragon Cult raider begins a dialog, acting as if she has been stranded away from her main group.

She notes that there is no love-lost between the bossy human members of the caravan and the wish-we-weren’t here kobolds. 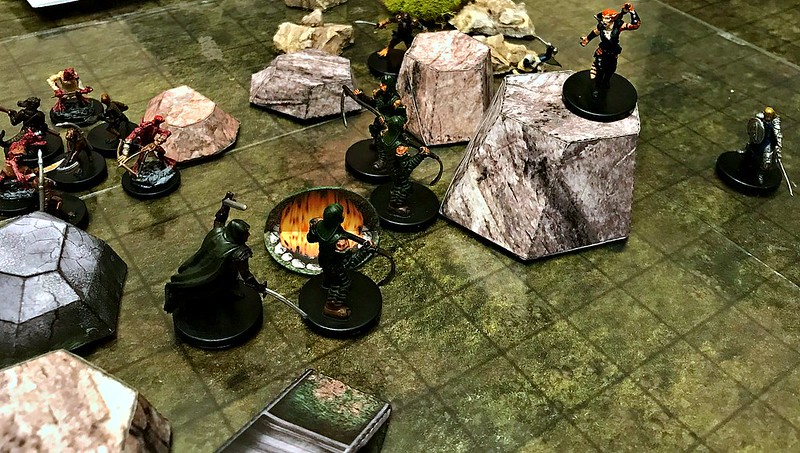 The party leaps and in slays the humans near the fire, catching them by surprise.

And Lady Oskendorser shouts “Victory for Tiamat! Victory for her true children.” Her allies realize that they should end the attack as if they were working for HER. 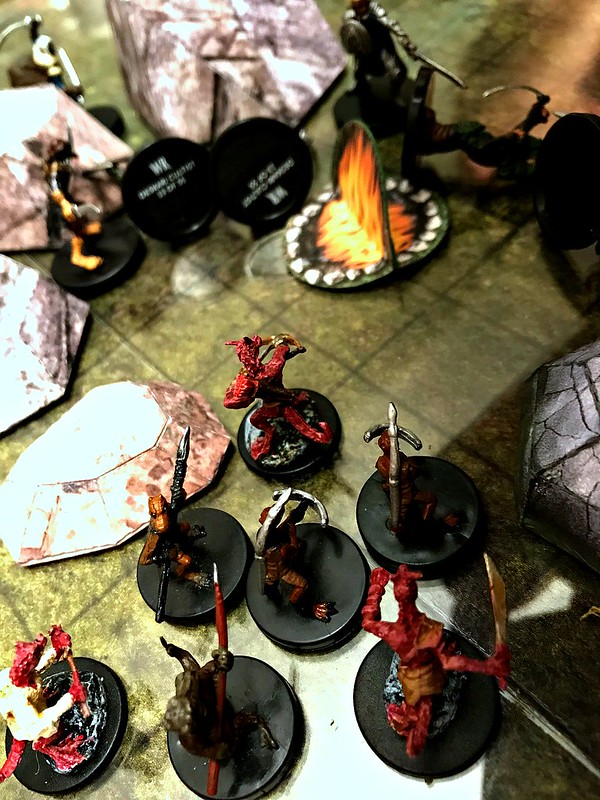 And the kobold minions accept the ruse: Lady Oskendorser leads a rogue band and has power over the humans! They ask to join her.

Of course, internally our favorite Kobold Paladin begins to have some internal struggle with using the name of her patron’s sworn enemy, but she reasons that Bahamut would forgive it given the ends. 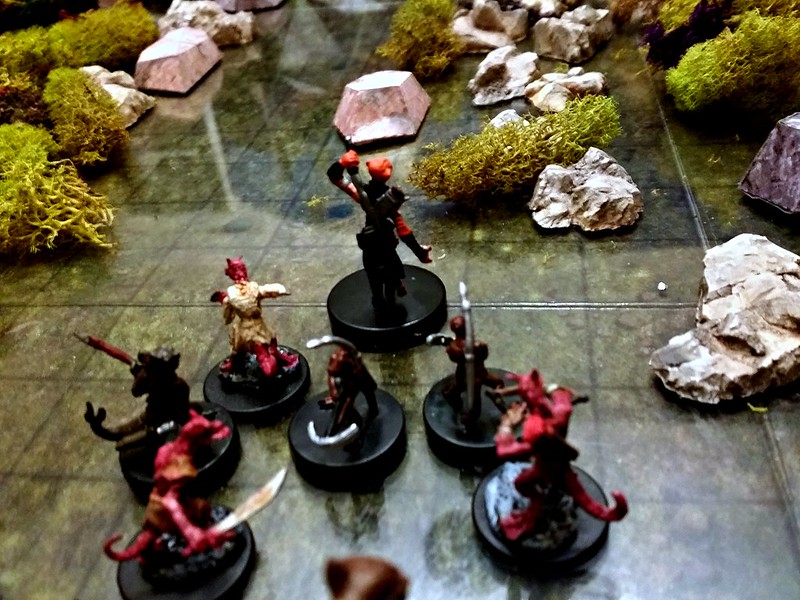 They tell her of the next checkpoint – the rear guard – and where they will be hidden. 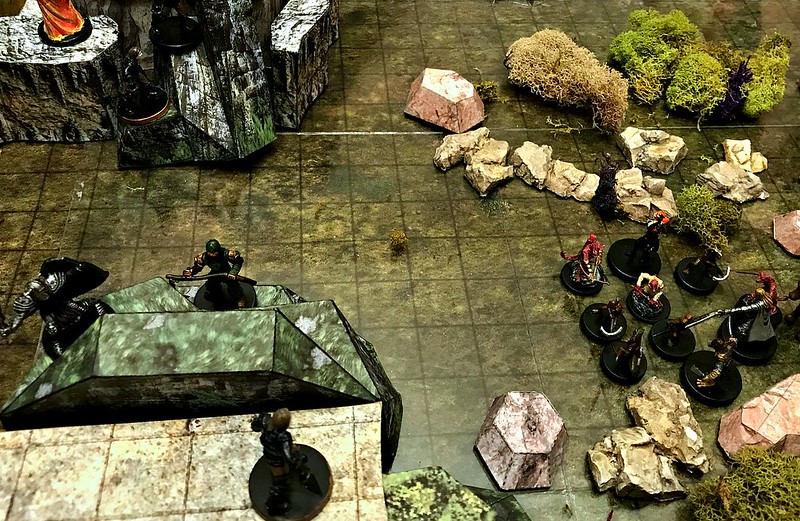 As they approach the choke point, they can just make out the hidden positions of the rear guard. Hitting this point without help would have been very dangerous. 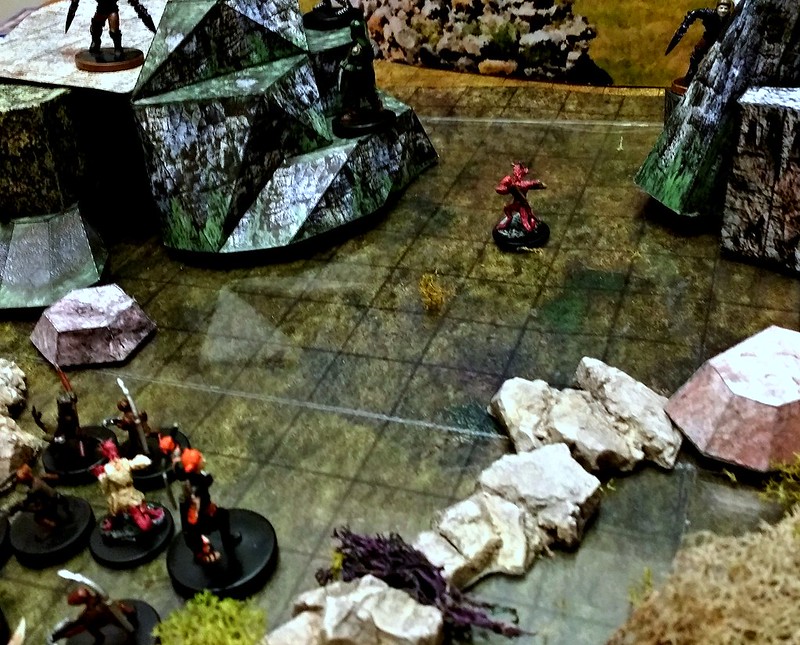 A voice yells out “Approach and give the password!”

Lady Oskendorser came to know one of her new minions by name during the walk for the last few hours, “Ratchet, please step forward and give the password. It should be one of us.” 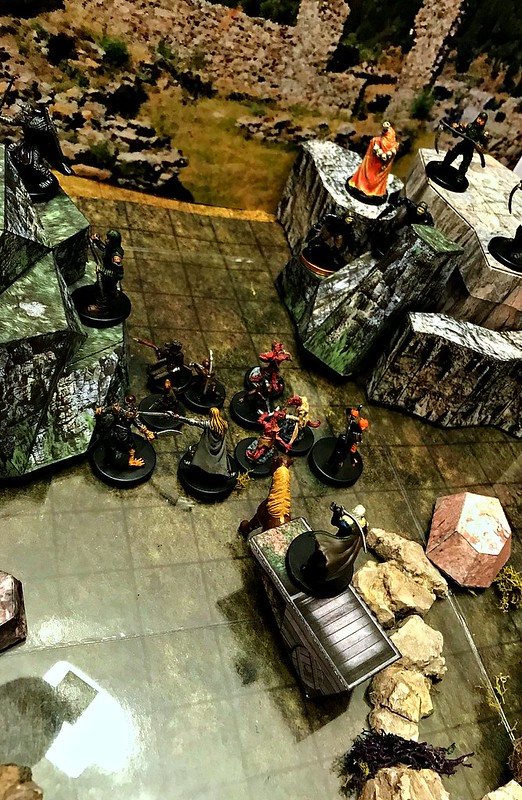 And so the group + 6 kobolds passes without incident.

Just before sundown, they arrive at the bandit campground. 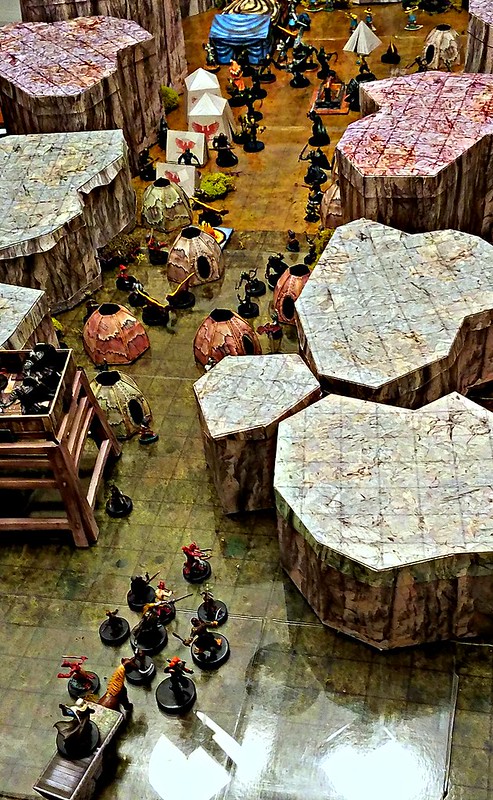 The cultists have set up their camp in the hollow of a rocky plateau that’s shaped roughly like a horseshoe. The lower portion of the plateau rises gently from the surrounding land, but it quickly steepen’s and ascends to a height of 150 feet above the landscape. Boulders form jumbled heaps at the bases of the cliffs. The level shelves and top of the plateau are covered in long grass, and brush and scrubby trees grow in patches.

The lowest end is inhabited mostly by Kobolds, and the higher ground is mostly human tents – and the command tent. 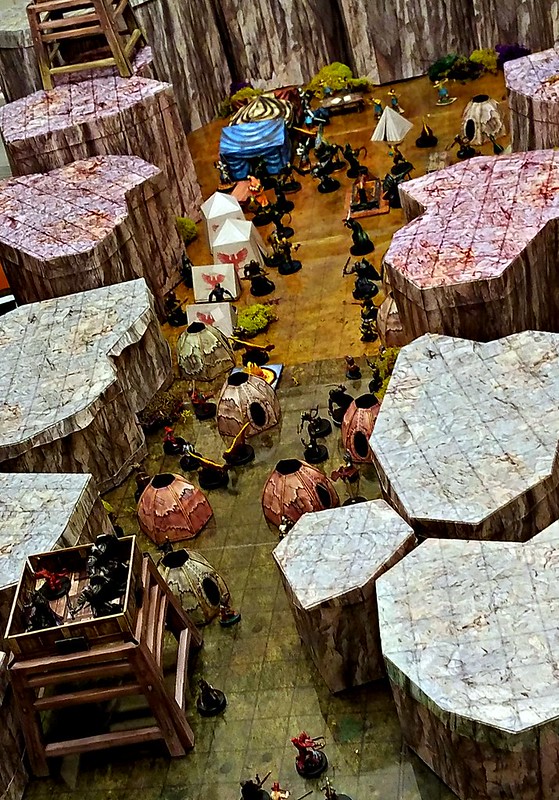 There are two guard towers – again the first/lowest one is manned by kobolds, and the higher by human soldiers.

The cart and horse are left outside the camp (by command from the Kobold tower). 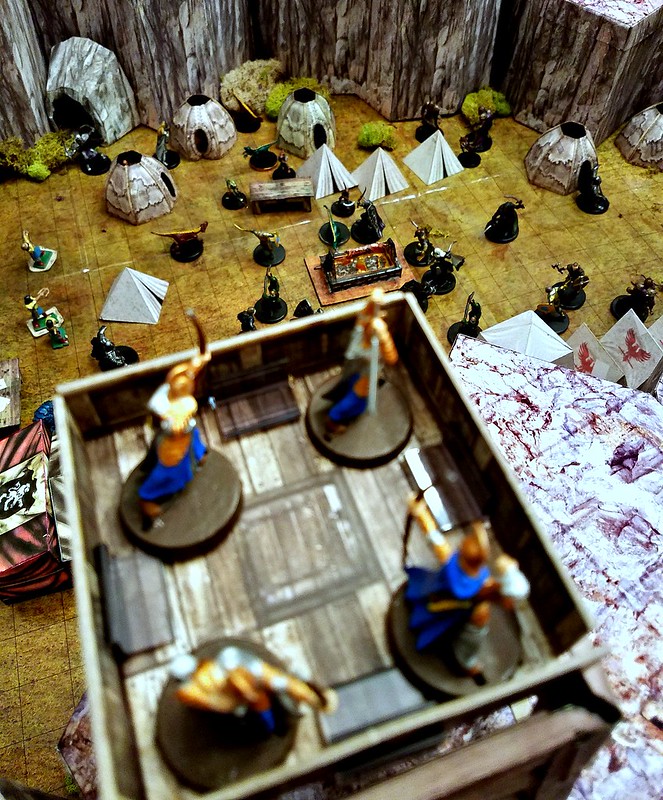 Lady Oskendorser, with some prodding from the fighter Osfyr and Uvan – feeds back on the obvious Kobold discontent.
“Why aren’t we, the true servants of Tiamat leading this raiding camp?” Ratchet gathers some other trustworthy kin.
Ratchet:“The cave with the Dragon eggs is up there! Near the humans. Though we guard it, we are always bossed around by them.”

L.O.: “What do you want to do? We should do it tonight while everyone is still relaxing after the raid.”

Ratchet: “Leave that to us, good lady. Let me make sure every one of us that can be trusted is ready. We’ll deal with any appeasers as is right.”

L.O.: “OK, meet me by the big fire in the center of camp just after nightfall.”

With a few hours to till then, Jah-Quatt transforms into a spider and moves along the cliff edges exploring.

She eventually finds the cave – and after a brief encounter with a guard who is really afraid of spiders that saw here out of the corner of his eye, she clims down into the cave and explores for awhile. 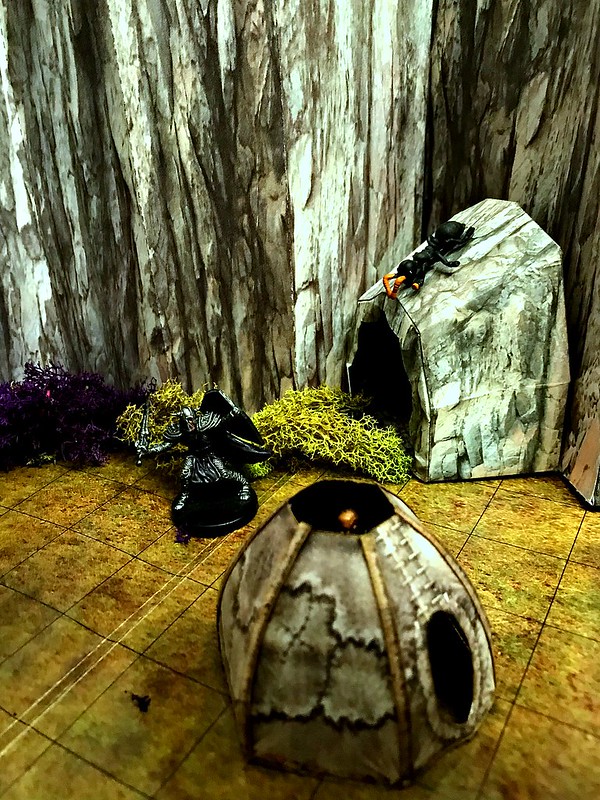 Party members split up and wander around the camp, posing as raiders, learning [plot details redacted].

And most importantly, when they can see the far side of the camp, they find Leosin alone and exposed – tied to a cross. With personal guards.
Clearly a prisoner of interest. 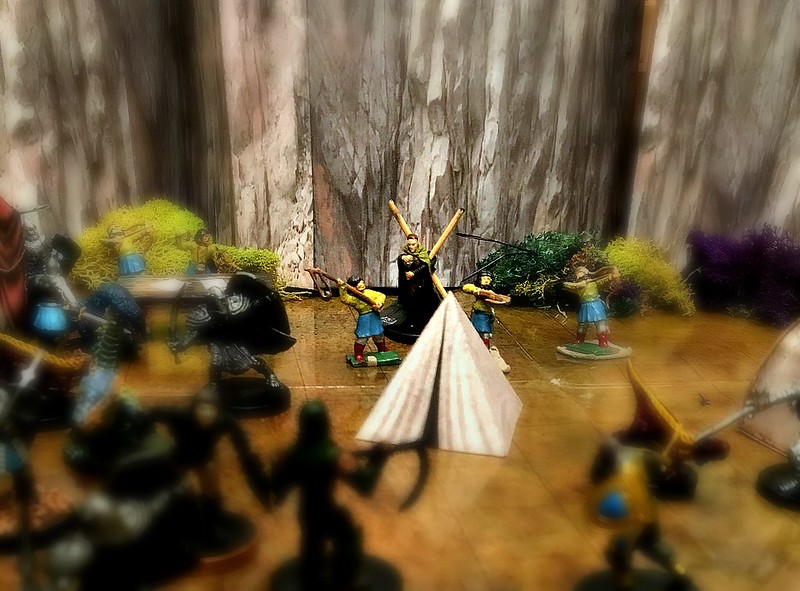 Just before the scheduled time, Uvan sneaks into position to attempt to take the human tower… 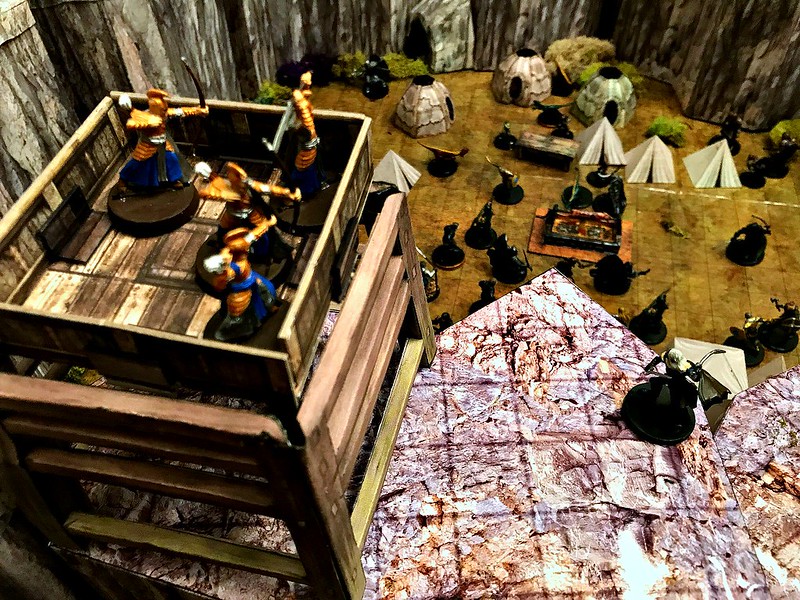 At the appointed time there are a large number of kobolds around the fire, all clearly impressed with Lady Oskendorser.
Ratchet points to a strange pile against the cliff wall, and then realizes these are the bodies her kin that were not loyal to a revolt.
“Just give the signal with both hands, milady. We know what to do.”

She stands up as straight as she can and slaps her chest on each side with each hand, then lifts them high into the air, with her fingers splayed in the pattern of the 5- heads of Tiamat. 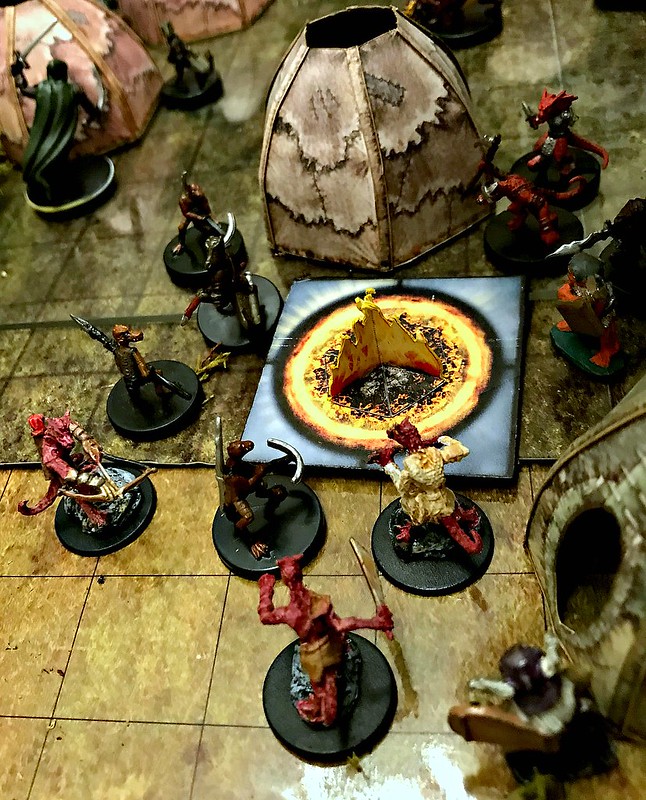 Then all hell broke loose. As every kobold charged, in pairs to their nearest human enemy. The kobold tower started shooting long range arrows… 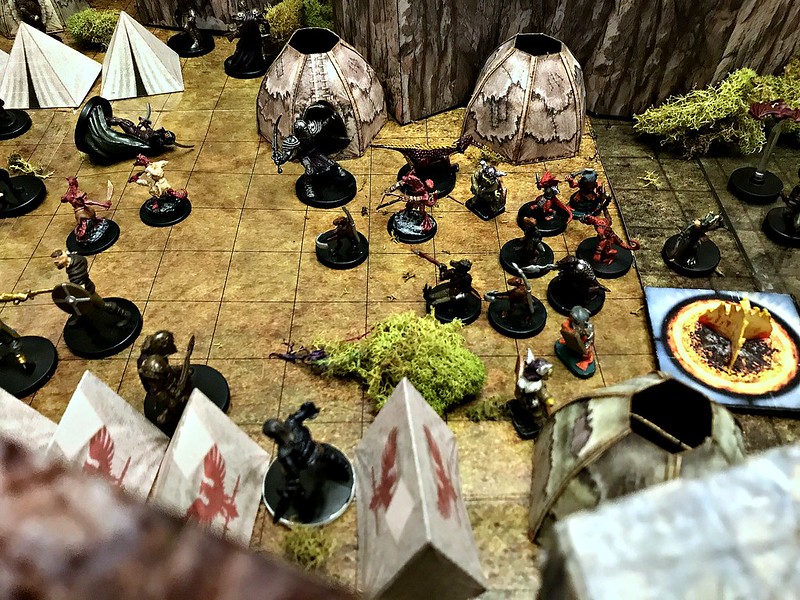 By then, Jah-Quatt had returned to Tabaxi form, and was trying to untie Leosin. “What are you doing? I was just about to learn their secret. This is very bad timing.”

Meanwhile, Uvan fires a burning arrow that the command tent, then takes a hit from the tower and falls to the ground, barely alive. 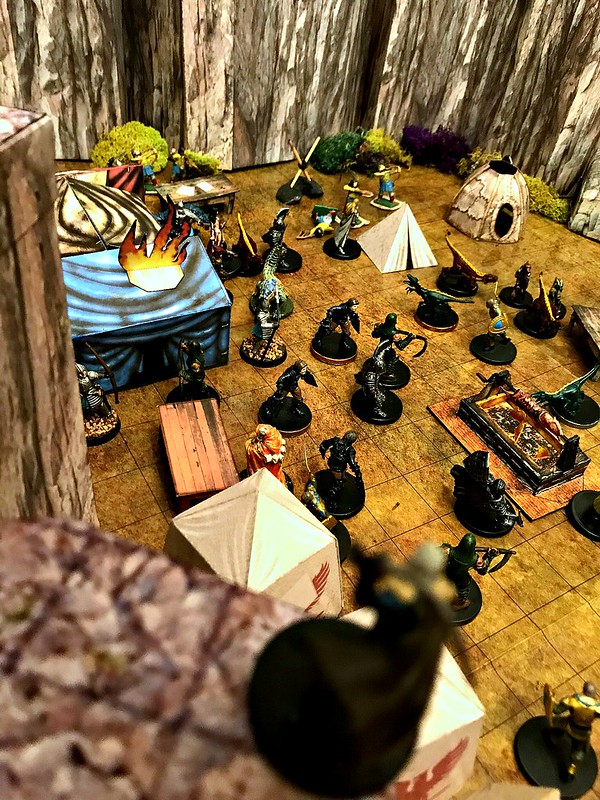 The first wave attacks from the kobolds is very effective, slaying dozens of humans in the first 30 seconds of battle. The smoke from the burning command tent is making the human tower guards less effective. 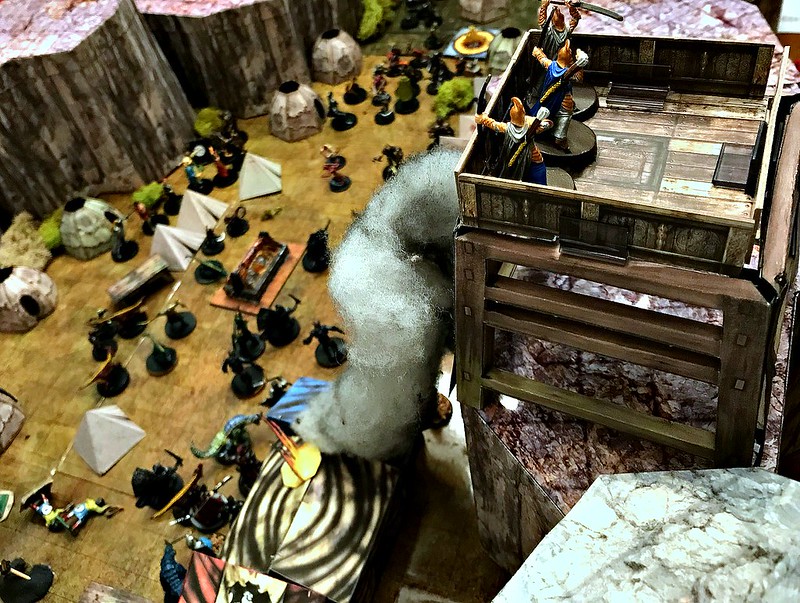 Osfyr works with Never (the Kenku) to free and help the villagers attempt an escape against the cliff walls. 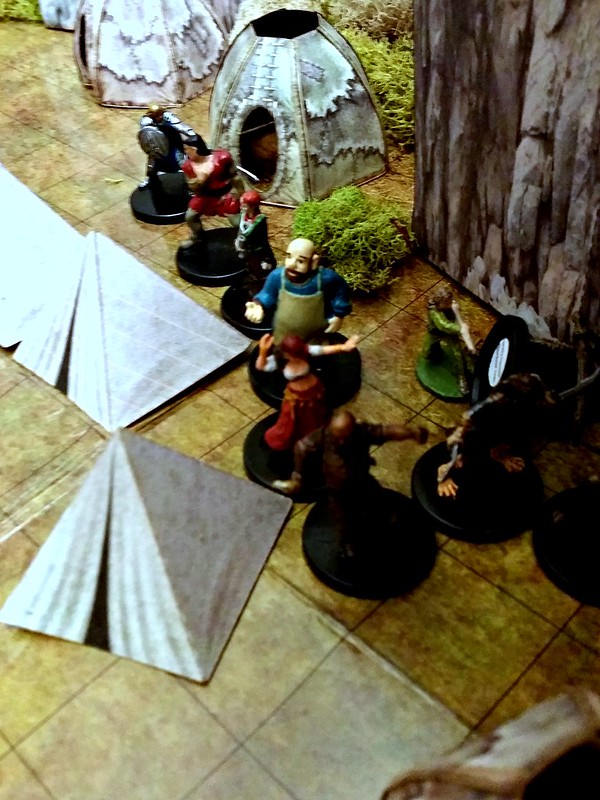 Leosin quickly realizes that this is the escape “plan” and holds on to the Tabaxi for dear life as she bolts on all fours attempting to dodge combats on both sides of her. 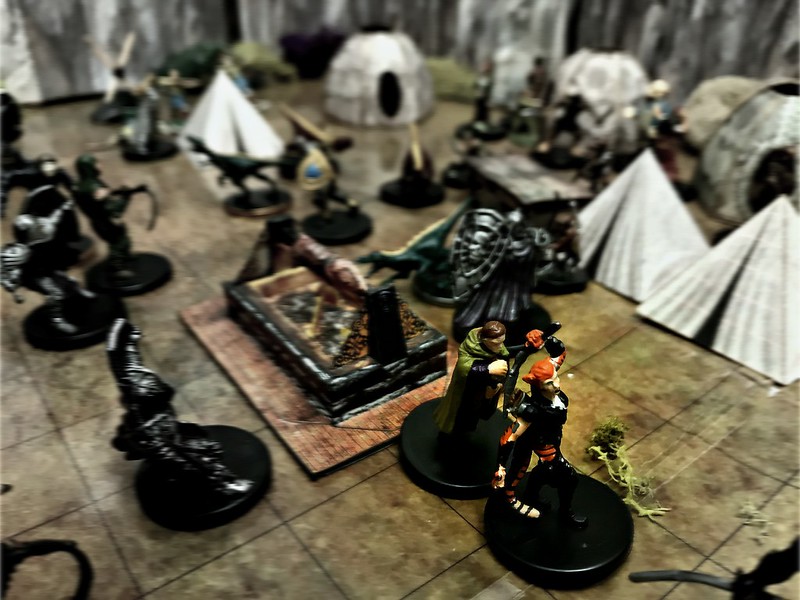 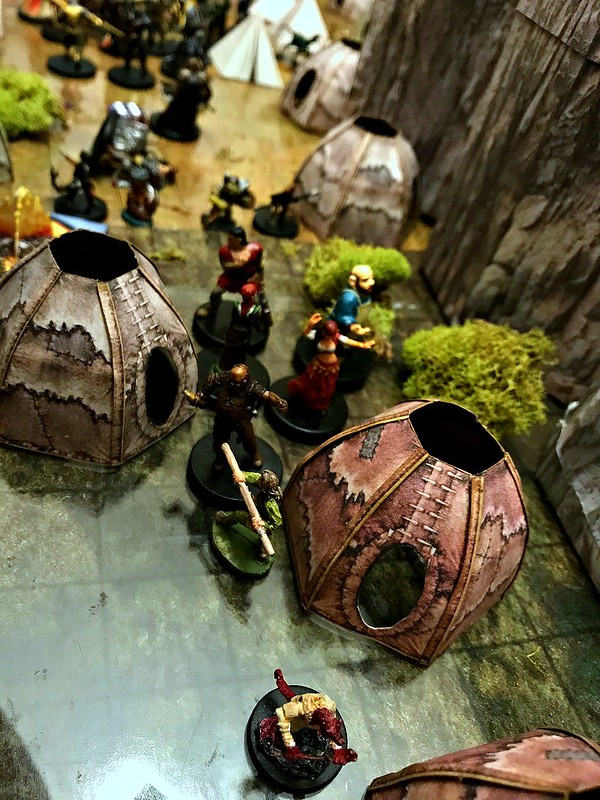 Within 45 seconds of the start of the attack, the leaders emerge from the command tents.
Langdedrosa Cyanwrath – the Half-Dragon that Jah-Quatt fought (and lost to) the night before, the short haired woman who’d marked them from he church, and a black-half-dragon with a wicked looking staff.

This was not looking good – and it rallied the humans – who were no taking Kobolds down twice as fast as their losses.

The black-half-dragon was able to use his staff to nearly slay Lady O where she stood – Uvan was able to get her out of danger. 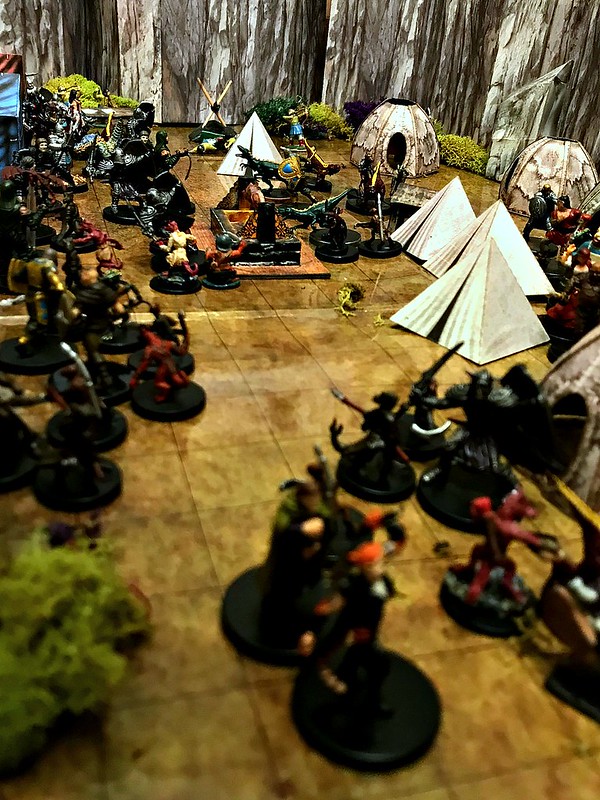 “This one is mine!” “I know you!” shouts Cyanwrath, obviously pointed at Jah-Quatt. He instantaneously appears in front of the Tabaxi, wanting to block her and her passenger.

“Didn’t I warn you? ‘Remember this before you decide to interfere with the plans of the Cult of the Dragon!’?”

“We need him. So now you die forever!”

But instead – a dozen nearby standing kobolds jump on Cyanwrath just after a volley of arrows from the Kobold tower hit their mark.

By the time the humans could pick off enough of the attackers, Cyanwrath was dead.

And the remaining Kobolds set up a line, backed by archers in the tower – to slow any advance.

She hailed them with the salute. 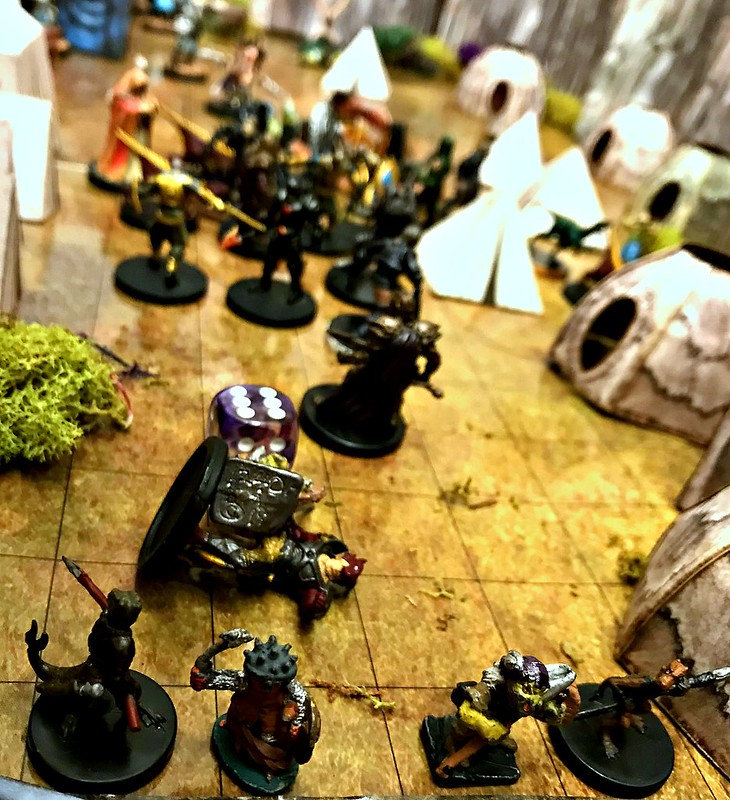 They provided enough cover for the party, villagers and Leosin to escape. Leosin, cursing under his breath. 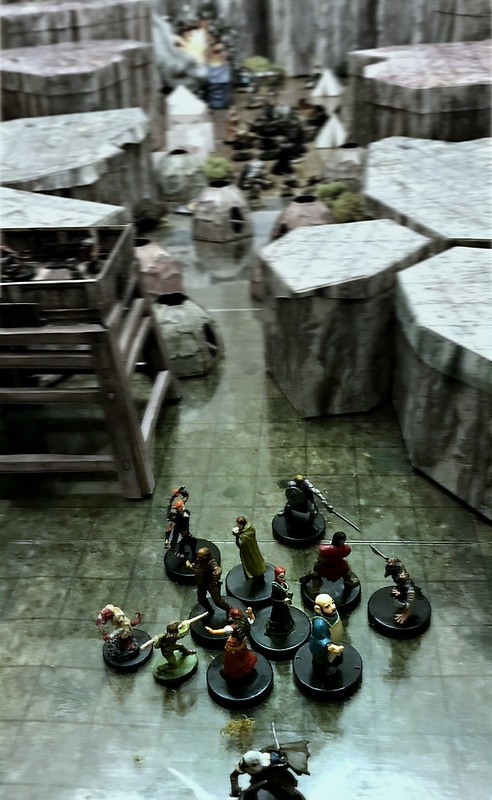 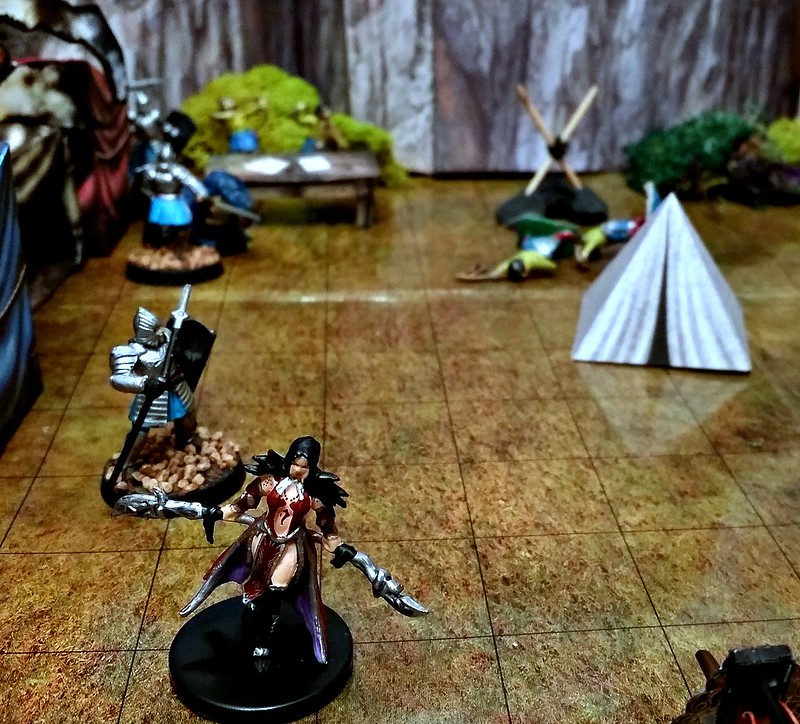 Again, our heroes rescue the villagers and finally meet their contact. But, at what cost?

And why is Leosin so irritated with them?

Find out next time in: “Broken Eggs”

The Cities of the Sword Coast - To Baldur's Gate Hoard of the Dragon Queen, Chapter 4; On The Road

The Longest Night Hoard of the Dragon Queen, Chapter 1, Part 3

Defenders of Greenest Hoard of the Dragon Queen, Chapter 1, Part 2