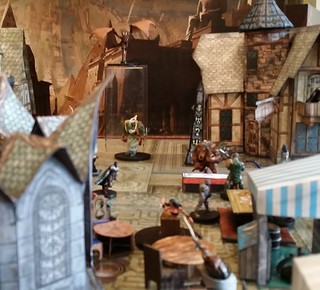 The Way to Sigil

Having finding the gate to the Mirrored library at the Staircase of Desolation destroyed by an Abyssal hulk, Team Beholder returned to Planeswalker’s Guild HQ to report and find out if there is another way.

After encountering and defeating a new enemy: The Githyanki, the Leader of the PW Guild suggested that they might be able to locate the legendary sword Pathfinder which was supposed to give the wearer knowledge of the shortest route through the planes to any object or location.

The sword’s last owner’s location was purported to be in one of the Lady of Pain’s Mazes in Sigil, the City of Doors.

Pvel, a female Svirfneblin Cleric Planeswalker agrees to lead the Irregulars to Sigil and accompany them as far as they wish to go – even all the way to Timeresh. 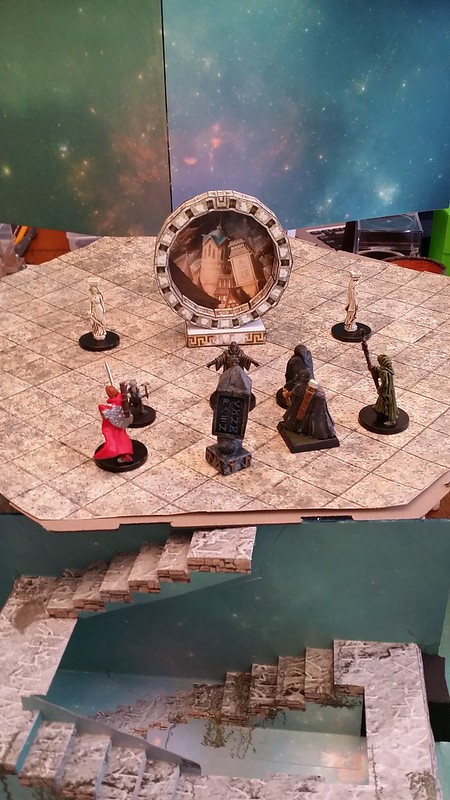 Upon passage through the Sigl Gate, she says “Shopping time! We’re going to the Sphinx’s market. Stay close.” 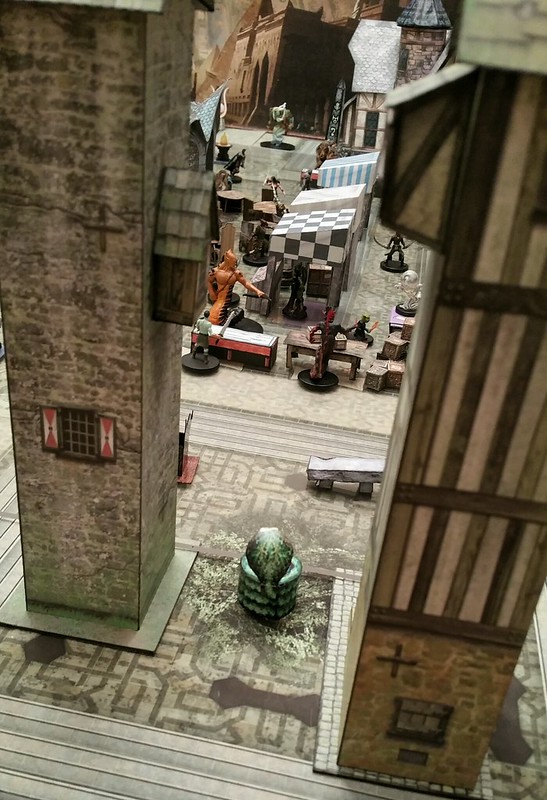 The market is the most amazing thing they’ve ever seen… Filled with stalls with strange sights, sounds, flavors and creatures. In fact, there is not another human in eyesight. 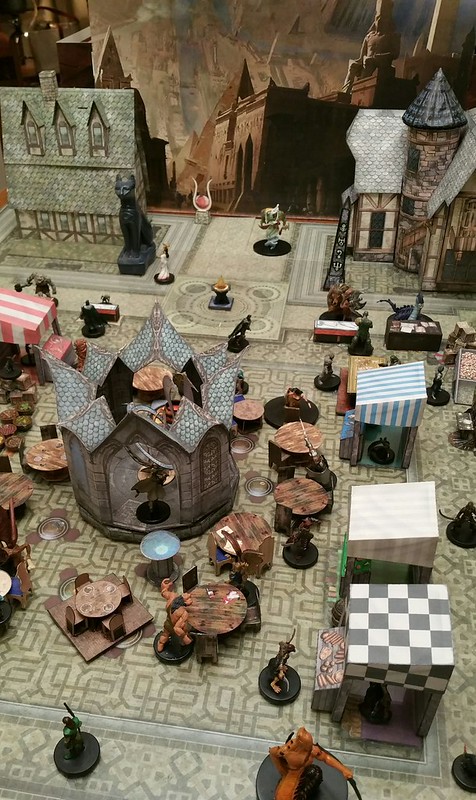 “They gave me favor tokens to spend on each of you as a reward for your assistance with the threat to the guild and the stair. You may select any one item from the market. Take your time, there’s lots to see. Feel free to ask questions – fear of the Lady keeps any serious crime at bay. Oh yeah, don’t start any fights. You won’t like what happens if you do.”

Gael: “I have no interest in more magic gear. You may save the favor.”

Pvel: “Umm. OK. I’ll save it for you. If you ever want it anywhere on the planes, just ask.” 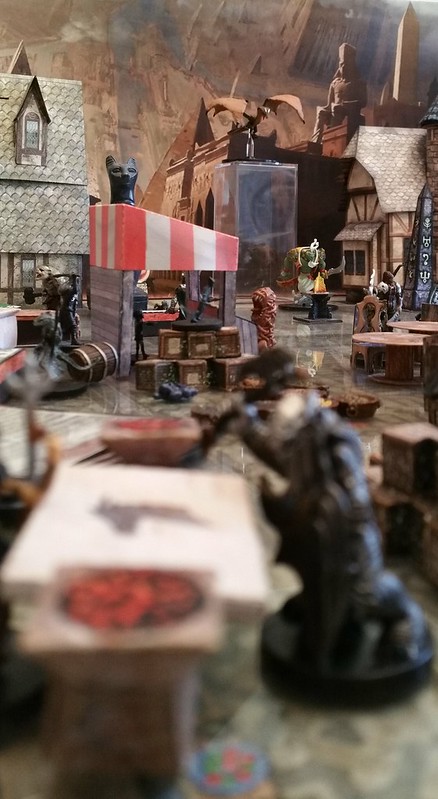 Barton becomes fascinated by a game of Sigisticks – a cross between a shell-game and fortune sticks. The Ogre-ish one is running the game, and the Harpy has been losing. 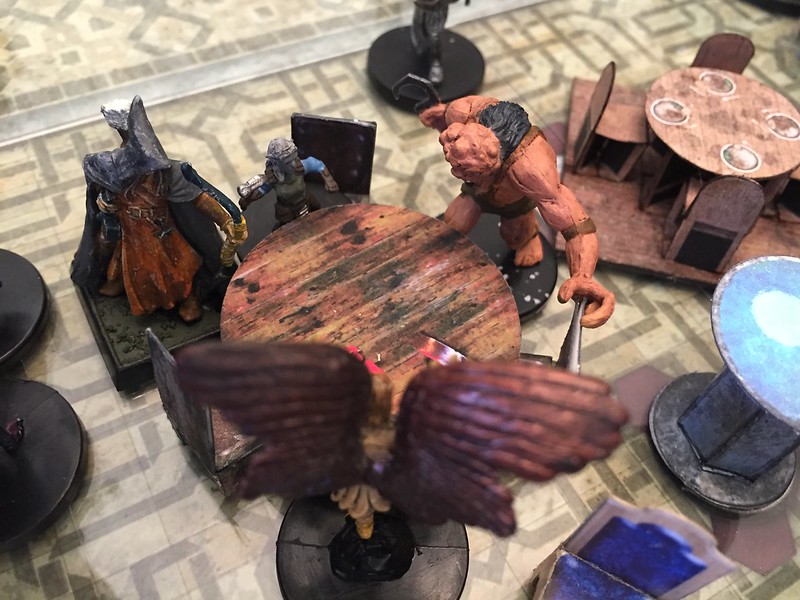 Pvel urges him to be cautious and observe, he can see the game is rigged, but isn’t sure how. Barton’s attempts to rebalance the scales are detected, and almost start a fight, when he shouts “No more cheating! Double or nothing!” This calms the shellmaster down and he casts the sticks one more time – not noticing that Gael has come close by and changes one of the sticks to appear to have winning numbers on all sides…
This confuses the fraudulent table runner, and he blows his cover – beating a hasty retreat. The Harpy ends up flying away with all the money.

Abani notices that the market, though incredibly diverse, has a disproportionate number of Githyanki in strategic positions to observe everything in the market. She’s pretty sure that their party is the focus of their observations. 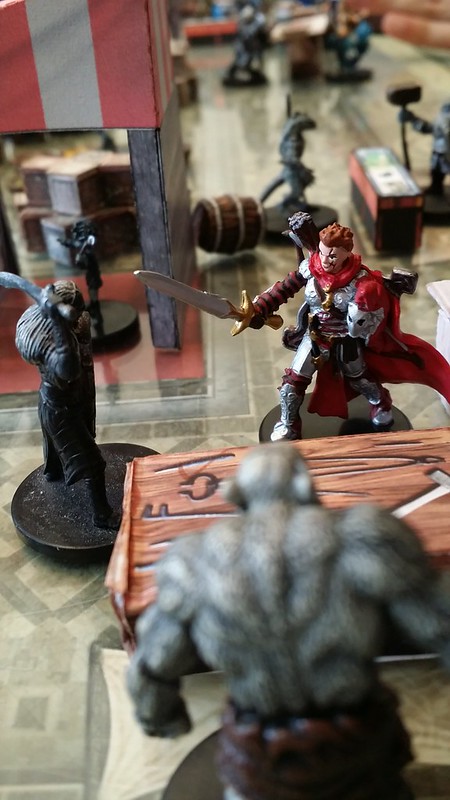 “They won’t attack openly…” reminds the deep gnome. “The reprisal would be swift and sure. We should just be very careful when we leave.”

Gael can not resist the dais with the Androsphinx figure and the strange spinning hollow sphere in the center of the market. 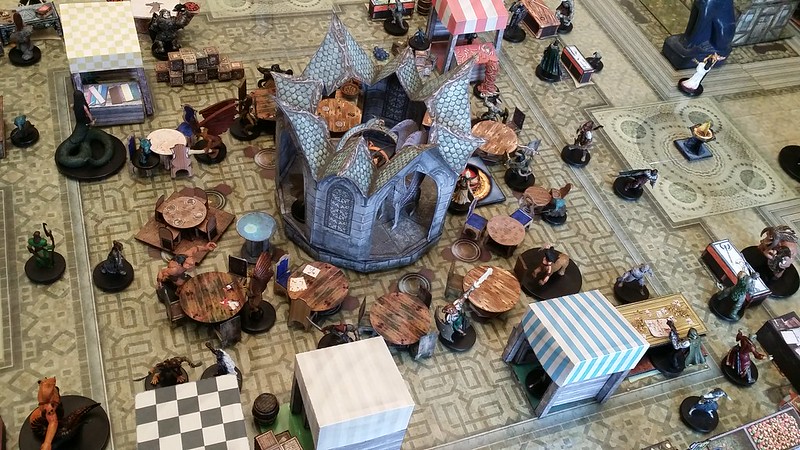 He steps inside – to be surprise that the large sphinx moves and speaks with a deep voice: “Welcome Gael. We have been waiting for you.” 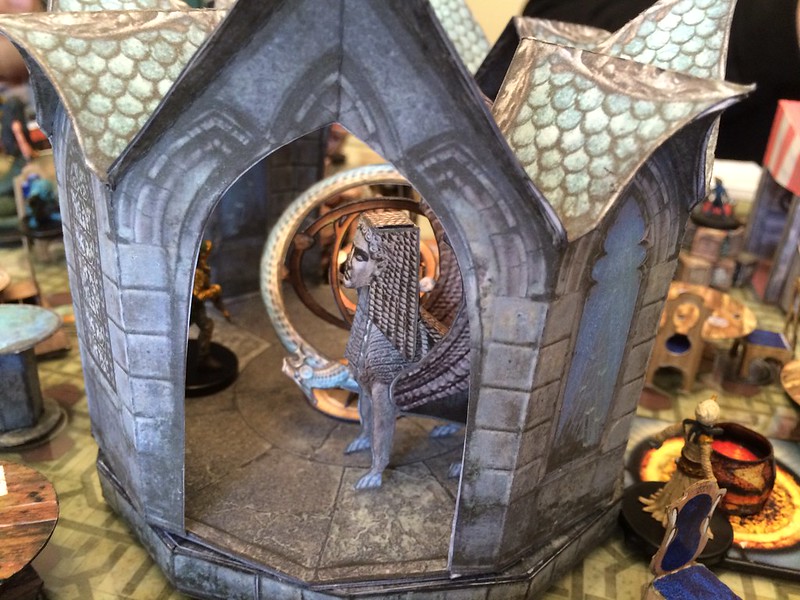 “We know you all. What do you see before you?” indicating the armillary sphere, which shows many shapes moving within a floating round space. 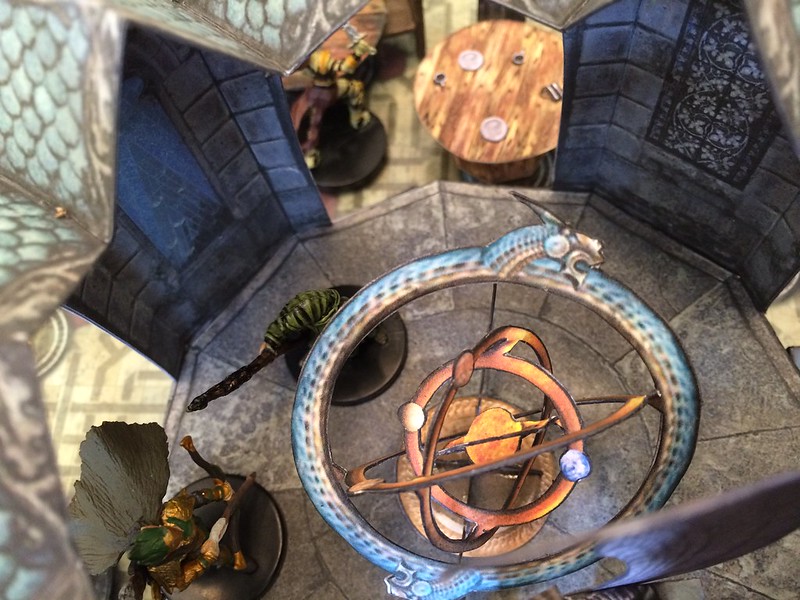 “What is it I’m looking at? It’s fantastic.”

Pvel jumps onto the platform speaking quietly:“That’s interesting, I knew they could move like an inch a week, but I’d never seen him actually talk to anyone. Though you can’t hear it outside this building.”

“It is the universe. What do you see?” 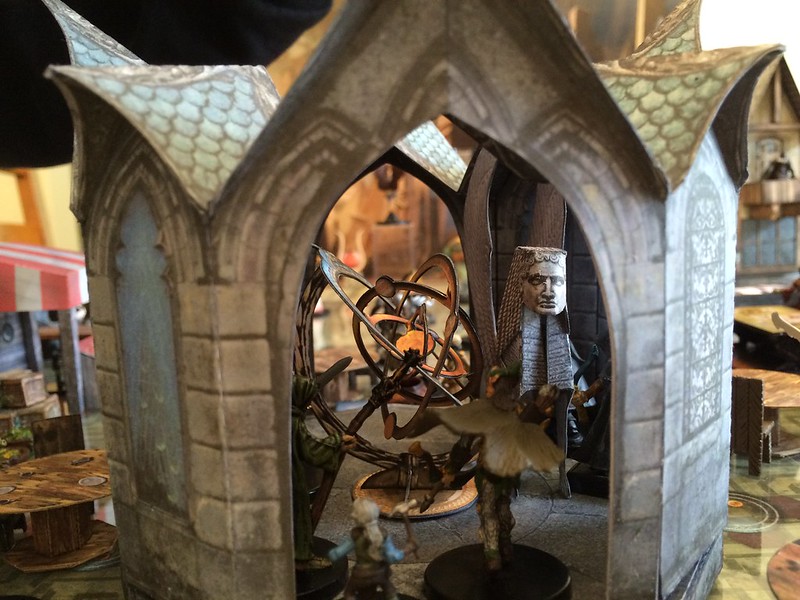 “Is that blue shape our home? I see two nearly identical shapes connected closely, one is black, the other is green. The green one seems to be broken – or wait, it is barely connected by a thin thread and seems to be blowing in the wind, ready to detach. That’s the Feywild, right? But why does is the model damaged? Is it to represent the Sundering?”

The sphinx answers slowly: “You understand, and you do not. What is a model? This is the universe.”

Abruptly it shifts topic – “at this point the others join us.”

Looking outward from the cloister, it becomes obivious that just about everyone in the center of the market is fascinated to see the interaction going on. Though, when other’s try to join, the are prevented by some force stepping up onto the platform.

As predicted, Abani, Barton, and Quinn join the rest and the Sphinx continues:

“The Sundering is impossible. The destruction of the Staircase is impossible. Chaos is destroying order, and with it Life itself. And Chaos is eliminating our certainty. Your group has a role to play in stablizing the universe. We knew you’d be coming, but do not know how your story ends. This disturbs us. We trust only knowledge, so you must complete your mission to Timeresh. Knowledge will reveal the plans of chaos. 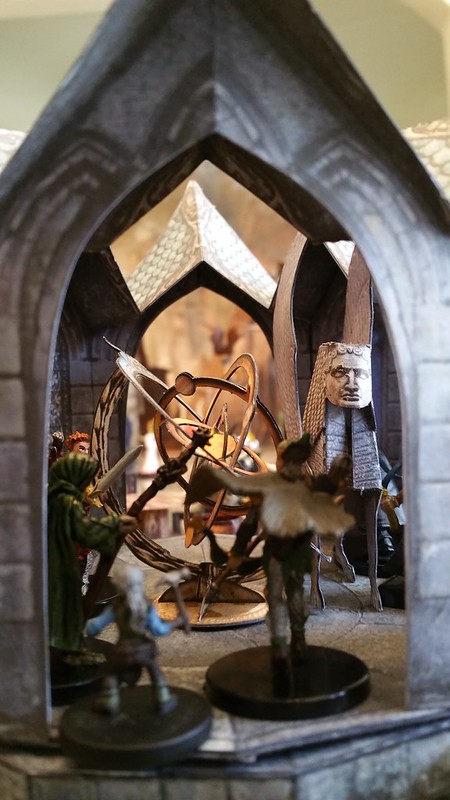 So – You must find Vartus Timlin. Use Pathfinder to continue to Timeresh.

The entrance to his prison-maze is in The Hive, past the Gatehouse. Turn left at the Inn of the Roaring Balor. There’s a small door set into the inn’s wall. The key is a golden rose, dipped in honey – you can buy one at this very market. Once you have Pathfinder, you can exit the courtyard: Take the Lady’s right hand going as far as you can, staying along the wall to your right. Once you hit a blind, no matter how small, look for a secret door. You’ll need the exit key."

Pvel: “Of course, there’s another key. What is it.”

Sphinx: “We have only a riddle as an answer for you: ‘That for which you hunger, is the key for your salvation.’” We know that you will solve this."

“We are sorry that so many of our enemies know that we have met. Though we can not protect you, but can grant you our blessings!” – with that the entire center of the chamber fills with a gold light, flooding out to the entire market – and visible from a full third of Sigil (given that the entire city faces inward upon itself.) 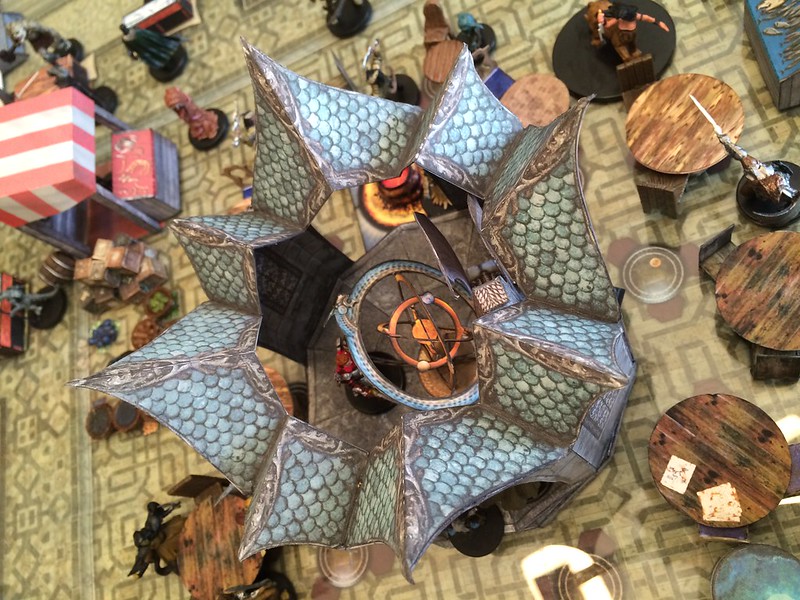 Abani: “We’d best hurry and get that rose and get out of here, given the amount of attention we’ve drawn to ourselves.”’

And stepping out of the cloister, they once again can hear the sounds of the surrounding city and market.

Pvel tells them “Get ready to move, fast.” and as they get thier gear adjusted for travel, Quinn has already slipped over to the florist and gathered the rose and honey. 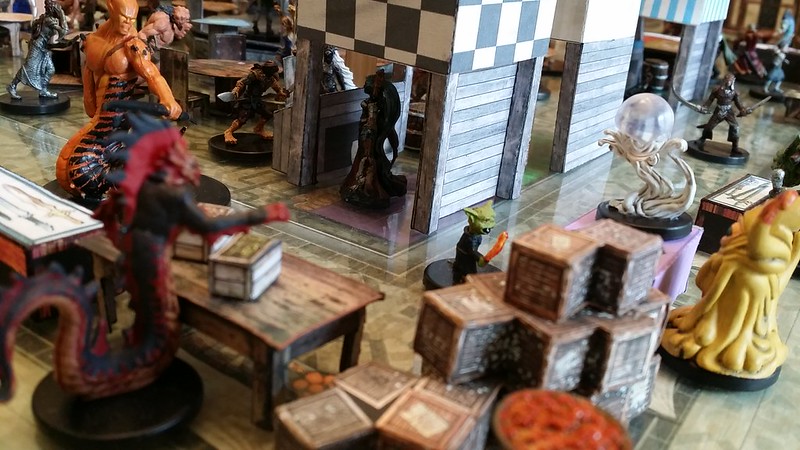 “Follow me closely, and don’t spread out, and don’t talk. It’s going to be a footrace and we don’t want to leak any information. <whispering> We’re taking a special route.” 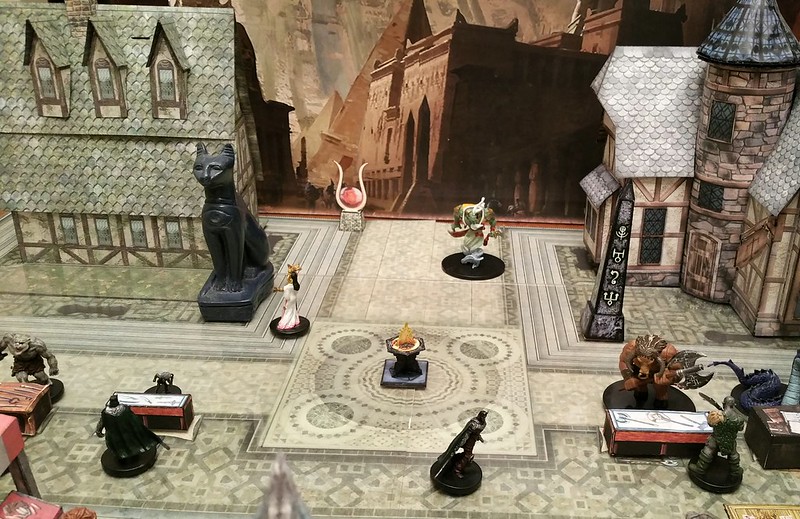 Turns out that Pvel knows another impossible thing: a gate that leads from one part of the city to another – and so she leads them that way (away from The Hive) and sure enough both the Githyanki and a group of Drow are shadowing them, hoping to find out where they are headed.

The blessing turned out to be good luck at every turn [5e-style advatage on all rolls for a limited time] Team Beholder was able to lose both groups by sneaking through a small portal when out of sight of their persuers.

Before long, they are just past the Roaring Balor – pouring honey on the golden rose, and entring Vartus Timlin’s prison: The Lady’s Maze 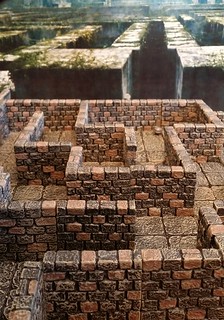 Next Time: Will they escape from The Lady’s Maze with Pathfinder in hand?

The Staircase of Desolation The Infinite Staircase, cont.

The Infinite Staircase The Ivy Base