Dead in the Eye

Stonefang vanished as Florynsael completed the ritual to trap the Titan inside Duggan of the Shadowed Chain Dwarf Clan.

Saving Duggan and the Citidel

“That was close! There is only one dwarf left!” sighed Shute. “That’s not going to be enough to protect the Citadel, or the pass through the mountains.”

“Uuunnhhh! AAARGH! Help….” – Duggan’s great pain is evident as he lies on the table. 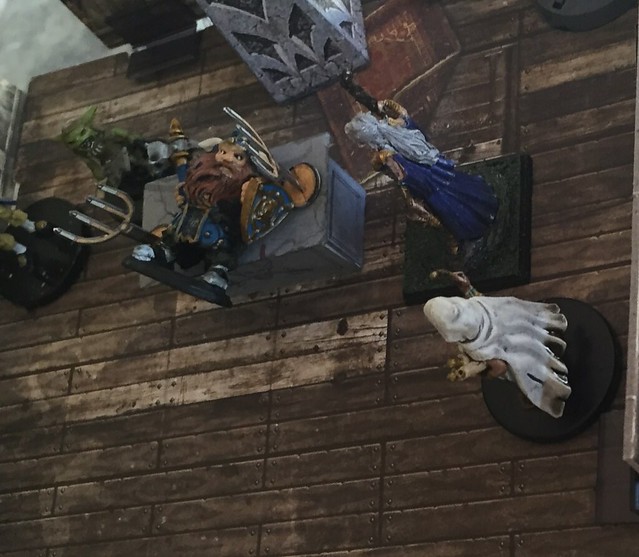 His face shifts between flesh and stone. “That must be excruciating to get a dwarf to complain…”, notes Nostalgio, who (with Edryd) has just joined them on the roof and starts a Song of Succor in an attempt to calm the new vessel.

‘’His body is rejecting the Titan! This is bad. We don’t have the resources we need to stabilize him here, and if he releases the Titan now, we’ll all be crushed. Agüero, help be get him to his feet. Edryd, call Charlie, quickly!’’

The connection is quickly established and Edryd reports: “Charlie, the dwarves were all but wiped out. And the envesseling succeeded, but the Titan resists putting Duggan at serious risk and we don’t have the correct resources here to help him.We may only have hours or even just minutes.”

Florynsael: “I think I have a solution – to teleport us to the Pillar Room at Cleoragard. Please let Cleora know we are coming!”

Charlie replies ‘’Just you and Duggan – the rest of you need to get to Timbervale as quickly as possible, ur-Thane Glintshield is there with his men – they can take over guarding the pass. Close the gate as you pass through, just to be safe. I’ll call Padraig and have them guard the pass from that side for now.’’

Florynsael takes the black cube and stows it, then Duggan’s weight on her left shoulder as she summons the portal and steps through – all of it disappearing in a flash!

Leaving plenty of provisions for the one remaining dwarf guarding the Citadel to hold out until reinforcements arrive, they charge off down through the pass. As instructed they close the gate and make haste to Timbervale.

As they arrive the next day, Charlie calls “Stonefang’s release shows that Elven protections are weak. There’s been recent reports of lots of openings to other planes – and one came through last night in your area. Expect a messenger to meet you in Timbervale soon. No word from Florynsael yet…”

“Such heroism is unknown, even amongst the dwarves of olde. Duggan’s name name shall be a song, and a song not forgotten as I, as Ur-Thane rename the pass before us as “Duggan’s Pass”. No longer will it bear the name of the evil being it imprisoned – it shall be known for the one dwarf who chose to stand against it every single day of his remaining life! We are off to protect the pass! Along with Duggan, your names will not be forgotten."

The dwarvish heroes unit was on it’s way within the hour.

Dead in the Eye

Shute waited at the stables, and was the one who first encountered the expected messenger – he rode it on a depleted horse…“We’ve got a Beholder trapped in a cave, and we’ve been told you can help! Mount up and follow me…”

Following the cliff, they eventually come to a rise near a cave lower in the face… 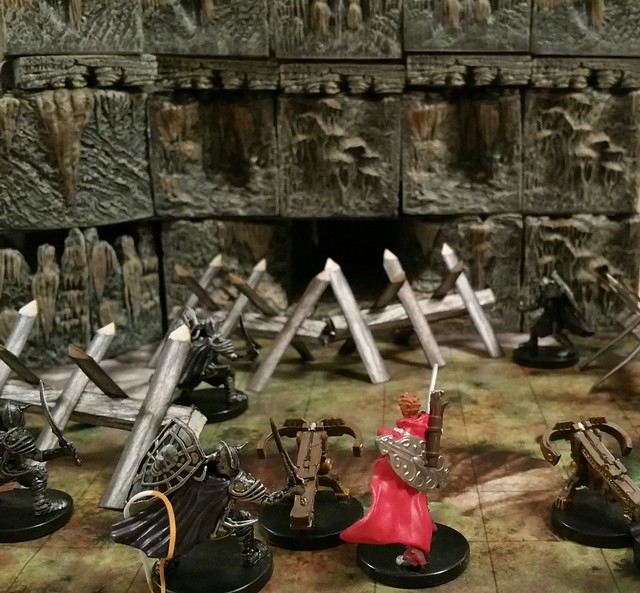 They meet with Araka Logan of the Black Arrows who’ve been tracking Omaranthax, a Beholder that has been wreaking havoc, killing hurdreds in search of – and then stealing – hadrum (distilled dragon’s blood.) For what purpose is currently unknown. She quips “It’s a little strange we were able to trap it here – there was plenty of open space to make an escape. No matter, it’s a mistake we were keen to exploit. Unfortunately, our attacks have, so far been rebuffed. We’ve heard you have some experience with this kind of threat and might help us.”

Araka continues: “We need to understand why Omaranthax is stealing the hadrum, and so have these special manacles. If you can attach them when the creature is weak, then slay it, it will capture his spirit for an hour so that we can question it using a Speak with Dead ritual. Unfortunately, our cleric was slain in the last raid, so that seems useless.”

“M’lady – mayhap I shall assist? The ritual is ken to me. Parlay with the spirit through me.” It’s Shriaz? Yup. Turns out he’s a ritual caster (the Sisters at Asherton restored him completely, it seems.)

Araka: “Excellent. Here’s the Manacles. We’ll provide you all cover as you enter the cave…”

As our heroes approach the cave mouth, the barriers are temporarily moved aside. “Accursed Beholders – how many must we face ? … and this time without one of our mages? We must take care” cautions Edryd.

The first chamber was large and full nooks and crannies with strange malformed creatures laying in wait, and large swatches of strange luminous mushrooms that had various deleterious effects. 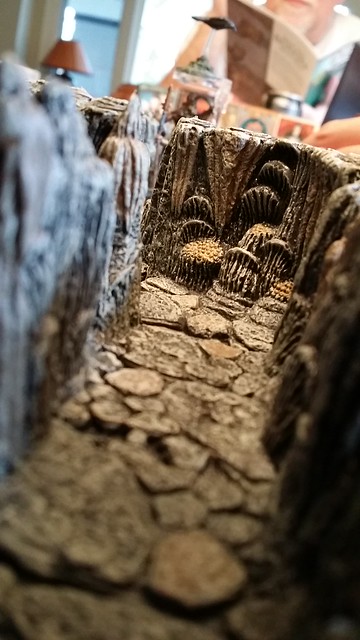 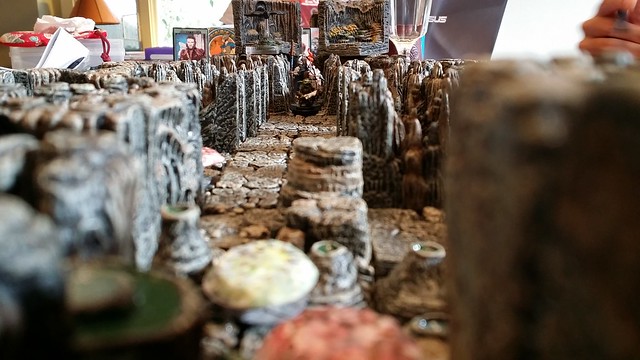 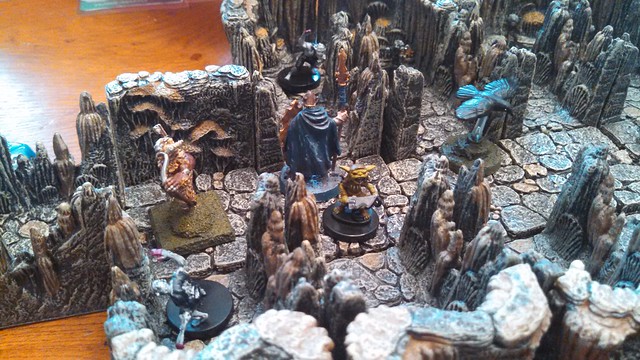 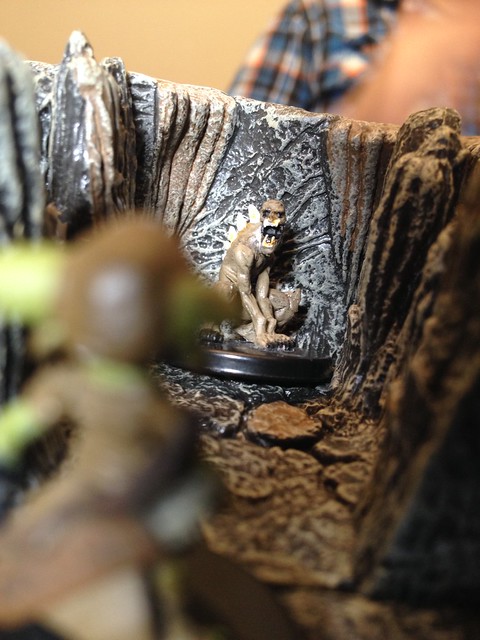 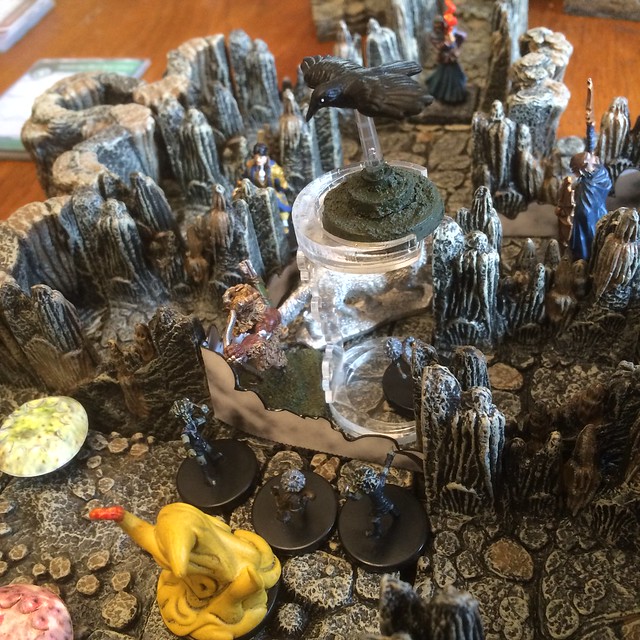 The heroes’ experience allowed for a quick and easy victory over these minions from the Far Realm.
Edryd: "I think the ‘shrooms show where Omaranthax has been… If we follow them, we’ll find the creature for sure!:

Next they encounter a twisty maze of passages… 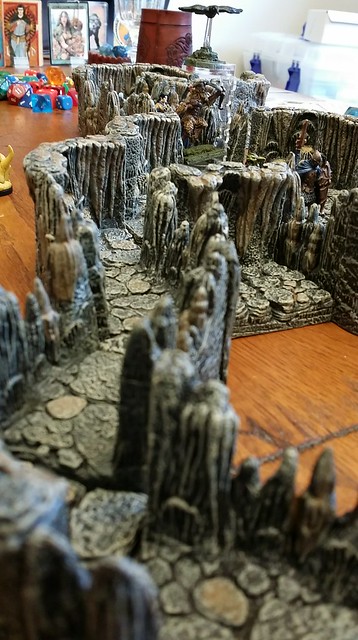 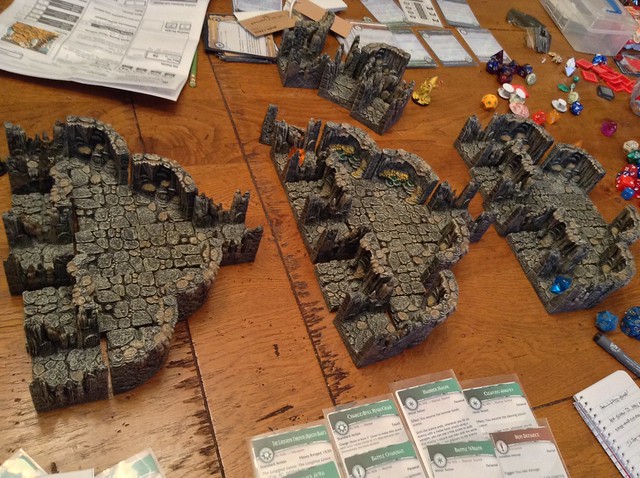 Fortunately, Shute knows about traps like these and quickly makes the rooms look un-alike by dropping objects.

After leaving the maze, they again pick up the trail of distorted mushrooms, and arrive in a huge chamber with stalagmites and stalagtites – near one of them is a LOT of blood, and a pile of loot. 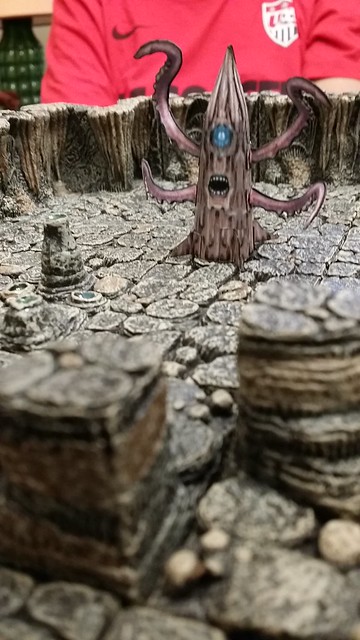 “That’s not a stalagmite, it’s a creature – watch out, it’s got really long tentacles.”

This observation wakes the Cave Roper. “WHO GOES THERE AND WHY SHOULDN’T I EAT YOU LIKE THE LAST ONES?”

Shute is quick to recognize that the Roper’s loot piles are carefully arranged, like someone who appreciates the finer things – she pipes up “We’re just passing through, chasing that nasty Beholder and it’s minions. If you let us go, I’ll give you this wonderful valuable fur rug – it’s about the right size for a wrap for you.”

The beholder reaches all the way across the room (50’!) and snatches it from Shute’s arms. It then wraps it around itself, making a loud noise that must be Roper purring. “IF YOU KILL THOSE THINGS, I WILL LET YOU GO BACK TOO.”

So they start hiking across the room… 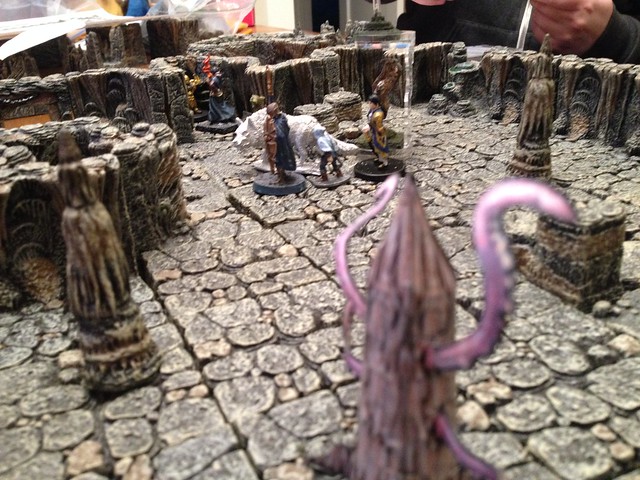 … only to find a single Black Arrow surviving. “We want this one to go back now, can she go back?” “MMMM HMMMM” So the party sends the rescued Black Arrow back to report to Araka. “If we should fail, the way is clear to Omaranthax. We will attach the manacles if we can.”

Next up is a very wide tunnel, but it’s clear which way the Beholder went… 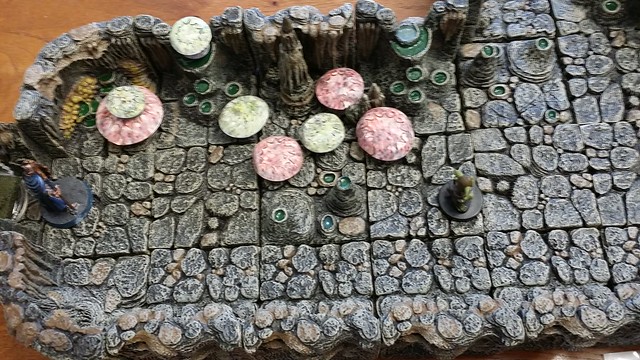 But they can’t resist looking down the other exit, where they find… 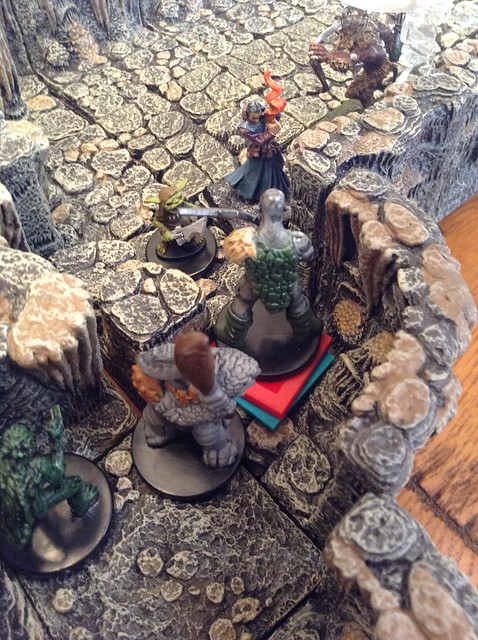 an Ambush (with the party split!) 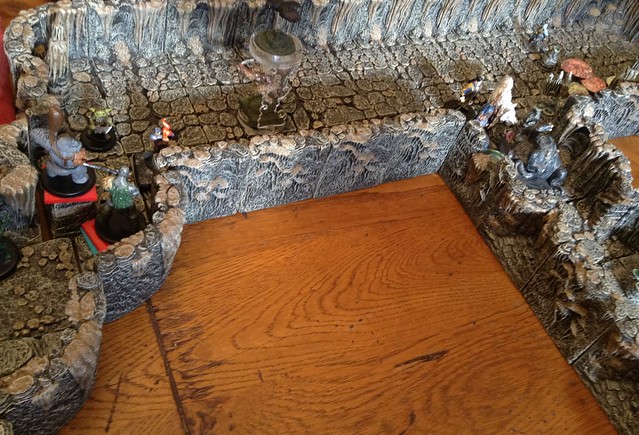 It was tricky fighting on two fronts, but it was beter than getting bottle-necked in the cave… 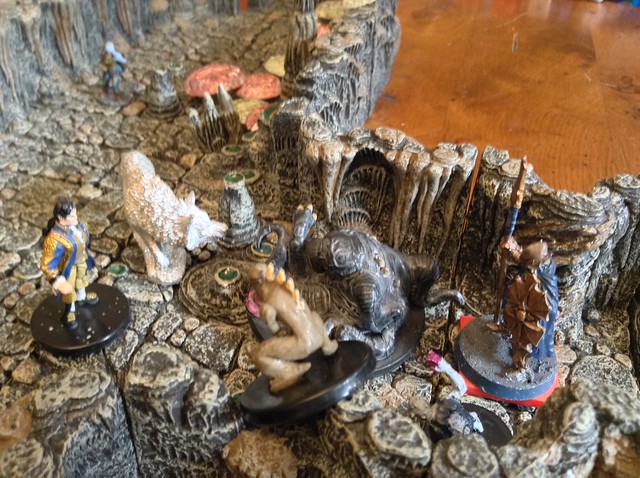 After the battle is over, they hear a crazed deep voice coming from the next chamber…

“Have the little birdies finally come to peck out my eyes? Come my little chickadees! Come witness history in the making!” 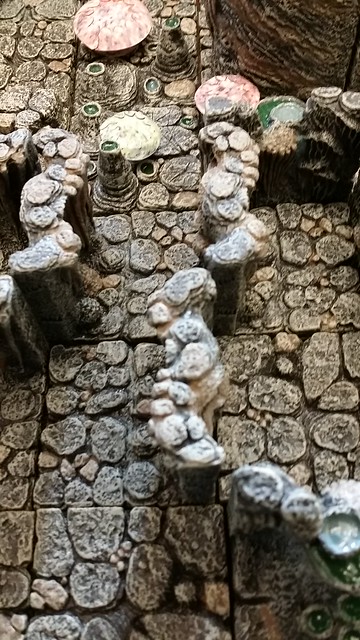 As expected, they enounter a Beholder. “Omaranthax, I presume?” Nostalgio quips. 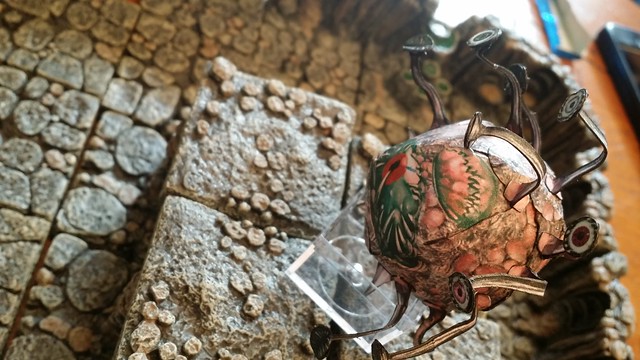 “I see you made it right on schedule. Wait, one’s missing! Something’s changed!”
“Lay down your weapons and implements of power and you will live to see my transformation into the ultimate dragon killer.”

“Foul giant fowl! We’ll tear their wings off and roast their carcasses!”

“You still resist? So be it! Meet my little friends!” 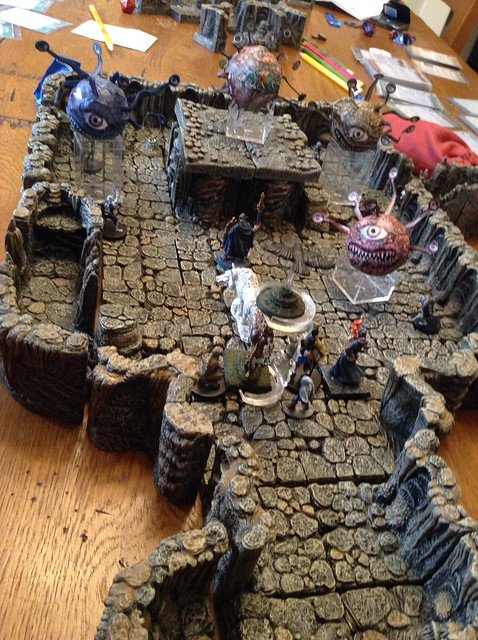 The party faces four Beholders and experiences true fear, so the drop their in-hand weapons.

“I drank some of it! Can’t deny me that! Now I’ll be ready for the dragon war!”

Then Edryd begins to sense that the Beholder is using telepathy, but not to reach him – but the Titan! And whispers to Shute (“It’s talking to your titan!”)

The new floaters drift in the direction of the disarmed party… 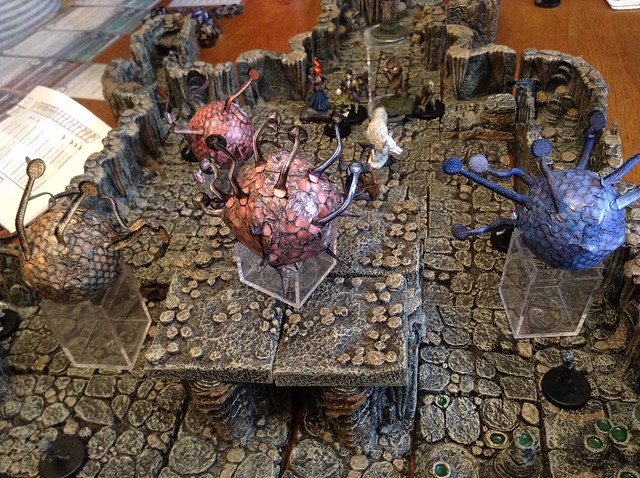 —
… and too late they see the truth that these are not true Beholders – something they learn as Omaranthax lets loose with several eye-stalk beams destroying the Gas Spores at the perfect time to shower everyone with glowing spores. 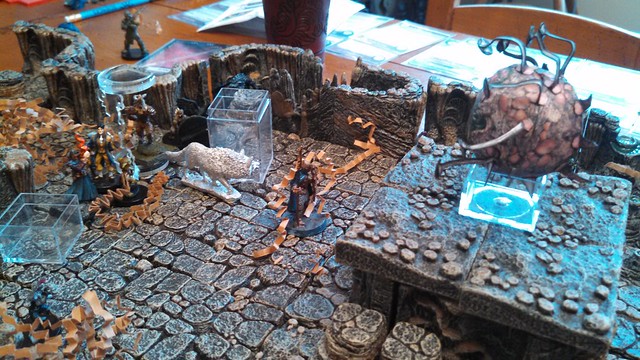 Most were infected. With something – but those infected don’t know what. 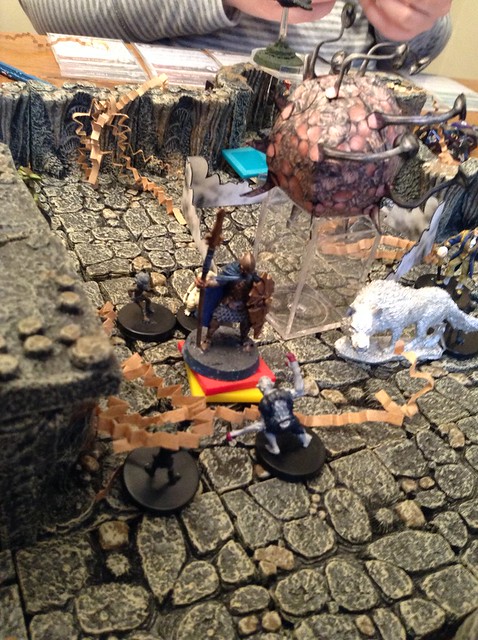 Battle breaks out with the minions and Omaranthax in earnest. Beams and bodies everywhere! 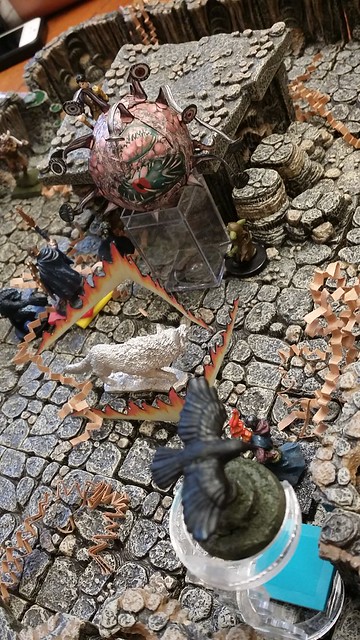 The Beholder seems to be focusing attacks on everyone except Shute and Edryd who are moving to avoid collateral damage to some effect. When Edryd blasts it…

“No! Why are you doing that? Get with the plan!”

Shiraz climbs onto the back platform to leap on the Beholders backside and attach the Manacles at the right moment. 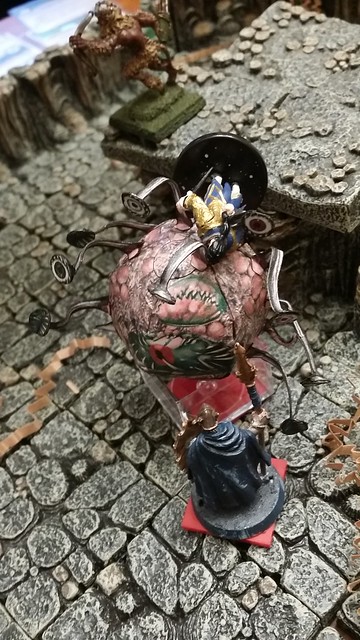 Done! If they can only take it down, they’ll have it’s spirit for questioning.

The Beholder panics and starts shooting at the roof, causing cave-ins. This harms everyone, but especially Ormaranthax. 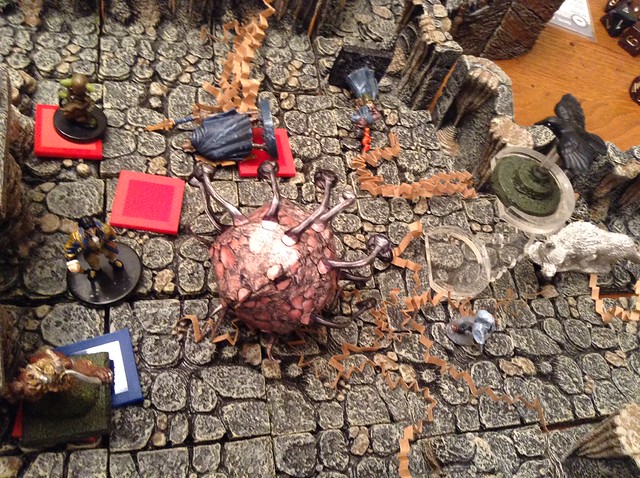 The cave in stops as a large section of the cave ceiling falls and crushes the creature.

“What in the Seven Hells what THAT all about?” asked Aquero. Shiraz replies: “Mayhap the parley will give answers…”

Now they have Omaranthax’s spirit joined to the Manacles, what questions will they ask? Will there be any left after the Araka of the Black Arrows is finished? How will what they learn affect their future?

What was all that crazy talk about anyway? Who was it talking to? What Dragon war? What were we infected with?

And how is Duggan doing? Is he still alive? Has Stonefang been released and destroyed Cleoragard?

All will be revealed at “The Conclave in Punjar”. 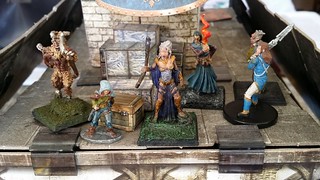 Next time “The Conclave in Punjar”.

The Temple of Selûne I have a feeling we're not in Punjar anymore!

The Conclave in Punjar The Joining and Breaking of the Fellowship

No Rest for the Weary