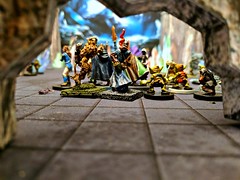 After the near total loss of Team Efreet and their ship The Steadfast , The Forsite Irregulars continued (adding Eachann, the new vessel for the Sea Titan) on their quest to infiltrate – and spy on- the Drow capital of Menzoberranzan.

The party goblin rogue, Shute Stumpsniffer, knows a way into the Underdark – through the goblin caves where she grew up. During that time, she was mostly raised by “Birdy” a goblin wizard that showed her visions of a magical creature: The Rainbow Phoenix. It would later turn out that Shute is the “vessel” for this long lost titan. (Short Web comic)

During the nearly two weeks of travel, Shute uncharacteristically talks more than usual about her childhood home:

o “We can get to the underdark if we go to the back of the caves – lots of older goblins would go down there for weeks and come back with amazing tales and shiny things. But some never came back.”
o “You’ll like it there! There’s a lush woods outside the caves that hides the entrance.”
o “I got the name Stumpsniffer from how much I loved going outside the caves to smell the trees.”

As the traveled within an hour’s journey from their expected destination, her voice became more restrained, even worried: “The woods is thinning earlier than I remember. There are a lot of cut trees here, we never clear-cut our green cover so severely.”

As they emerge from the receding treeline, they are approached by a goblin patrol riding wolves: “Halt! You are approaching our terratory! Turn back or face our wrath.”

Shute steps forward “I am of this tribe – I am Shute Stumpsniffer, and I have returned!”

The half-dozen border guard mounts gather around the party. “Shute? We thought you were dead! You need to come with us!” – they surround the party and escort it to the goblin camp. 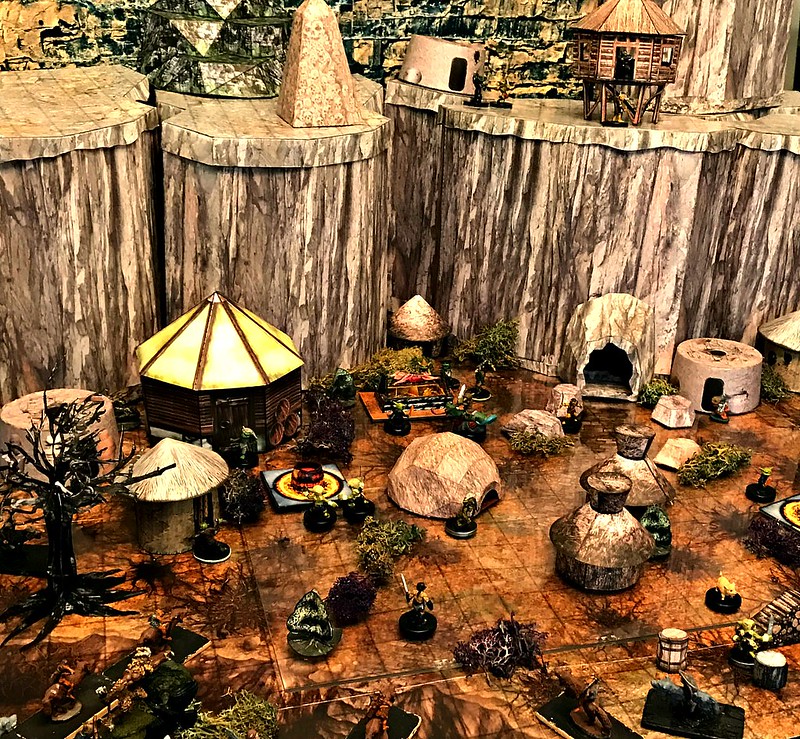 Shute becomes very distressed at the sight: The goblins have moved out of the safety of the caves and into ramshackle huts . “no, No, NO! This is all wrong! The woods is either depleted or has been destroyed by some calamity. Look at the strange scorch marks near some of the burnt trees…” 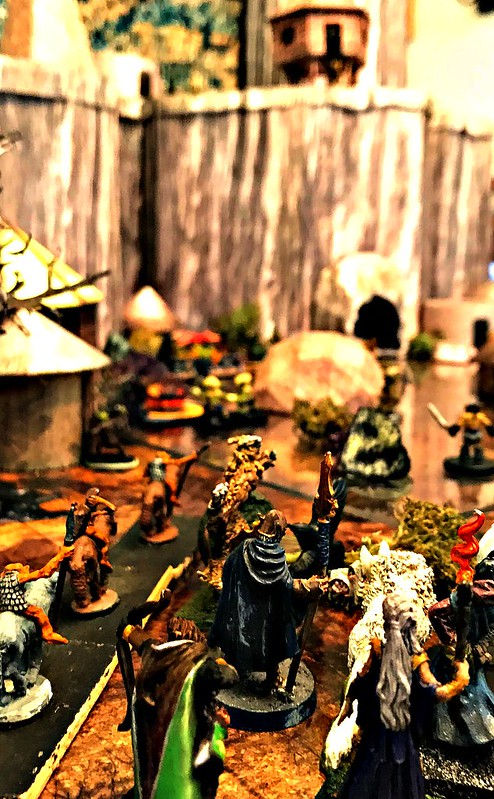 As they dismount and enter the town, word passes quickly among the tribe: “It’s Shute! The one who we’ve been looking for for 14 years! We’re saved!” 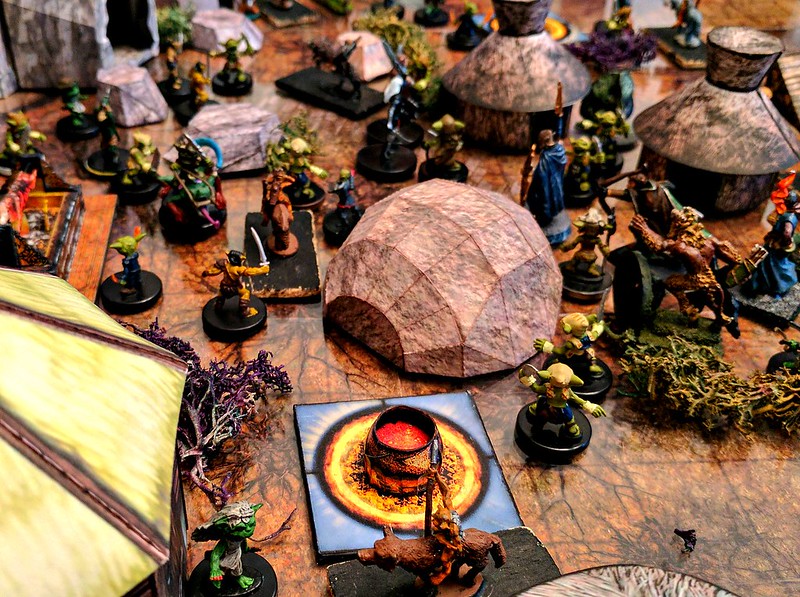 They are approached by the tribal leader (son of the leader back when Shute lived in the caves.) Shute pipes up “WHAT HAPPENED? Why is the tribe not living in the nice cool, safe caves?”

14 years ago, Gramzon (the blue dragon) broke it’s truce with us when it became enraged at the loss of something very valuable to him. He came up from the depths to scour our warrens, using his lightning breath to destroy every nook and cranny he couldn’t fit his bulk into – diving us out into the woods. He ordered us to search everywhere for his gem of “inestimable beauty” – having us all search, every day in the tiny cracks in the caves – but returning outside to eat and sleep. He went completely mad. Some of us tried to escape, but he burned the woods down so we’d be easy to keep as slaves – and anyone who tried to leave – well, that’s their skulls on the top of the mesa there…"

Shute scowls, her face tinged with an expression of guilt.

A female goblin voice interrupts: "Shute! Before you hear more, I have some news for you of “Birdy” the guardian of your youth!" – it was the adult voice of a teenage friend/rival called Gear. She was clearly now a healer. "And you and your companion that elven princess should come to the healing hut. 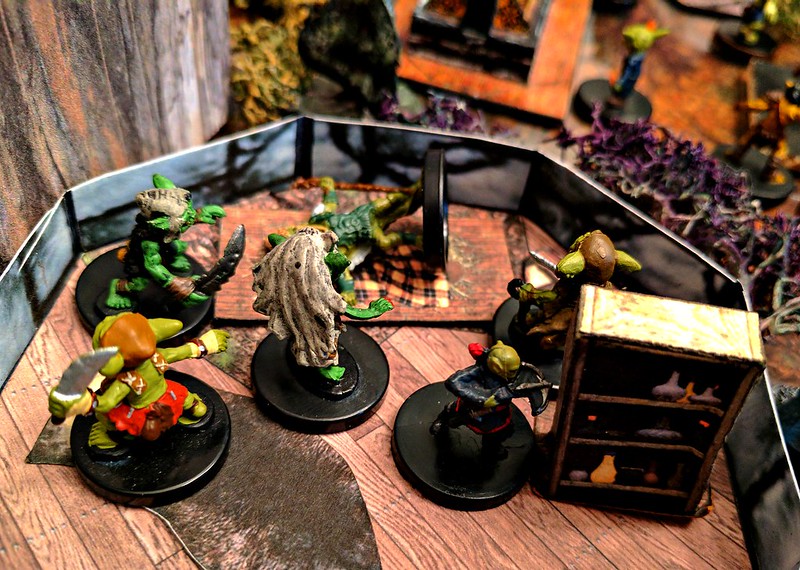 Gear continues: “Birdy died three days ago, certain that you would return soon. This is his body. His dying wish for me to cast a ritual when you arrived. May I?”

Shute, holding back tears, “Yes.” – so gear starts the ritual over the deceased goblin elder…

A mild-mannered voice emanates from the corpse: “Shute. I knew you would return, though I’d hoped that’d you’d stay away, for your own sake. My child, I know you have questions – that is why I asked Gear to allow us these final moments… Please, what is on your mind?”

Shute burst into tears: “WHY? Why did you mislead me about the Phoenix? Why did you put this… .this…. THING inside me?”

“Oh, my child. I’m sorry I waited too long to explain. You were young and happy – please forgive a lonely man for wanting to protect your innocence – it is a weakness of guardians that they are overprotective to a fault.”, the ghostly voice continues, “I did not place the titan inside you. You see, you are not a native-born member of this tribe. You were delivered as an orphan – your parents killed when a vessel transfer failed and ended up with the beast accidentally placed in you. I was the nearest shaman that your kinsmen knew.”

“But know this, the accident that lead to the Spirit Titan inside you – a “vessel out of season” – a supposed incompatible body – was quite fortunate. You see, the reason so many titans are incompatible isn’t because of race – but of character! I am convinced that your innocence made you compatible – it is a compatibility of the spirit. So many vessels fail because of the inevitable corruption that happens when their innermost desires are fed by the awesome power of a titan."

“I know you can tame Rainbow Phoenix and change the legacy of the Titans forever. But, there is one more trial you must face first, and I am sorry for that. Whatever you do, don’t give Jacynth back to Gramzon. Please forgive an old man for the folly of thinking he can protect you forever. I have always loved you.”

—Shute: “Of course I forgive you, father. Thank you for everything. I love you. Please rest now. Your work is done.” 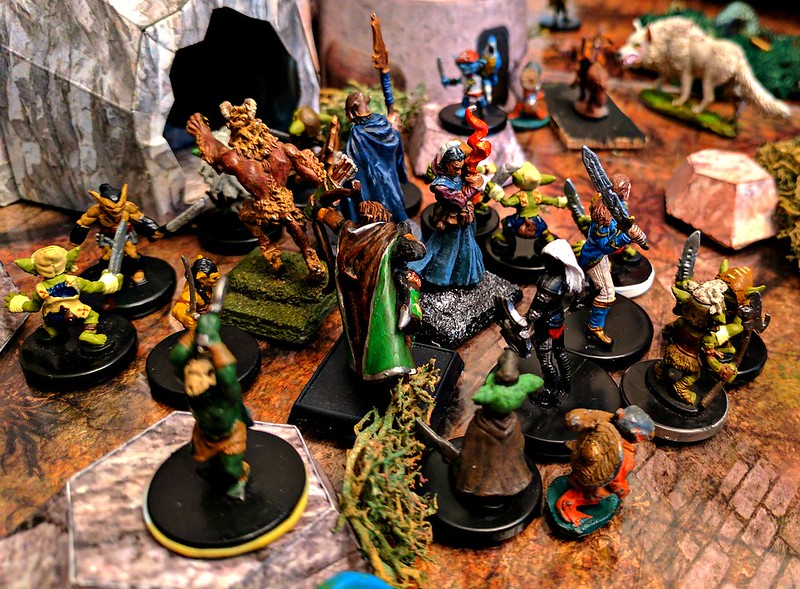 While they were in the healing hut, the goblins outside were being busy, apparently packing up to go somewhere. When interrogated by our heroes that weren’t with Shute, the answered “We’ll be moving back into the caves soon!”

As Gear emerges with Shute “That challenge he mentioned. It’s your sacrifice. We’re taking you to Gramzon now – he specifically has been planning for this day for more that a decade. He’s convinced himself that you have his precious jewel. May I escort you? I will protect you as well I can, but I must protect the tribe first.”

“Very well. I will face Gramzon. Gang – let’s go see this dragon.” – and the party heads into the caves with a large goblin escort. The anticipation is a cross between joy and regret.

As they travel through the ruins of the former goblin warrens, they look very different. Webs and thick dust cover giant crystals embedded in the walls. “The dragon’s lightning makes those gems when he scoured the tunnels.”

As they descend, Shute tells them an abbreviated version of her history – explaining how her picking up a shiny object lead to so much suffering for her people and how “… that suffering ends, today.”

Approaching Gramzon’s lair, they are great by a giant 4-armed goblin, clearly a thrall for the drake. 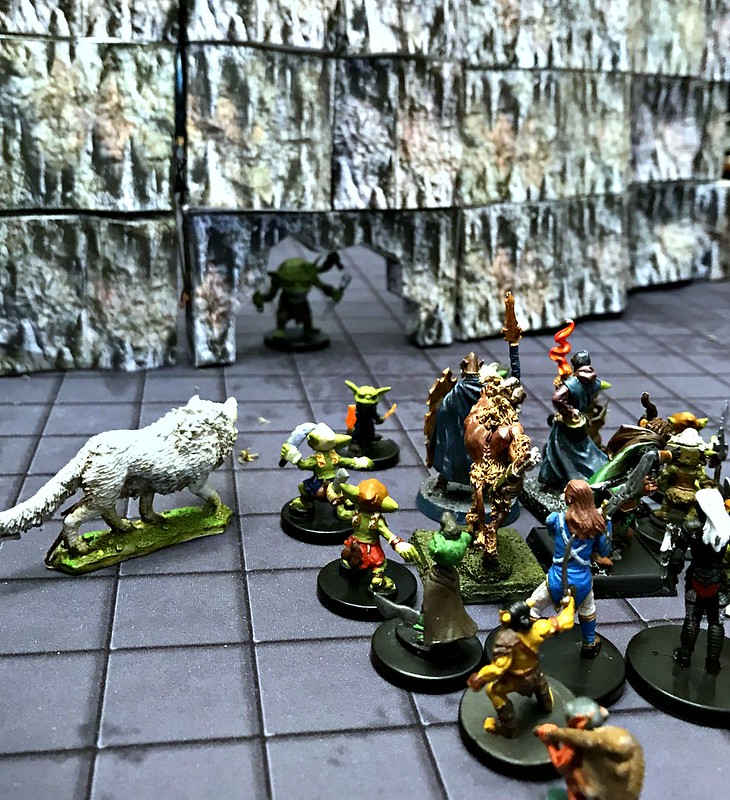 The escort says “We’ve been expecting you. Follow me.” 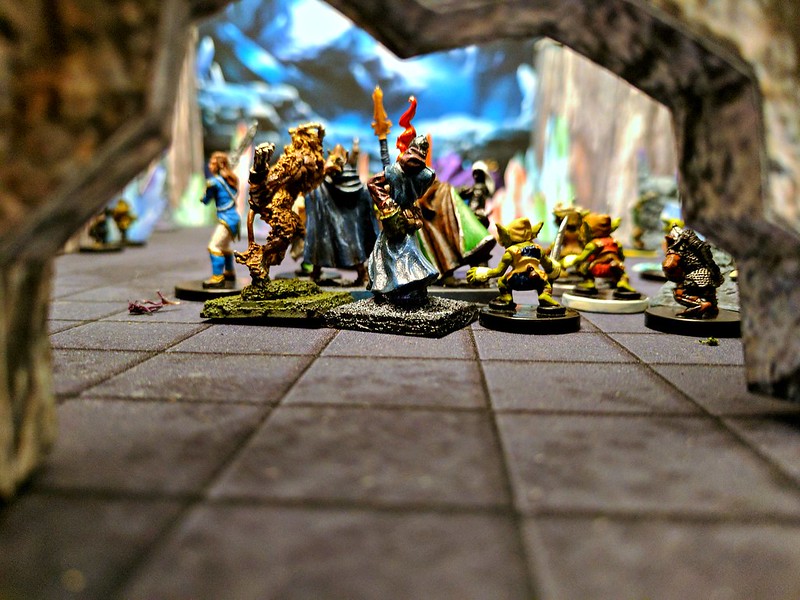 Several of the goblins stay close to each Irregular, to interrupt any attempt at foul play. “Don’t try anything, funny. This is between the dragon and Shute.”

The rest spread out, as they know exactly what the dragon can do to them. 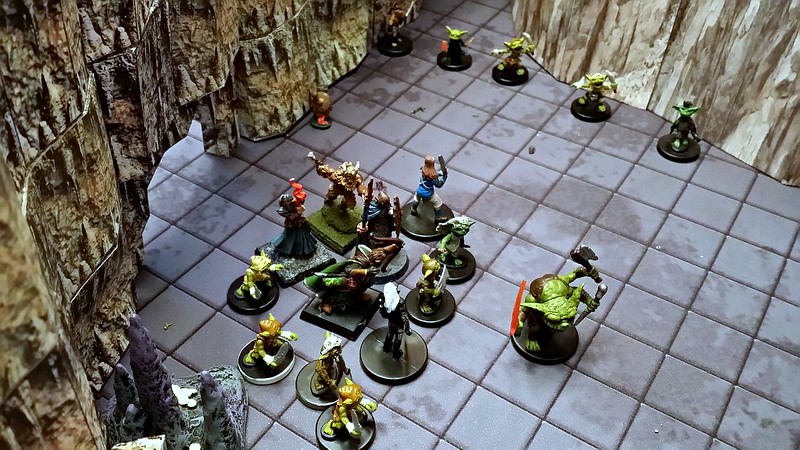 Gear joins Shute as she approaches Gramzon. “There you ARE! I’ve been waiting such a LONG TIME for you… THEIF!” 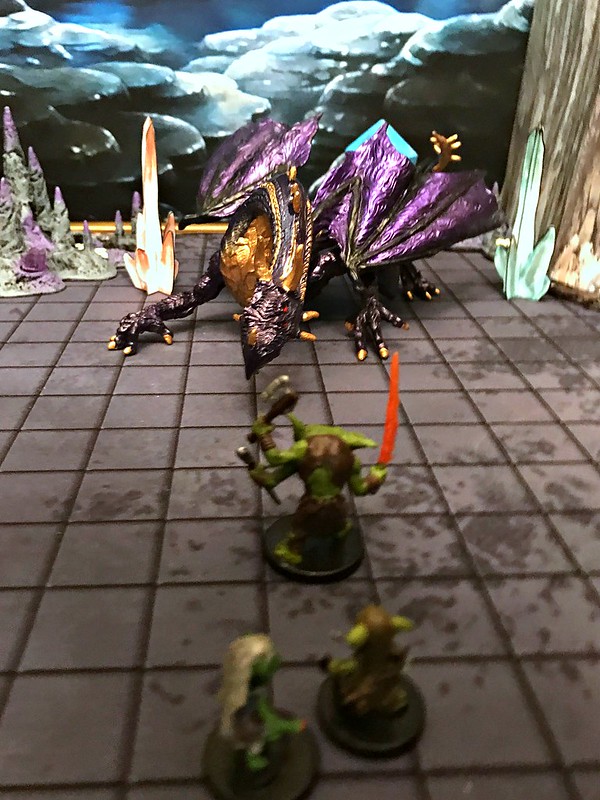 Shute: “I’m here Gramzon. Let’s get this over with.”

“GIVE ME THAT WHICH YOU STOLE FROM ME.”

Shute: “What is that? And how could it possibly justify the slaughter of so many of my tribe?” She motions to Gear that she should step to the side of the cave – away from the head of the dragon.

Shute transforms her weapon into a throwing star, flips it directly into Gramzon’s face, distracting it while she slips into the Shadows. “That’s no choice, so you’re the one that will die today. For my father, and my tribe!” 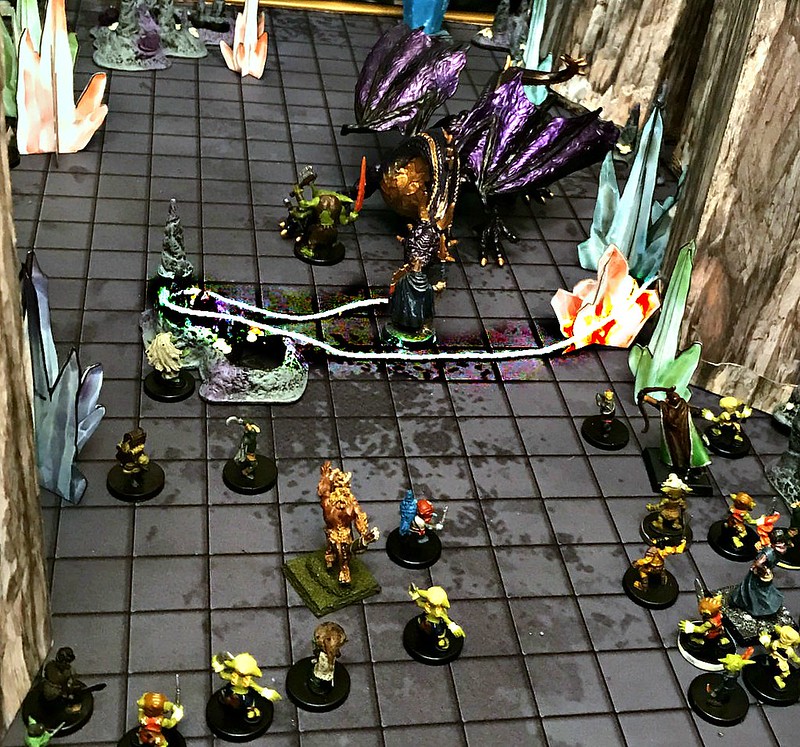 The Irregulars knew this would happen and launch an attack so swift that none of the goblin bodyguards can prevent it. They are flatfooted at how much force Shute’s friends release in just a few seconds.

But Gramzon focused quickly on Aquero’s full-frontal attack with claws, bites, and creating a lightning barrier between two giant crystals – one to each side of it’s massive head. 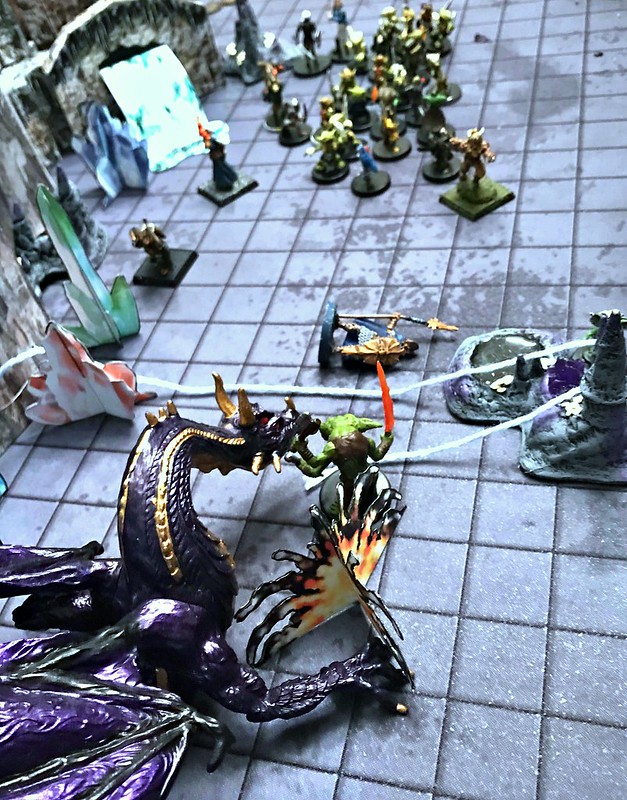 This onslaught knocks the fighter out… Gear moving quickly to provide aid, and Nostalgio focusing his Bard’s song on the his fallen ally as well. 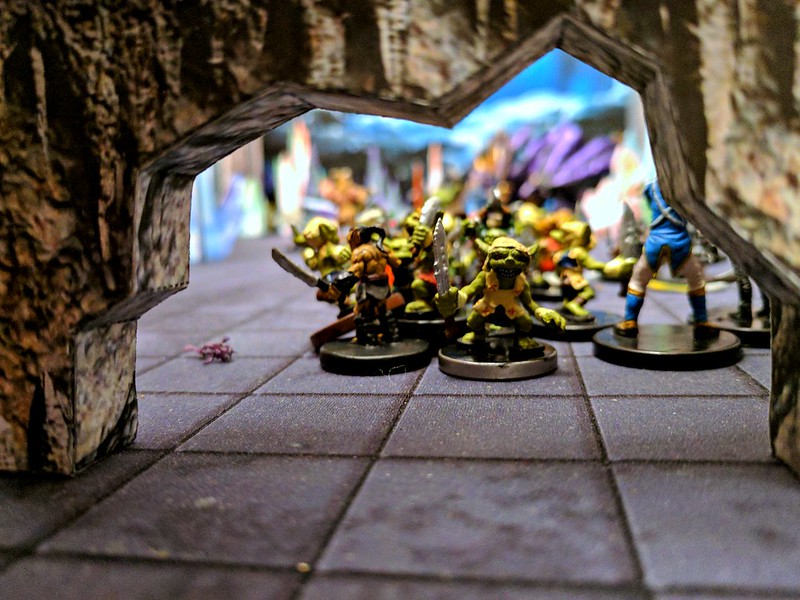 Shute uses the distraction as an opportunity to jump on the blue dragon’s back – and lands a deep cut into Gramzon’s armored neck. 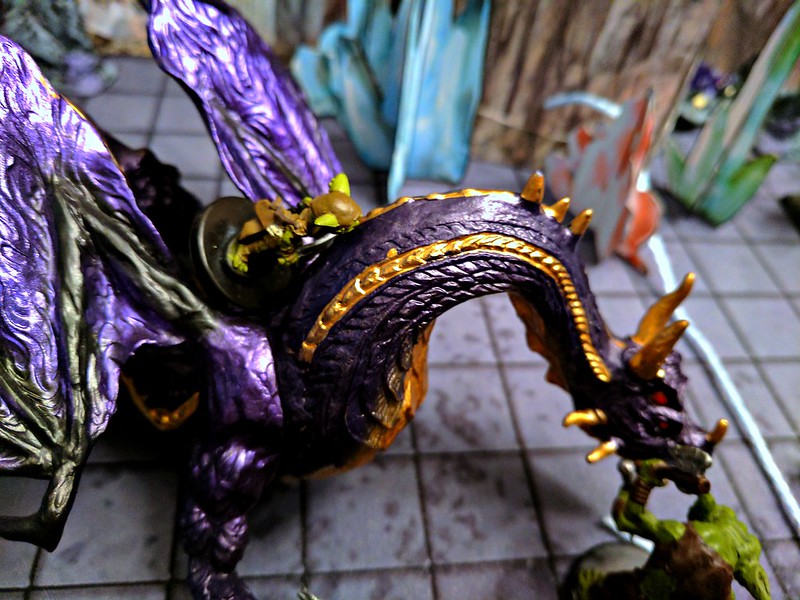 “GROWWWWL! Give her back now!. I gave you a chance, how I will hurt you!”

With that the enraged dragon let’s loose a lighting bolt directly through the center of the goblins in retreat, killing at least a dozen instantly. (and dropping the fighter, again.)

This enrages Shute so much, that she releases the Spirit Titan: Rainbow Phoenix… “Screech!” 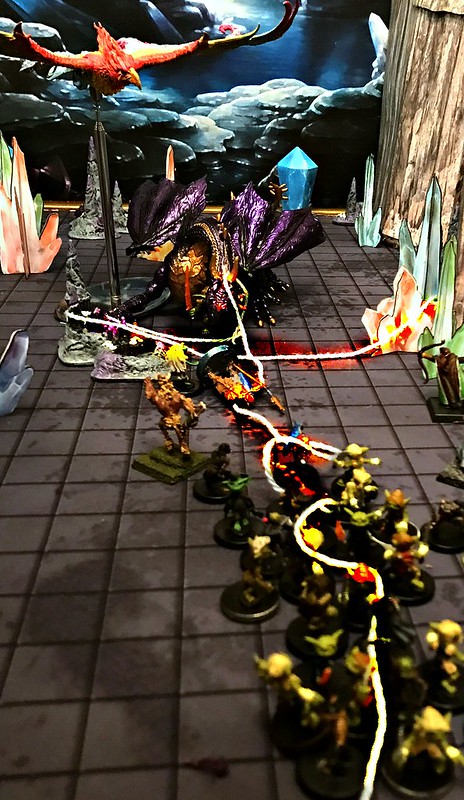 “What? Shute has a Titan? What a glorious battle this will be!” – and Gramzon turns his entire focus on the titan. 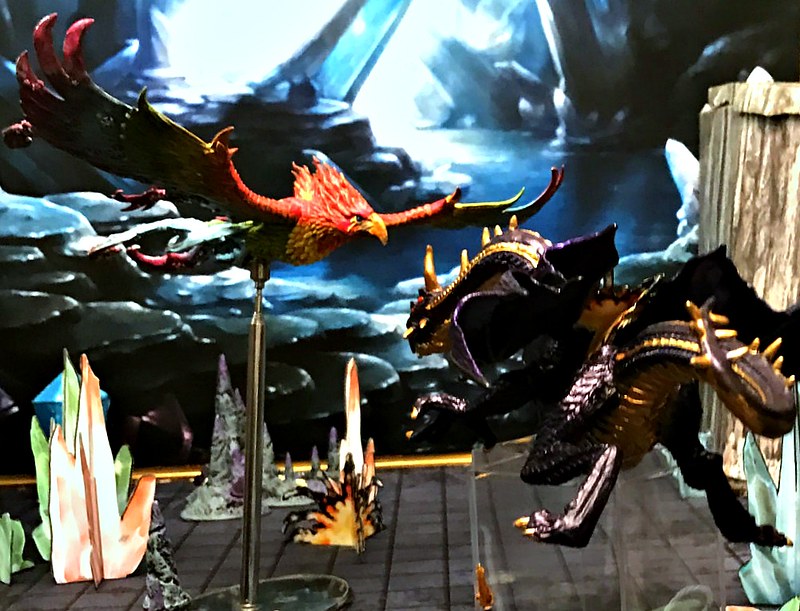 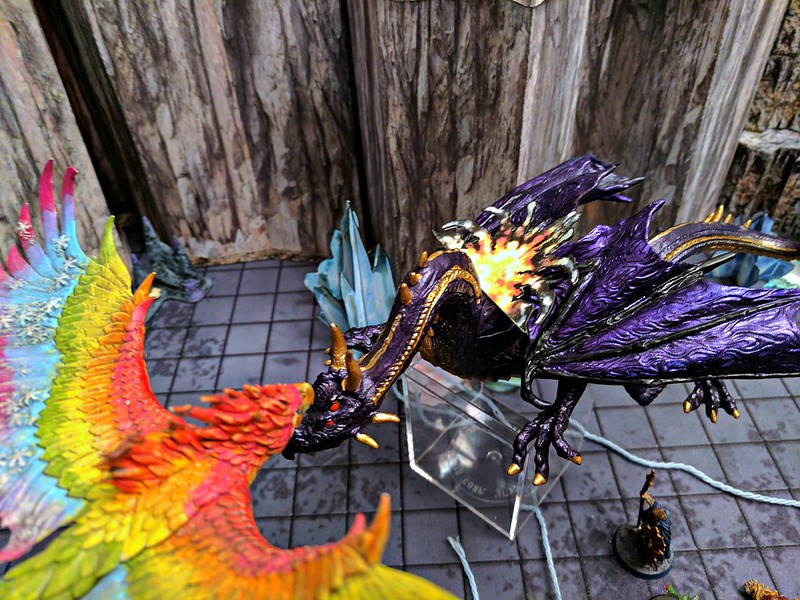 …while her allies unleash the holy hell that they have at their disposal. 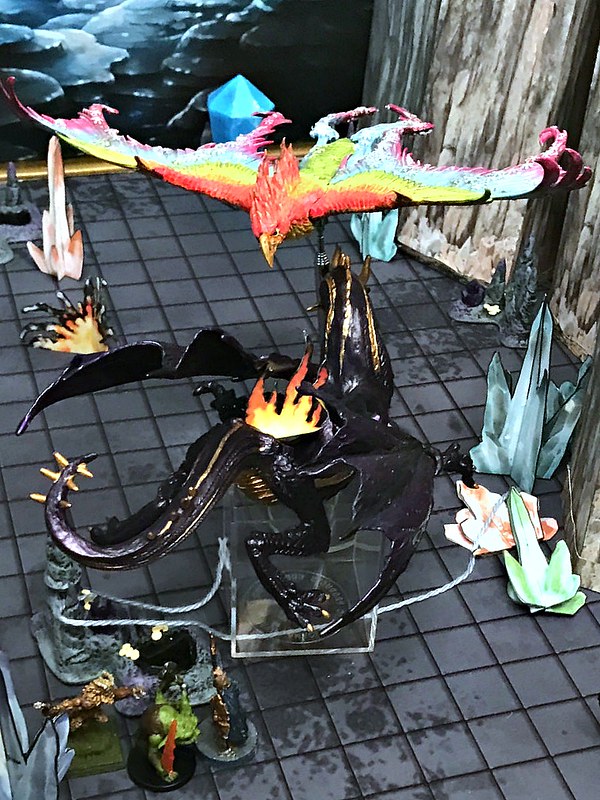 In an attempt to limit the effectiveness of the blue dragon’s lightning, the titan uses her claws and beak to grab Gramzon’s neck, severely limiting the ability to turn his head… 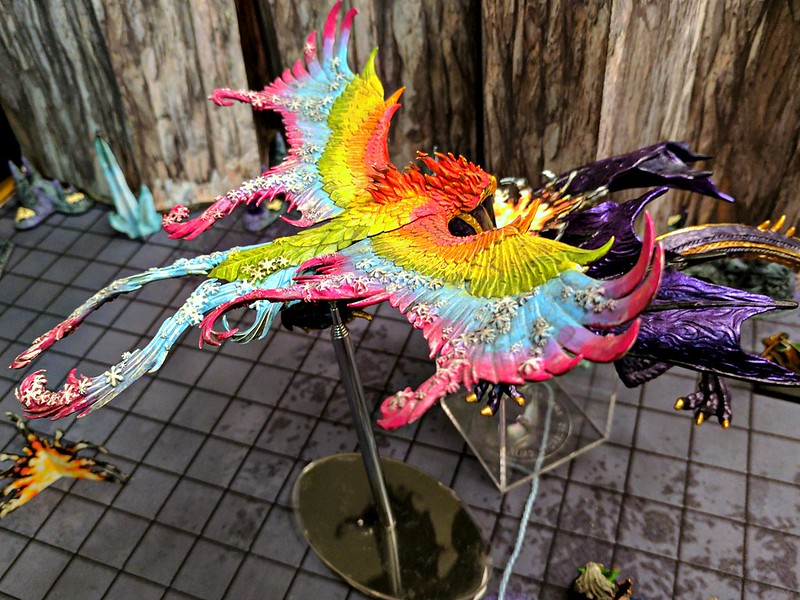 Gramzon’s ability to counter attack and defend is limited, so a final wave of attacks wounds it significantly, and the titan stops flapping her wings and forces the dragon to fall with her to the ground in a titanic body-slam! Killing Goblin’s Bane. 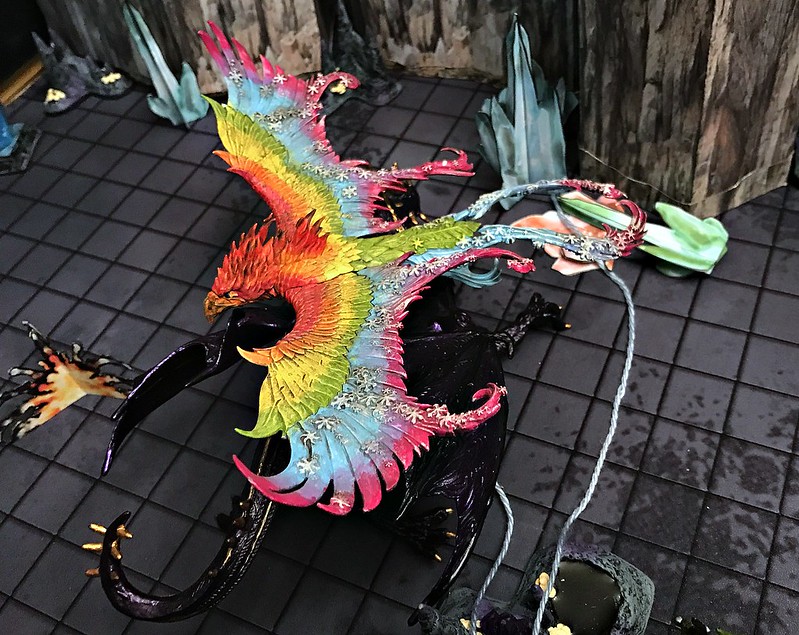 The crisis passed, the Titan once again returns Shute to her goblin form, and she collapses on the ground, exhausted. 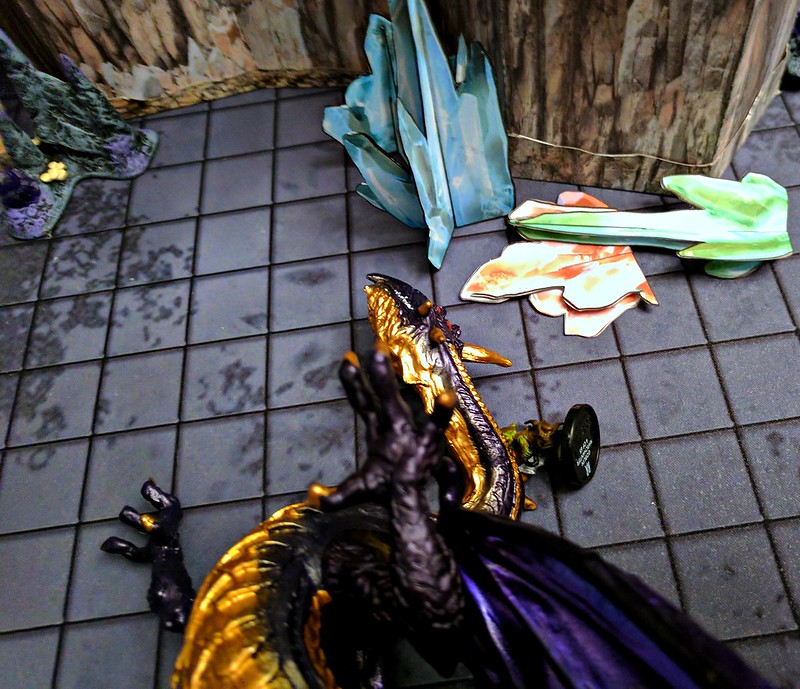 Gear, using a special staff of healing she has is able to restore the fallen goblins. The Irregulars stay a day or two to help them move back into their caves, and rest up for their long journey into the Underdark.

Next time: “Wearing A New Skin”

Love your battle boards! Minis and terrain make a scene for me.
-bort