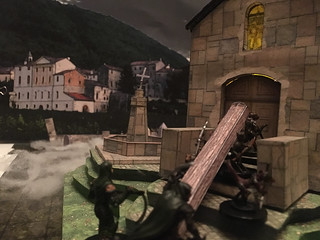 Last time, a group of adventures were gathered by Charles Foresite, well equipped, and sent on a mission to find a monk that was doing some important research who is late reporting in. He was last known to be in the pastoral town of Greenest. When the party approached the town, it was being raided by an army of Kobolds and humans while the keep was under attack by a Dragon. They rescued and escorted as many of the townsfolk the encountered on the way to the keep… 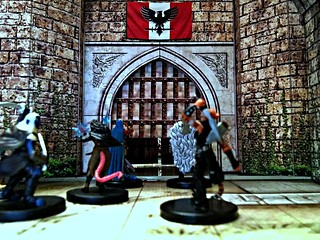 The Defenders of Greenest

While Lady Okendorser, the Kobold Paladin went to investigate the battlements (and ended up frightened watching the Blue Dragon vaporize the palace guard standing right next to her), the rest of the group heads to the keep’s great hall in search of some rest, and some answers.

It has been turned into an regency refugee center, with people everywhere trying to deal with the physical and emotional distress of having their homes raided and barely escaping to the keep. 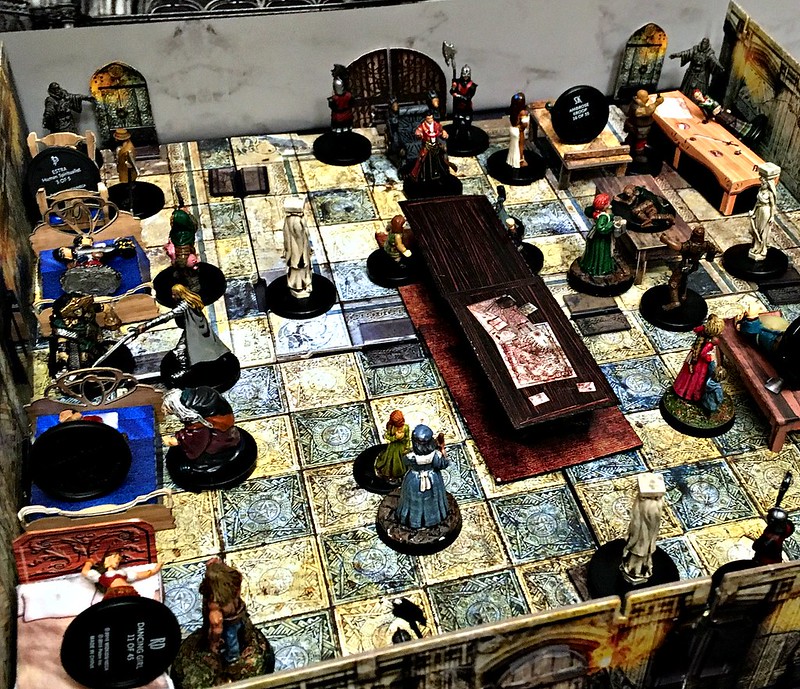 The group (minus Lady O) are quickly approached by the Castellan, Escobert the Red. Escobert is a female shield dwarf with knotted, tangled, bright red hair. She is accompanies by a Ranger and a Fighter who clearly who she’s just hired to help defend Greenest. She deeply appreciates the work they’ve done bringing so many safely in. 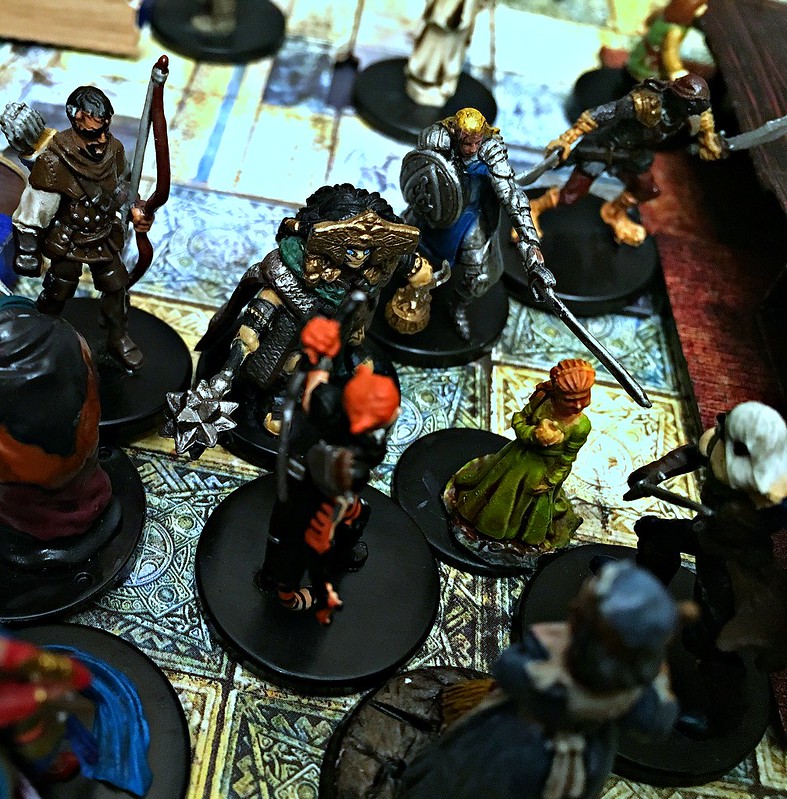 Back at the entrance to the hall, Lady Okendorser enters the chamber (the Blue Dragon has ended its periodic assault). Immediately the two guards lower weapons at her as they shout “invader!” She is quick to point out that “I’m with them! We just saved two dozen of your citizens!” while nodding in the direction of the conversation in the middle of the room.

Escobar waves her through. 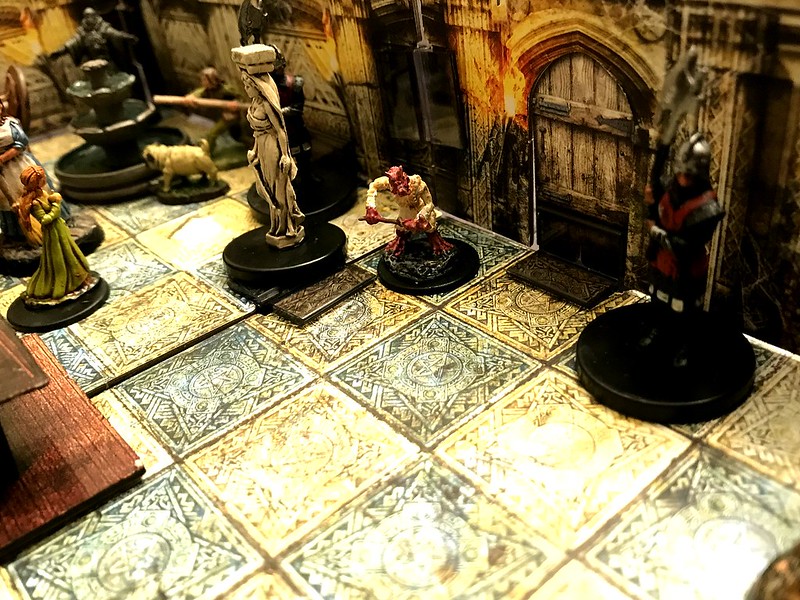 Escobar: “Why have you come to Greenest?”

Escobar: “Well! That is certainly above my pay grade, please come with me and speak with the Governor.” 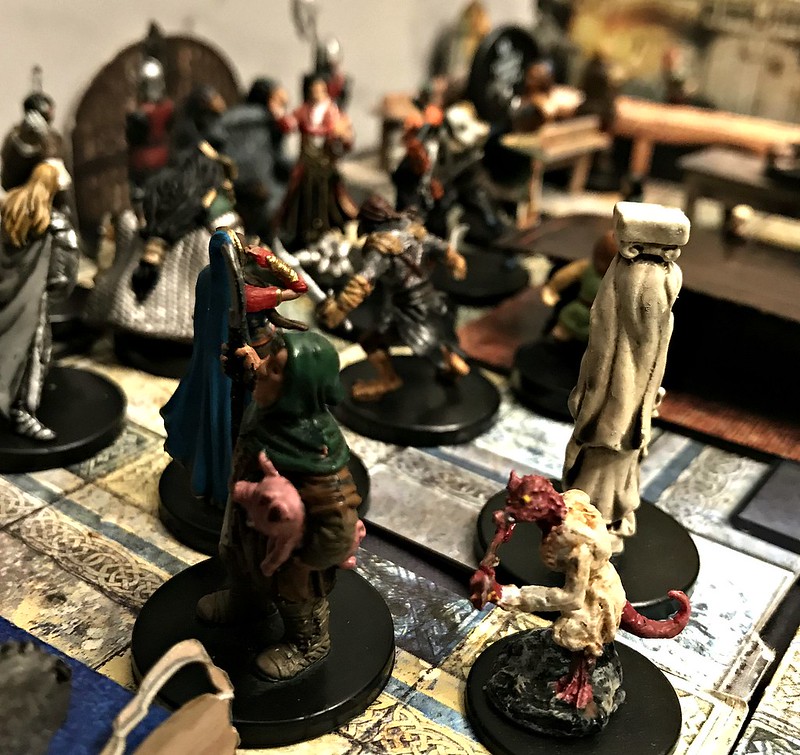 “This is Tarbaw Nighthill”, a human male of sixty years.

[Pleasantries, gratitude, and narrative positioning omitted] “Will you help us?”

“Escobar has the keys to an disused old tunnel under the city that leads back down to the river. It’s a secret way to move water and supplies during a protracted siege, but we’ve been at peace so long it hasn’t been cleaned out. Could you clean it out, and use it to get over to the Church? The priest isn’t here and many of those who live near the sanctuary aren’t here. The bell clanking may be a sign that they are under siege as well and could use relief.” 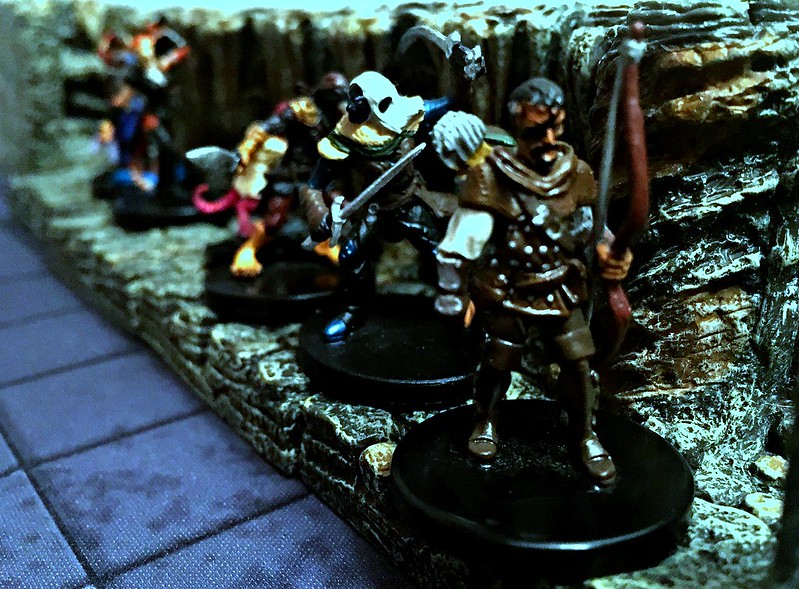 After clearing away lots cobwebs, they finally encounter swarms of hungry rats! Soon two swarms are crawling all over the fighter: 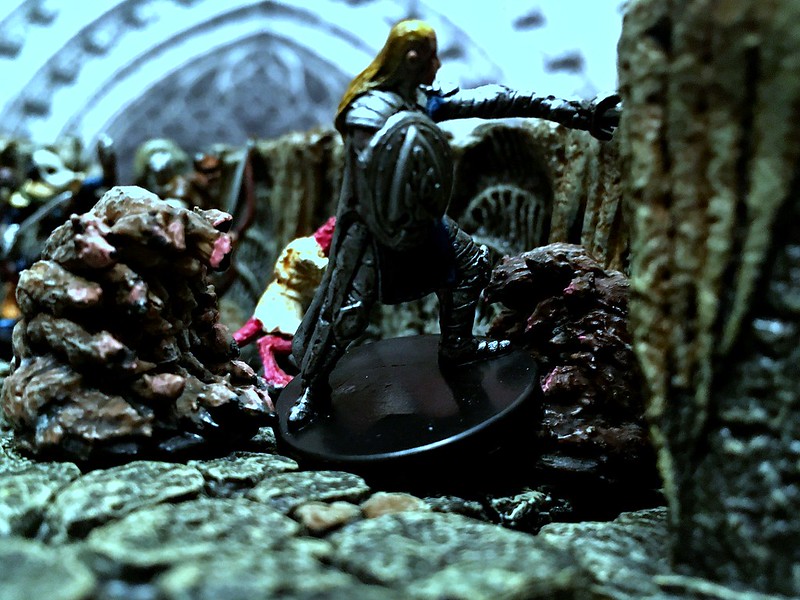 Jah-Quatt, The Tabaxi Druid, transforms into a snake to join the fight… 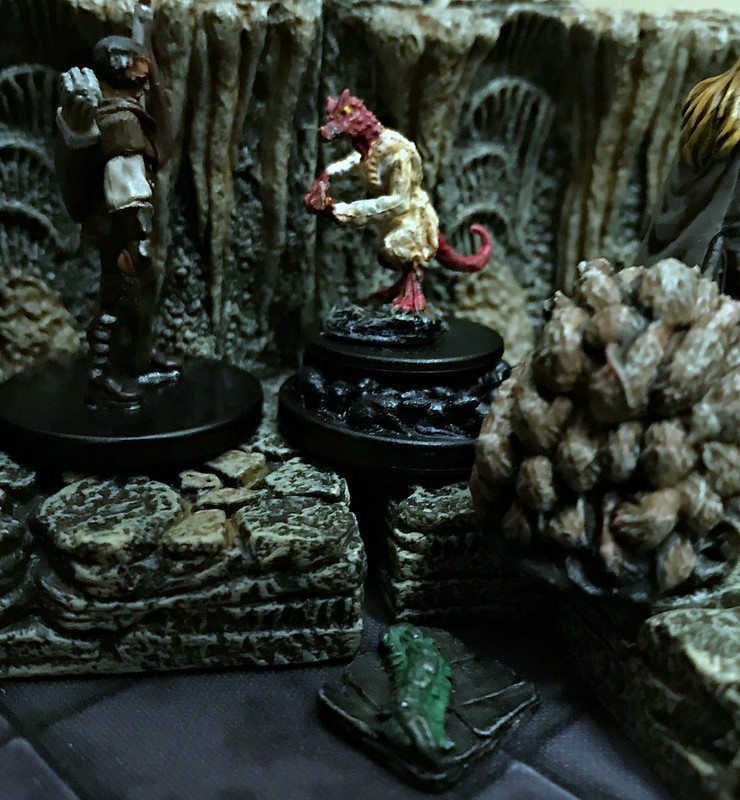 The rats are quickly dispatched… 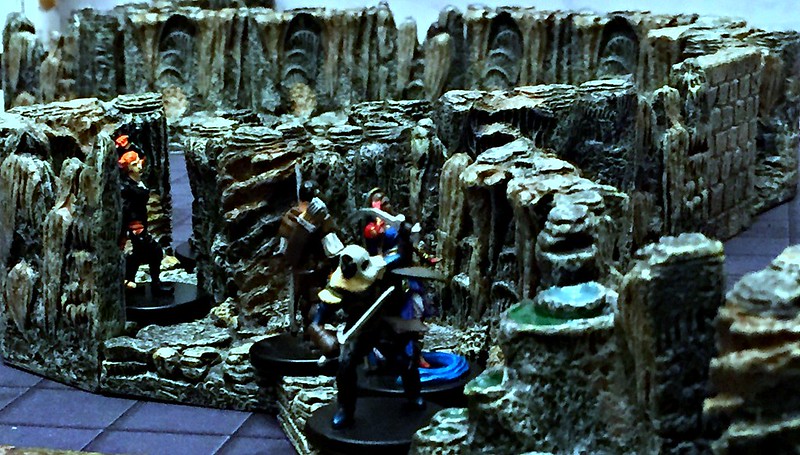 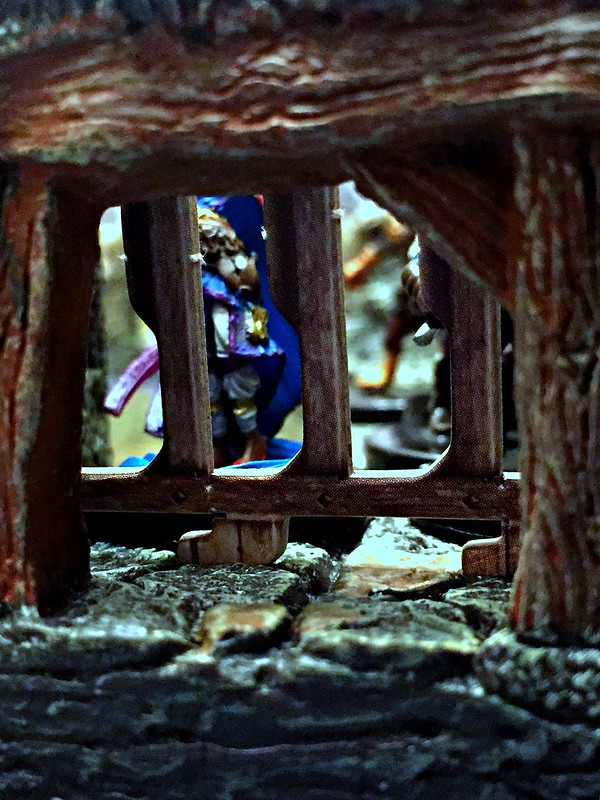 The Kenku Rogue “Never”, is able to repair the lock and open the gate, but they keep it closed when they hear Kobold chatter out on the river.

Jah-Quatt transforms into a rat to investigate. 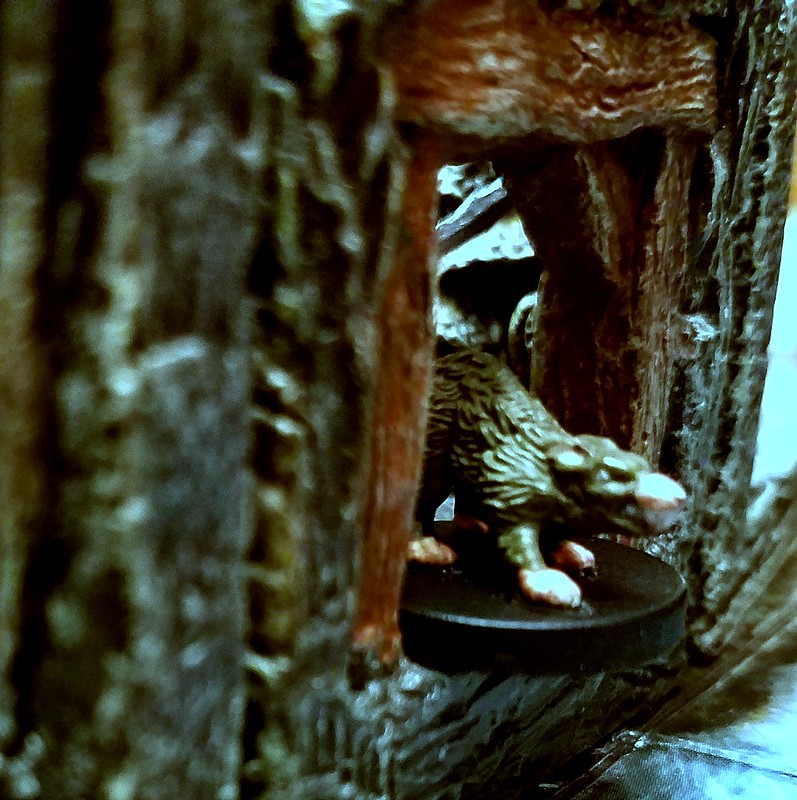 The Kobolds and their mercenary handlers are searching the river banks for townsfolk. Lady Okendorser sneaks out the gate… 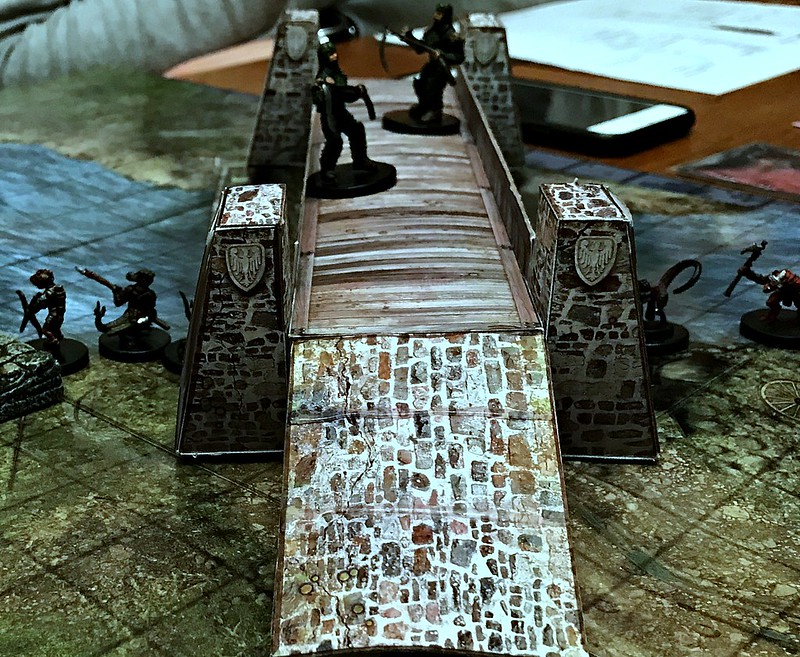 “There’s nothing more this way, my unit already searched it.” The kobold in front of her turns and signals the commander on the bridge…

“Alright – lets load some carts!” shouts the commander as the leave headed into town. 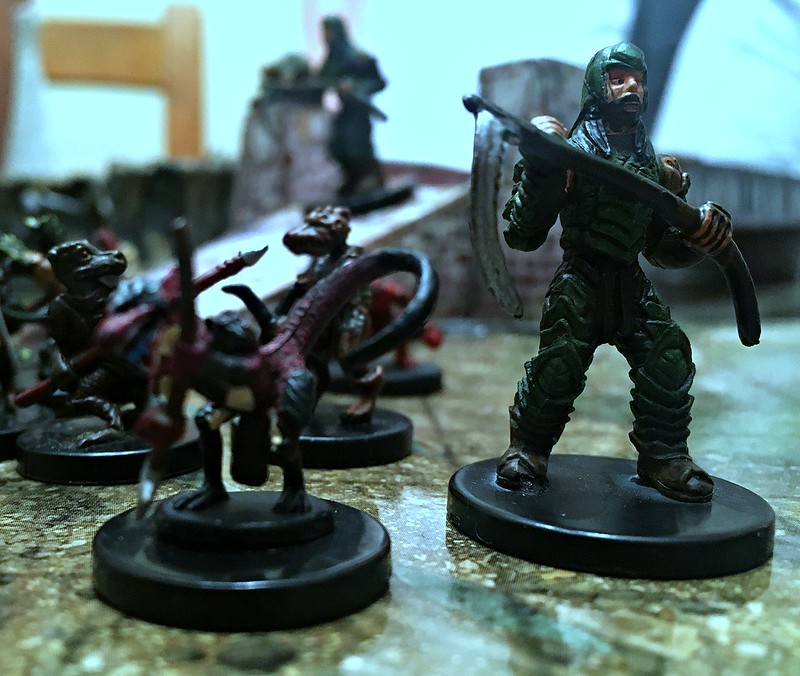 Once they are clear, the heroes open the gate, and exit closing, locking, and hiding the tunnel entrance behind them. 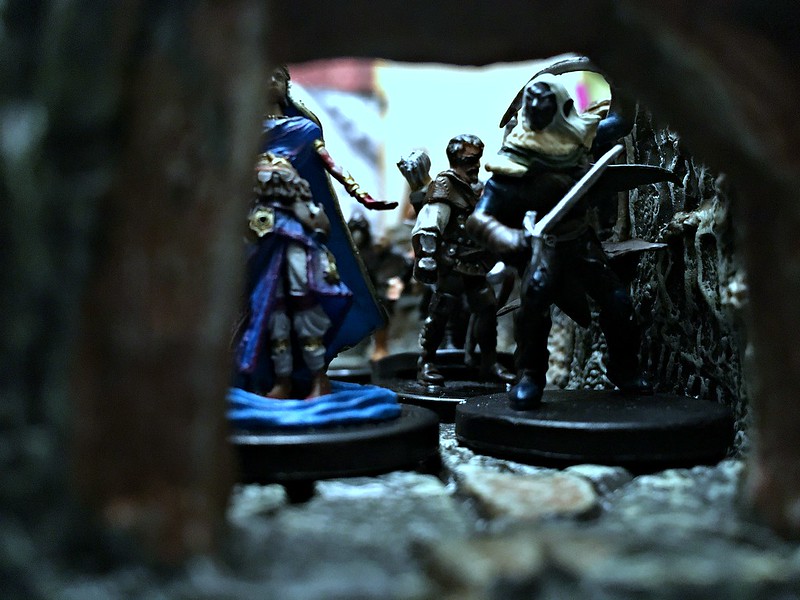 Ten minutes of running later, emerging from the woods they approach the Sanctuary from the rear, where the graveyard is covered with a thin layer of smoke. 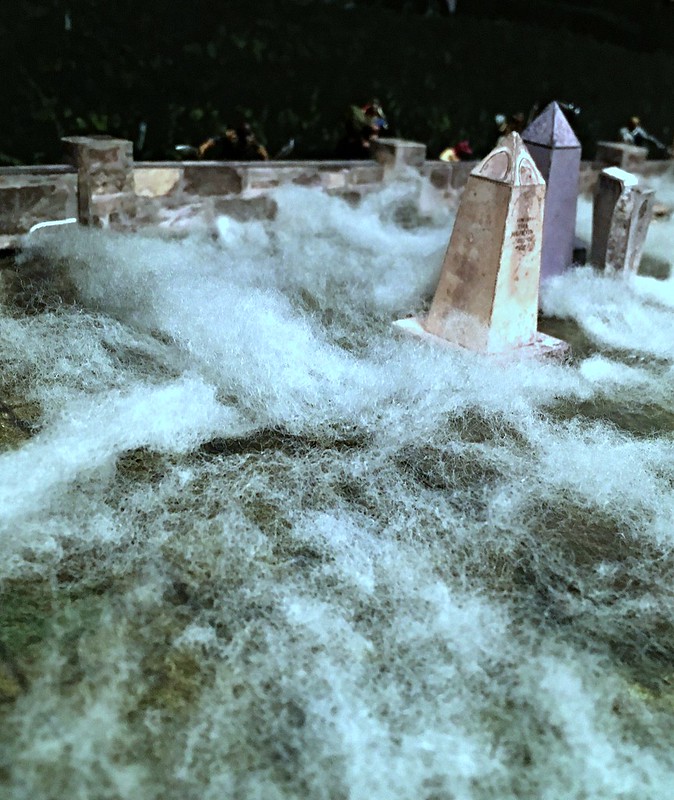 There are three groups around the building, a large patrol (currently on the far side)… 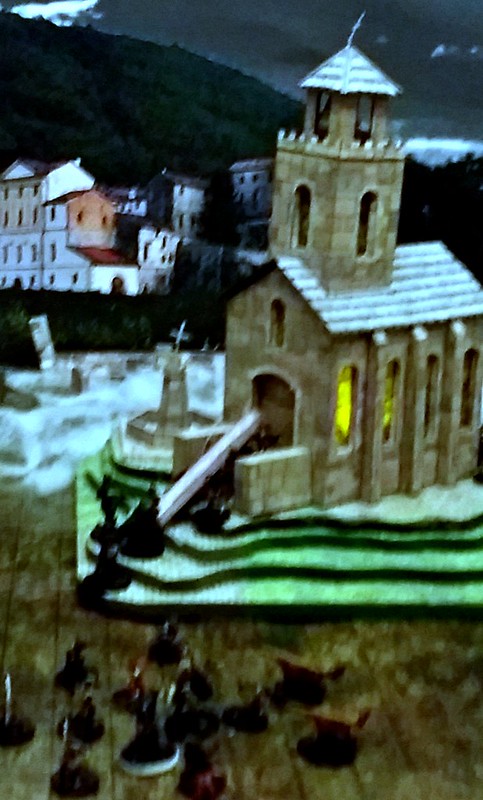 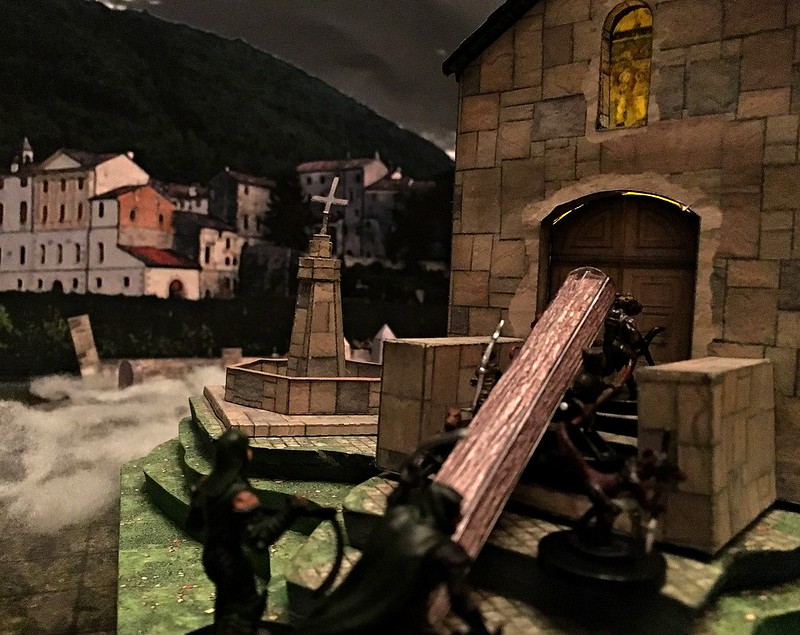 … and the group generating all the smoke by clumsily trying to burn down the back door. 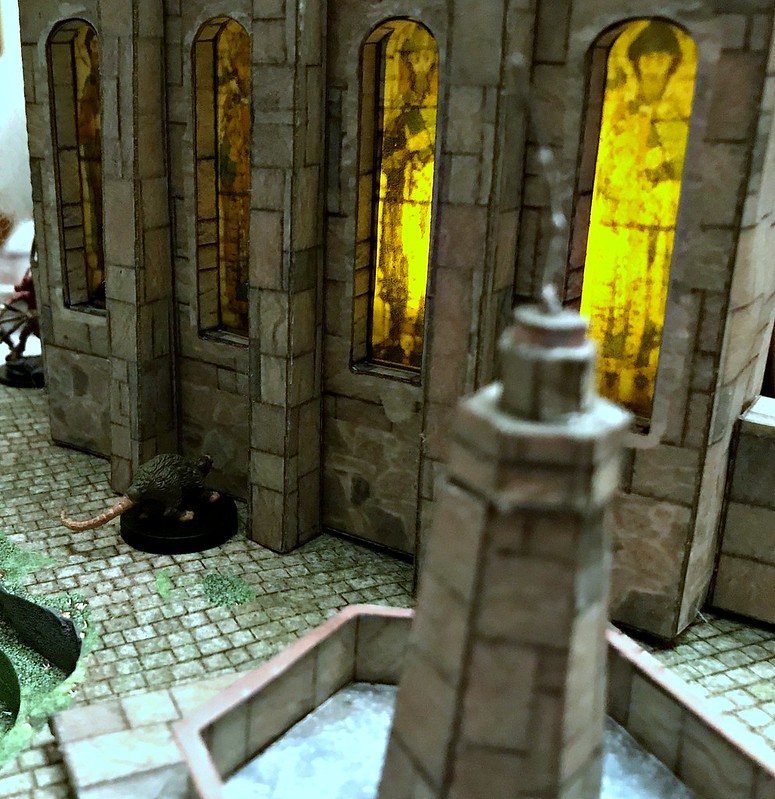 And finds cracks large enough in the staircase. Timing his entry between rammings, slips in to the crypt under the floor of the church… 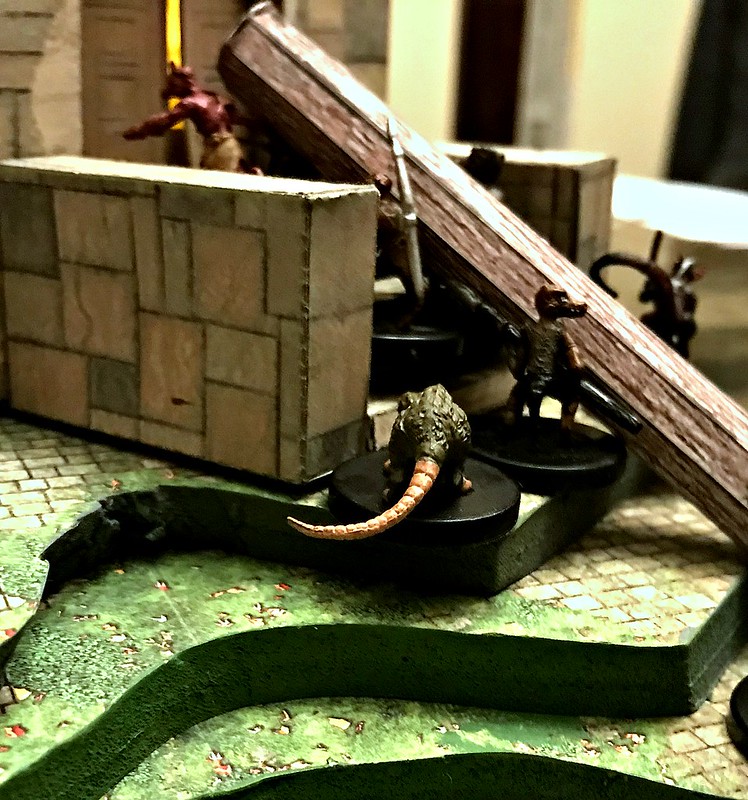 Those in the church are too busy trying to hold the door to notice the rat come in from the floor. 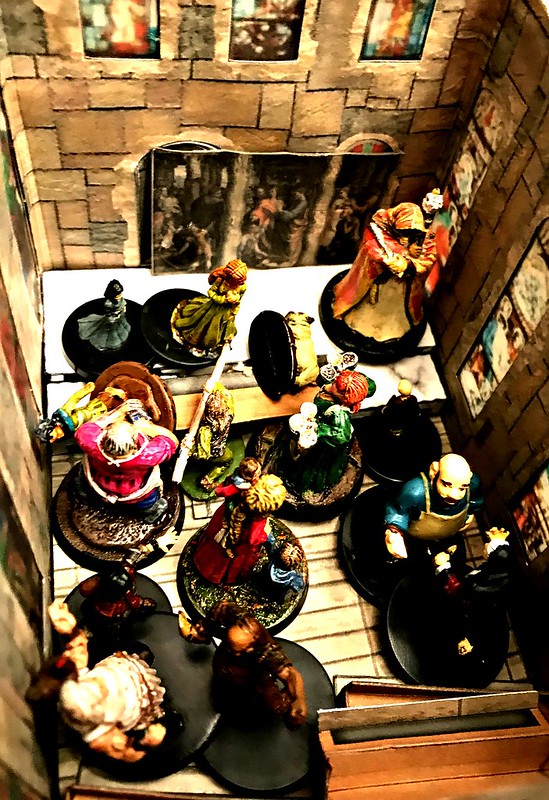 So the druid decides to transform back into his human form, and talk with the people about their plan to help them escape via the back door.

He signals the group using a lamp the inside details… 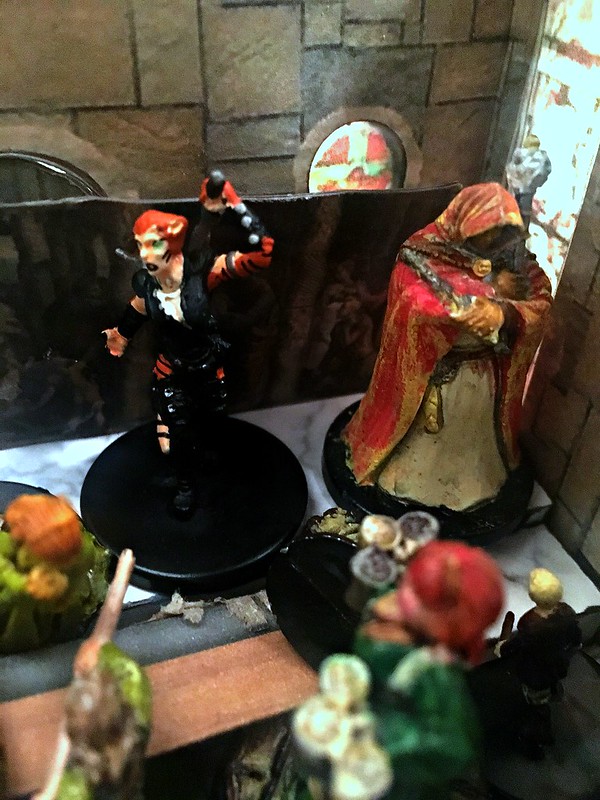 Before the patrol can see their position, the rest sneak through the smoke. The plan: Lady O sends the mercenaries away (works). 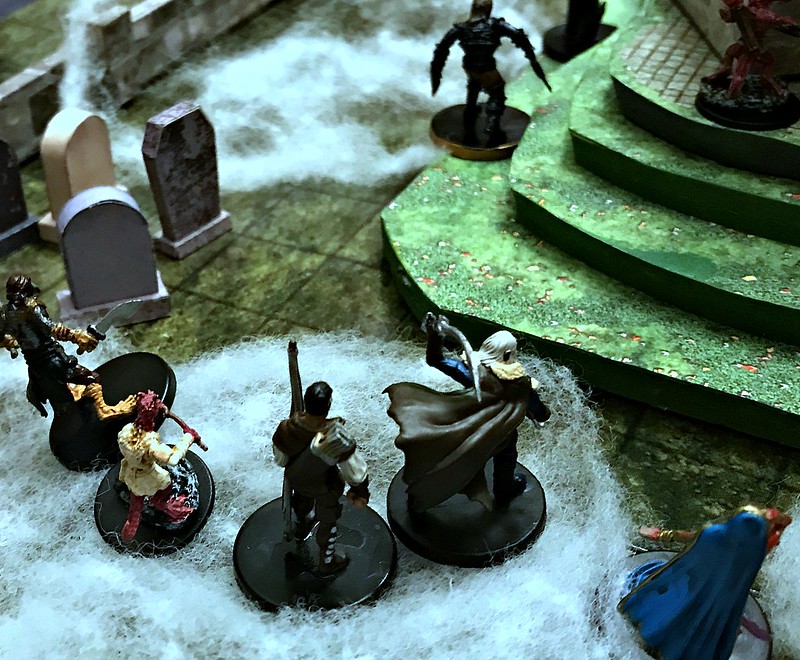 And Sohtah-Suqr Thuderwaves the staircase from the bottom at the same moment of the “BOOM” of the ram. (works!) 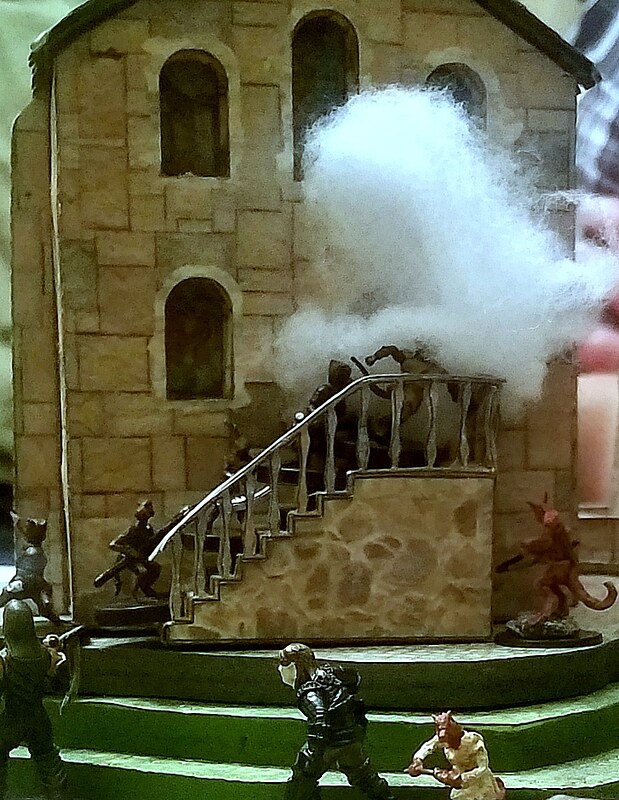 Jah-Quatt yanks open the hot back door and puts out the fire, using druidcraft… 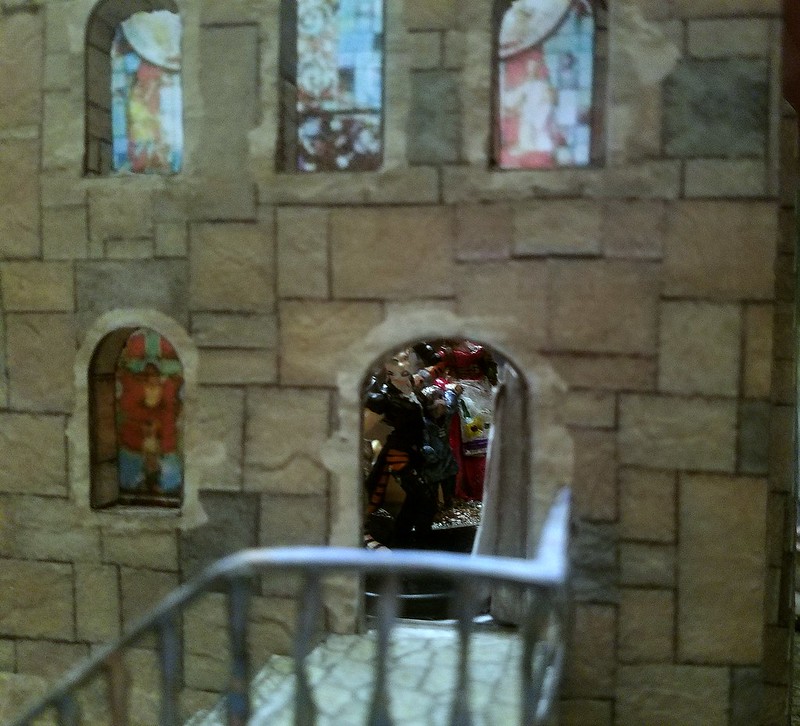 As quickly as possible, everyone heads out through the smoke, which is being moved by the spell casters…

The Ranger drops a trap, the cleric creates a distraction using Dancing Lights… and the rest pick up children and infirm to make for the woods. 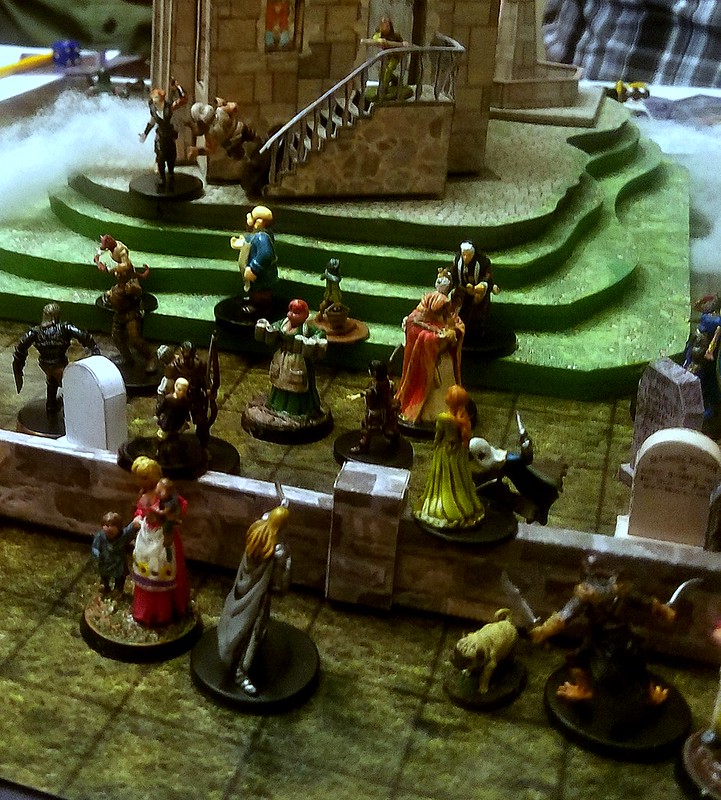 CRACK! The now un-reinforced doors of the church give way… 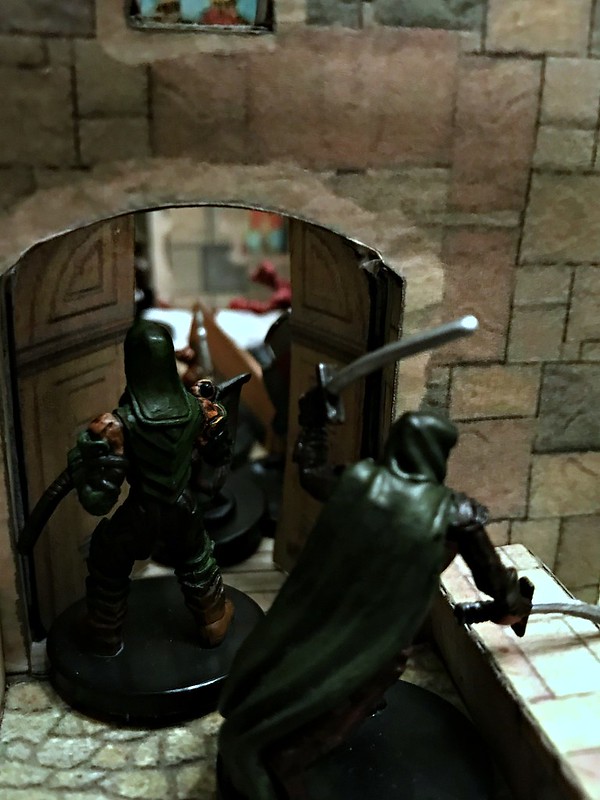 … and they rush in to find the building empty. 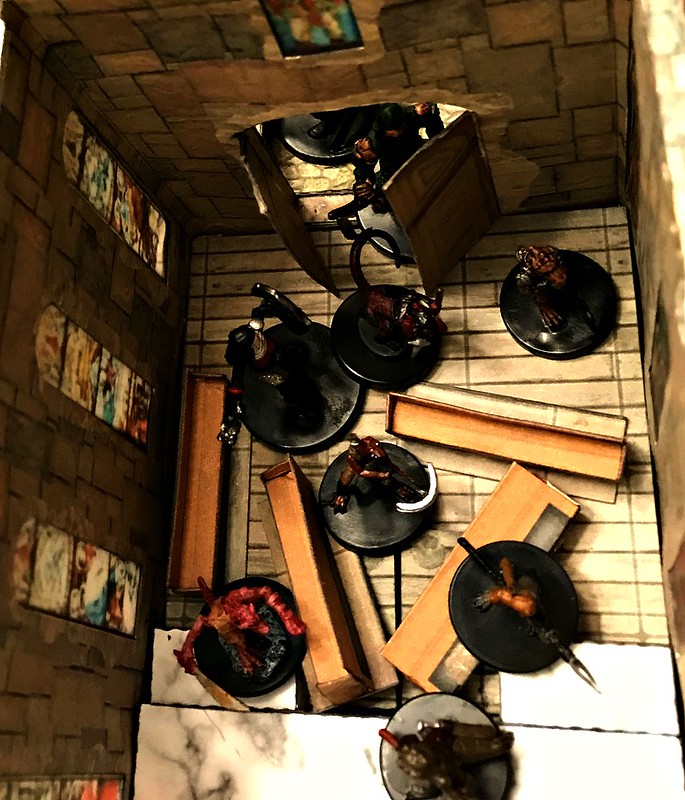 Their leader, a woman in a dragon mask, bursts out the back door just in time to see our heroes act as the rear guard for the townsfolk headed into the woods. She points at them, makes the “I see you” hand gesture, and shakes her fist as they just barely escape from view, heading back downhill toward the river to the tunnel and safely back to the keep. 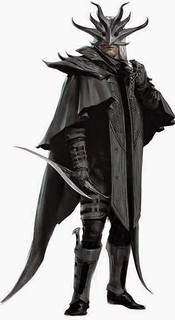 Clever thinking and more than a bit of luck lead to the rescue of those in the church! But who was the woman in the dragon mask? And why are they here?

Now that the enemy knows about the heroes, what will the enemy do with that information?

Find out next time in: The Longest Night 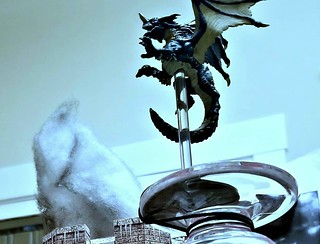