For the sake of prosperity,

Logically I must have had a father and mother at some point, I mean that only makes sense right? I can also safely assume one was an elf and was a human. But whether either of them are still alive or care if I am, I can only assume. The only family I am sure I ever had was Anker and my foster siblings. My first home was Makt Forge, Anker’s shop for magic items. That shop was my world once, it was once the source of every memory I had. And I made sure every last corner of my world was burned to the ground.

Let me explain. Makt Forge wasn’t just a shop or a forge, it was a foster home for over twenty magically gifted orphans. Anker wasn’t just a shopkeep and Artificer extraordinaire, he was also the closest thing any of us had for a parent. We would help him in the creation of magic items for his shop. We made everything from spell forged swords to clockwork bombs. I say ‘we’ but really ‘we’ were just Anker’s helpers. Whenever he needed a small runic inscription here or augmentation there that he couldn’t be bothered to do himself, ‘we’ would step in. Those of us not gifted in the finer art of Artificer-y would smelt or do heavy lifting. Me being a sorcerer, the magical equivalent of a slack jawed barbarian, I was very rarely called to do anything more delicate than smelting or lighting a fireplace. But Anker always made each of us feel like we had purpose, and for a while, it was good.

I was always good at lying to myself, and until I was 8 I was convinced our clientel was made of Adventurer’s and Heroes. In actuality our creations were being sold to murders, rapists, warlords, and monsters. I just had never known anything else than my life at Makt and rather than risk losing that; I remained indifferent.

When I turned 16 was when everything changed. For years work at the shop had slowed down, and I began to notice my siblings and myself acting strangely. We were prone to depression and fits of rage. Many of my siblings experienced extreme fatigue and hunger. One day they all just stopped moving. No sign of a struggle or of pain, they had just stopped breathing. It was then that I noticed seven were missing. How could I not have realized they were missing? In a panic I sought out Anker, and when I found him I saw seven of my brothers and sisters dead drained of all their blood, at his feet. He was standing over them holding a terrible plain white sword from hilt to tip. And it was…screaming. How could I not have realized the were missing?! There was something else, a small glowing sphere on a pedestal. When I looked at it I felt pain, I felt faint, I felt mad. I knew then that it was what had been killing me and my siblings. I didn’t know what was happening at the time, but I knew Anker had caused it. I wanted to set Anker and his wretched toys to flame, but before I could, he touched the glowing sphere and I fainted.

When I woke I was chained in the corner of the room, Anker was hunched over his desk making some scribbles in his dossier. The Artifacts were gone. Even If they weren’t in the hands of some foul demon, they would doubtless lead to nothing but strife and chaos whoever possessed them. I couldn’t think about it. So I just didn’t think, I’m pretty good at that. I just raised my power and shot flame to every corner of the room, I couldn’t beat Anker one on one but I could bring the forge down around him, and destroy him and his wretched creations. I don’t remember much after that; it was hot, it was lonely, I survived, and he didn’t.

With my home, my family, my entire life gone, I had time to think. Years of horrible creations, I personally helped him create were out in the world now. It was only right that my penance be to find them and destroy them. I was able to recover some of the pages of his sales dossier after the fire. Over the years its mostly worn out it’s usefulness, but it can still be helpful in pointing me in the right direction. However, I find it disturbing that I have still not found any clues as to what happened to the three vile Artifacts I saw with him before I made him dust in the wind. I have documented the little I know of them…

The Screaming Blade – A sentient sword with the souls of 3 of my former foster brothers and 4 of my sisters. It’s powerful, and it’s most distinct feature is it’s namesake, it screams.

The Leech Sphere – A glowing ball that sucks the magic and life energy from living beings. I’m not sure if it stores the energy somehow or if it’s sole purpose is to slowly drain energy from people, but either way…

The Unknown – This is more of a theory, but the more I think of it the more it disturbs me how little I knew of Anker. I don’t remember his face, his voice, and for the longest time I wasn’t sure he was a he. Even the name ‘Anker’, I..I don’t remember when I started calling him ‘Anker’. I only remember a ticking sound when I think of him. ‘The Unknown’ is what I have been calling a theoretically hypnotic device Anker used on us, it’s only tell being a slow ticking sound. From what I could gather it only worked over long periods of exposure, otherwise I’m sure he would have attempted to ensnare some of our clientele. I also suspect it was limited to suggestion and not outright mind control. If he had that, there would have been no need to chain me up when I confronted him. 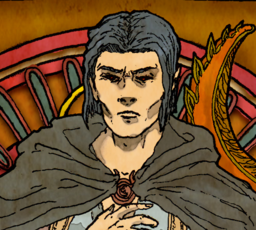