Born Dragan Harkos III, Agüero descended from a long line of celebrated dragoons. In his youth, he had already displayed great potential, prematurely earning him the nickname “Dragan the Dragon Killer.” Aspiring to carry on the family tradition, young Dragan worked hard to hone his craft. He spent many of his waking hours training to perfect his already formidable skills. After years of preparation, the time came for Dragan to take his sacred oaths. It was to be a long and arduous process, a perilous trial of strength and agility. Upon completion, Dragan would become a full-fledged dragoon. Sadly, he would be denied his long-awaited day.

On the eve of his trials, Dragan awoke to the smell of wine-soaked breath. Standing above him was his father, Ector, readying his spear over Dragan. Ector clumsily plunged his spear into the bed as Dragan evaded the strike. Confused, Dragan attempted to subdue his father, who only acknowledged Dragan as “Bastard.”

Unbeknownst to Dragan, Ector was made aware that Dragan was not his son. In a flurry of tears, Dragan’s mother confessed all. However, her incessant declarations of lover for Ector could not dissuade him. After drinking excessively for the duration of that evening, he had decided to murder Dragan.

Fortunately for Dragan, the otherwise deft and talented Ector was clumsy in his attempts. Nevertheless, the two battled within the small quarters of Dragan’s room. Suddenly, Dragan lost himself in the air of battle. When he came to, he found himself grasping Ector’s spear, The Longinus. The spear had penetrated Ector’s chest, killing him instantly. As a pool of warm blood began to pool at Dragan’s feet, he heard the sound of the city guards amassing at his house doors. He hesitated for a moment, but realized that there was no other way out of this. A man had died at his hands, and he is to be punished for this crime.

Throwing a few items into his satchel, Dragan leapt into the night, taking The Longinus lance with him.

For days, he wandered, seeking to distance himself as far as possible. What opportunities he might have seized, gone. Any honors that he could possible hope to attain vanished. He realized that Dragan Harkos III was now dead, and that a new man shall be born from this dark night. Henceforth, Dragan would be known as Agüero, the name of warrior he once read about as a child. With his spear in hand, Agüero ventured forth to forge a new life in the unknown lands.

While he still yearned to become a dragoon, Agüero decided that he must ply his trade at another profession: bounty hunting. Donning a helmet and cloak, he would search the lands for moderate bounties. At first, work was hard to come by, but he eventually caught the attention of many after tracking well-sought bounties. Eventually, his name circulated throughout the network of bounty hunters, earning him some level of acclaim. Soon, many were seeking Agüero’s services, though many were refused. On one hand, he did not wish for his notoriety to be made known all throughout. On the other hand, he only accepted bounty jobs that he felt served his code of justice.

To this day, he travels from place to place, seeking out his next target. Though he is usually out of sight, his clients often contact him through a middleman named Memnon. Speak with him, and you will 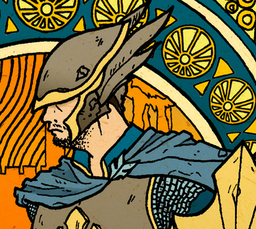