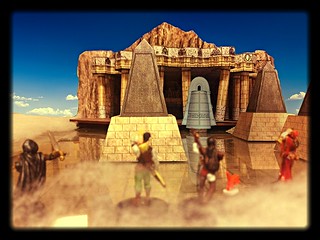 This is Mission 5 of DDAL05-01 Above the Clouds. You can start at the beginning if you want.

Your travels have now led you to this path, heading to the top of the highest summit in the Greypeak Mountains. Along the path, you notice strings of words written in Giant. 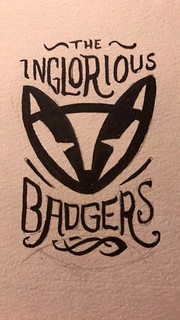 Several of our heroes, the Inglorious Badgers, can read Giantish and translate the mantras extolling the virtues of knowledge, magic, intelligence, meditation, and understanding.

They finally emerge above the clouds into the sunlight, and the scene is magnificent. 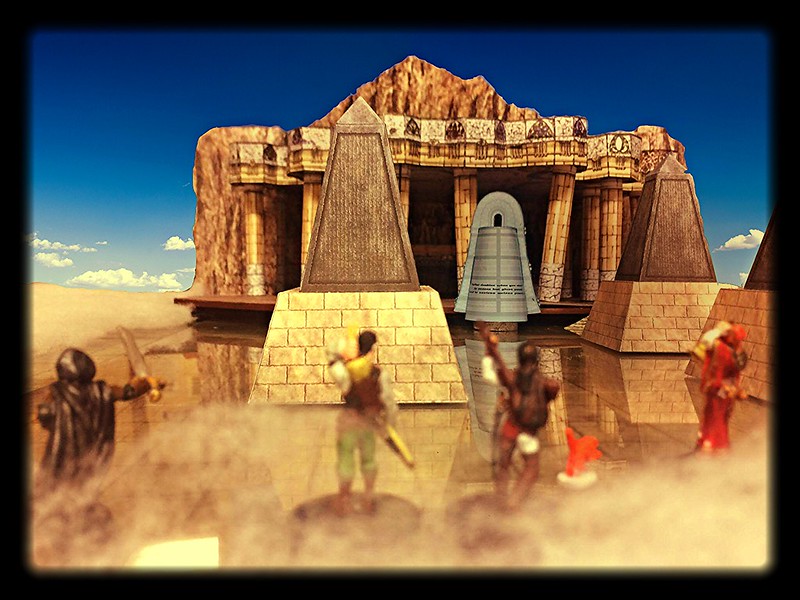 Directly ahead the mountain top has a built-in temple, with a huge brass bell floating in front of it. Attached to the bell is a huge mallet.

As they advance to study the massive monoliths lining the path forward, they are attacked! 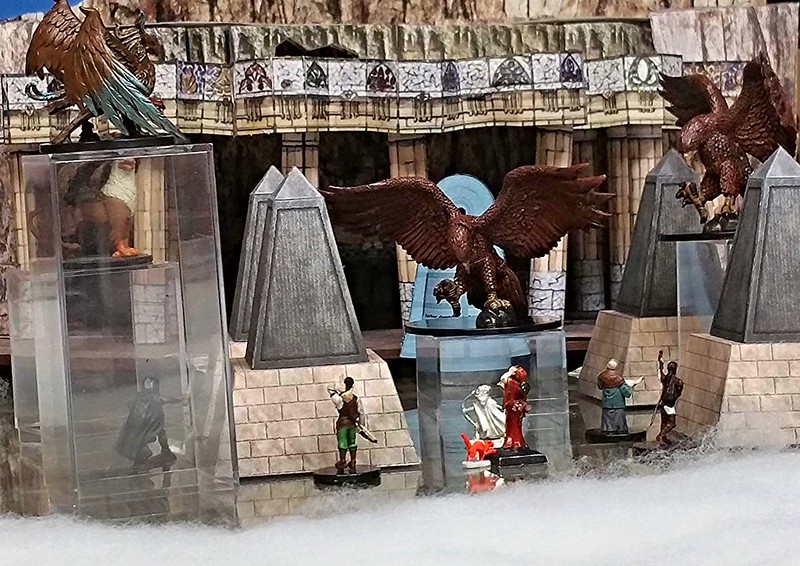 Giant Owls swoop down from above the shrine. The battle rages taking a toll on both sides. Attempts to parlay with the attackers lead nowhere, so it’s fowl for dinner! 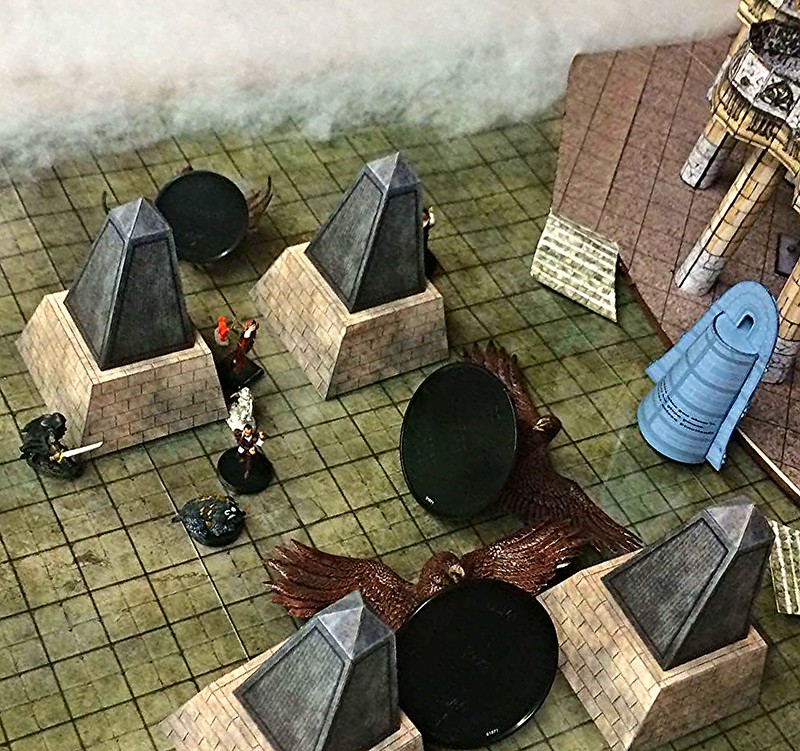 Approaching the bell, they notice an inscription in common [redacted spoiler.]: 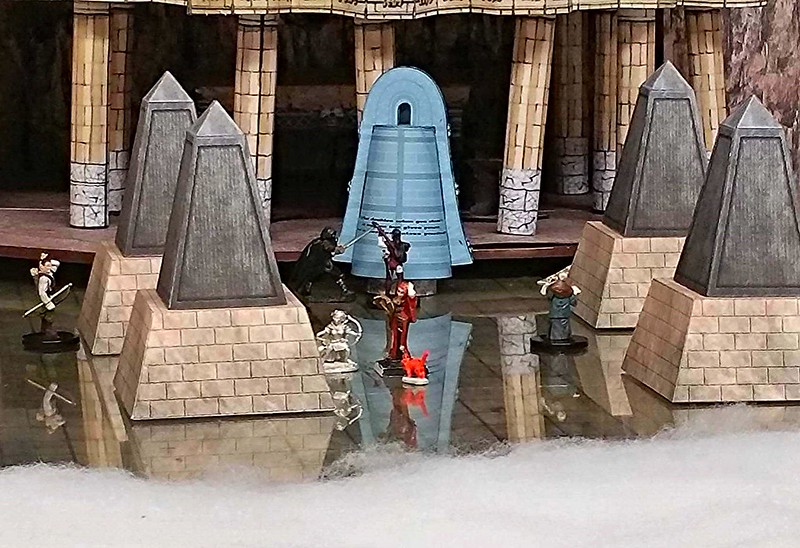 Before anything else, Aiindol can’t resist climbing up a rope to the area above the temple where the Giant Owls had been roosting… 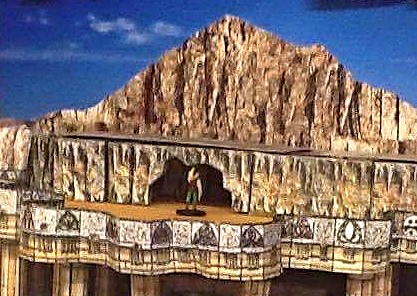 The rest of the group discovers that they can’t enter the abandoned shrine to Annam as it is warded by a sheet of magical force.
As Aiindol returns, they have their strongest member, the Paladin Nym, take the mallet, and ring the bell. It makes a dull THUD. 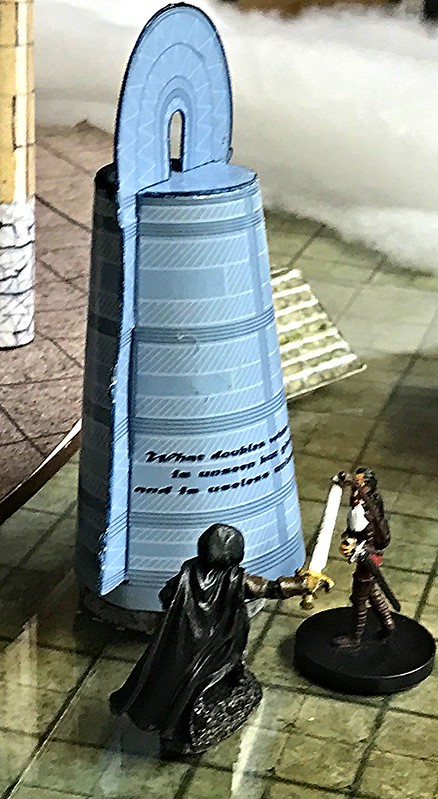 Gandry makes quick work of the meaning of the inscription, and they try speaking the indicated keyword as Nym tries again, this time ringing true a loud enough to echo down the mountainside.

The force-shield sparks briefly and deactivates, Sister Mercy installs a magical alarm near the bell, and they enter… 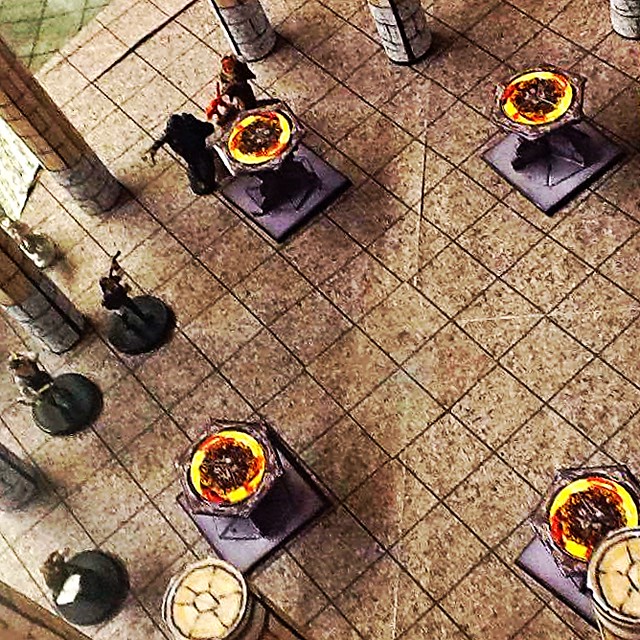 The shrine is huge, large enough for even the largest giant to enter without trouble. Four huge braziers decorate the room, the bowls dented and tarnished but still usable. At the northern end of the chamber is a huge long stone altar, 15-feet high, tattered cloth still decorates its top. The walls and ceiling look like they were once covered in painted decorations, but they are now too faded and worn to reveal what they once depicted. 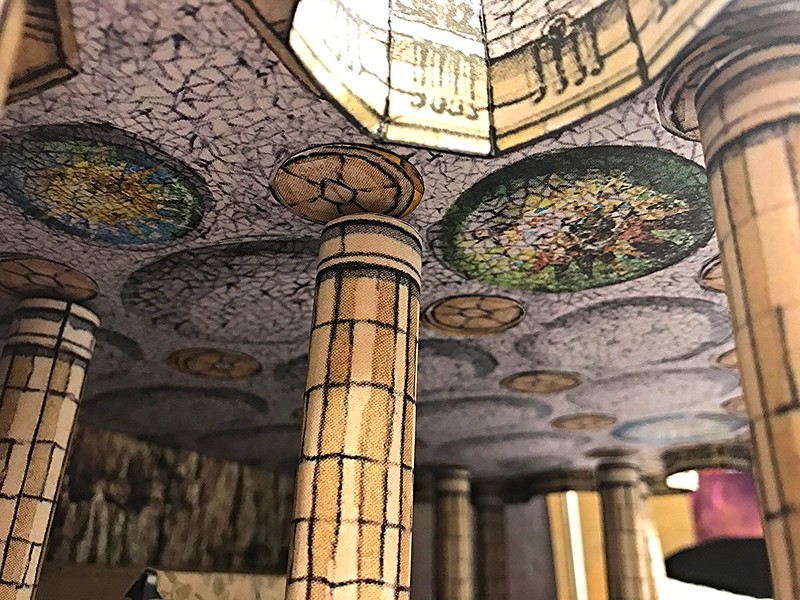 As they examine the area…

All four braziers erupt to life at the same time. Out of the two at the south end of the room burst what look like living icicles. They shriek and gibber in pain and frustration, their sharp claw clacking. 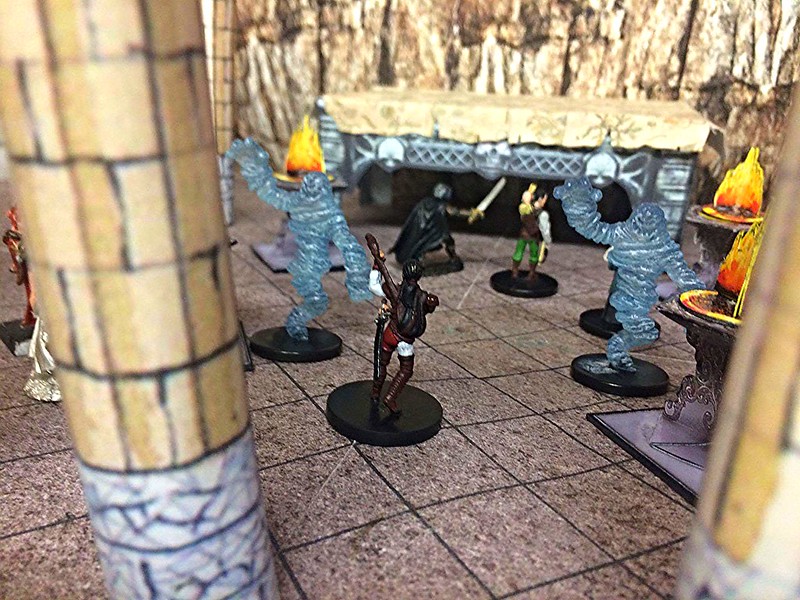 Their icy foes are hidden by a freezing fog and so must be engaged toe-to-toe, but eventually are defeated. But the ice shards flow back to the braziers and instantly super-heats into Steam Mephits. 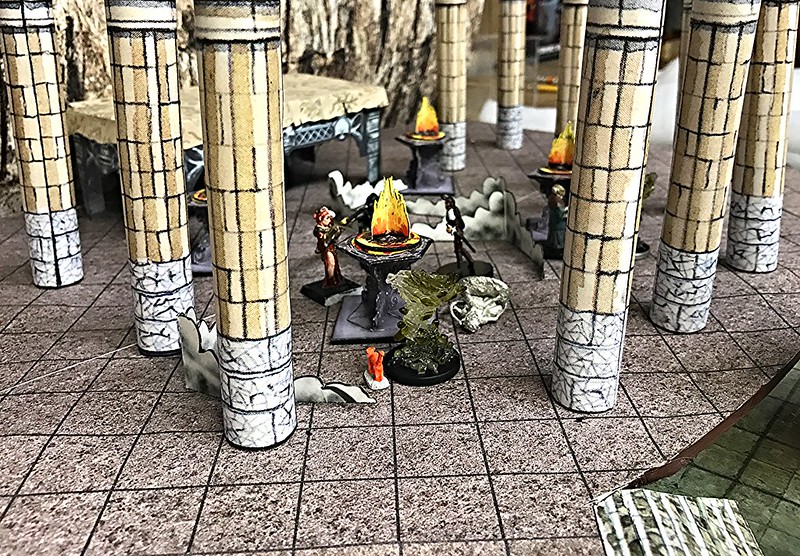 “Some guardians!” exclaims the Professor. “But I don’t see any sign of what they were guarding!”

Their wizard, Mercy uses Mage Hand to lift her cat to the top of the altar, which is blocked to them simply due to it’s impressive height!

The cat starts licking at something, and so Aiindol quickly follows… 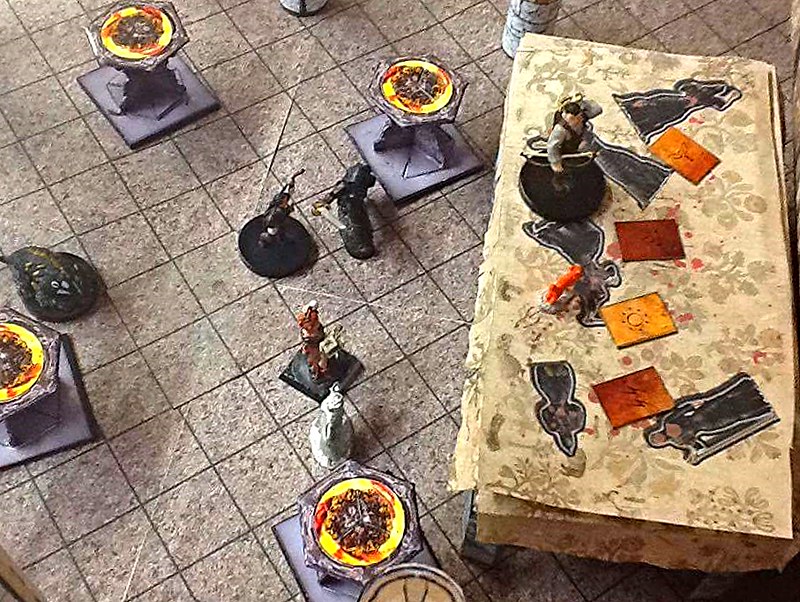 …finding the bodies of five Dragon cultists, obviously slain by the Mefits and 4 HUGE 100lb slabs of gold, inscribed with the runes of the virtues of the followers of Annam. Though this desecration disturbed both Nym and the professor, they did little to stop it.

Abcde, still suffering from the Curse of Greed hears of them and asked to be tossed up to collect one – clearly that amount of gold is a fortune.

Soon they have removed all of the slabs from the Altar and are devising methods for carrying them down the mountain, when Sister Mercy’s alarm goes off!

A storm giant arrives at the temple: 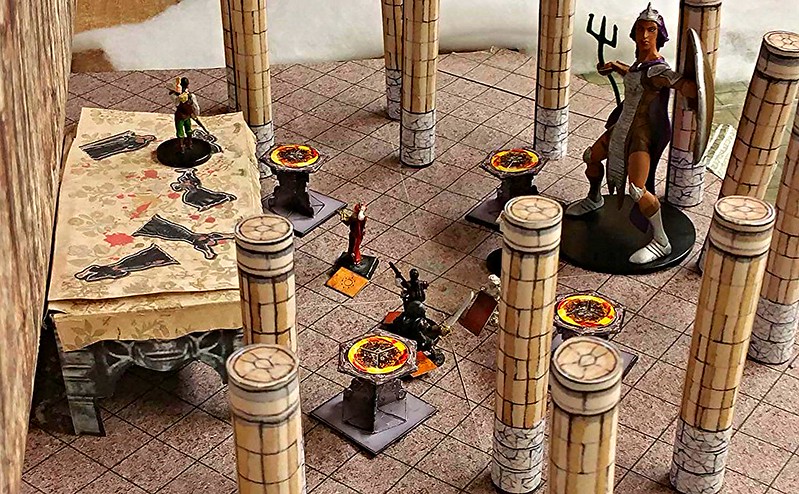 In a booming voice that is at the same time contemplative and commanding, the enormous figure speaks. “I assume you are not here simply to loot this ancient, holy site. You can trust me on what I am about to say, because I have never spoken a truer statement in my life: Annam the All-Father is in no mood to be trifled with.” The storm giant chuckles before he continues, but there is a sadness behind his humor.
“I am Kraddokk. I was told that this shrine was desecrated several days ago, and I have come to see what state the place was left in. What brings you here?”

[Redacted dialog] in which they learn that since the failure of the Dragon Cult to restore Tiamat, the giants have rushed in to fill the power vacuum – but battle amongst themselves about who should rule…

Kraddokk does not stop them from taking the tablets, but watches with burning eyes as they leave… 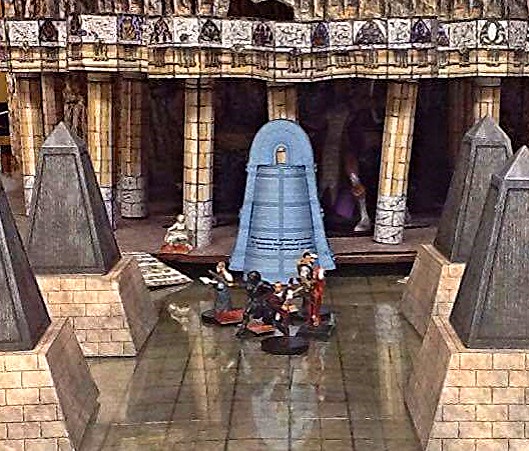 They struggle down the mountainside with the heavy load, thinking they’d found real value on this, up till now, failure of a treasure hunt – only to learn that they were now cursed to be Hated by Giants for stealing the slabs. No one anywhere would buy them at any price. 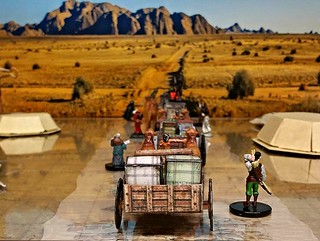