Mission 1: Beneath the Hills

The first adventure is DDAL05-01 Treasure of the Broken Hoard, by Shawn Merwin

One of the most famous treasure hunters in the Realms, Veradda Stoor, has put out a call for assistance in tracking down caches of treasure hidden by the now-defunct Cult of the Dragon in the Greypeak Mountains.

Through luck, skill, and the intervention of your faction, you have been chosen to assist her. You were told to meet her in a clearing along the Black Road, east of the village of Parnast. 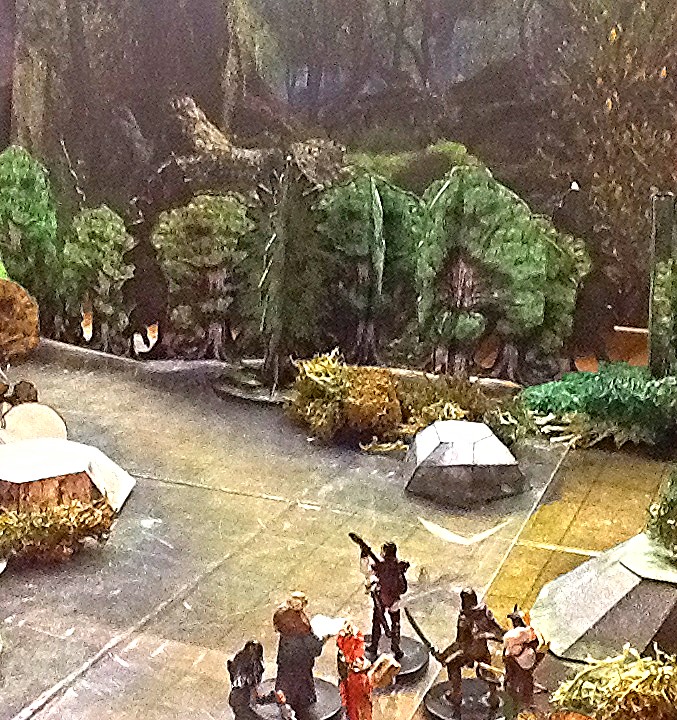 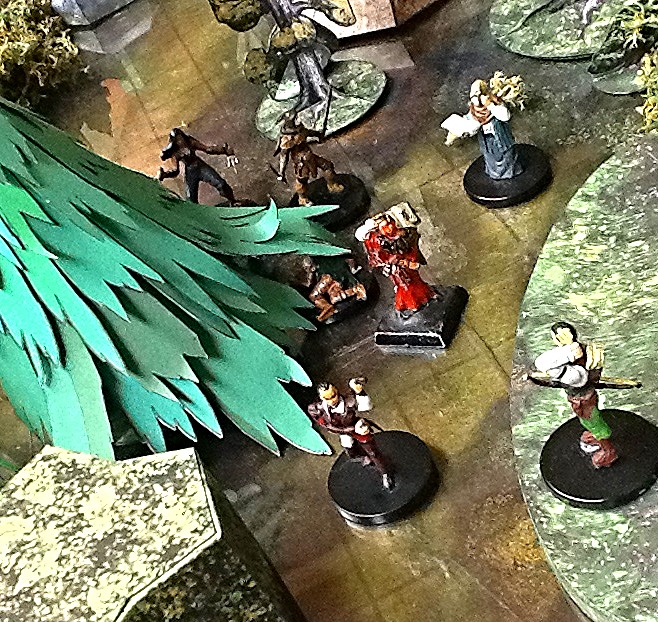 …to a dead body, hastily hidden under a great evergreen. He searches the body, concluding this is their intended host – and then calls the others over.

She was killed, and most of her items were taken or destroyed – especially her journal. Luckily, her murderers didn’t have the time to search her thoroughly – and there were 5 small scrolls with notes about where they were to look for the former Dragon Hoard’s treasure…

The First Cache. The first treasure cache was hidden by the Cult of the Dragon in an abandoned cave at the base at of the southernmost mountain in the Greypeak range. While it was thought to be the smallest of the caches, it is also not thought to be protected by any traps or magic. The caves and tunnels of the complex, according to my sources, are not very structurally sound. Goblins are known to inhabit the area.

Nym: “So, we continue the mission, yes?”, and the party agrees “For my Faction! For Glory! For Veradda!”…

Mission: Beneath the Hills

After traveling a few hours, they come to the cave – and there are signs of many tracks – goblin tracks and at least one giant – going into the cave. They enter: 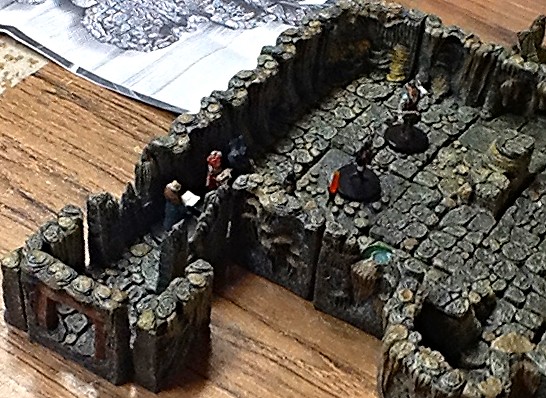 The large cavern is empty of living creatures, although several lanterns around the room provide light. Rubble is piled up three feet high in several places throughout the cavern, and two tunnels lead out. The tunnel on the south wall is clear, but the tunnel to the east is chocked with debris. Dust still rides the zephyrs circulating through the cavern, leading you to believe the cave-in to the east was recent. 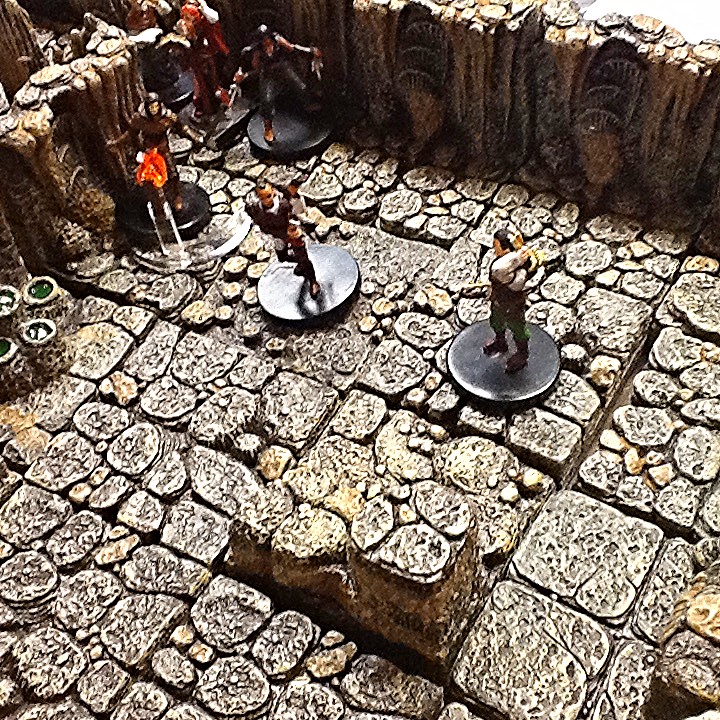 Nym moves across the chamber toward the cave-in and notices something, “I found a giant! Well, a dead one – if there’s a body to go with those feet under that cave in.”

Just then, goblins attack from behind several stone piles… 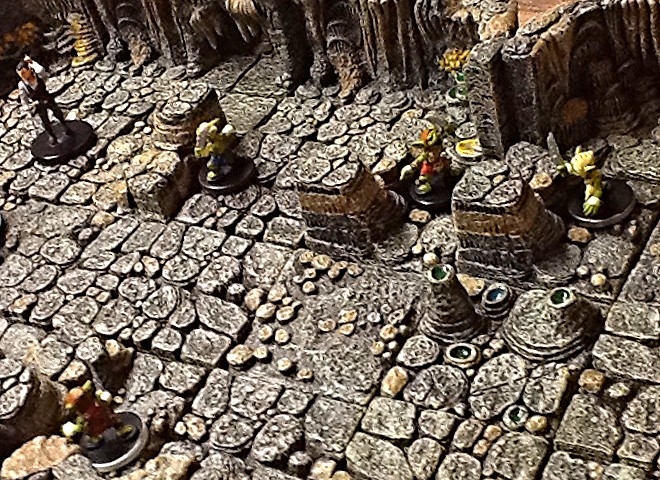 Even More, Even Smaller Problems

A scurrying sound and some high-pitched squeaking echo from the south tunnel. You look, expecting to see rats or some other vermin swarming toward you. Instead, you see an angry looking swarm of goblins. These goblins, however, are no larger than mice. Their tiny scimitars and shields seem almost comical at first, until you realize just how many of them there are.

They quickly swarm over Nym and Aiindol… 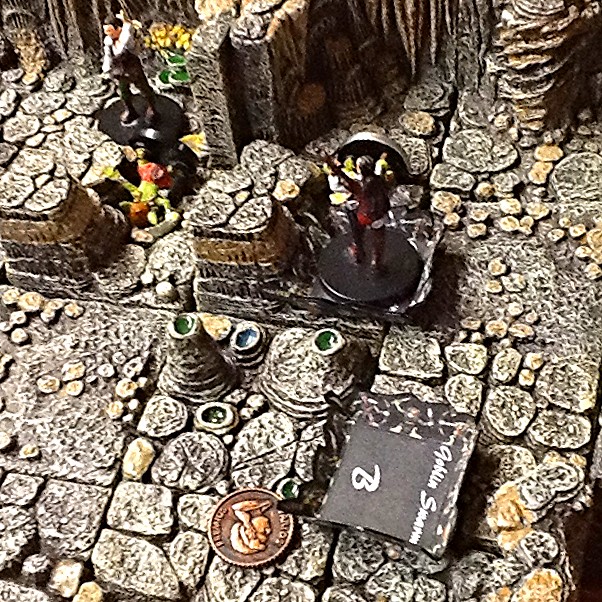 Custom made goblin swarms made by me

There were was oil, fire, spells, and wild swinging to defeat the swarm (as each attack hit, the “shrunk” goblin returned to full size, causing quite a mess…

The rogues enter the next chamber silently and scout ahead, seeing something very strange, indeed.

This cavern, like the last, is lit with lanterns throughout. To the north, at the far end of the corridor, you can see a small creature dressed in ratty furs, wielding a club. He stands in front of a stone chest that is even with his eyes. His back is to you, and you catch the sound of angry rumbling coming from his direction, but it is too faint to hear clearly. 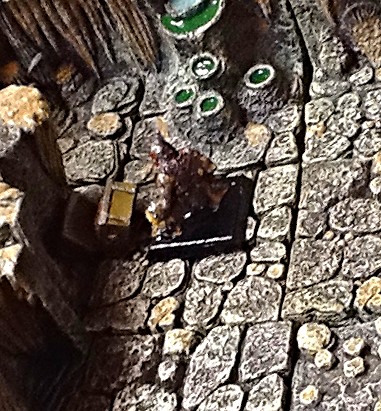 As the party positions for a surprise attack, Nym notices a black creature the size of a house cat in the northwest niche – “Wait! That’s a tiny black bear!” he thinks.

“It’s noticed me!” – he lets loose an arrow – and it finds it’s mark – killing the cat/bear – which immediately returned to it’s full size.

“WHAAT! Blooddrinker! Who has slain you! Slayermighty will avenge you!” – Normally, this pronouncement from a Hill Giant would reverberate through the cave like thunder. But given Slayermighty’s decreased size, it sounded more like
it was pronounced by an irritated gerbil.

The mini-Giant charged the group, but was no match – and soon there was a huge giant body on prostrate before them. 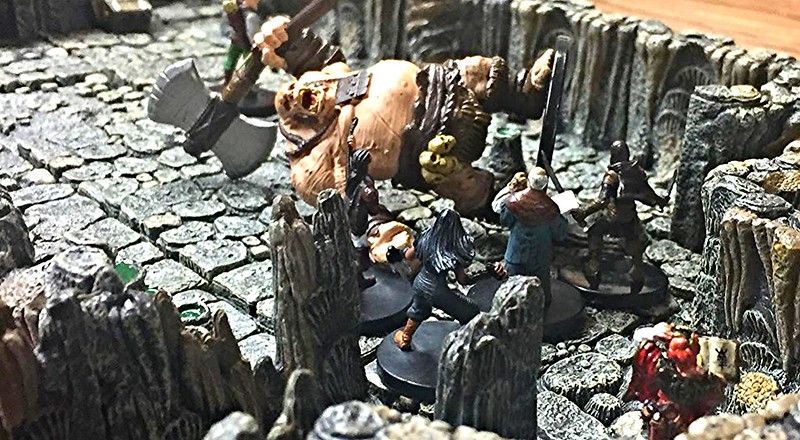 The stone chest was empty, except for a note:

“Stupid runt-giants of the hills, You are too slow and dim-witted to challenge us. The treasure is ours. You are probably feeling small now, aren’t you? If you think you are going to prevail, you are mistaken. By the way, prevail means win, idiots.

Clan True-Nimbus of the Clouds"

The professor pipes up: “That’s peculiar, damn’d peculiar. Giant’s aren’t supposed to fight with each other, or even harm one another.”

Next Mission: Upon the Stones 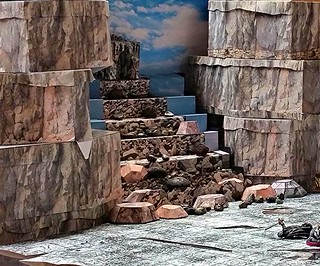