Hoard of the Dragon Queen, Chapter 1

NOTE: My group has been changing members, and some are new to D&D, so they are starting a new party. Their story starts almost two years ago game time…

Hoard of the Dragon Queen: Chapter 1

A New Chapter in a New City

“Where are we going?”, the voice was that of a young child, but the sound was coming out of a man-like figure with a giant Raven’s head – a Kenku. “To meet someone, at the Inn of the Yawning Portal. He’s got work for us” answers a kobold dressed in fine plate armor speaking broken common. “I hope you packed for a journey.”

The bird-man answered in the kobold-paladin’s own voice “Pack for a week, at least. And I don’t mean just seed!”. The paladin grunts, “I don’t know if I’ll ever get used to that…” 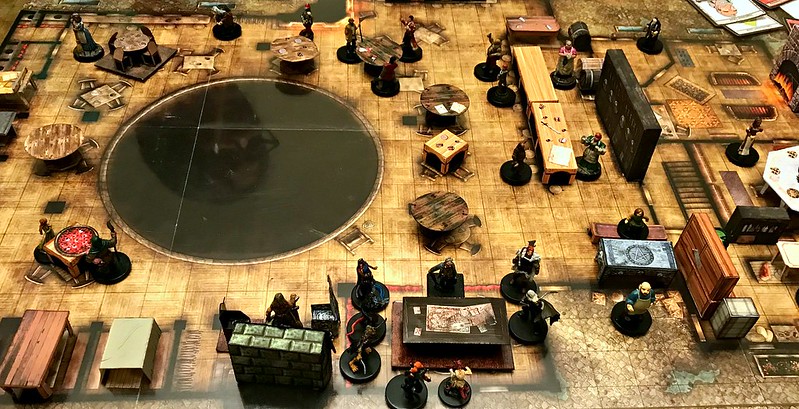 The party arrives in twos and threes into the appointed private meeting room. Some of them know each other and have clearly been here before, others are new.

A gray haired man arrives, “That’s Bosnun, our contact” the Tiefling Sorcerer notes quietly. Soon after Bosnun he speaks “Hello, Charley” and the obsidian stone in the middle of the large table comes to life, with the flicker of a red pinprick light. 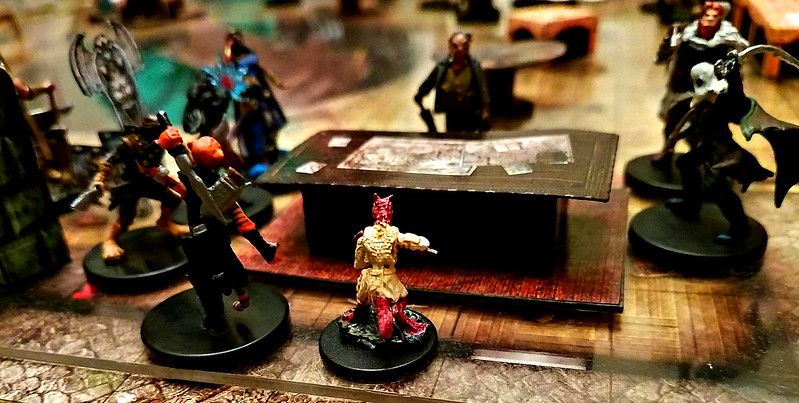 “Hello! I’m Charles Foresite – and welcome to the new recruits. You friends have spoken of you highly.” The standard orientation for the Foresite Irregulars follows, including the lending of the magical items.

“…with that all settled, here’s your mission. I’d like you to go to Greenest and look for Leosin Erlanthar – an acquaintance of mine that has been doing some research in that area for me. I lost contact with him, and am concerned for his well being. Please find out what has happened to him and his research, and provide any aide he may require.”

They leave the next day at dawn…

For the past several days, you have been traveling a road that winds lazily across the rolling grasslands of the Greenfields. Sundown is approaching when you top a rise and see the town of Greenest just a few short miles away. But instead of the pleasant, welcoming town you expected, you see columns of black smoke rising from burning buildings, running figures that are little more than dots at this distance, and a dark, winged shape wheeling low over the keep that rises above the center of the town. Greenest is being attacked by a dragon! 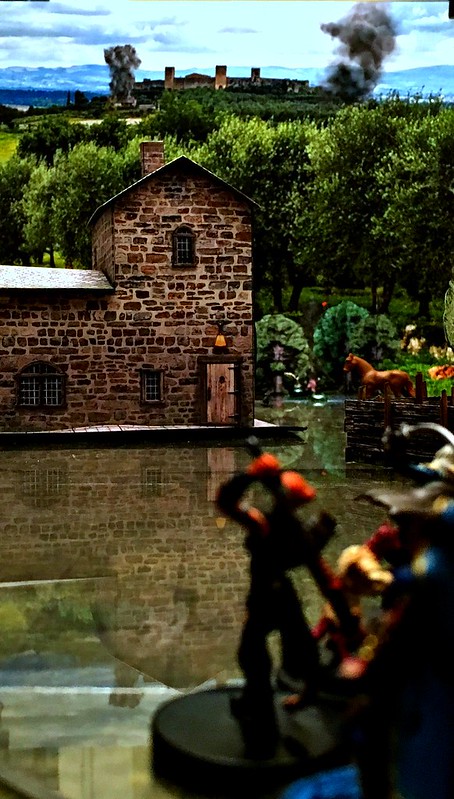 They hasten their step as the approach a farmhouse, a limping farmer and his dog burst out the door and rush toward a livestock pen, where a half dozen kobolds were about to release or slaughter the animals. 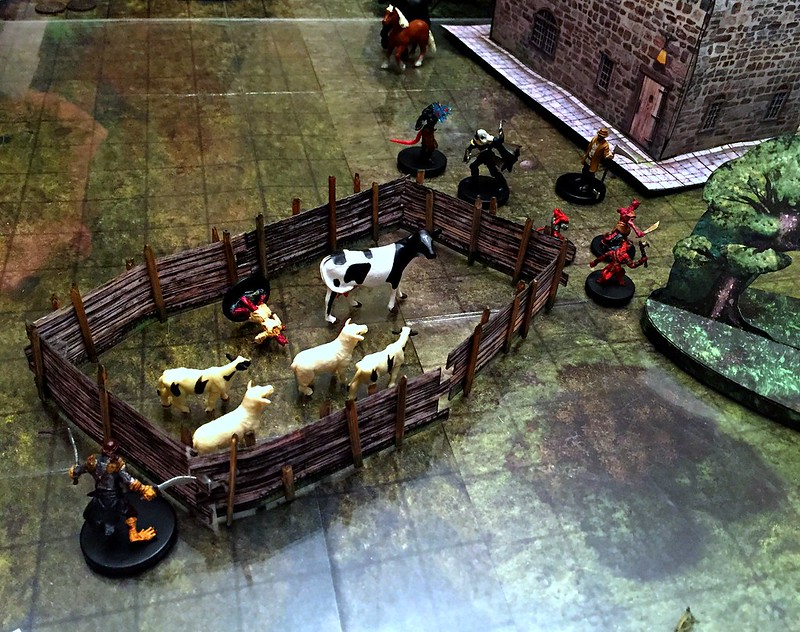 The kobold paladin quickly climbs into the pen to intervene, confusing the attackers. 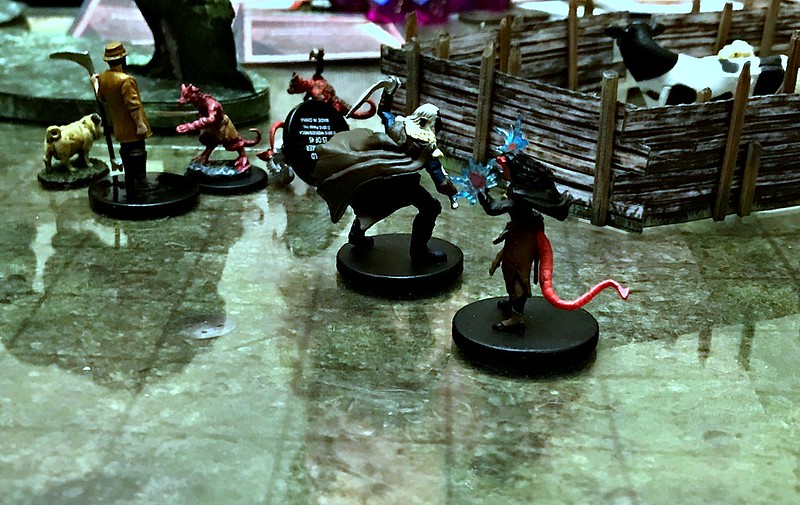 During the fighting, more kobolds come from the direction of the town, taking the bridge, sealing the farmer off… 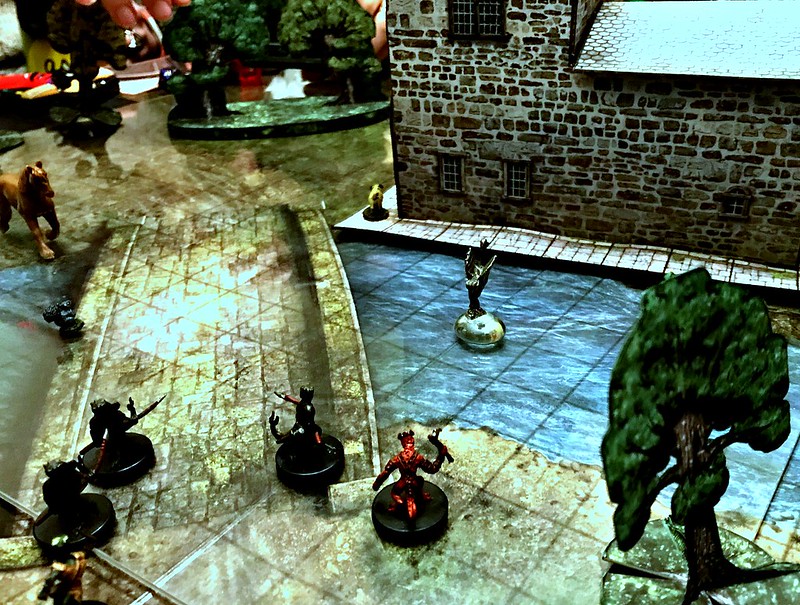 Then the farm wife (who is armed!) and three children run out the door shouting “More monsters! We must get across the bridge and up to the keep to be safe!” 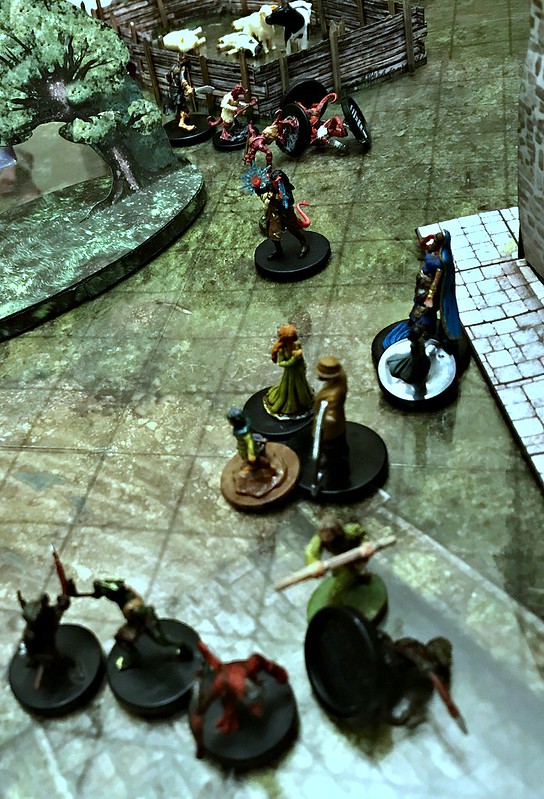 While the Barbarian and Cleric fight off another group… 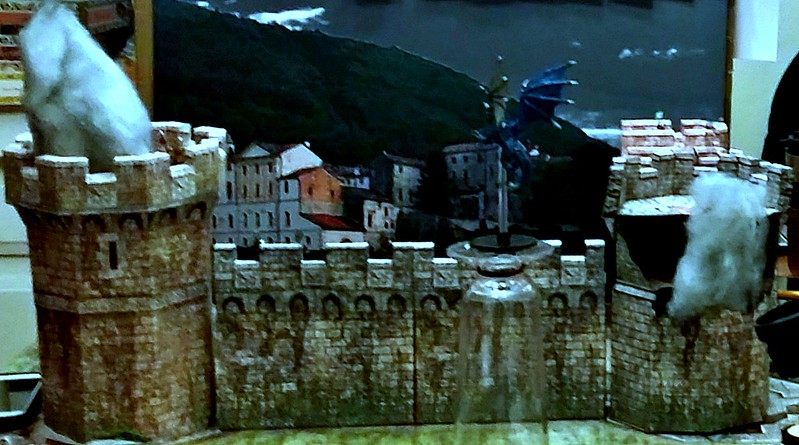 For better part of the next hour, the party gathers more folk from their hiding places to escort them to the keep. To speed progress, the Paladin, Tabaxi Druid, and Bard carry as many small children as possible 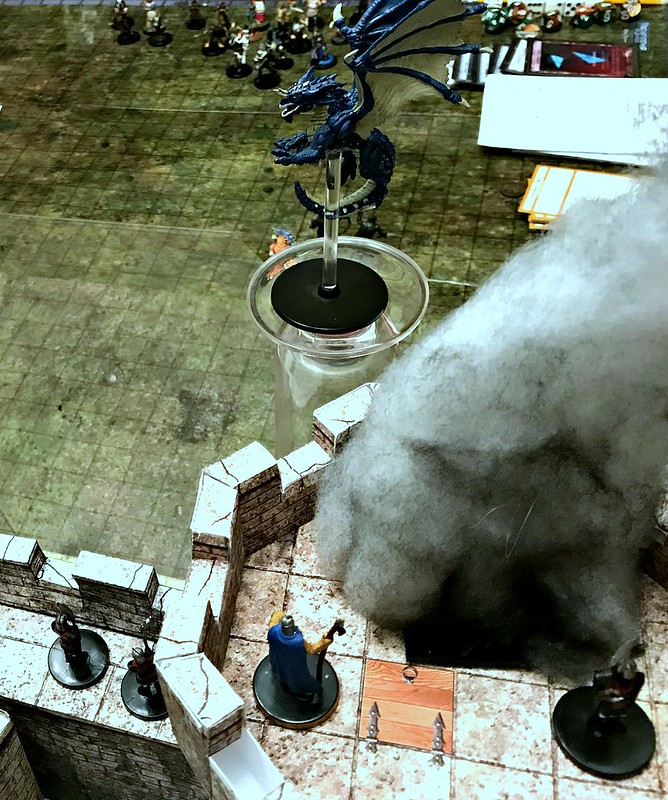 … but there’s a Dragon attacking the keep!

and the enemy has gathered minions and magicians to stop the exodus!

Those who aren’t carrying children engage the armies of darkness, while the Druid spreads the smoke from fires lit by the Blue Dragon’s earlier lighting attacks into a ground fog; providing cover! 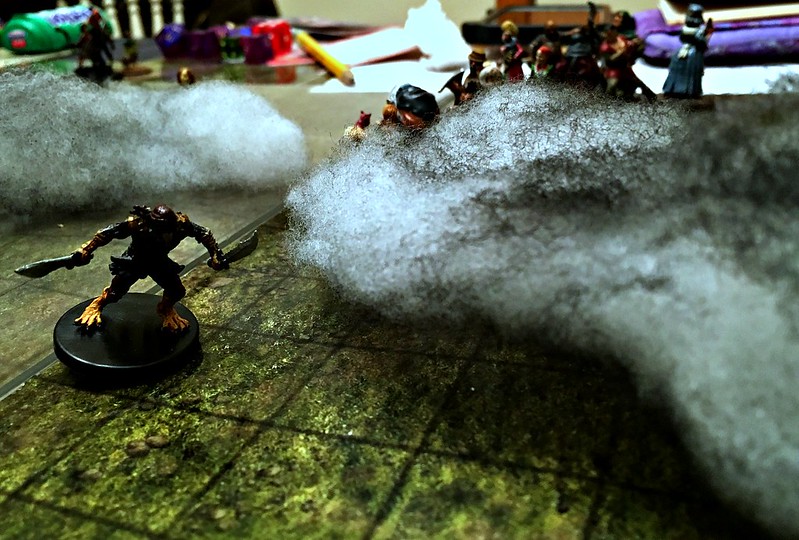 While the Barbarian, Tiefling Sorcerer, Kenku Rogue, and Drow Cleric keep them busy (at the cost of much blood) – the townsfolk make it into the keep! Not a soul lost! 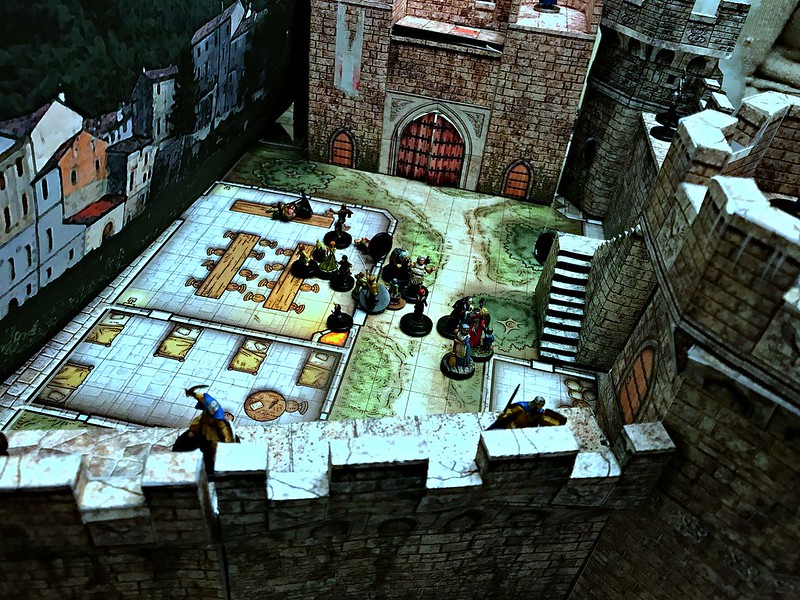 The escorts run back to their allies in order to cover them as they retreat to the keep, just as the gate is closing! 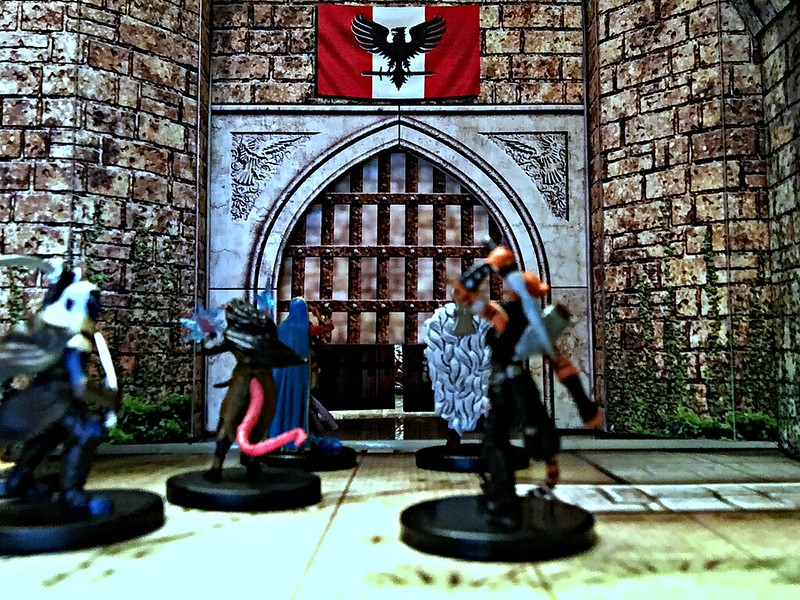 Though the townsfolk they came across are all saved, is there anyone else out there? Why is this town being attacked? Will the keep hold against the dragon? And, where is Leosin Erlanthar?

Find out next time in: Defenders of Greenest 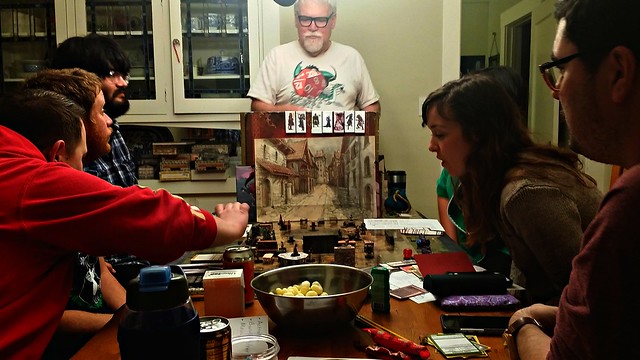