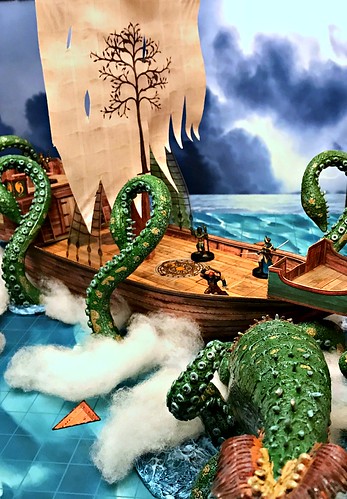 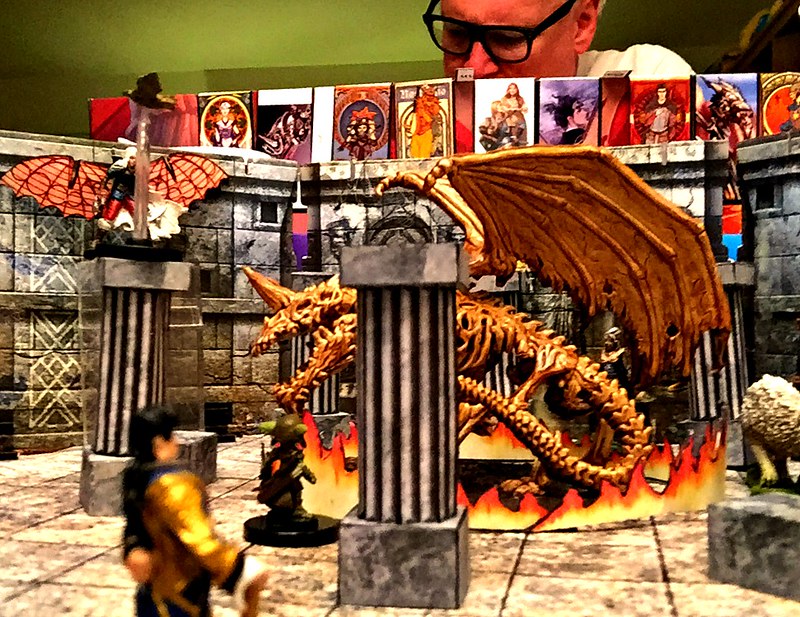 After using the gate to return the magi from each of the Forsite Irregular to their group, it became clear that the enemy had detected their movement, and The Aboleth would need to depart immediately on horseback to put as much distance between themselves and the well known focus of power that is Cleoragard.

About 10 days out, their FI sending stone activates – something that should only happen if there were an emergency, since they’d decided to go “dark” for fear of eavesdropping. 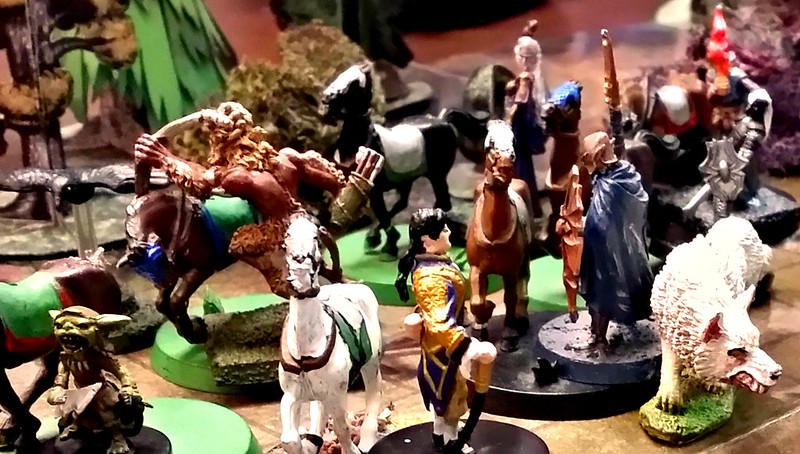 It was a male voice calling them from Team Efreet aboard the sailing ship Steadfast: His voice was at a shout, and was mostly drown out by the sound of intense downpour, thunder, and crashing waves… 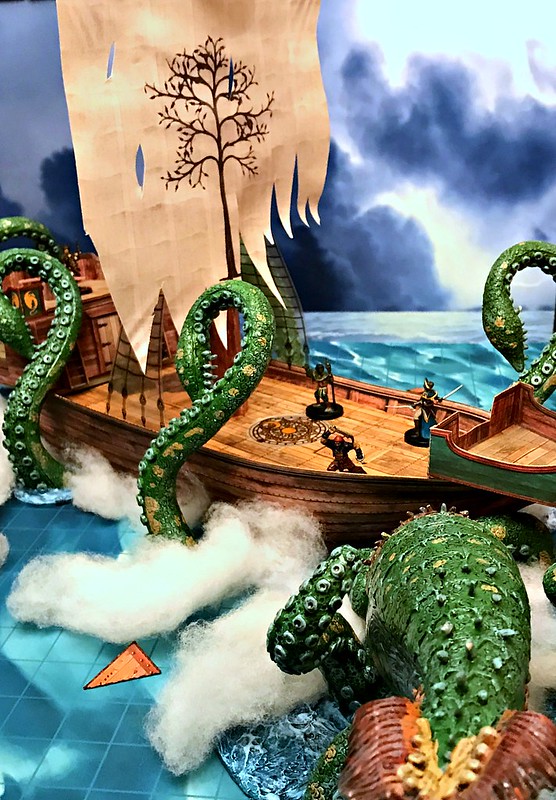 “… under attack … Sea Titan …. need assistance … Florynsael!…” and then the signal cuts off as it sounded like the stone was cast into the sea.

“We must stop immediately, place the portal, and see if we can envessel that titan! Or at least rescue the team!”, commanded Florynsael. 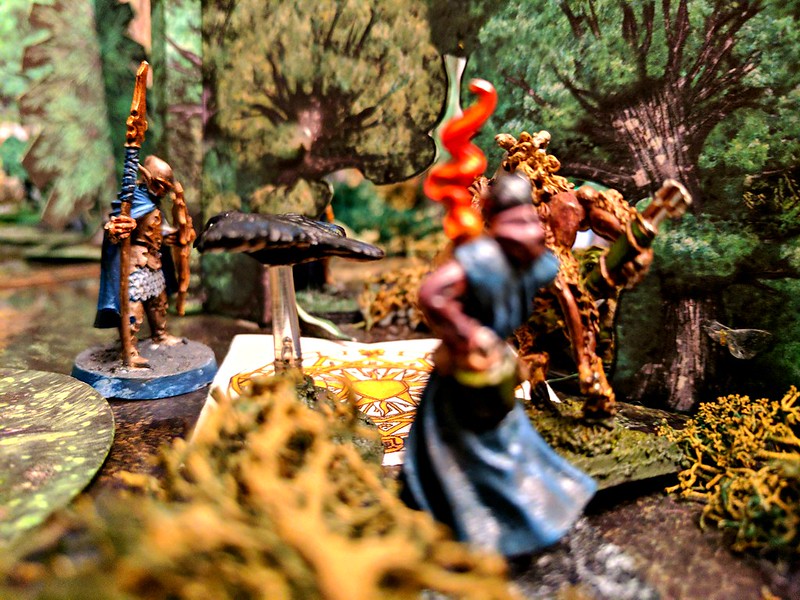 J’an’ka’kar (their Drow guard): “I am useless at sea, mistriss.” Shiraz: “As am I – Shall we guard the rune and protect the horses?” 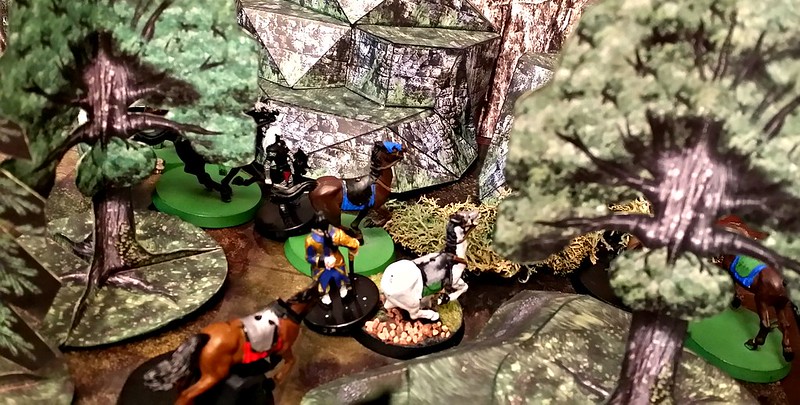 Team Aboleth arrives on the deck of the Steadfast just as the great beast quakes the ship violently, causing several to stumble. 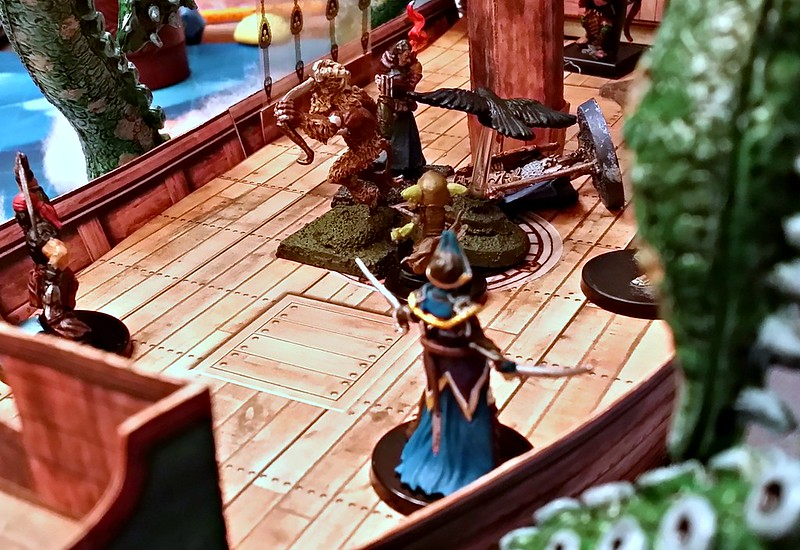 Clearly, nothing could prepare them for the magnitude of the attack, and the threat to life and limb. 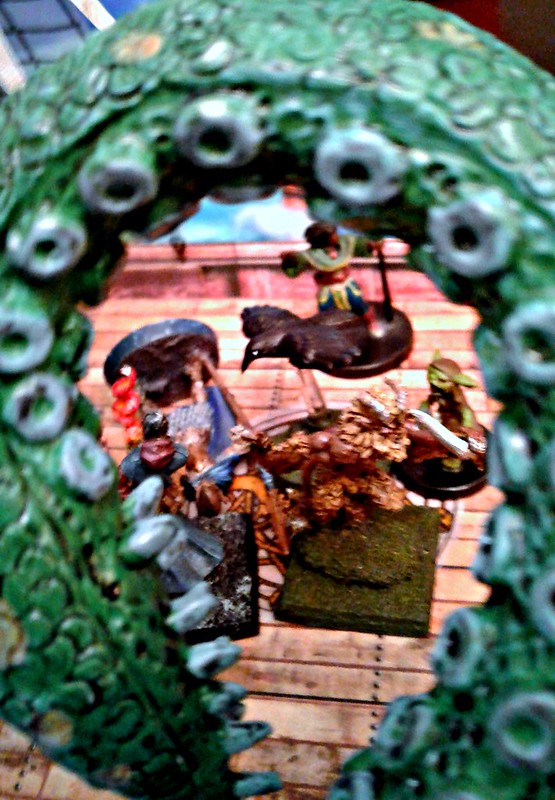 Just as they are getting their bearings, several of the Steadfast’s crew are snatched up into the monsters great tentacles and either crushed or cast into the sea. 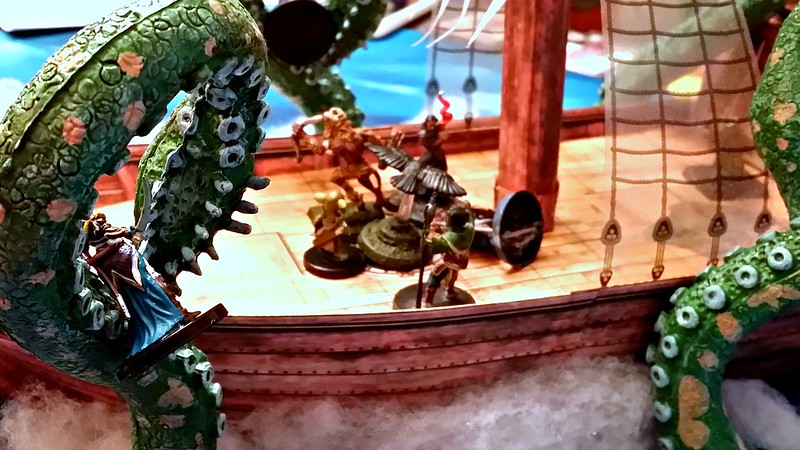 Eachann (pronounced ee-ann), the voice from the stone shouts that when the attack started, Dugan immediately transformed into the Stone Titan while on deck, which caused the ship to list, and he fell into the ocean.. “And, well, sunk like a rock!”

“Oh, here! Take these!”, he says as he hands out three veil’s of water breathing, “in case you get tossed.” 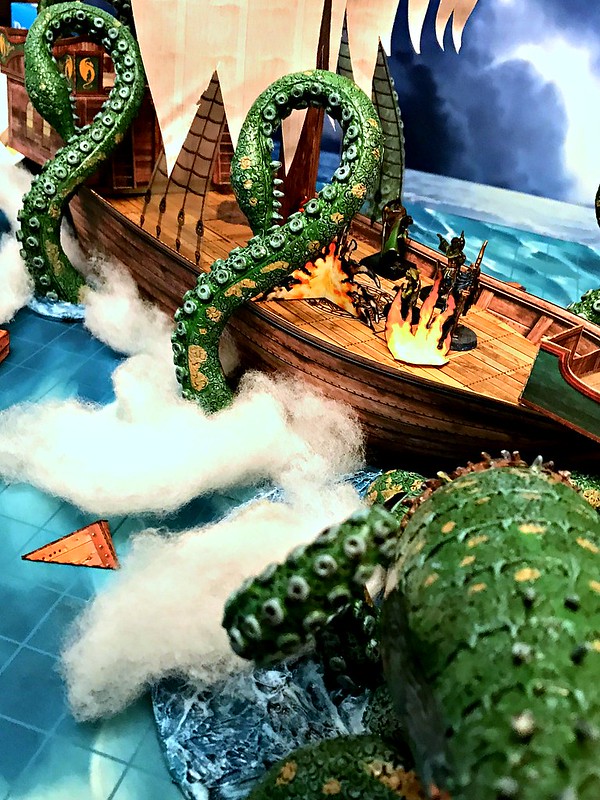 “It seems this Titan can control lightening – it’s fried most of the rest of Team Efreet and set fires all over the ship. Oh – No! Not the sail!” 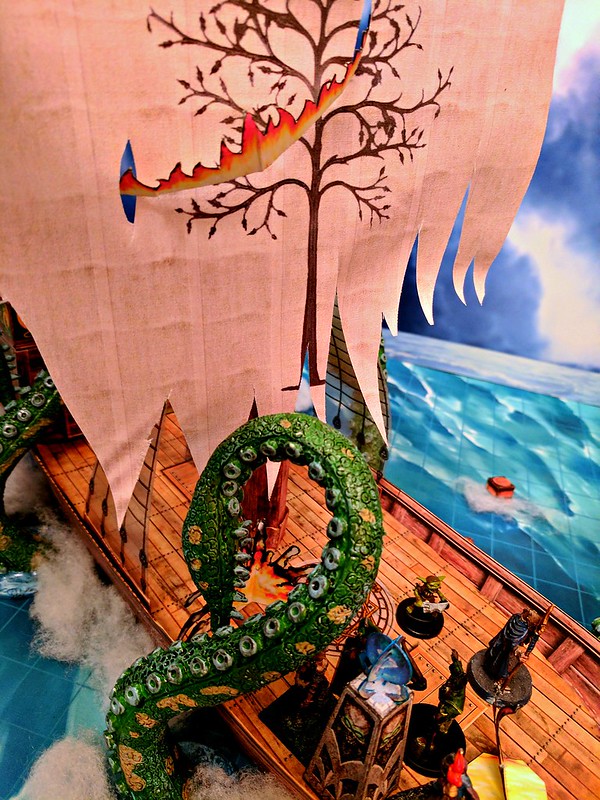 “We need a sail and a rudder to control the ship – if we lose both, the beast’ll sink us in a matter of seconds!” – the voice is that of Alta Tuncarvit – who is doing her best to protect whoever she can with her technological wards. 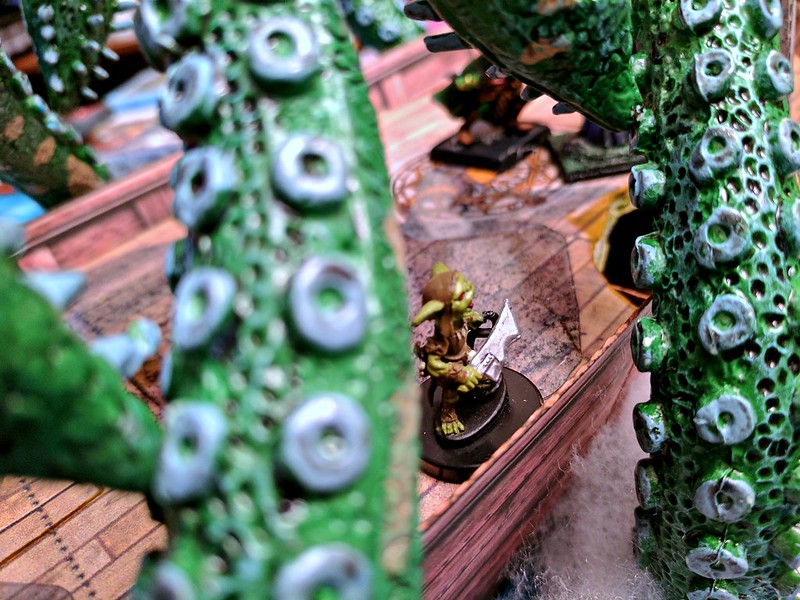 Shute: “We need to split into two teams: One focus on keeping the Titan busy, and the other focused on preparing the envessling” 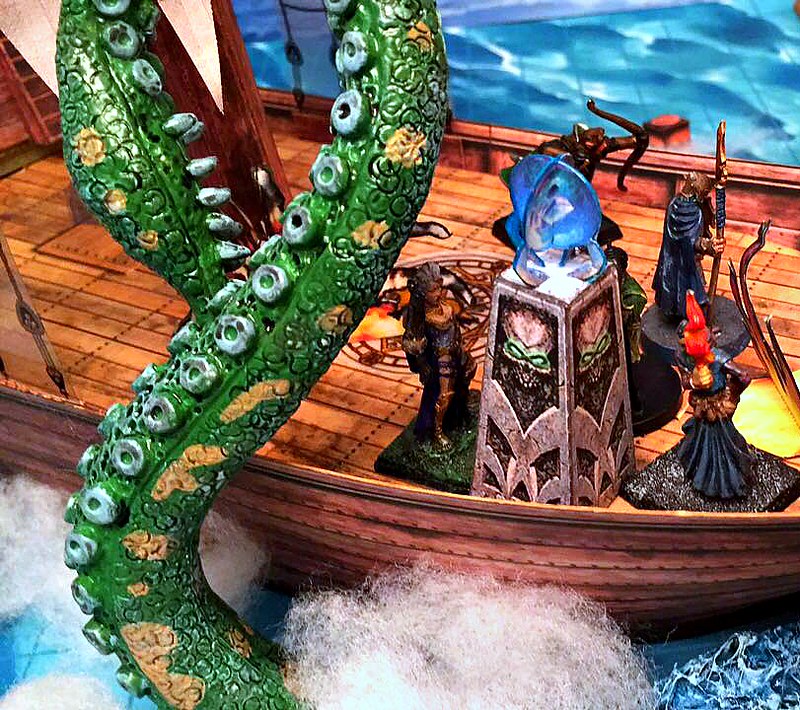 Florynsael: “Setting up the altar is the easy part. Our big problem is that we don’t have a vessel, much less a ‘compatible’ one! Remember what happened with Duggan? We need a sea-elf, or bullywug, or something…”

Eachann makes his voice clear and determined: “I will do it.”

Nostalgio: “Beggars can’t be choosers. Let’s do this.” 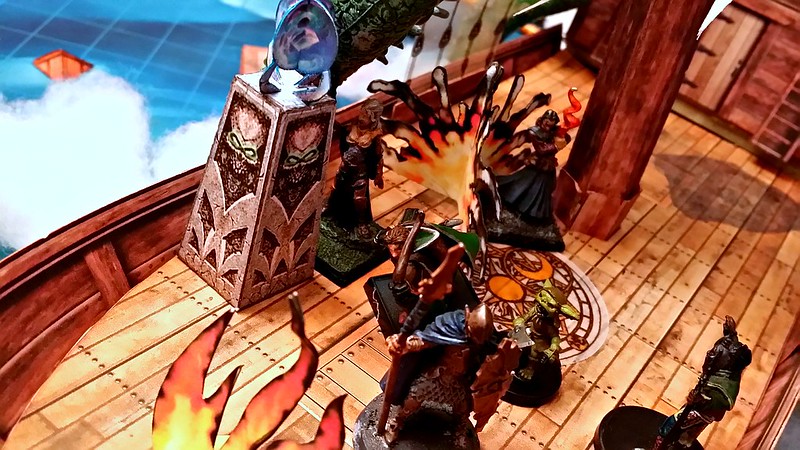 Time is of the essence as the battle continues, the sail is seriously damaged, limiting maneuverability and water is flooding the deck. The titan is systematically thinning its opponents while continually trashing the ship…

“Let’s make it harder for him to see what we’re doing, eh?” quips Eachann as he summons a cloud of fog over the ritual casters. 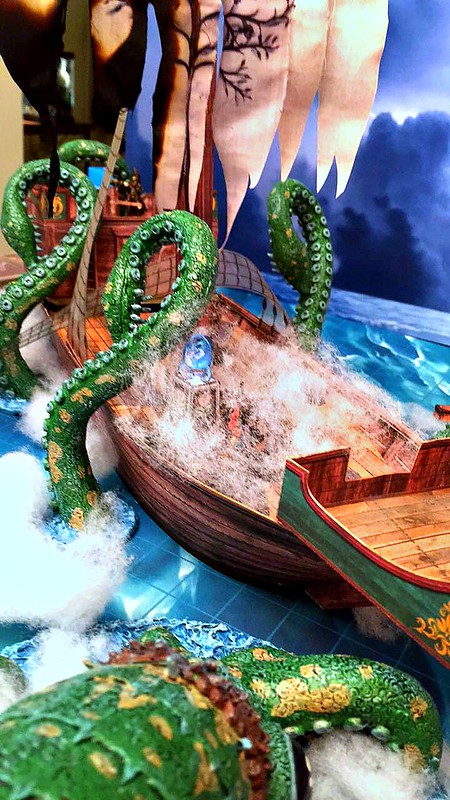 The ritual is underway, but it is supposed to take ten minutes. They’ll be lucky if the ship survives for the next 30 seconds. The sorcerer Edryd attempts something unprecedented and continually uses his magical energies to focus exclusively on accelerating Flrynsael’s ritual. The excess energy is clearly taking a toll on her, but she perseveres. 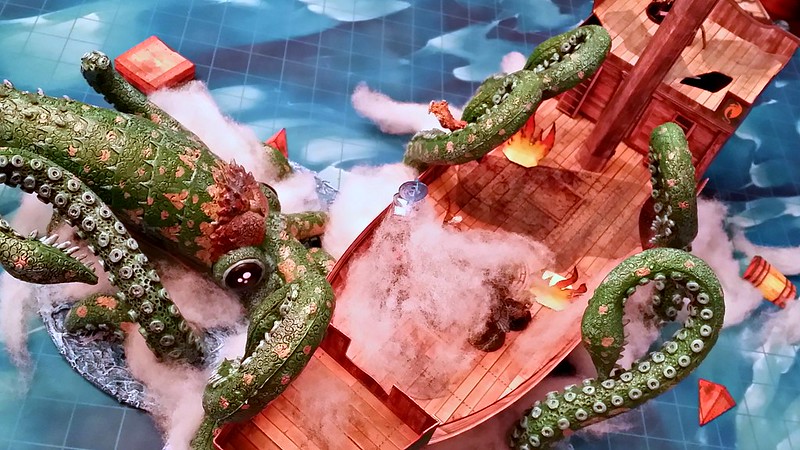 KRAACK! The upper mast is snapped off by a huge tentacle, taking the sail with it… 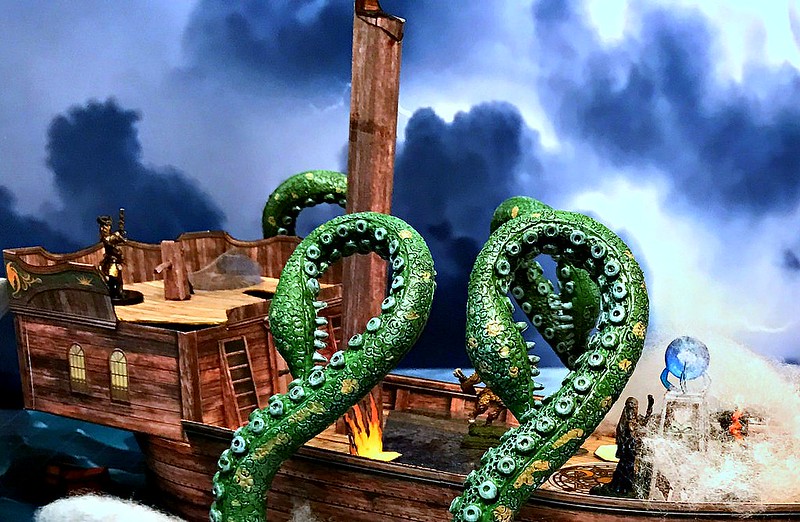 Aquero is cast into the sea – and if full armor he instantly starts to sink – but the veil of water breathing saves him. He removes his armor and swims back toward the ship.

On is way back, Alta , who has been focusing on defending Florynsael, Edryd, and Eachann, is grabbed, crushed, and dragged into the deep – gone forever. 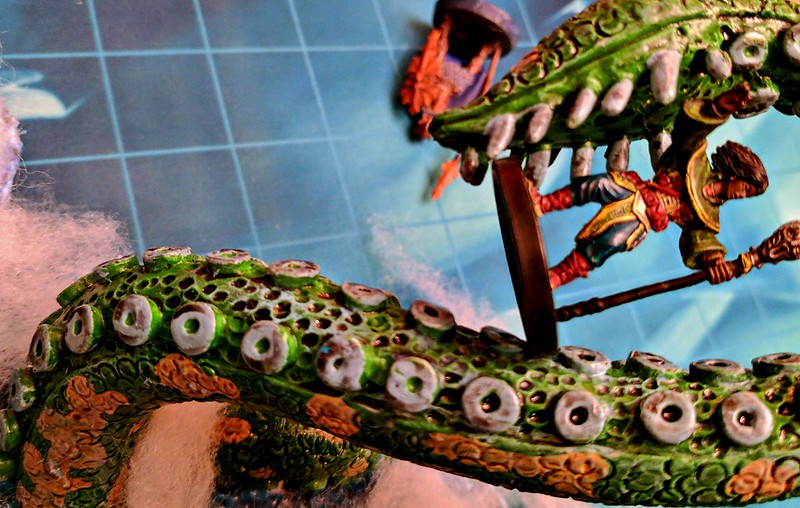 Nostalgio is next to be grabbed – then tossed to the deck, nearly breaking his neck. 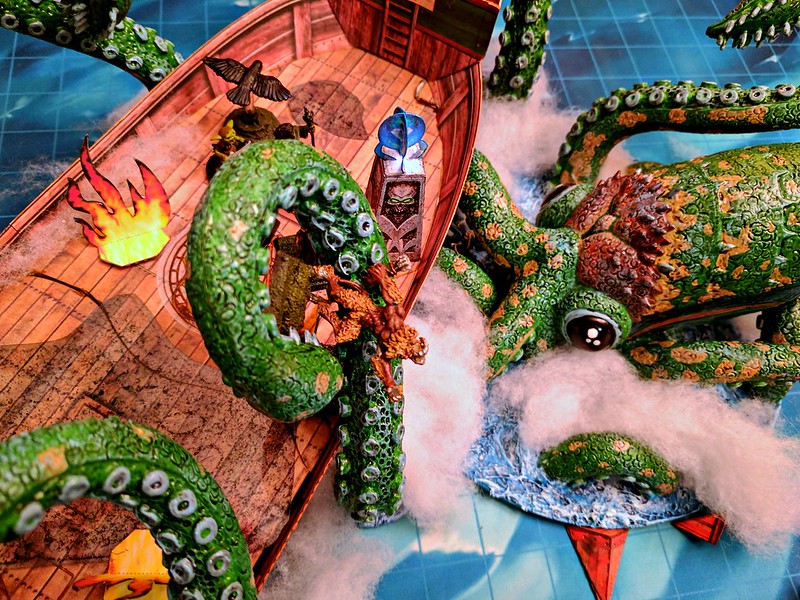 The titan starts to focus on the ship more than the attackers – perhaps in response to a sense of panic as the ritual to deprive it of freedom begins to complete. 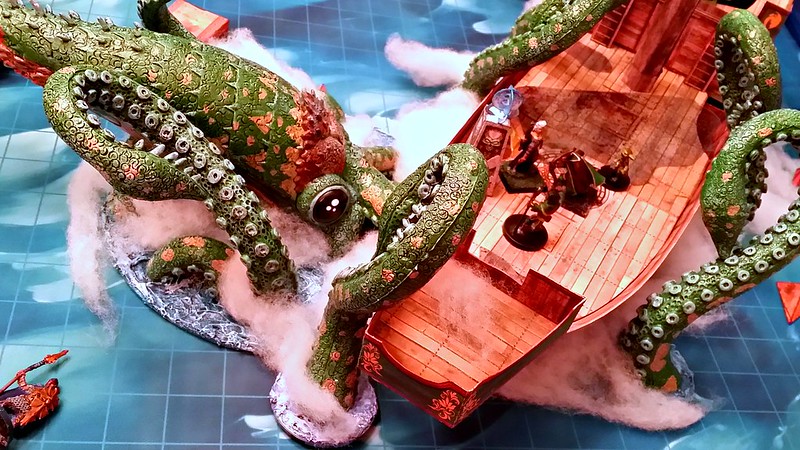 But – it was too late. The ritual reaches it’s hurried conclusion!

The Sea Titan “vanishes” and is now within Eachann. A vessel out of season. 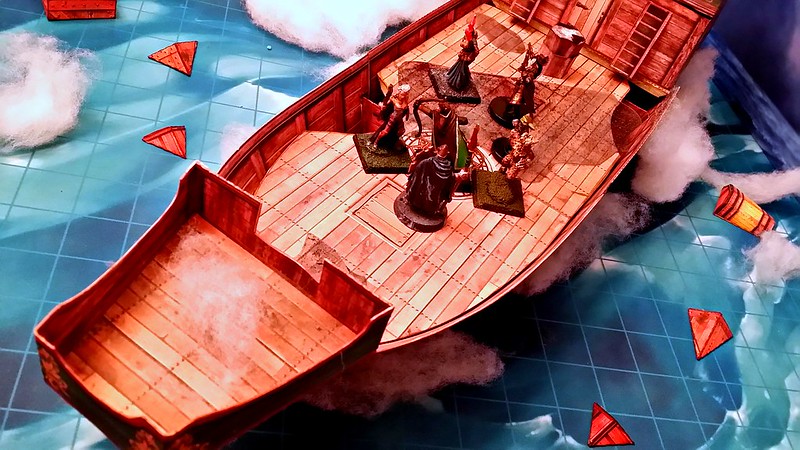 Florynsael, Edryd, and Eachann are all spent – and though they captured the Titan, the ship is sinking! Only Eachann and the captain surivive to use the summoning circle to return to Shiraz and Jan’ka’kar before the Steadfast slips between the waves forever lost.

Team Efreet’s primary mission (to investigate the Hradrum at Vor Rukoth) has failed, and the secodnary objective of capturing to the Sea Titan was accomplished at great cost, including the loss of the Stone Titan: Duggan!

How will the exchange of Duggan for Eachann change the balance – now with three titans on team Aboleth? Also, what will come of him being a non-compatible host?

Find out more, next time with Shute’s Legacy! 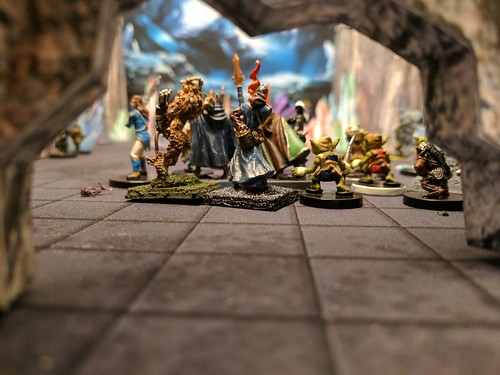 Eachann is a new permanent character in our group: 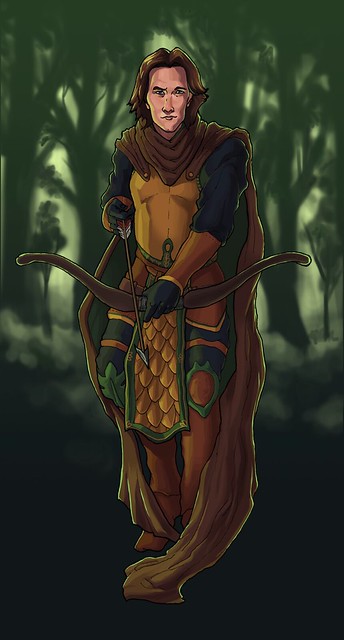 I also ran a battle-royal version of this encounter (without the capture option) at my FLGS, Games of Berkeley. Some of the photos of that encounter are on Facebook

The Kraken pics are amazing. What fun you must all have!