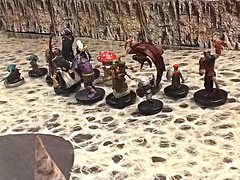 This adventure is NOT part of the Foresite Irregulars storyline, skip to Lost in Sigil to pick up the latest in that chapter.
This is the second post from my run of D&D 5e’s Out of the Abyss at Games of Berkeley.

Having taken the guard post carved into the nearest giant stalactite, and cutting the connecting bridges, our heroes escaped Velkynvelve , with some armor and weapons, but not without the loss of several fellow prisoners. 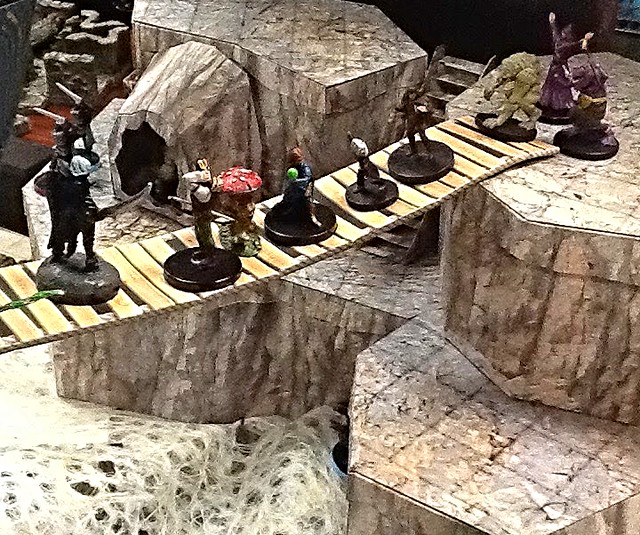 They only had a short lead while their former captors found a way to the canyon floor, so they ran a fast as they could through the narrow passages… dropping caltrops they found in the armory, at choke points all along the way.

They built up enough time to have a short rest, eat what little food and water they looted from the half-dozen drow they’d defeated, and to get armored and armed. 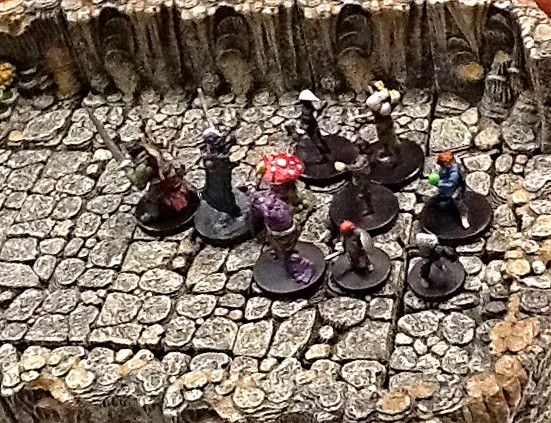 The rest was too short, as Jimjar soon reported that he could hear footfalls behind them. Once again, they run. No time to explore, no time to think.

As they run, Magda notices that there have been no branches to these caves. “That makes no sense”, since she herself was taken to Velkynvelve prison in along this vary route, and they took plenty of turns. Appealing to her deity, she learns that these walls are infused with some sort of illusory magic.

As she reports this to her fellow escapees, they turn a corner to a large opening… 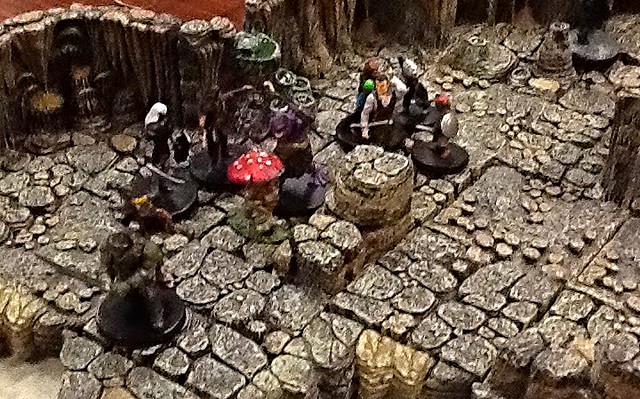 When they reach the far side of the room, they see that they have reached a dead-end! 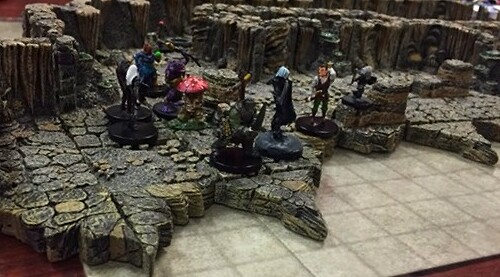 Not just any dead-end, but a giant jutting cliff leading off beyond their visibility outward, downword, or upward!

The only other feature of interest is more of the spider webbing about 30’ down, hugging the cliff walls and attached to craggy spires and stalagmites to the edge of their vision.

Unexpectedly Buppido, the suspicious Derro, steps up on a rock-platform near the edge and whistles out, loudly!

Several move close to the edge, contemplating their options.

Bucephalus starts acting strangely, mumbling about smelling food below and ties a silk rope to the platform and begins climbing down.

Clearly fighting the Ilvarra and her companions is a non-starter. The caltrops slowed them down, but made it very clear where they were headed – and the magic is a clear indicator that they were being herded to this deathtrap.

A few minutes later, two small figures can be seen slipping along the filaments of the spider webs below, to a location directly below this outcropping. Small humanoids… As they get close they call out “Buppido! What’s up?”

“Time for you to repay your debt!” is his reply.

Just then, Jimjar – who was on rear guard duty, comes running up to the edge, puffing “They’re dealing with the last set of caltrops. We’re out of time” – and with that he leaps over the edge down into the spider’s web below.

Quickly the smaller escapees leap over the edge while the others side quickly down the rope, which Kraum – by sheer strength – breaks by tearing it over the overhanging cliff edge above.

They are just hiding under the ledge when Ilvarra arrives, spitting curses about caltrops.
They can just make out: “Here’s the rope they used. It’s cut.” 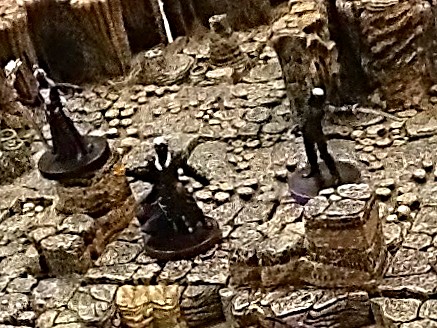 Magda tries something risky and casts Dancing Lights at the edge of her range, deep into the webs – just for a few seconds and then dowses them.

Again they can hear the priestess scream as she shoots three bolts of lighting (from her staff?) ineffectively out at where the lights were.

After waiting a few minutes after there were no more sounds coming from above, Jimjar climbed up to be sure their persuer’s had retreated.

One of the little blue gremlins speaks:

“Ilvarra’s after you? That’s not part of the bargain, Buppido. There’ll be more payment later.”

He continues, addressing the group: “I’m Yukyuk and this is Spiderbait, so where to?”

Afer a brief discussion, they decide to escort Stool to Neverlight Grove, several days travel away. 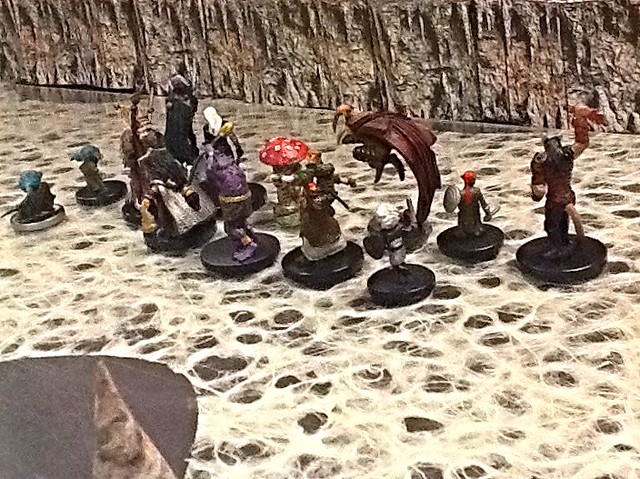 Traveling is awkward and slow, but apparently most direct. They don’t get very far before Spiderbait begins to tremble, sensing something on the strands… “Boss, crawlies! Looks like they got something big!” 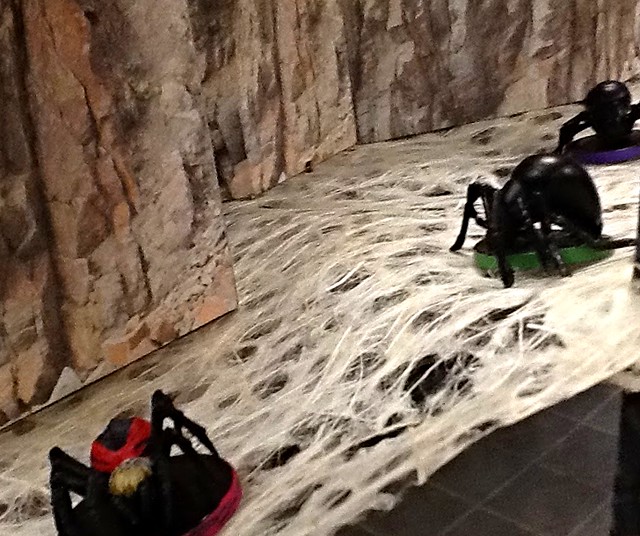 A collection of spiders were wrapping something man-sized up, but the company disturbed them!

As they fight the giant arachnids, bolts of energy flare out from the partially completed cocoon, the Tiefling Warlock inside is still conscious and contributing to his own rescue! Yukyuk and Spiderbait, who aren’t attacking instead move quickly to release him. 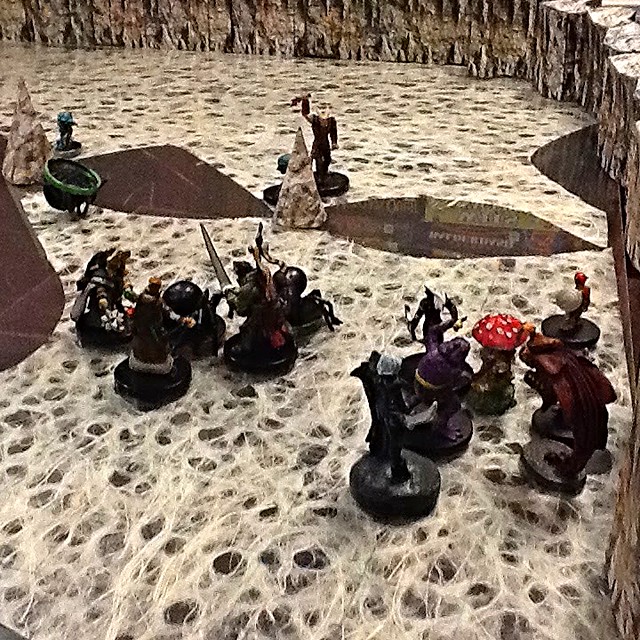 And quickly they finish off the spiders.

Again, there is an earthquake – which is very dangerous on the webs. Several key supporting strands detach as cliff sides and stalagmites fall. Several party members lose their footing and fall, some into large openings in the webbing – but all are saved at the last moment by heroic actions.

The quake has damaged some of the surrounding clifs, opening holes and releasing gushers from underground streams… 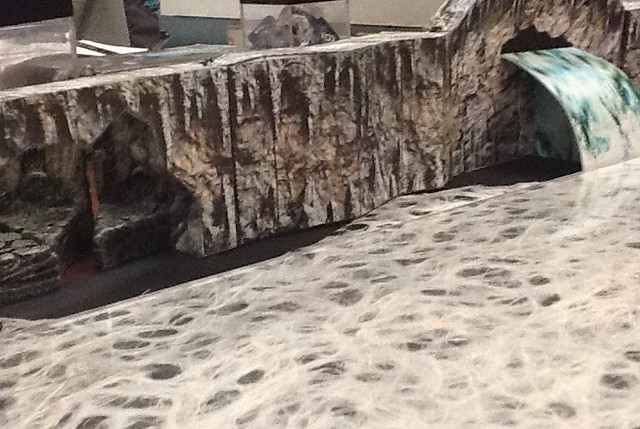 “We need water, lets see if we can find that new waterfall…”

It’s still very slow going, so it takes a long time to travel a relatively short distance. As they approach the falls, the new Tiefling Warlock is attached by an invisible figure, set on tossing him into the depths below. 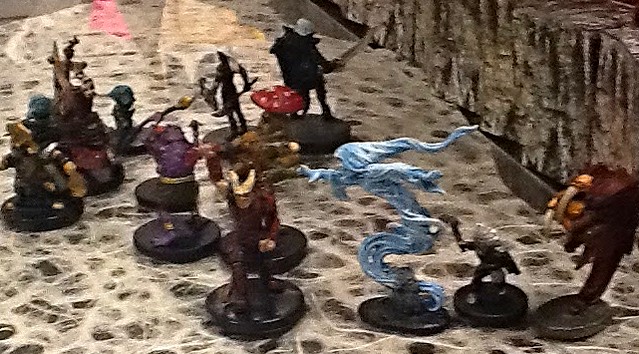 Hitting an invisible opponent is hard, and even when you do, it seems to pass right through. Brother Darvon manages to turn the ghost, which provoked the response “Don’t let this demon into the tomb!” It’s the last thing it said before it was completely banished by the party.

Do we ever get to stop running?

They reach the waterfall and start drinking and filling containers.

Silently, a Drider drops from the ceiling by a long strong cord and grabs Shuushar!

Shuushar wiggles free and drops to the web – fortunately not falling through. 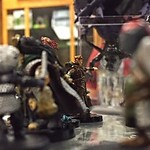 The closest try to strike back, but they can’t get through the Spider-Man’s tough hide.

The Drider withdraws to a safe distance toward the ceiling, where the party can’t see him, and begins to let a rain of arrows fall.

Nearby is a just-created natural cave entrance – Kraum: “We should fight this creature in the cave, where it will lose it’s advantage.”

But there is a gap in the web in front of the cave – so the group splits up, Buppido grabs the end of a rope, and YukYuk and Spiderbite take it out to a nearby stalactite top to secure it, so jumpers can grab it if they slip. 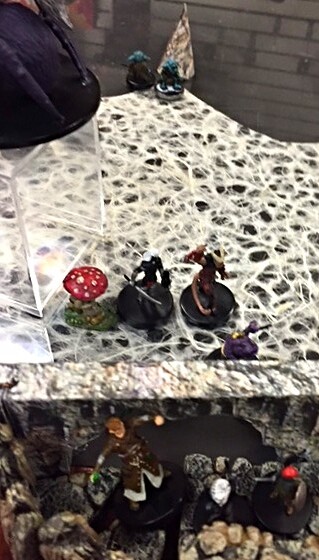 Magda attempts to intimidate the Drider to coming into disengage, and instead treated to a trio of arrow strikes, taking her down. Kraum quickly moves to carry her back to the cave. 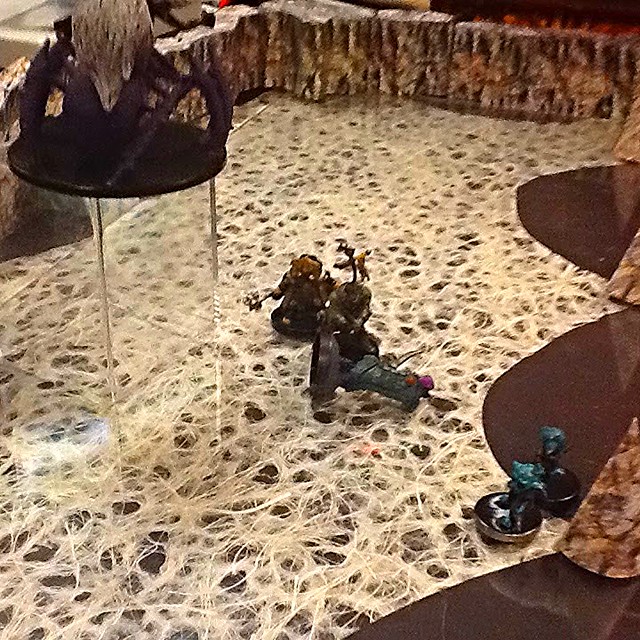 Next Spiderbite is taken down, and as Kraum is taking Magda to the cave mouth-jump, Yukyuk makes a wild (blind) dagger through up above his head, only to be shot dead next.

Most of the rest make it over the gap and into the side of the cliff, except Sarith, who missed the jump and was shot by the Drider while hanging on the rescue line.

Where does the cave lead? What did that poltergeist mean by “Don’t let the demon into the tomb!”?

Find out in the next chapter: The Lost Tomb of Khaem

Join us text time for The Lost Tomb of Khaem 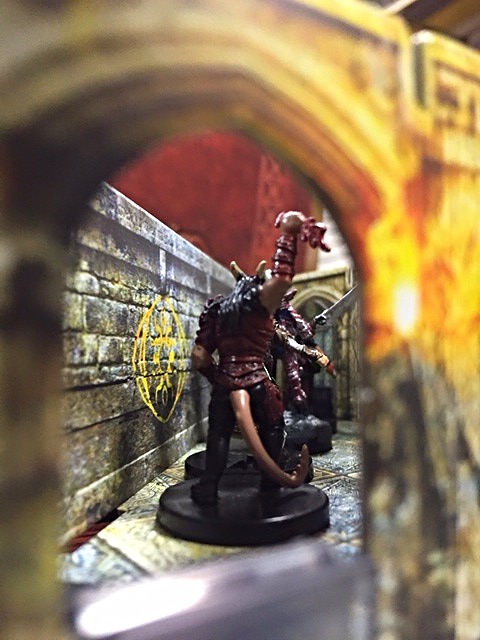