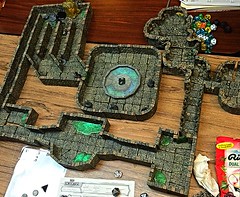 The following post contains detailed SPOILERS for The Oozing Temple an encounter area from the Out of the Abyss a part of the Rage of Demons campaign setting by Wizards of the Coast. I ran this session at Games of Berkeley as part of the official Adventures League program.

Weeks ago, the members of our unlikely band had been kidnapped from the surface world, and were pressed into service in Drow slave pits. After escaping their captors once, then recapture, they were pressed into service to make a delivery to the surface, but were sent without a guide. They’ve been wandering aimlessly for weeks, low on food, and fighting the environment and bizarre creatures and demons at every turn the eventually stumble into a ancient seemingly abandoned underground temple.

Having previously encountered signs of an obvious cave-in, no one was completely surprised that there was a sizable earthquake! This permanently split the party – perhaps killing those on the far side as the walls fractured apart. [This is how we said goodbye to some folks that weren’t coming back to our game…] 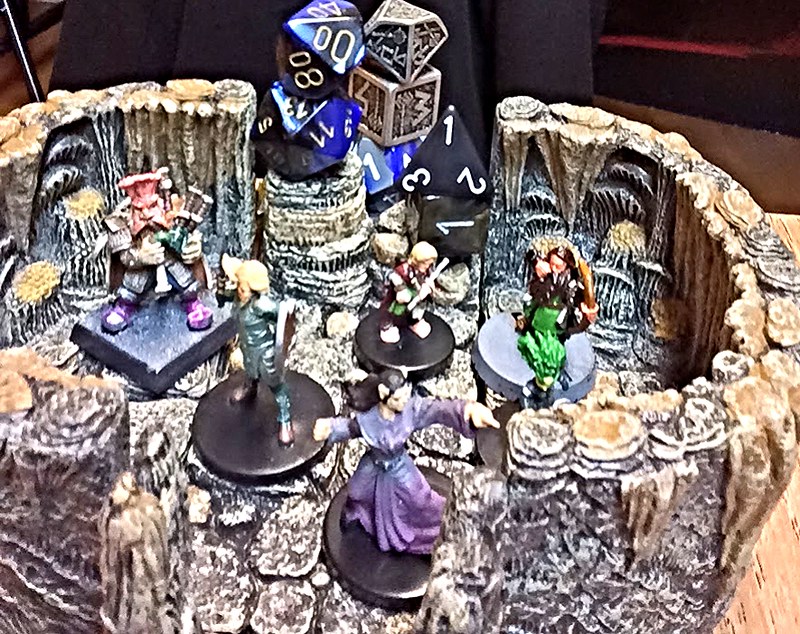 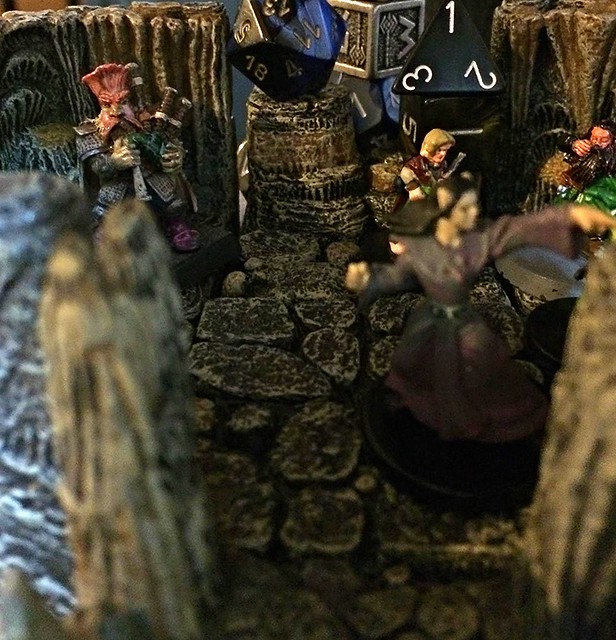 Immediately it became clear that the damage is the result of one of the many nearby underground rivers that run throughout the Underdark and that water is now leaking into the temple through new cracks in the walls. 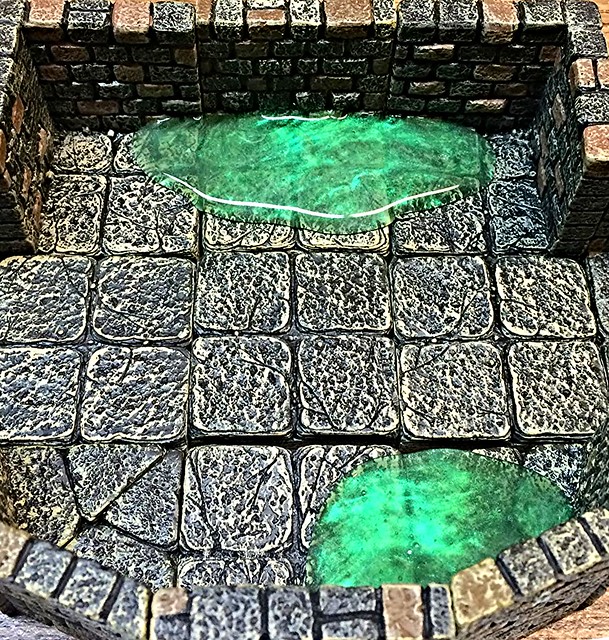 They decided to check out the natural chamber that would be “behind” them first. The Ranger notices that the “water just moved sideways for a moment in there…”

So the monk moves in, in full defensive posture.. 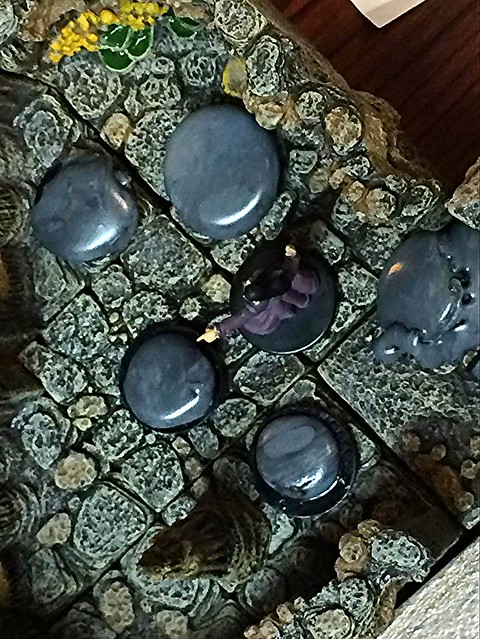 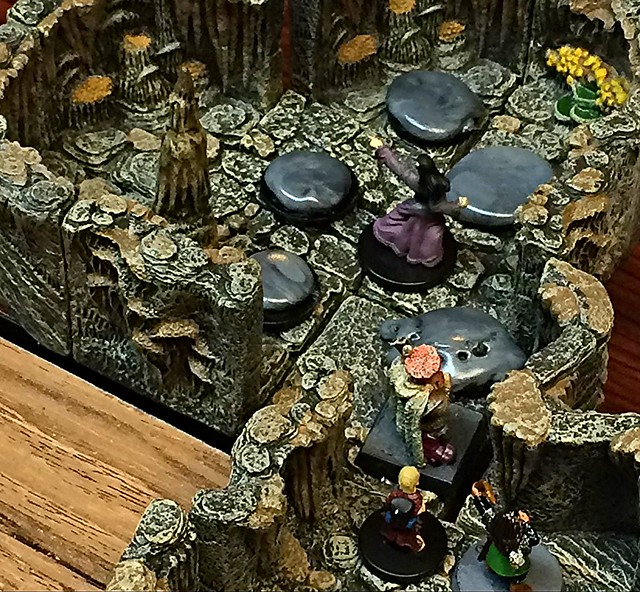 Though the group succeeds in destroying them – but not without some metal armor an weapons partially eroding. Also the druid notes: “Those oozes coordinated their attacks. When they realized that they couldn’t hit the monk, they shifted targets. Something’s very wrong here…” 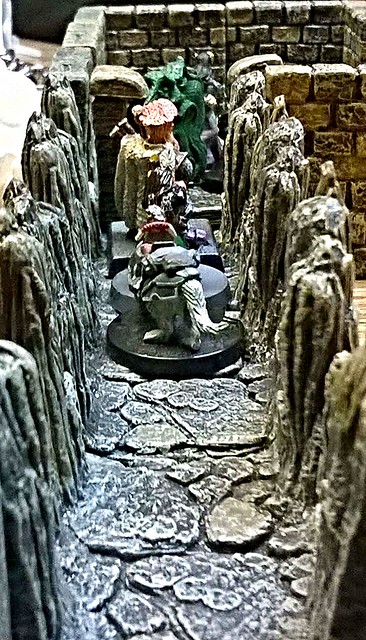 Content that the chamber is clear, they head back through the natural corridor to face a door to a stone-walled (constructed room.) The monk is cautious opening the door, then closing it again quickly.

“What? Oh!” – The sound (almost of a child?) started by the door closing in turn startled the monk. “What?” she said, and the party behind her said “What? What?” as the hadn’t heard anything but the monk acting startled. “Nothing” said the monk, realizing she only heard the voice in her head. 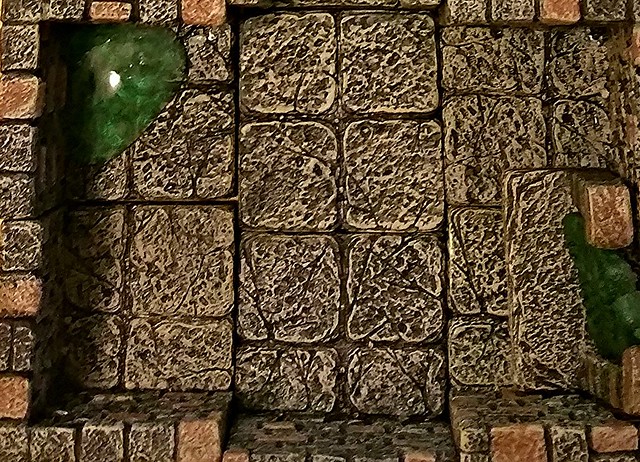 Opening the door again and shining light into the room reveals more new cracks and water seeping into the room faster than it is exiting, accumulating pools.

“Wait! Let’s see!” the voice says to only the monk.

The archer says “Five more oozes that I can see on the ceiling, but they aren’t moving!”

“Are you here to help?” pleads the disembodied voice.

“Yes!” says the monk, with the party saying “This is getting strange, you talking all by yourself…” 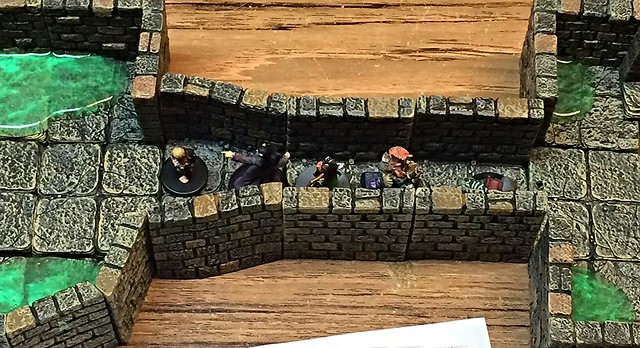 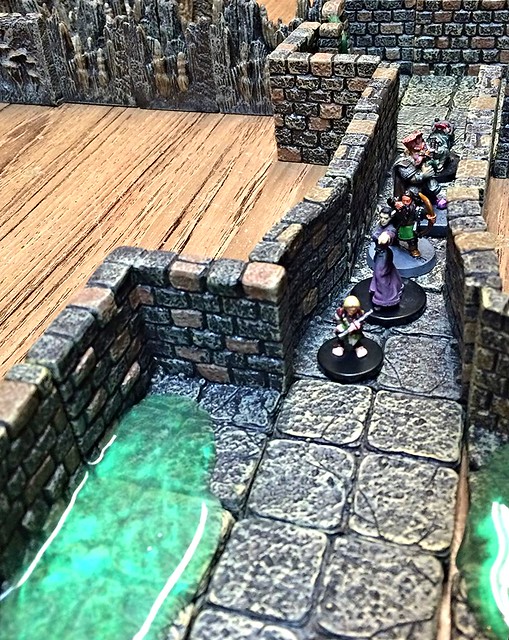 The next chamber has even more water gathering near the walls…

All of the sudden, everyone can hear the voice: “Stop there!” – and a large mass drops directly down in front of them… 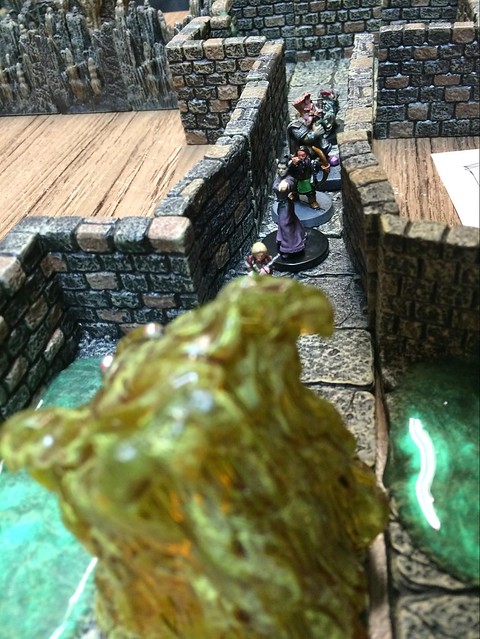 The cleric screams and runs to the back as he recognizes a foe-type that recently nearly killed him in a single “blow.”

“What? It’s a gelatinous cube – but it’s using telepathy, and it has two floating eyes ? Is that glowing light inside it’s soul?” again, the druid is baffled.

“I am Glabbagool. He who woke me wants us to help with the great battle that is coming, but we need to get out. Can we go the way you came?”

“No – totally collapsed…” says the Dwarven Bard. “…we’ll all need another way.”

[Much discussion of plot points omitted here as spoilers, enough said is that Glabbagool wants to lead the oozes to help some great battle between demons happening at some other town-sized demon days away from here… And that the party might be able to help, or die.]

“Do we have a choice?” asks the Bard.

At that point the grey oozes in the last room (behind them) move up behind the party, on the floor, walls, and ceiling. 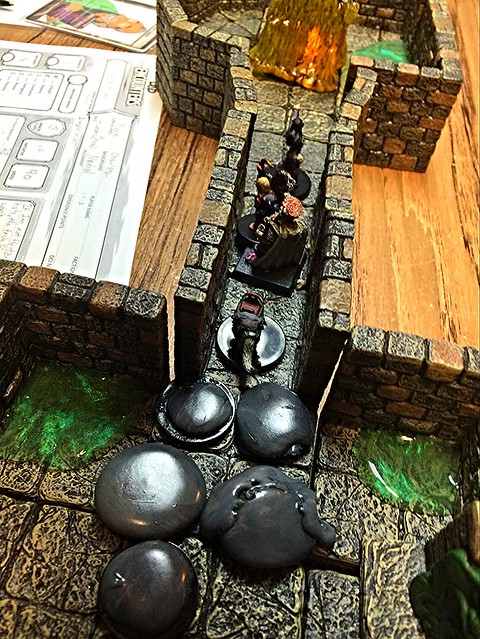 “A test! First a test of leadership!” blabbers the green cube. 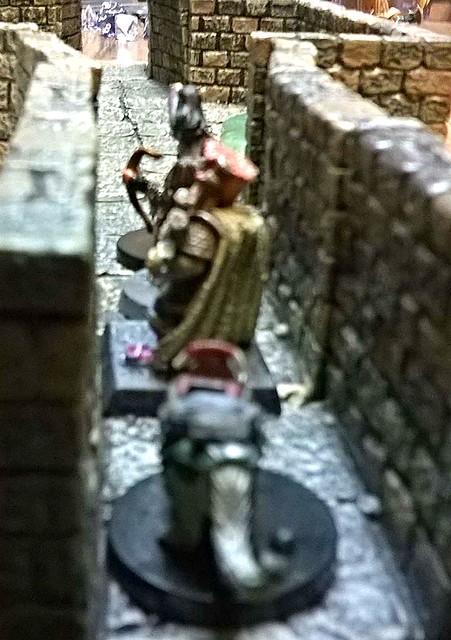 So Glabbagool leads the group down a long hallway, with the oozes bringing up the rear.

“When we escape here, were will join the [SPOILER] and prevent the abomination! Food for all!” (The group realizes that this is not for their benefit.) 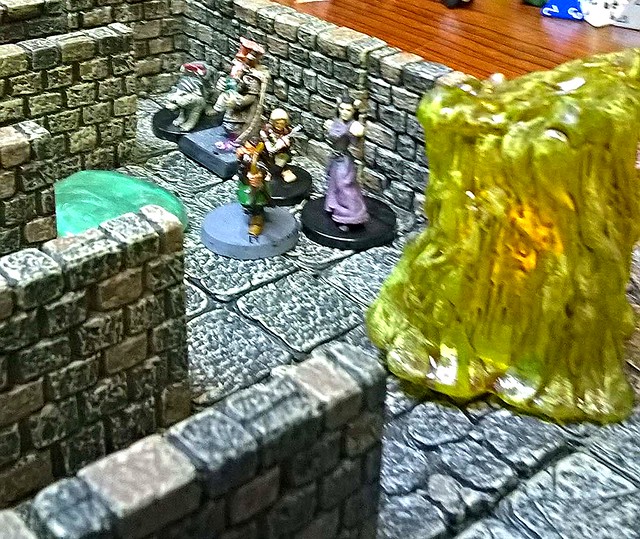 Rounding the corner, the talking, seeing, glowing cube blocks the way into a rough cavern: “We’re not ready to leave yet. Leadership test first.” 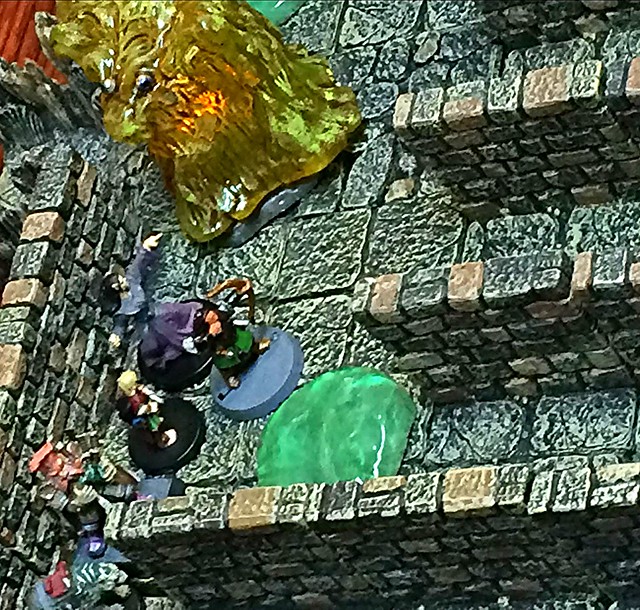 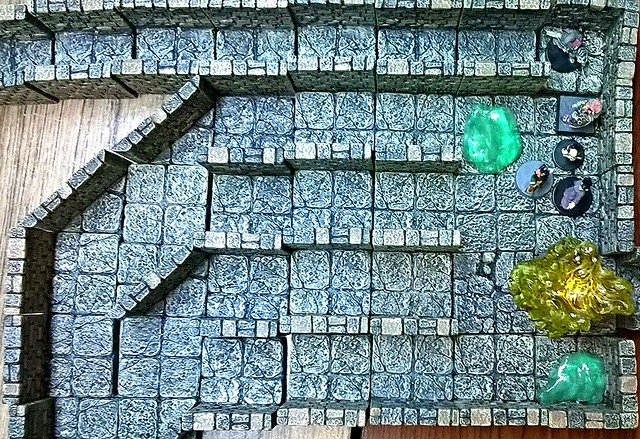 As they choose the farthest one, Glabbagool’s eyes follow the Monk without moving it’s body the eyes pass through it’s interior instead. “Gross” says the elf.

With clever halfling-tossing and leaping about they trigger a pit trap with no harm to themselves… At the bottom a Black pudding! 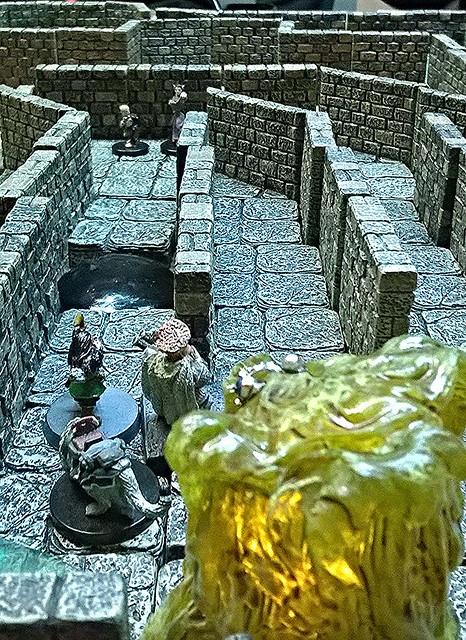 After some fighting, healing, and more damage to weapons and armor, the pudding is defeated before it can escape to release another pudding.

“That was one of one,two,three,four!” send Glabbagool. “We will see how many…”

The party moves up a corridor and sets up an ambush at the next false floor. The black pudding never had a chance. Again it tried to escape to get allies, and again it was prevented. The archer is running low on arrows, and the monk is all but out of darts.

But the last Puddings don’t wait.. they exit their lairs immediately. 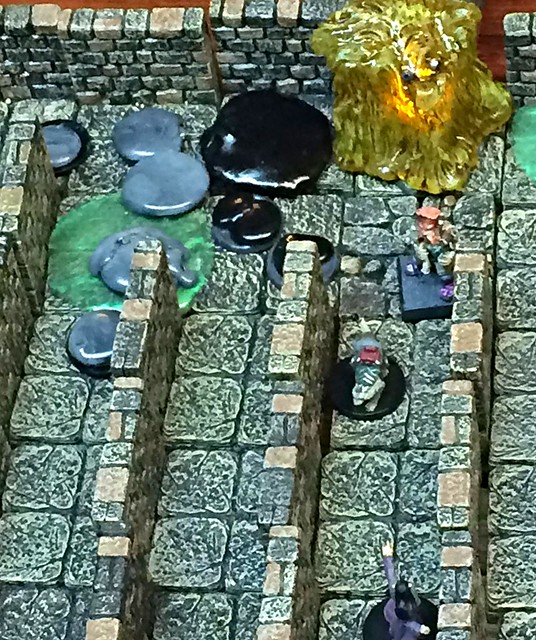 The party panics, and is shocked to hear “They accept Glabbagool’s leadership!”

“Can we go now? The water is still rising!”

“No, you need what is in the other room. Leadership requires it too.” 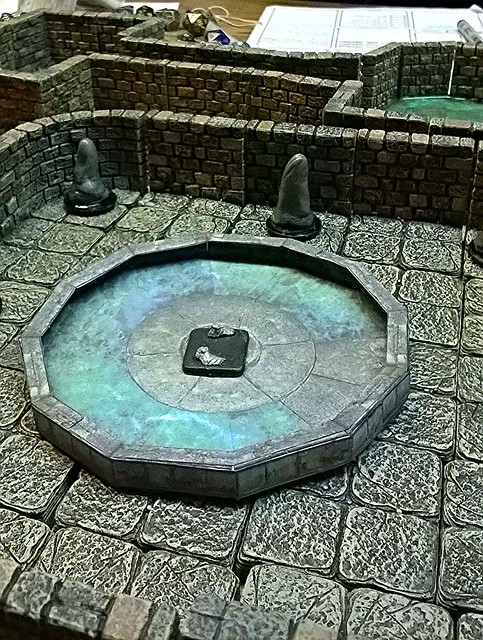 The fountain room contains the feet of a broken statue in the fountain area, and shapeless statues in four of sevent niches in the surrounding walls.

“The fountain is for you, the others for the leader.”

They quickly discover that the shapeless statues are more Grey Oozes that are freed when touched by any natural being and that the fountain contains gear/loot. The Goozes join the slimy war party as they all enter the final natural chamber…

The chamber is filling with water rapidly. “The river is against this wall. We can float up and out when you are ready.” – With that Glabbagool and the puddings jam themselves into the largest crack and expand themselves to break away a large section of wall/ceiling – and water pours in flooding the dungeon.

Humanoids, Puddings, Ooozes, and an odd Gelatinous Cube float to the surface… 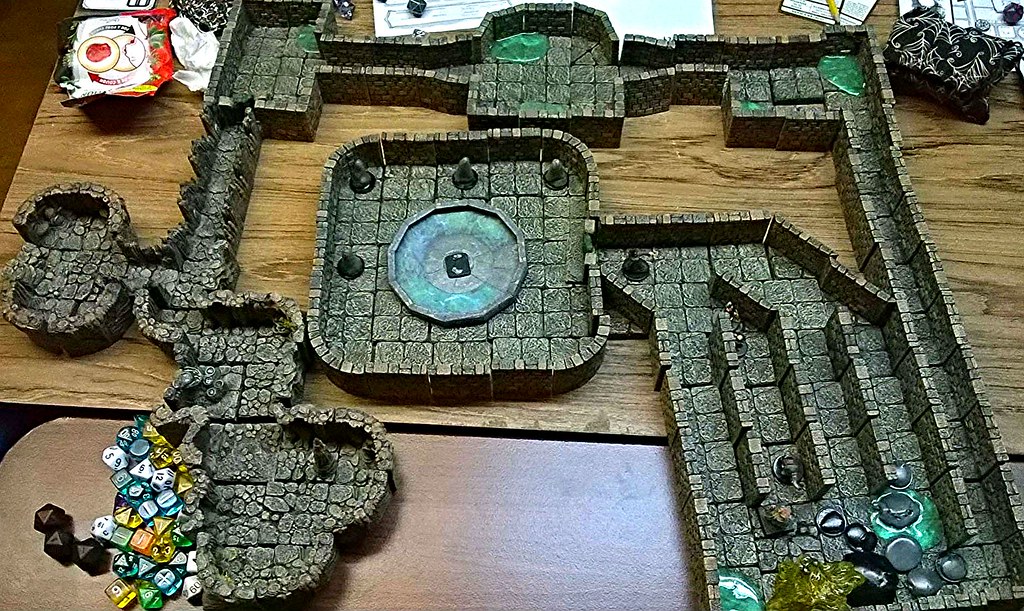 If you are interested in seeing more papercraft terrain in action, start at oldschooldm.com If you want to learn about building paper terrain, props and minis, please checkout out (and join) the community I hang with Cardboard Warriors I also post notices at @oldschooldm