It has been more than a year since my group last met, so the story thus far may be hazy for you, good visitor, click here for a short summary and list of entry points. 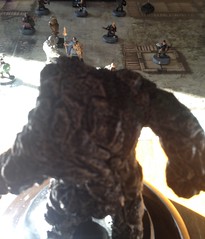 Our heroes interrupted The Sundering of the FeyWild at the very last moment by Shute releasing the Rainbow Phoenix and Edryd (surprise!) releasing the Fire Titan. This left the mirror planes all but separated with Gardmore Abbey’s Font of Ioun being the only known remaining passageway. Most of elves in the area took the passage along with the members of House Velfarren, responsible for the Sundering.

Party patron, Charles Forsite, was disappointed to learn that the party had kept the presence of a Titan secret from him – unknowingly causing them to contribute to the calamity. Now he knows that keeping his identity secret lead to mistrust, so he calls for a meeting at their headquarters in Punjar while Sir Oakley and Lord Padraig stay behind to guard the last gate to the Feywild. 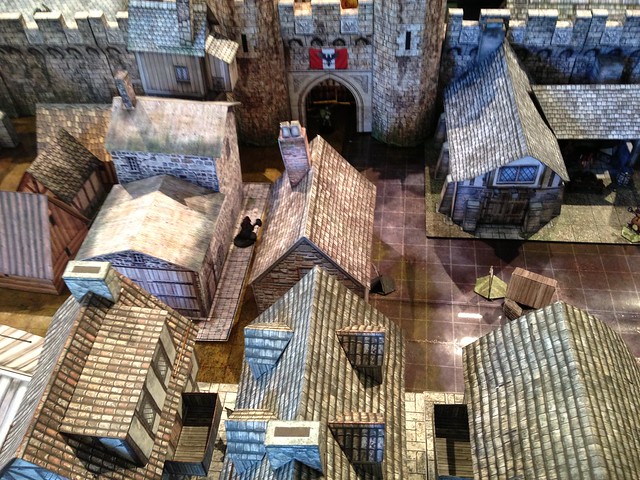 Delphina has decided to stay with Aquero and his Dire Wolf, Amber, and joins the party as the return to Winterhaven to regroup. It is already clear that there are environmental effects and unseasonable hail falls on their trip back.

After a night of rest and recuperation, the spend the next day packing in earnest and delivering and collecting on various minor quests. They plan to retrace their steps back through the Stonefang Pass and meet the Slicing Breeze at Timbervale. They’re ready just before sunset, so decide to eat their final evening meal at the inn, and depart before dawn.

Then there is a horrible boom – for a moment, mistaken as a thunderclap. But then there’s another. Dashing outside they can see magic fire off in the distance back toward the mountains – Aquero speaks first “That’s very close to Asherton Asylum! I’m going now!” The party quickly mounts horses brought from the stable and charge off on an unexpectedly early departure for home. Some members of the Winterhaven Guard join the investigation.

As they ride closer, the booms get louder, and more regular. It sounds like giant footfalls leaving earthquakes. They’ve felt these before and have no problem identifying them — “Stonefang! He must have escaped his prison because of The Sundering. I think the world just got a lot more dangerous” speculates Edryd.

But soon thereafter, Stonefang’s footfalls get weaker and weaker, as if he’s running directly away from the group. By the time they reach what is left of Asherton, they fade away completely. 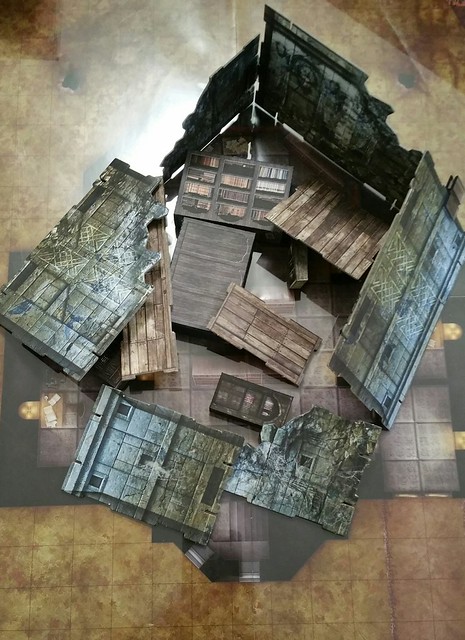 The asylum is in ruins. Huge puddles show Stonefang’s footprints, but they are much larger than when they last encountered this Titan.

The front wall and roof are completely collapsed inward, as are most of the side walls. The rain is pouring over most of the books and the bodies of the Sisters and the patients are everywhere. The anti-magic floor is broken up in several places seems to be malfunctioning.

Then an craggy old voice cries out “There you are Leopold! Good Kitty! Good Kitty! … scaring the mean monster away!” 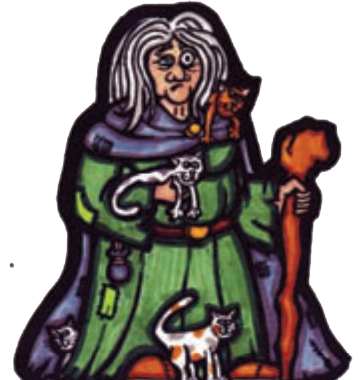 Then a more familiar male voice, sobbing: “Nostalgio? Florynsael? By heavens, Hades rains down upon us all!” It’s Shiraz – sitting on the floor surrounded by rubble – he has Sister Mary-Margret’s dead body lying dead across his lap. This enrages Aquero for he had been rather taken by Mary-Margret when the spent the night together all those weeks ago… “What did you do, Shiraz?”

The cat lady pipes up – “He didn’t do anything! It was my cats! While he tried to save Sister MM, we drove the rock giant away – my cats and me! Rockman was all SMASH SMASH SMASH and I was all ‘Come on kitties’ – then he stopped. My kitties climbed on him while Rocky looked straight at me and did nothing for a long time. I says ‘You are a BAD man – you hurt all these people! Leave now or I’ll have my kitties kill you! So, he pushes the kitties off him and runs away!”

Nostalgio – “Shiraz? Is this true?” “Aye, embellished, but verity m’lord. Mine eyes avouch her tellings.”

“M’Lady Florynsael – Save the Library! Tomes are nigh that are privy to gin a Titan, such as Shute!”

As quickly as possible, efforts are made to shore up a wall as a watershed to protect as many fallen books as possible. While Florynsael studies the tomes that Shiraz guides her to, Nostalgio speaks to the Winterhaven guard – “Please escort the woman…” “AND MY CATS!” “… and her cats back to Winterhaven, and let Padraig know that we are off to deal with Stonefang and then home. Please leave one extra horse for our friend here.”

“Whence healing, at my urging the sisters taught a song of Children privy to Titans…” (clears throat)

Say their names and catch their toe, and we’ll all sing once again!

This entire time, Aquero is focused on burying the sisters, with special focus and gentleness for Sister Mary-Margret. This does not go unnoticed by Delphina, who shows signs of jealousy typical for a first-time love.

“Rhaich! (an Elvish Curse) This book only teaches a means to turn a sentient being into a “vessel” – and it usually fails! There’s a “compatibility” factor – they call it “kind-for-kind”. If you don’t have the right match, the host dies a horrible death. As for Stonefang, it seems obvious the “kind” we’ll need – a dwarf."

Nostalgio – “Then I suggest we ride off now then – bring any books you need with you. We’ve got a Titan to capture and it has a three hour head start!”

A New Prison for Stonefang?

The ride into the mountain was quiet as Shute and Edryd contemplate exactly what sacrifice they’d be asking a member of the Shadowed Chain Clan to do. The very best result would mean ruining any chance of a “normal” life forever. The worst? A painful end, knowing that their death was meaningless, and that your allies’ would join you instantly thereafter. 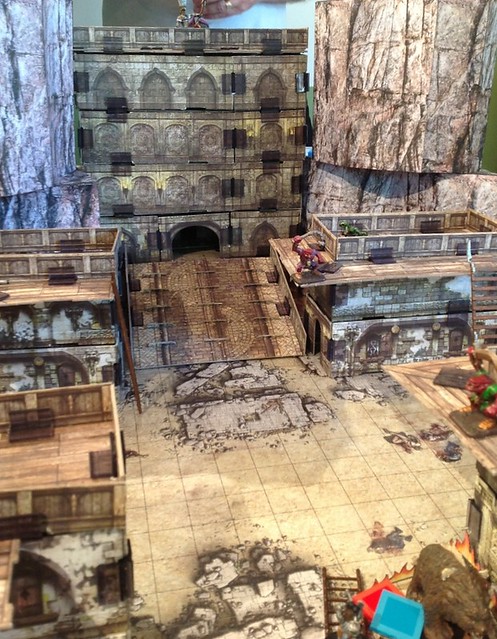 By early morning, they approach the Citadel – where Shute first discovered that she held the Rainbow Phoenix and lost her innocence forever.

Grim greetings are exchanged. The dwarves have been preparing to fight the Titan, knowing that it is now more powerful than ever, and the price they’d already paid in their last encounter. A direct confrontation is certain destruction for the citidel, closure of the pass, and death of the dwarves here. The capture plan is embraced by Duggan (rescued by our groups months ago…)

So the plan is to slow the Titan down long enough to complete the ritual – almost 10 minutes! 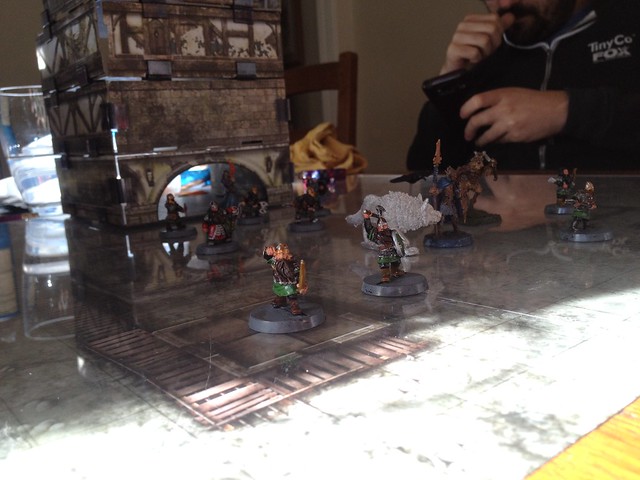 Fortunately there is a large chasm between Stonefang and the Citidel 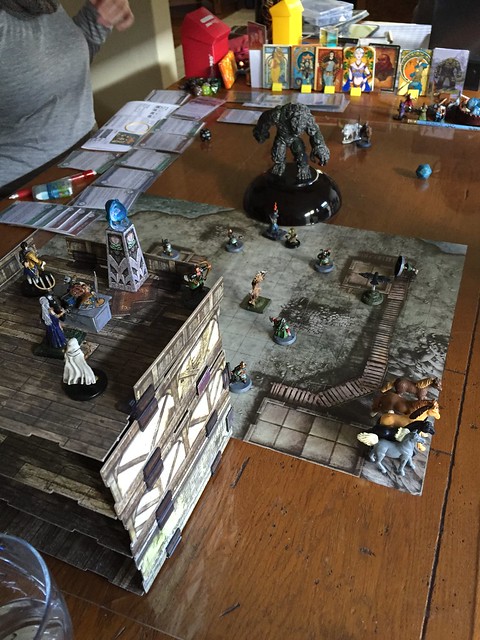 The ritual begins! Shiraz acts as play-by-play for the ritual team, so they can anticpate any effect from attacks. 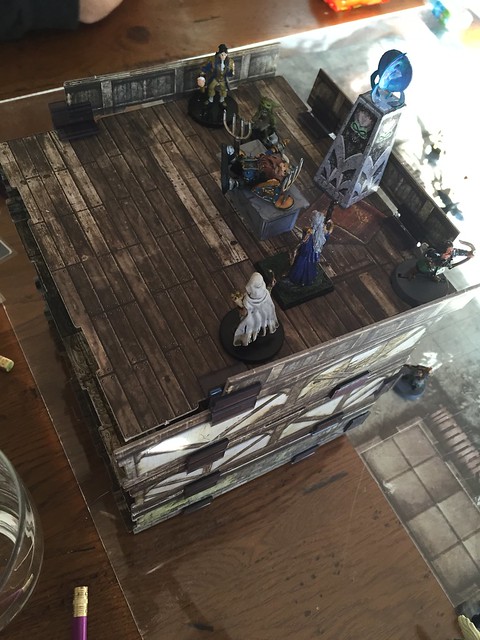 Direct physical attacks are doing very little dammage, Many dwarves are smasshed to paste in response.

Aguero climbs the Titan to try to find a weak spot. 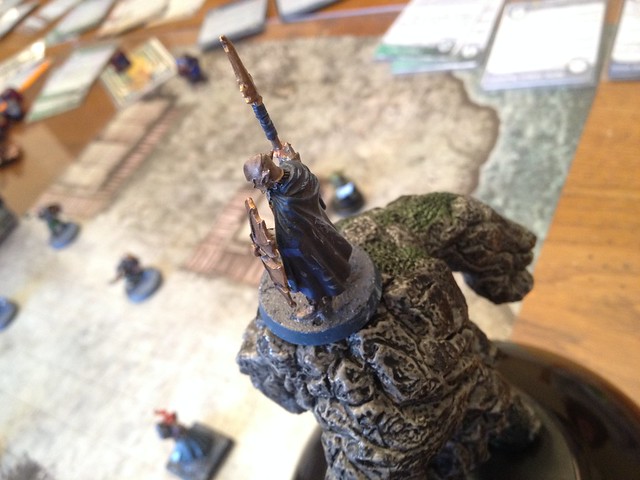 Shute creates traps to slow down and trip the giant. The most successful is to open her Portable Hole immediately in its path! 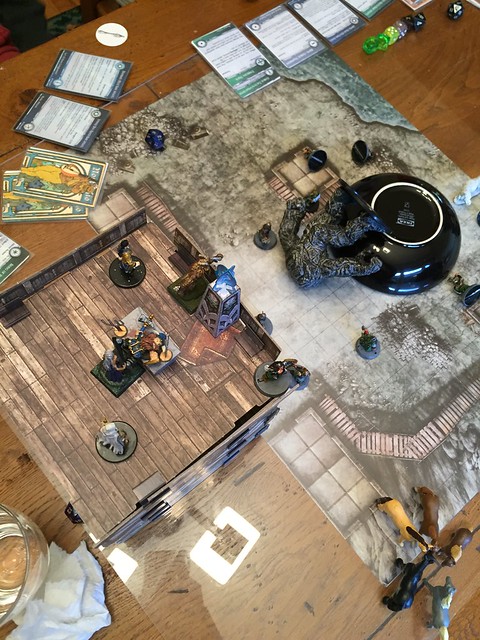 Even though rocks are thrown at the citdel, it manages to remain up just long enough to compelte the ritual. Stonefang is now inside Duggan of the Shadowed Chain.

Will the envessling take? Will it be worth it? Only one defender remains – what will happen to the Citidel?

Find out when our adventure continues to find out who is Dead in the Eye! 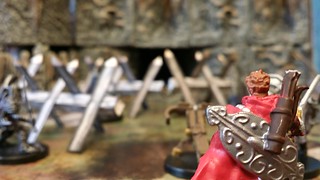 All areas of this encounter were featured previously as our heroes retrace their steps back to Punjar:
Winterhaven
Asherton
The Citidel

Power Cards for The Deck of Many Things