How many demons is it now? 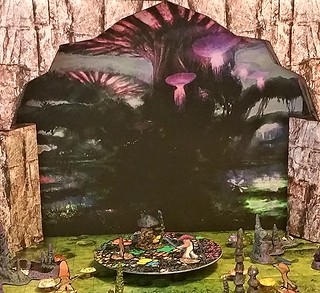 This adventure is NOT part of the Foresite Irregulars storyline, skip to Lost in Sigil to pick up the latest in that chapter.
This is the fifth post from my run of D&D 5e’s Out of the Abyss at Games of Berkeley.

After defeating their captors once and for all, the plan to re-equip at Blingdenstone was successful, but revealed that several great demons have returned and are already wreaking havoc on the inhabitants of the Underdark, destroying a Kou-toa city and threatening (through minions) Blingdenstone – a deep gnome colony attempting to be restored 100 years after a great battle with the Drow devastated the city. 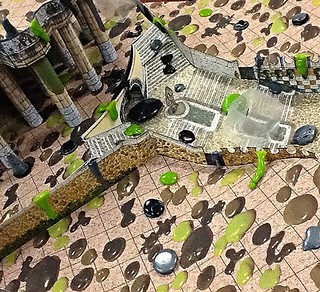 The heroes discovered that the colony is overrun by oozes of all shapes, colors, and sizes, lead by a Svirfneblin calling himself the Pudding King. Some of the group left with escorts to seek others to help, but the core group has resumed their trek to the Neverlight Grove – where they hope to gather a large quantity of ingredients to create Oil of Acid resistance, so they can push through the 100s of minions of the Pudding King in an attempt to cleanse Blingdenstone.

The gnomes supplied a cart, several empty casks and jars to collect the ingredients as well as a cart, horse, and two escorts for the journey. 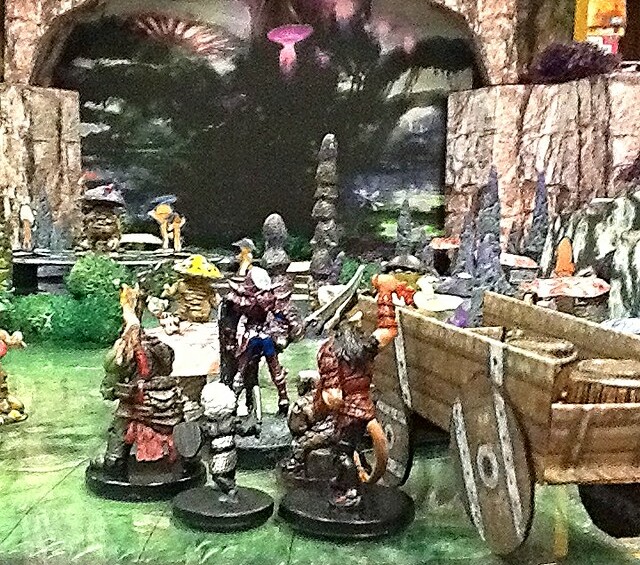 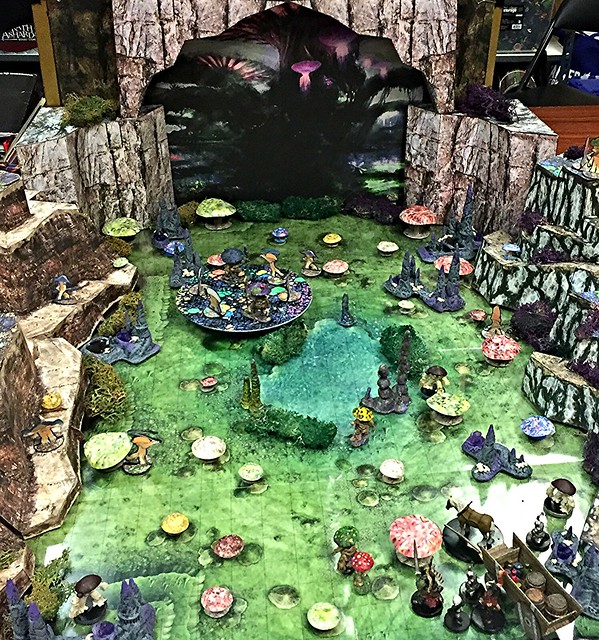 … strangely silent as the “people” here all communicate the same way Stool does – via spores.

The cart is sinking in the soft ground, so the gnome-escorts volunteer to work on getting it out and ready to leave at a moment’s notice.

Quickly, a green-capped Myconid approaches Stool and they come over near the cart together. 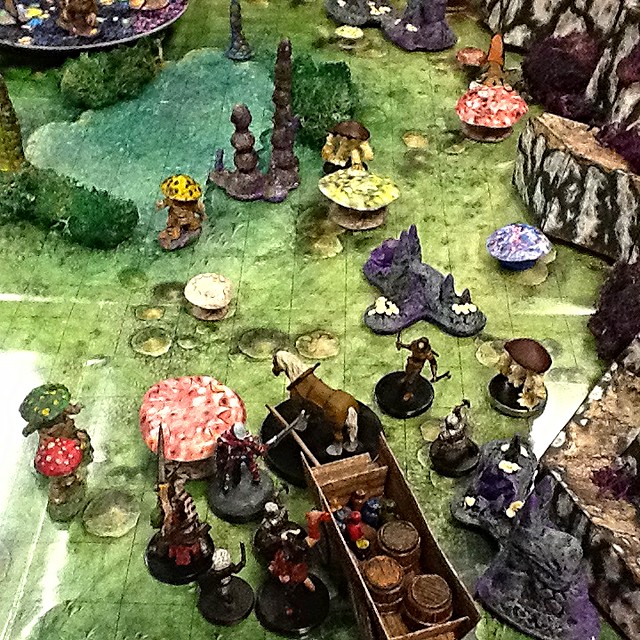 Chant and Kraum are wary, and opt-out of the rapport spores.

Darvon shares: “Stool’s friend is Rumpadump.They are happy to see him again and are grateful.”

Chant: “Time is of the essence – we should attempt to collect the ingredients as quickly as possible.”

Harvesting from the Fungal Gardens

Looking around they see many Myconids gathered in circles wherever there is a high-place. 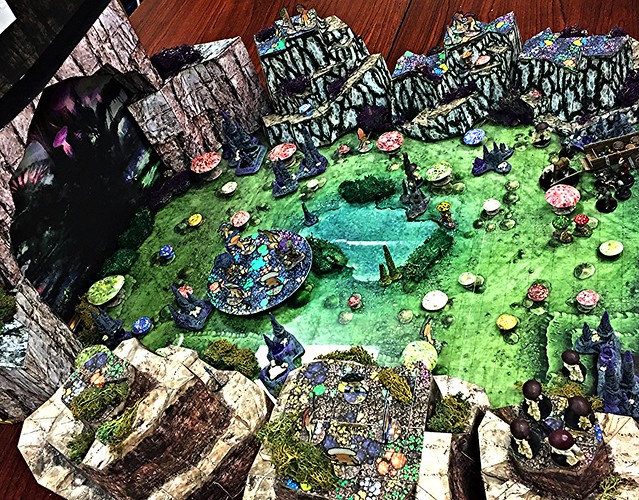 The air is thick with spores – each circle has a clear connection within, and to adjacent circles: forming a spore-network. 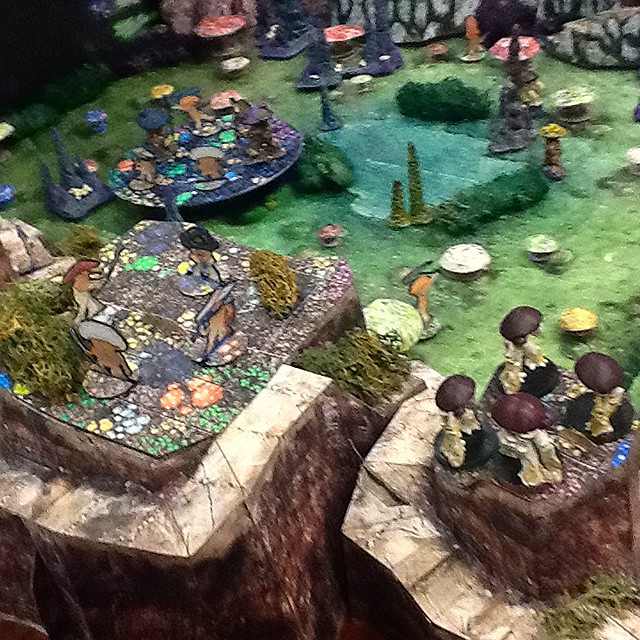 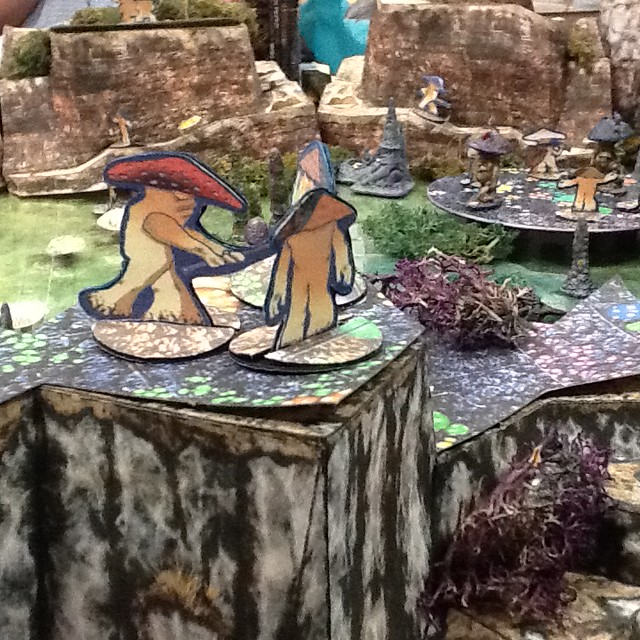 Magda: “We need some jars of each of the three primary lichen types, ochre, violet, and green. We also need full casks of liquid from the central lake and the easternmost pool. And some boards of zurkwood” It seems the Northern terraces are covered with Ochre Lichen, and the nearby southern terraces contain violet.

Stool will lead Bucephalus, Darvon and myself up here near the cart, and we’ll get some violet." 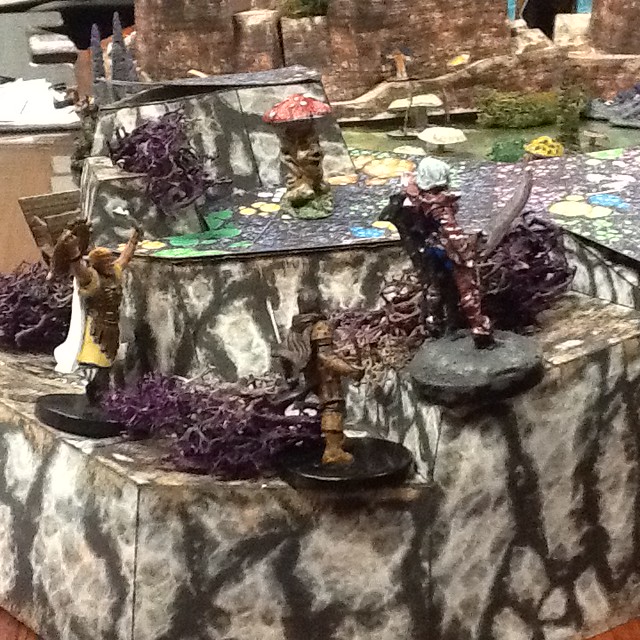 Kraum:“I will guard the cart.”

Chant: “Buppido and I will cross the grove and try to collect some ochre fungi. Perhaps we can recruit a mushroom-guy to help us.” 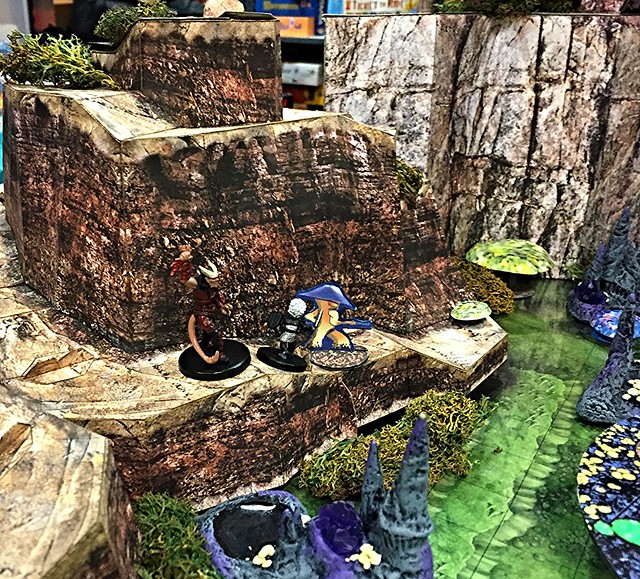 .. a tricky task, as Chant continues to refuse the rapport spores, but through some hand-signals and nods, they recruit an assistant and make it to the top to begin their collection. 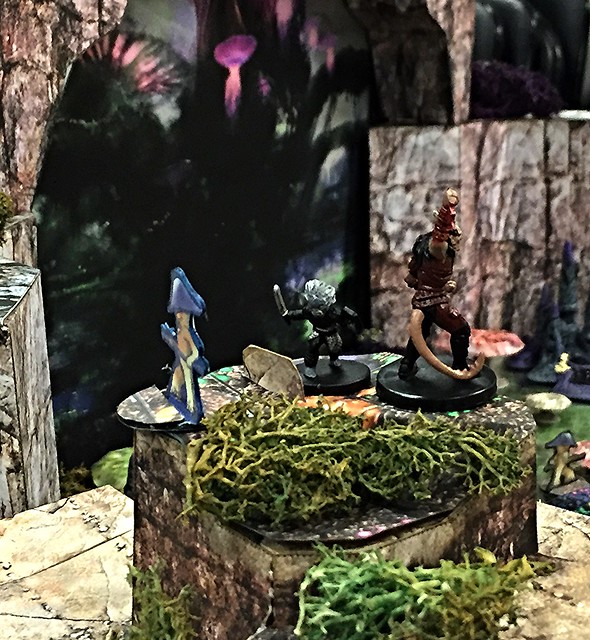 “ROAR!” – team violet is surprised as a Shambling Mound climbs out of the overgrowth! 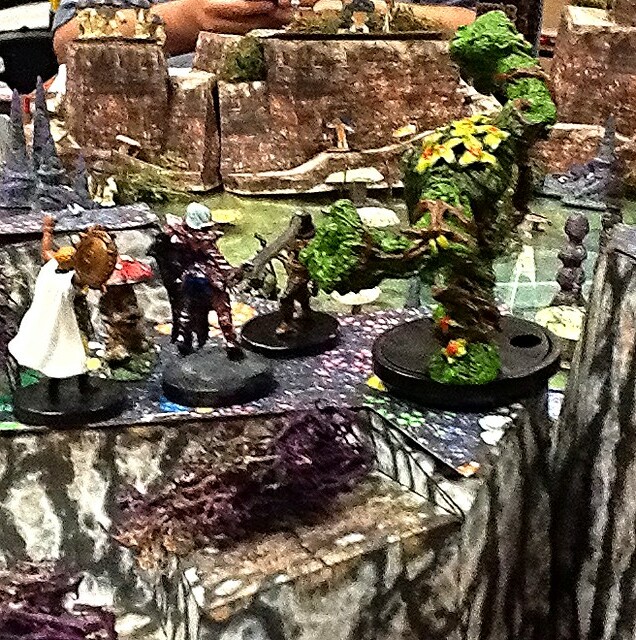 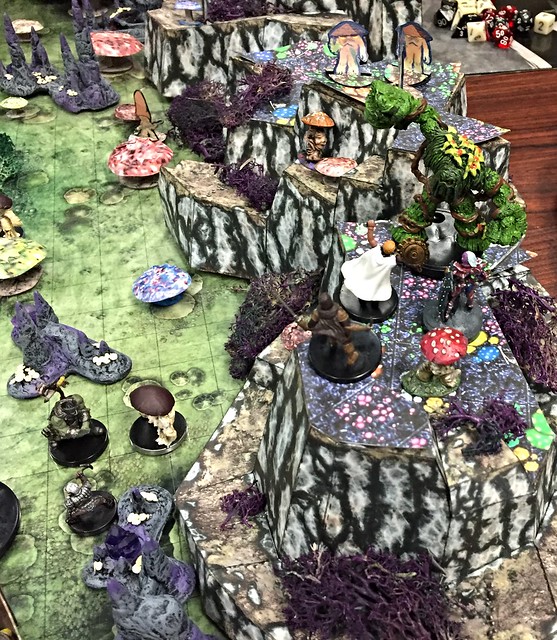 Chant and Buppido abandon their collection prematurely in order to try to assist their compatriots – but they are too far away.

Kraum rushes up the hillside just in time to give the death blow.

The defeated shambler falls down the cliff… 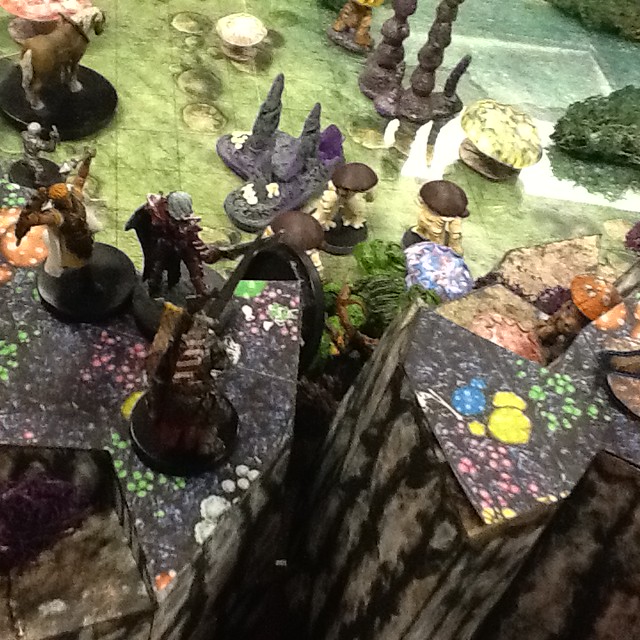 … and, quickly and silently, a number of locals move in to disassemble the carcass, and carry the remains to the far-end cave exit area. 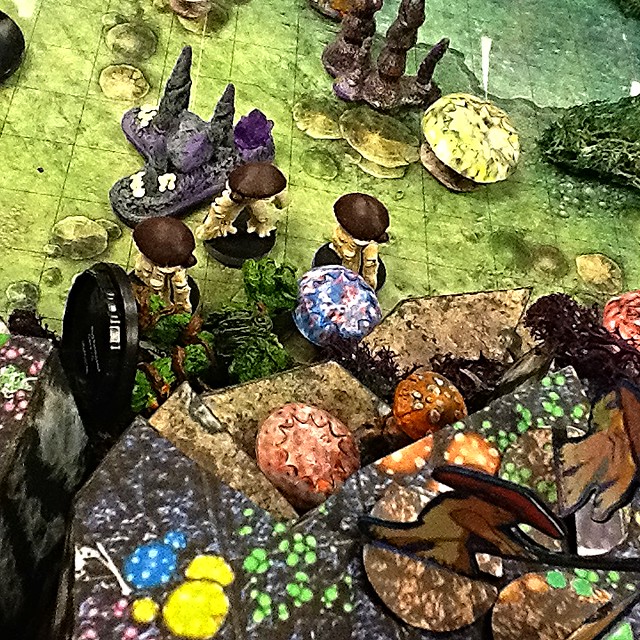 This activity has changed the “color/flavor” of the spore-network.

Stool: “The circle of masters would like to rapport with us.”

The Circle of Masters

Kraum: “You go, I will gather a cask from the central lake.” 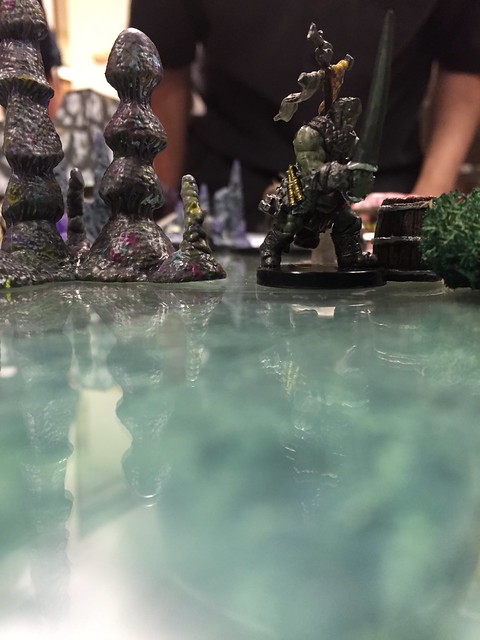 Chant: “I’ll like to still avoid spore-links. I will take a cask as well, and gather from the eastern pool.” 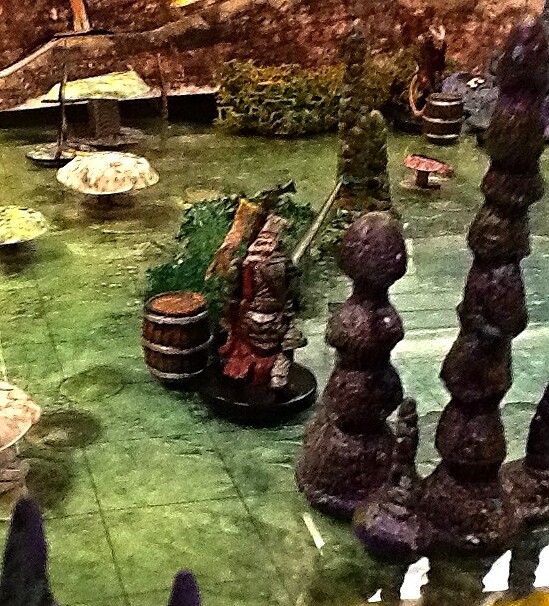 The rest approach the central mound:

Stool:“This is the Circle of Masters. Not all colonies are structured this way. Unlike others, we are arranged by function. These are the leaders of the grove, by cast.” 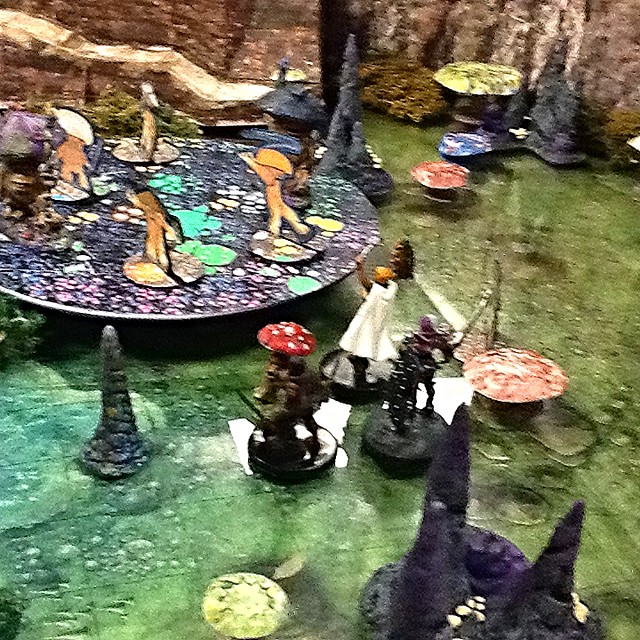 Sovereign Phylo (Blue cap, older, larger): “You are safe. friendly softers. You arrive at a wondrous time, for Neverlight Grove is on the verge of something great, something marvelous! Celebrate, as the day of joy is nigh!”

Bucephalus cocks his head at the strange welcome.

Sovereign Besaidia (Violet Cap) pipes up quickly: “Welcome! And our endless gratitude for returning Stool to us. It has told us already of your great daring and sacrifice. Our circle is enriched by your presence Stool-friends! Also, you do us a service by cycling that Shambling Mound. They are quite a nuisance.”

“Step up to the center of the circle, Stool! What service can we do for you friends?” 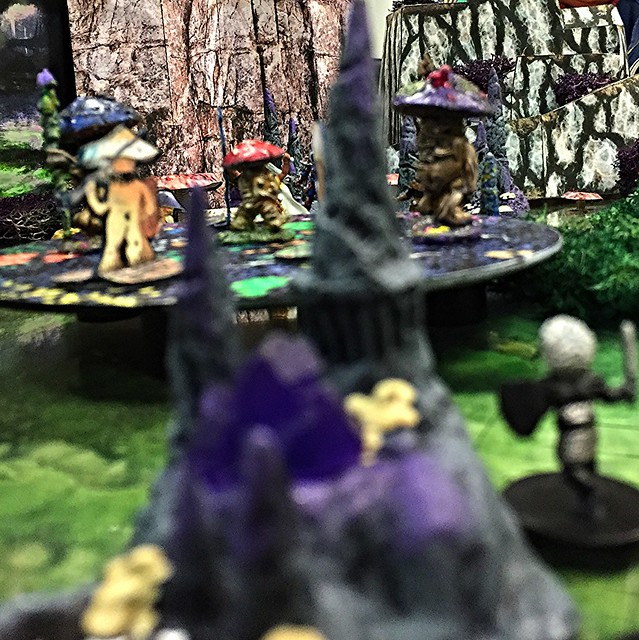 Stool: “We need to harvest some of the groves riches to help a downtrodden people, and to destroy many of our enemies – the Oozes!”

Besaidia, steps down from the platform “Certainly, I will help, please come with me.”

Besaidia briefly breaks contact with the spore-net, but stays connected to the party. “You must be quick, something is very wrong here. Avoid the dark-spotted ones, they have been acting differently every since Zuggtmoy settled in the next cave and starting growing that giant mushroom palace…” 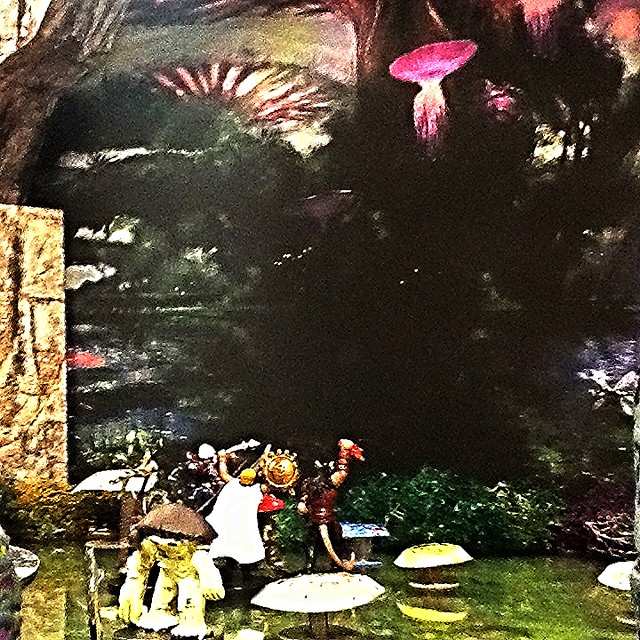 Seems you only need the green lichen and zurkwood now, these are at the edge of the grove at the mouth of Zuggtmoy’s cave.

Having gathered the liquids, Chant and Kraum join the others at the east end of the grove. 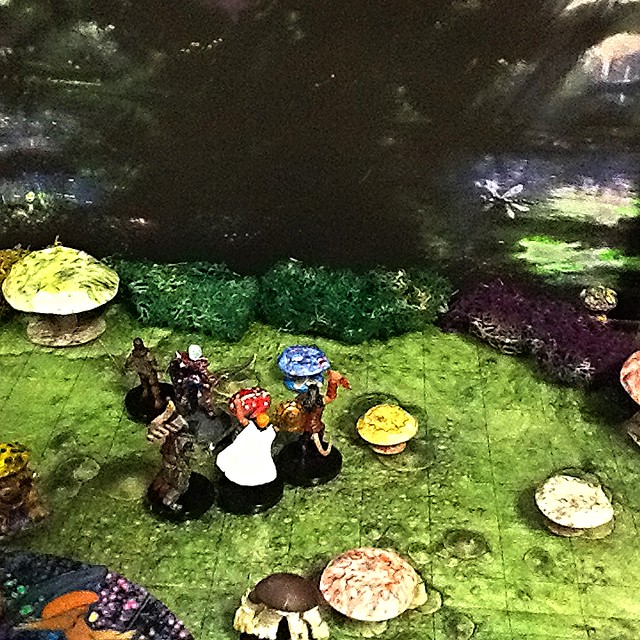 There are several zurkwood trees and tall mosses dividing the cave from the grove.

But when they approach the cave mouth and start gathering the greens moss, they hear moaning and singing blending into a morose cacophony:

From rocky bed the toadstool rose
From chaos dark, her love She shows
Wish! Yearn! Laugh!
The Lady will be wed!
Crave! Hunger! Dance!
Her joyous spores will spread!
Youth is gone, beauty rots,
Araumycos and Zuggtmoy!
Joined together, heart to heart,
Becoming one ’til death do part!
Hail! Hail! Hail!

The moaning is coming from humanoids, buried up to their necks. They are infected and nearly-dead with rot covering most of their heads and faces. One barely recognizable Drow female daises a rotted hand from the muck, holding an amulet – bearing the crest of House Vandree! It’s Shoor’s sister! This is what happened to the other ambush party from Velkynvelve. “Kill me!” she rasps.

Magda says “You’re brother’s going to be waiting a long time for your rescue…” and he slays her with a single stabbing motion. Magda quickly does the same for the other trapped souls.

As the moans are snuffed out, the song from the floating creatures in the grove becomes clearer…

“That wasn’t nice! You’ll have to make up for that.” – a voice, an actual voice coming from something that was once a Myconid, but is now a fetal-like abomination. 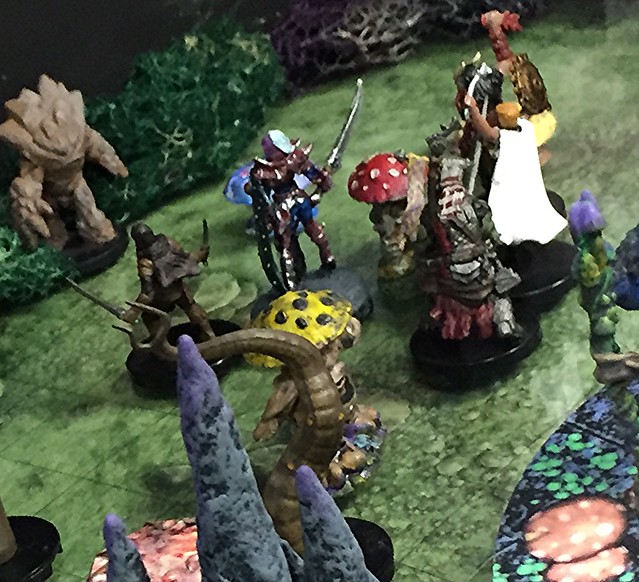 “I am Yestabrod. Are you here for the wedding rehearsal? Friends of the bride or her intended? No matter! Let the love of the Great Seeder embrace you as you become one with her chosen – the Great Body!”

With that – the zurkwood trees animate, and two carnivorous plants previously hidden in the bog attack! 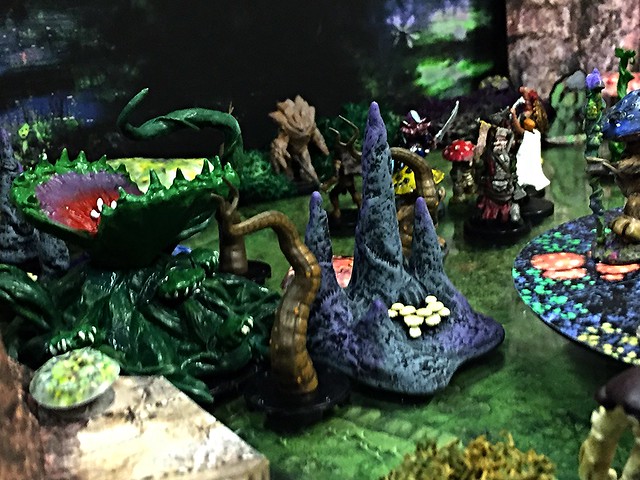 Between the corruption of Yestabrod, the sturdiness of the zurkwoods and the tentacles of the carnivorous plants, this seems like a losing battle. For some reason, the Myconids don’t enter the fight. 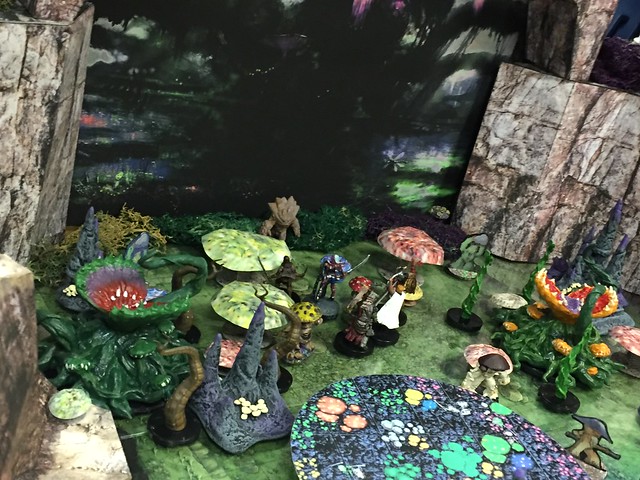 It is touch-and-go, as most of the group focuses on taking down Yestabrod. Keeping the plants at bay is a challenge, one that ends up with Kraum ending up in the maw of the giant man-eater. 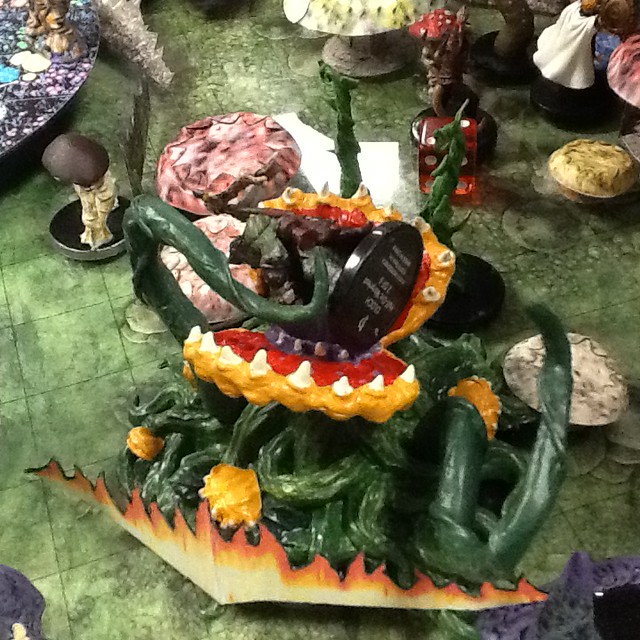 A well timed Philater of Love changes that relationship in a hurry, and he is able to escape.

When Yestabrod is defeated, the Besaidia-aligned Myconids use their pacification spores to the calm the aggressive plants, but now figures are coming from the cave in their direction. They need to flee, and quickly.

Bucephalus picks up zurkwood detritus from the battle, and puts it in his pack. “That’s the last ingredient!”

As they run as fast as they can through the boggy overgrowth, Magda picks up Stool “C’mon, buddy!”

Stool spores back: “No. I must stay. The Grove is under siege. I mush help Sovereign Besaidia and try to save the circle. But, if you let me, I’ll join us so we will not lose each other.”

“Yes.” – Stool lets out a very intense set of bright blue spores, and briefly Magda can see her own face – realizing that she’s been deeply bound to Stool and she knows that it will be able to reach her in an emergency, no matter how far away.

Magda sets Stool down. “Stay alive! I’ll be back some day!”

The gnomes were able to unstick the cart and get it reoriented for a hasty departure, with Sovereign Besaidia’s-aligned guarding their departure.

Will they return to Blingdenstone with the ingredients in time? Will there be enough?
What will become of beloved Stool and the infected Myconids of Neverlight Grove?
What was that whole thing about Zuggtmoy and Araumycos a country-sized colony-being getting ‘married?’

Join us next time for The Second Battle for Blingdenstone

Next Time: The Second Battle for Blingdenstone 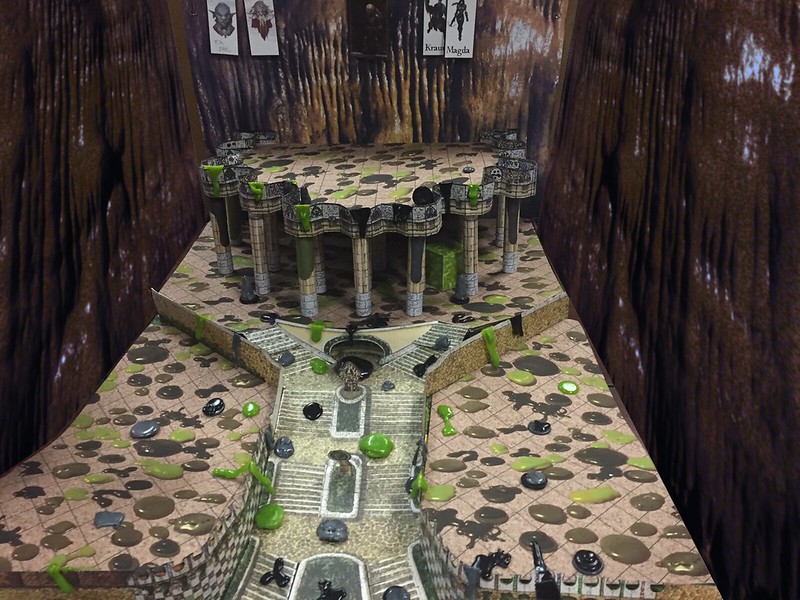