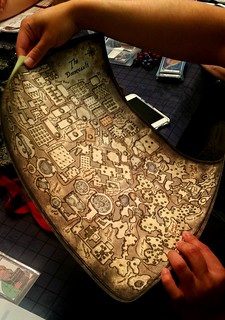 Our heroes are at the on the long journey to Menzoberranzan-the city of the Drow. Shute suggests that they could access the Underdark through the cave-lair of her youth.

When they arrived, it was a disaster – which required Shute and her friends to confront her childhood demons. Thus restoring her clan’s control of the caves, and opening the path down into the Underdark. 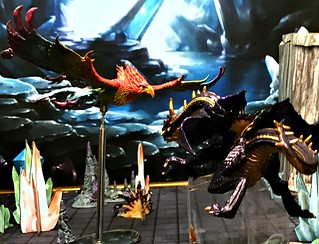 The travel with Jhaamkantar Kront’Tane of house Del’Armgo as their Drow guide, there is little risk of becoming lost or encountering traps or wandering monsters.

Over the next tenday, perfects her Drow disguise – transforming from an Eladrin Princess to a Drow Mistress.

“Of all you taught me, Jhaam, I think I will choose Mizzrym for my clan name.”

“Excellent choice, mistress. A minor house with widely spread holdings – some experience with surface dwellers – and an reputation for being beautiful and cruel without being sadistic.”

All along the way practicing being the master, leading Edryd as “prisoner” with Jhaamkantar as her consort/aide and the rest escorting her and guarding the prisoner. 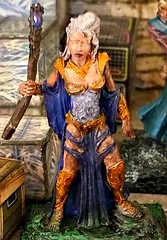 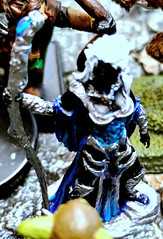 Each rest-period they would make camp, with Nostalgio summoning Leomund’s Tiny Hut to hide them… 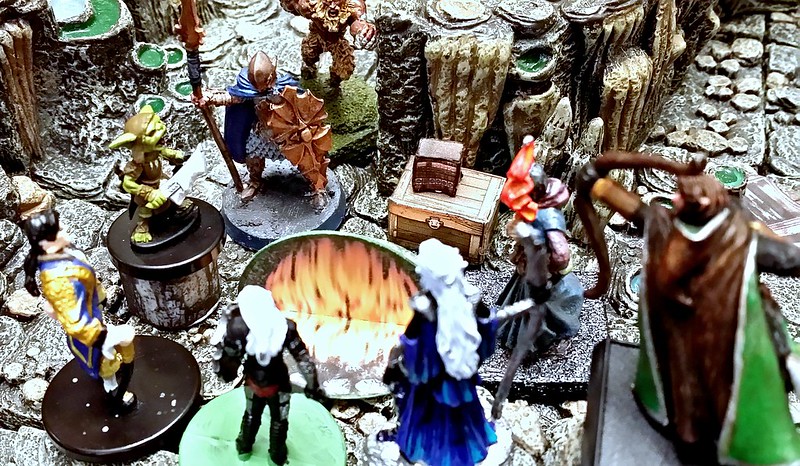 Eventually they encounter some Quaggoth, lead by a maimed Drow elite warrior who identifies himself as Jorlan Duskryn – a guardian of the Velkynvelve prison – who is interested to hear the prisoner story.

He leads them to the rest of his group, lead by Ilvara Mizzrym Drow: priestess and commander of the outpost, and Shoor Vandree: Drow elite warrior who (it turns out) Ilvara’s lieutenant and lover. 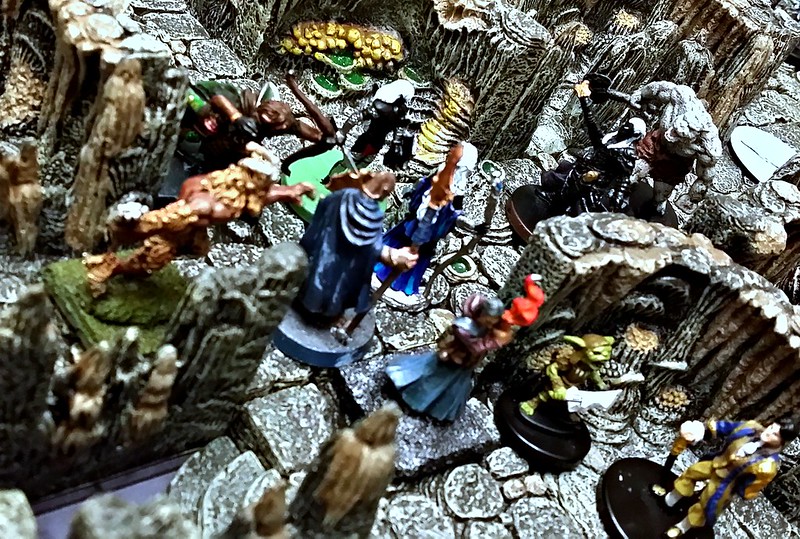 The Velkynvelve party is another several days journey “upward” from the prison, awaiting a meeting with an Envoy from Thay to arrange some sort of inspection tour.

They learn that the Drow are looking at making allies with surface folks – and these Thay have some secret weapons program.

When Ilvara hears that the leader of the group is a “Mizzrym” as well, there is some tense moments between the two as Florynsael’s disguise and unfortunate clan-name choice have her on the defensive.

Soon, the ruse is discovered! And an intense close-quarters battle ensues… 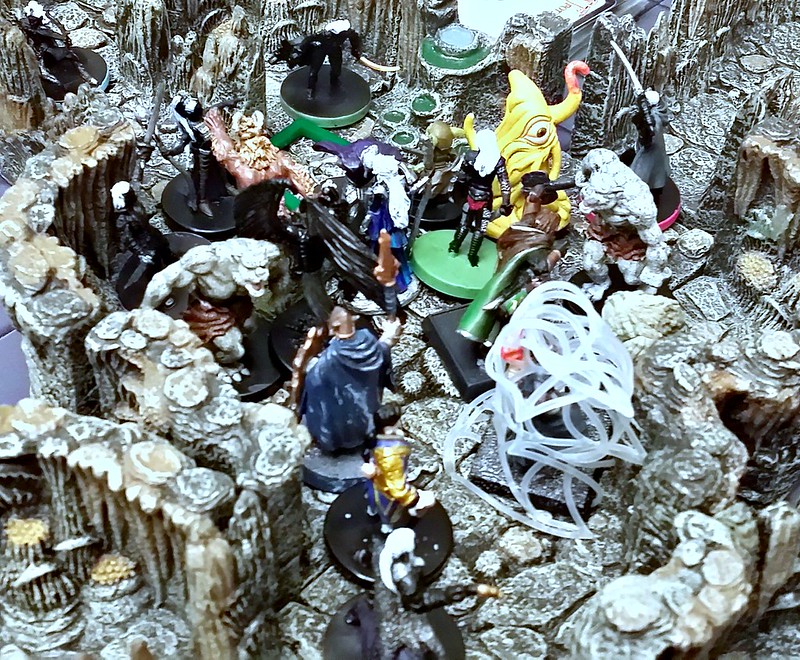 As soon as he sees his rival Shoor incapacitated, Jorlan orders his Quaggoth to disengage the party, and engage the supporting Drow warriors. He changed sides! And almost instantly he and his Quaggoth are all that is left of the Velkynvelve “inspection committee”. 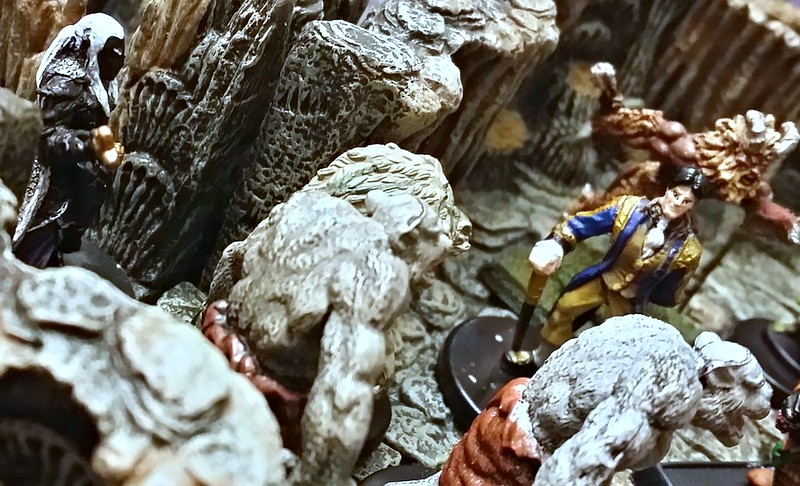 “I will not say why I did what I did. You may take her tentacle staff and present yourself to the Thay Envoy when she arrives.,.”, he hands them a map, “…this should also identify you. Wreak havoc there as far as I care – the strategy of allying with pink skins repulses me.”

“Now, I return to Velkynvelve with the story I want about her death – if you ever come there, do not contradict me. We’ve never met.”

A few hours later, the envoy arrives from Thay:
“I am Syranna, head of security for the Doomvault.”

“I am Ilvara Mizzrym, Warden of Velkynvelve, and will inspect your facility with my team of specialists. Their names and function are no concern of yours.” Florynsael presents most forcefully.

“Yes. Here is your key to the Black Gate I open for you, It will allow you only into the first chambers of the Master’s Domain. Your contact there will add access to the other zones as needed. I have no authority in this matter. Though, during our short time together, I request you follow my instructions for your safety. When you are ready.” 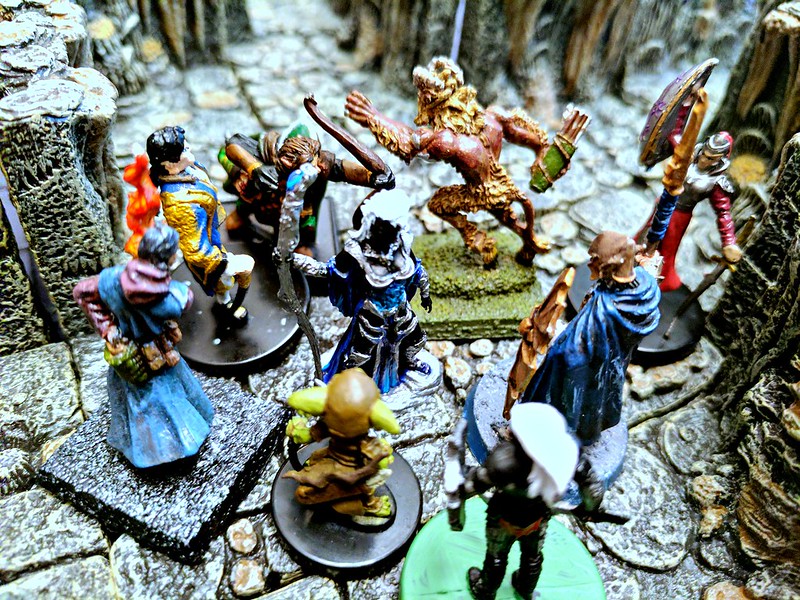 With that, Syranna opens a black portal nearby. “To use your key, hold it into the portal mist. As long as it is open you can pass through to (but not from) the matching destination. Think of these as one-way doors.”

“When you arrive, take NO ACTION, no matter what you are confronted with.” 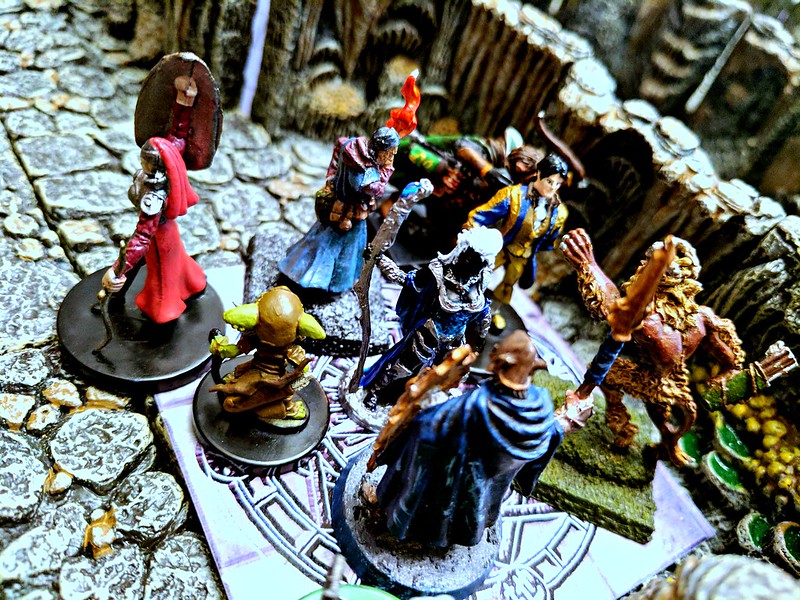 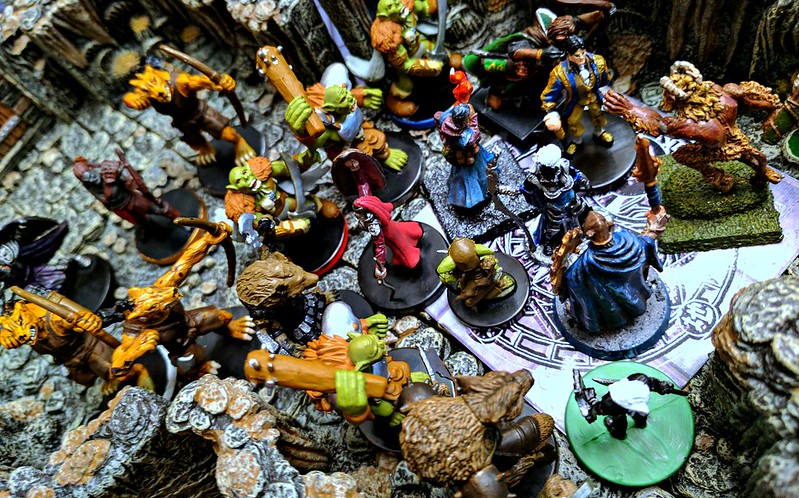 “Good. You passed the first security test. There were those who said that Drow would not have the discipline to withhold. I told them they didn’t understand you at all.” 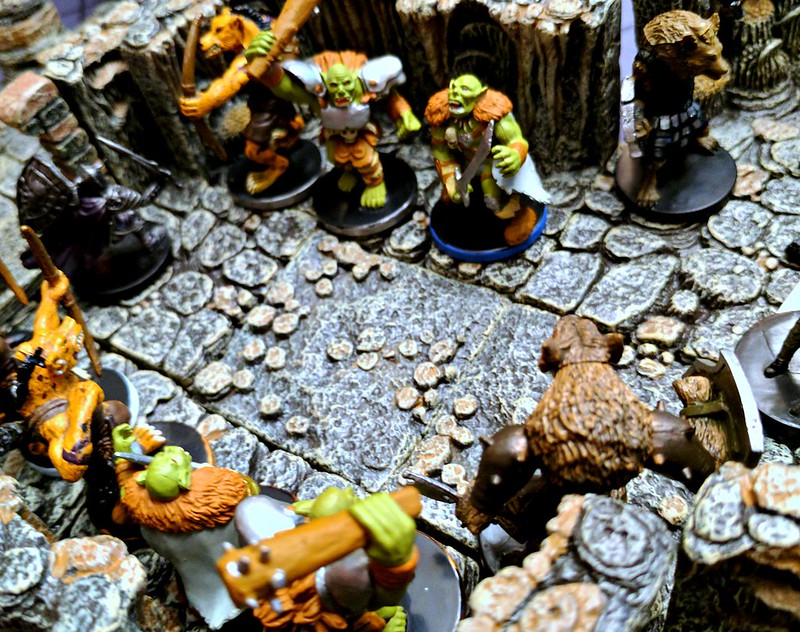 The room commander split the guard and made way, opening the door at the end. 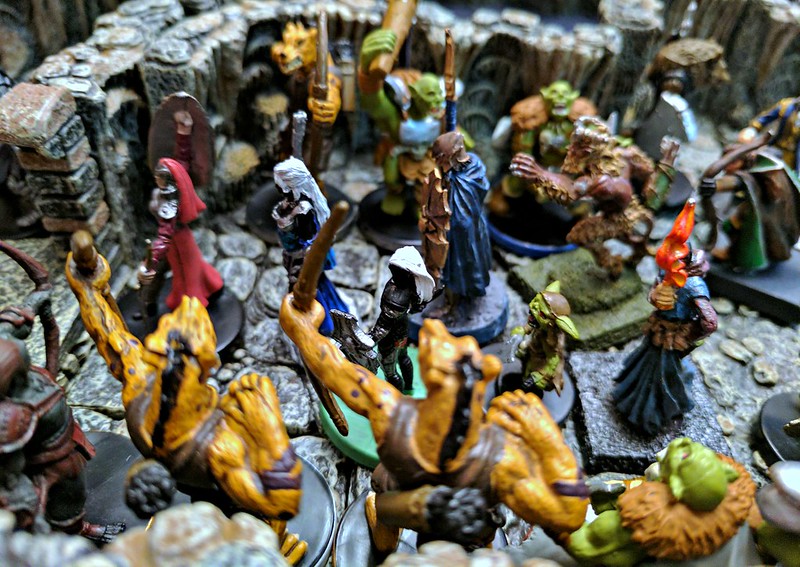 And despite a bit of jostling, they passed the entry without event.

“I’m afraid I can’t disable this next bit – since you aren’t yet bearing the Mark of the They, this next trapped chamber presents a challenge.”

“You know how children play that game where touching the floor is dangerous? That’s this long room. It’s meant to stop mass assaults on the facility. You’ll each have to find a way across or have sharp rocks fall on your heads.” 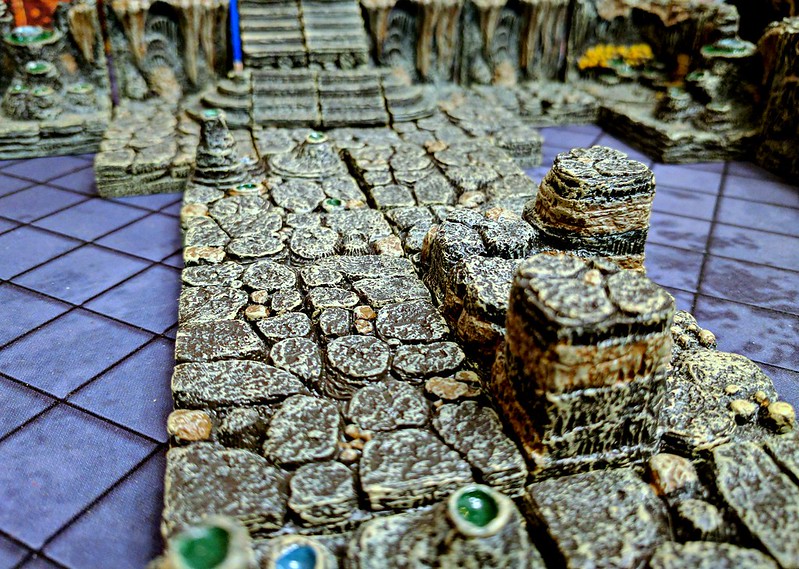 Nostalgio lifts Shute to his shoulders as he has so many time before over the last few years and leaps from the door to the mid-way platform and then to the stairs beyond. 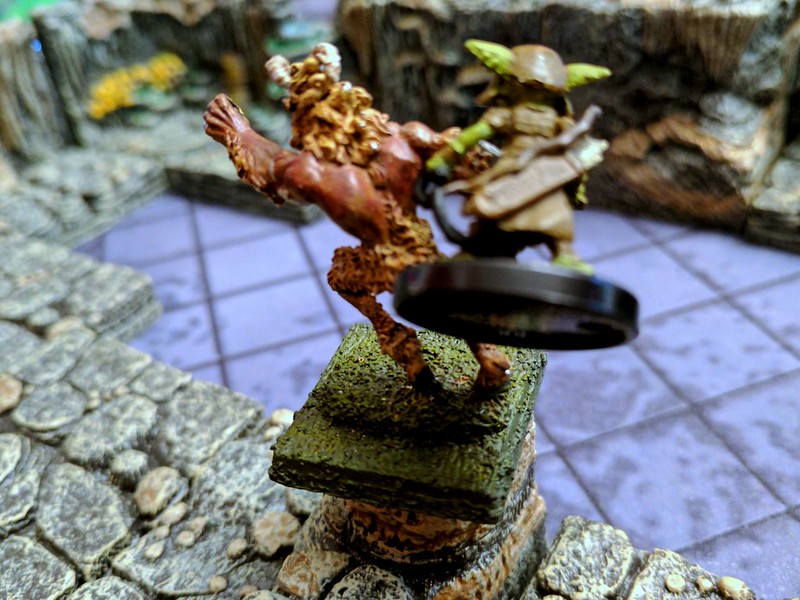 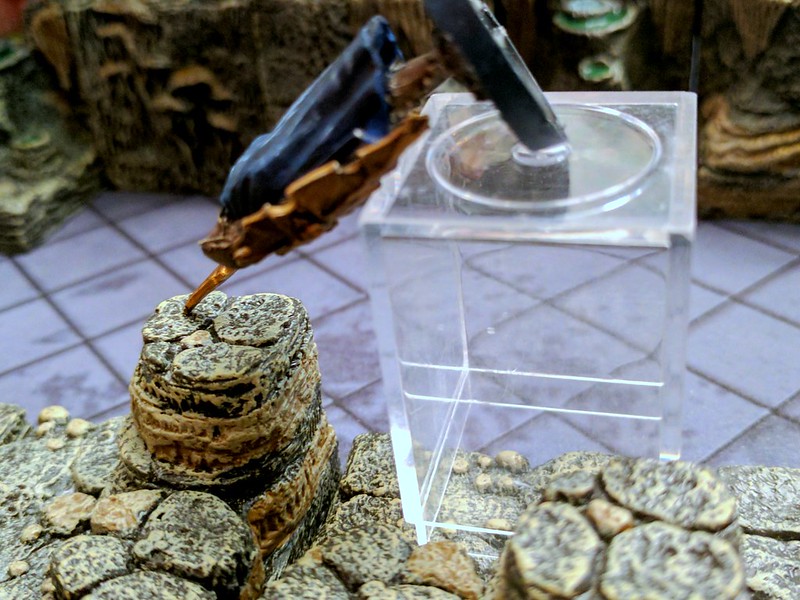 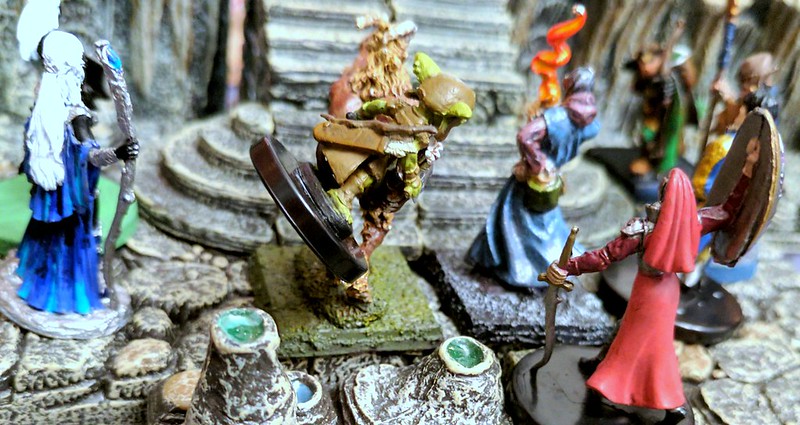 Up the stairs they go to a huge barracks.

Again, the room commander approaches the group, and while Syranna vouches for the team, Shute steals his gate key! 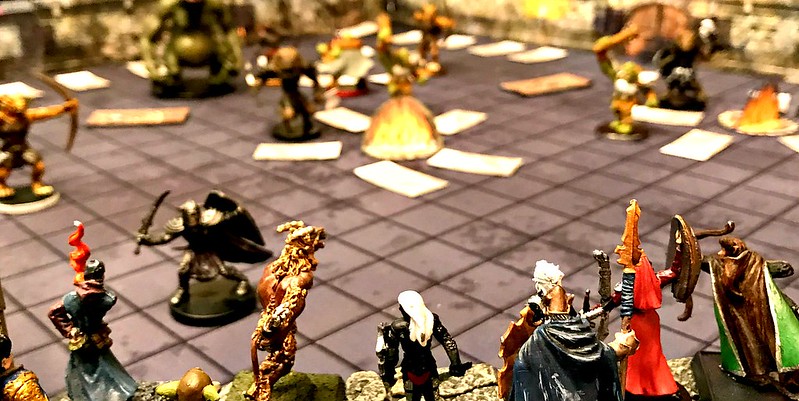 As they cross the room to the exit they need, Shute walks over to (F)ilvarra and hands her the stolen key. 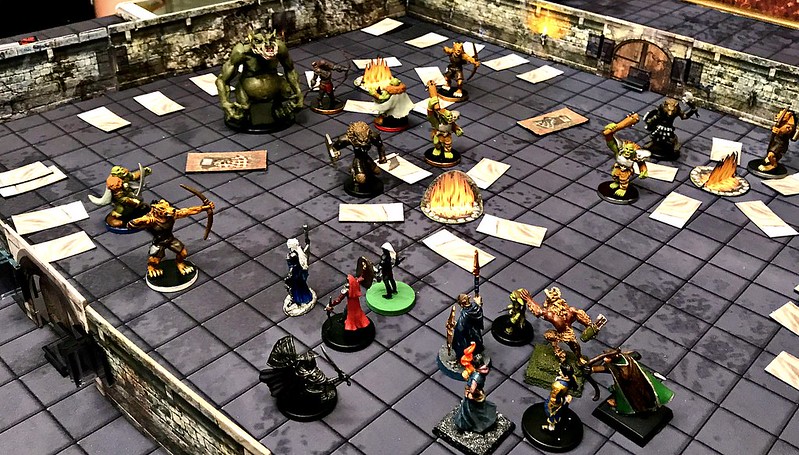 Entering the hallway she quickly touches the keys together to transfer the keys for all the rooms in this zone to the party’s set and hands it back to Shute. 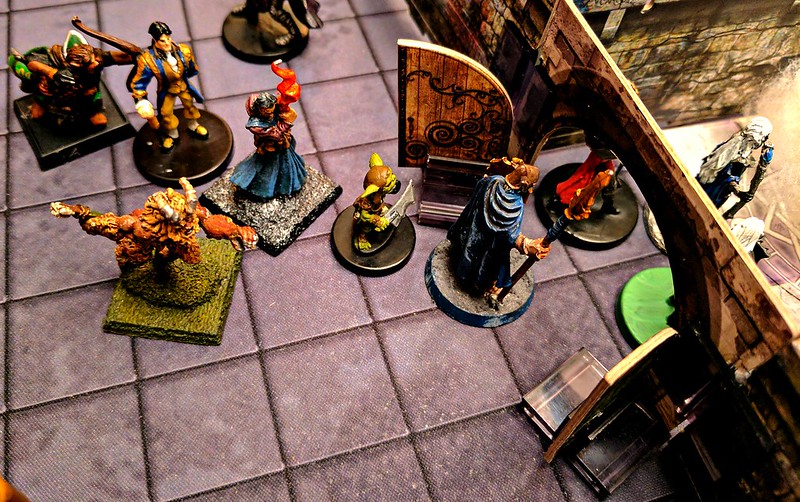 Entering the hallway they face their first White Gate.

“This works just like the black gates, but only connects you to another room in this same zone. You can’t move between zones with a white gate, nor can anyone enter through a white gate from a black one.” 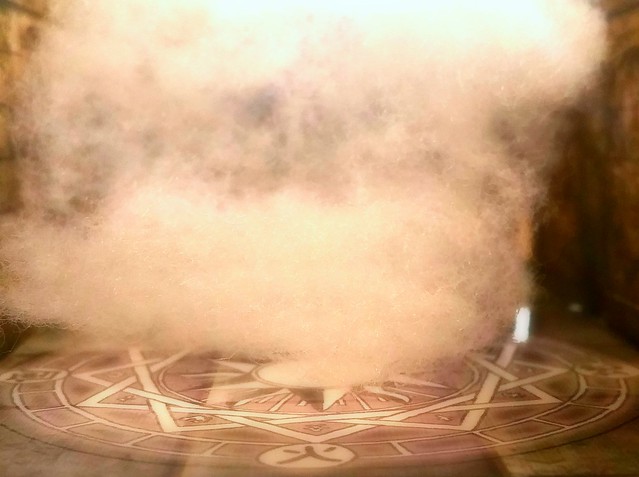 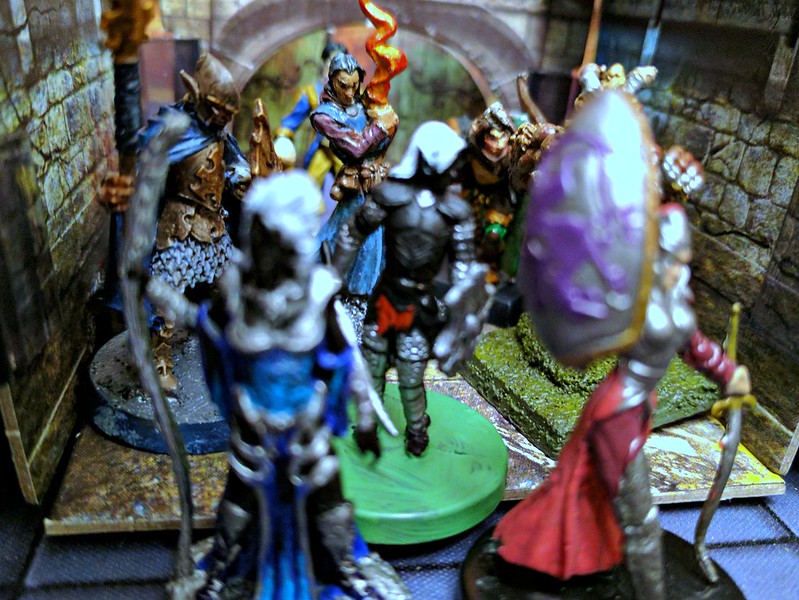 A stepped monument of gray marble shot red dominates an open courtyard surrounded by closed doors. Blue light shines from the top of the monument. The air around it hums with power, its vibration overwhelming other sensations. Red Wizards and other Thayans kneel on the lower two tiers, eyes fixed on the monument.

One of the red-robed wizards approaches – and dispatches another out though a side door.

“You are expected. Please wait here while we inform Lhanis.”

Syranna: “My job here is done, so I take my leave. May our alliance be long and profitable for all!” 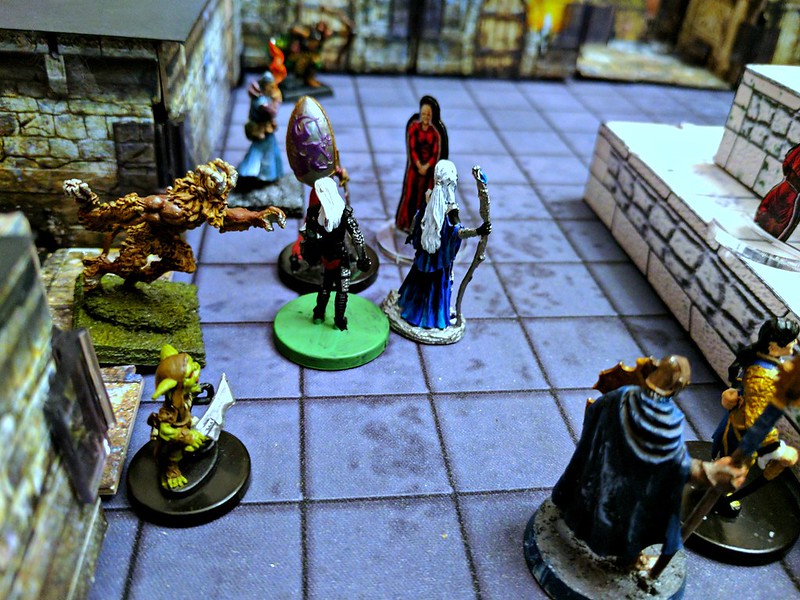 They are fascinated by the powerful blue gem and the people in various states of worship around it, humming and swaying.

The red wizard replies “Yes. It multiplies them several fold, and quickly. But you have to completely dedicate yourself to it.”

Edryd: “Why aren’t they closer?”

“That would kill you.”

Shute is standing near Shiraz, the merchant when she hears the Titan inside her “I hunger, Shute. Go closer to the gem.”

Shute complies. Shiraz notices this and joins her. “Let me lift you up.”

Pale blue beams of power begin to wash over Shute and Shiraz.

“Closer” the voice say to Shute. She looks at Shiraz and says “Higher?”. He just smiles, nods, and helps her up. 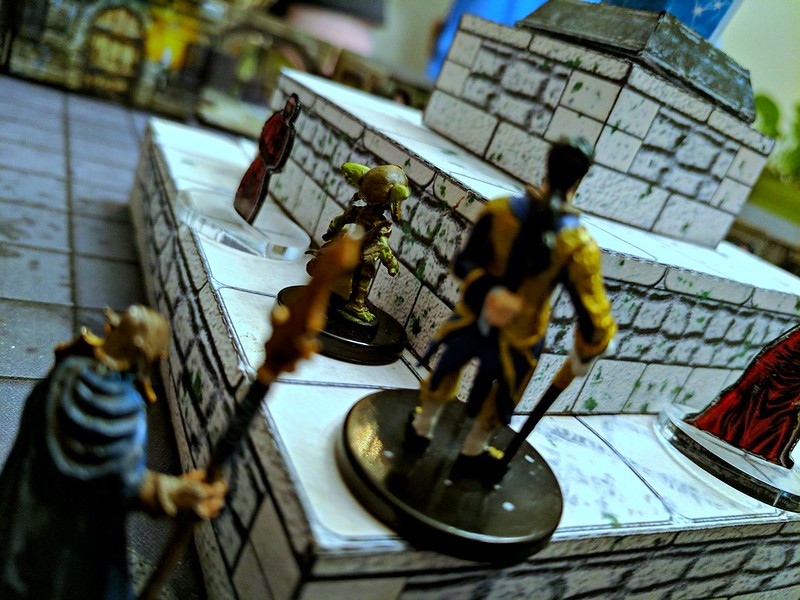 This draws an audible gasp from the room. They are the only one’s on that tier and the blue beams bright and powerful here.

A man in a dark robe enters the room just as Edryd (who, along with Eachann has been staying as far away as possible) “COME DOWN FROM THERE!”

So, they come down just as Lhanis gets to the party. 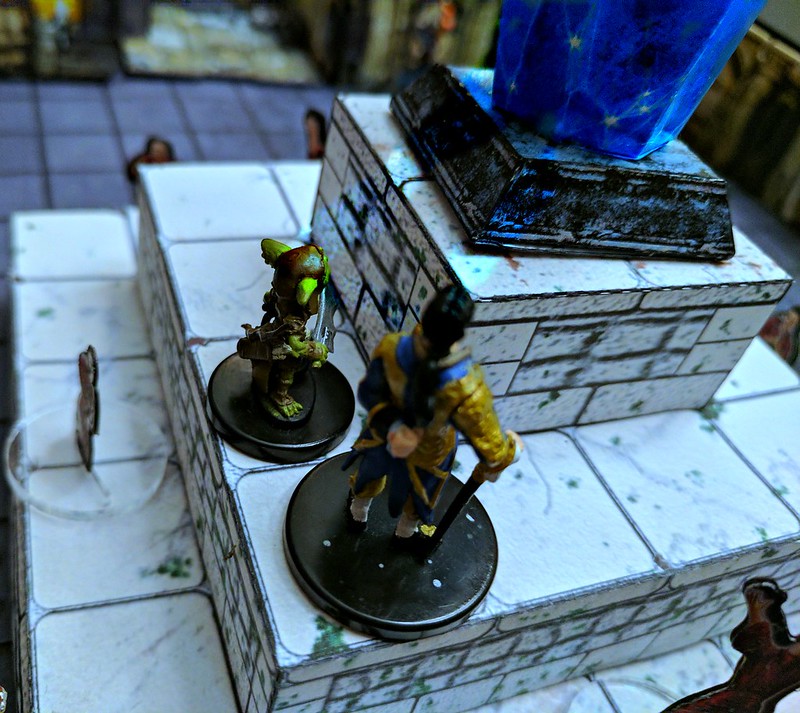 “Interesting. Most unusual. Mistress Ilvara – who are these in your inspection party? They are quite special.” 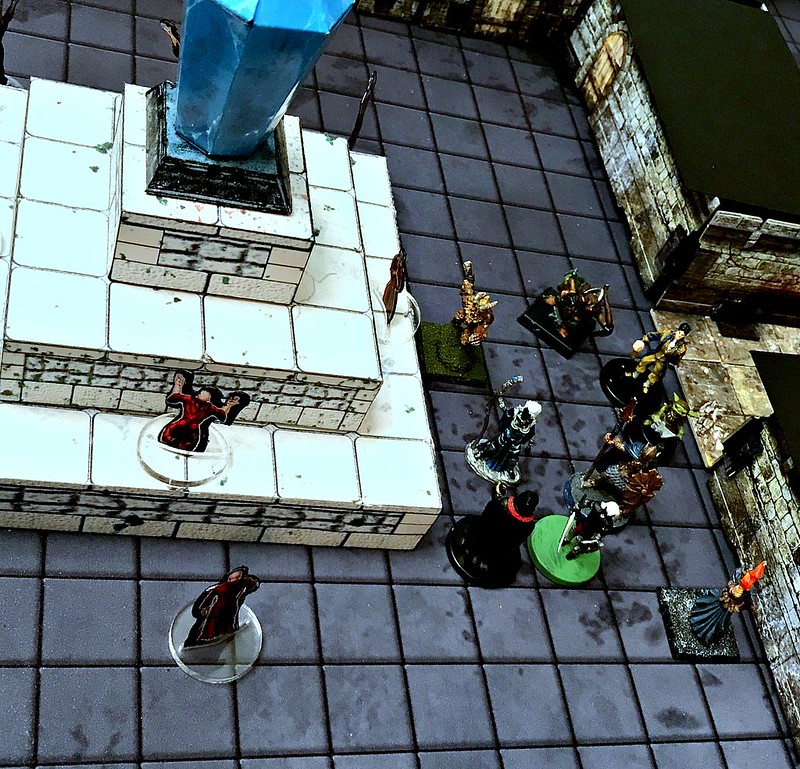 “None of your business. Let’s get on with the inspection. Your envoy was late and we’ve hit obstacles at every turn. We’ve looked at your map and would like to start with the Predator Pools.”

“As you will – I can supply you with an escort and a guard contingent.”

“No! As you can see, I’ve got what I need right here. I don’t want my report to be tainted with your surface-dweller-doublespeak. We will inspect on our own. Now give us access to that zone and we will inspect it.” 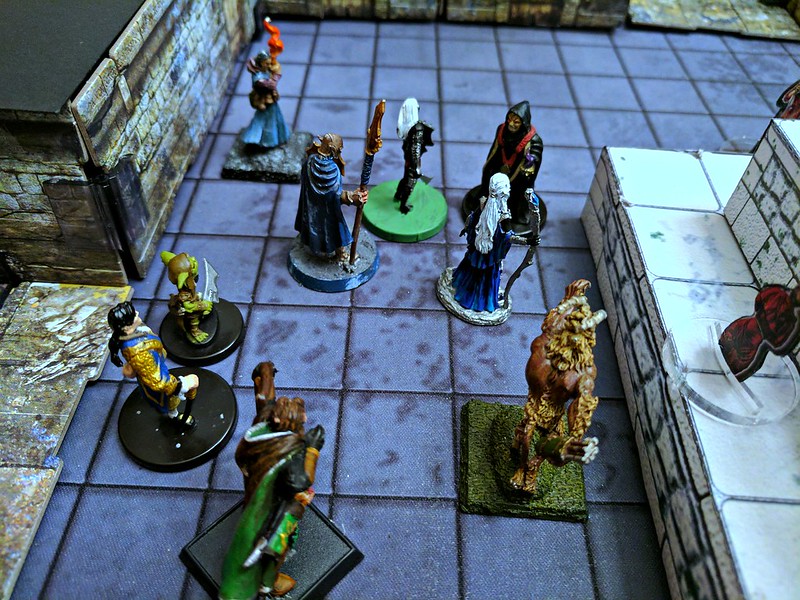 “Mistress – that zone is dangerous – we can’t guarantee your safety.”

“Nor can I guarantee the state of your facility or experiments, if they threaten us in any way.”

“Very well, take these pins – they will identify you as Thayan guests – at least intelligent creatures won’t want to kill you instantly upon sight.”

On the way back to the black gate, Shute puts the key back into the barracks commanders pocket…

Next time: “The Doomvault: Predator Pools” 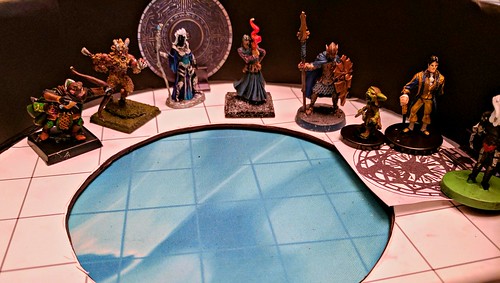