From Baldman Games not available on the DMsGuild and fully D&D Adventure’s League compatible. I ran it at San Francisco ComiCon on September 3rd for a group of 6.

The quoted and centered text below a small (and modified) selection of the gray-box text from the module.

[There were some scheduling snafu’s at the conference – it was their first year, so it’s to be expected – so it took an hour before a group of players was assembled. So this adventure was cut short by one encounter. Though I was prepared with some pretty cool effects, the players never knew what they missed…]

“Melvaunt is a city of merchants and metal smiths. The docks are constantly
filled with ships from Hillsfar, Mulmaster, and more distant ports. The
northern coast of the Moonsea is an inhospitable place, and its people
have a reputation for being rough and unfriendly. But they don’t go around
murdering one another in the streets. At least, not usually.” 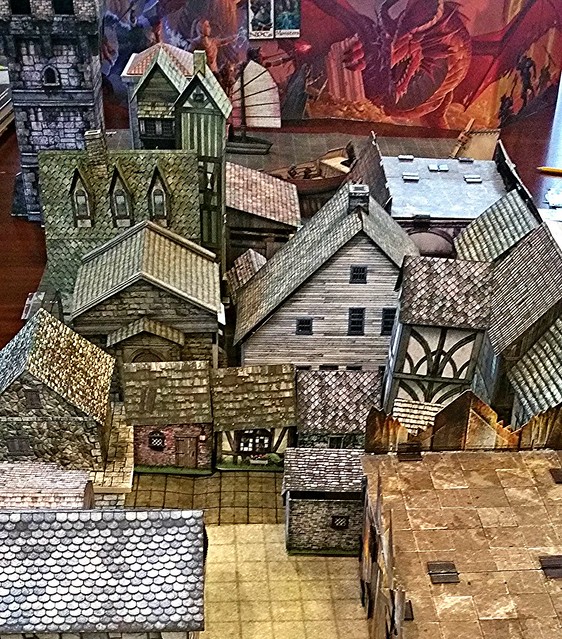 Our heroes are from the Moonsea region and are potential recruits for a new chapter of the Forsite Irregulars. They arrive at Melvaunt by ship and by land… 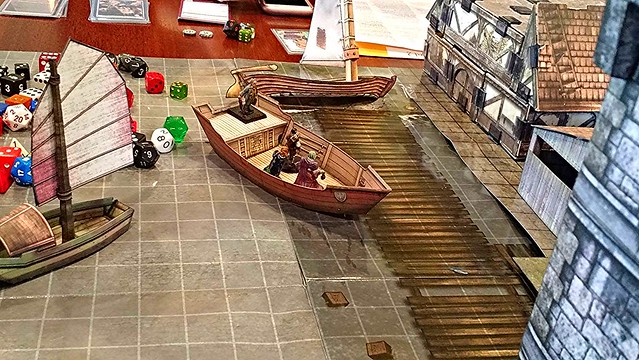 …and told to meet at seven bells at the Winking Narwhal, a tavern near the docks. 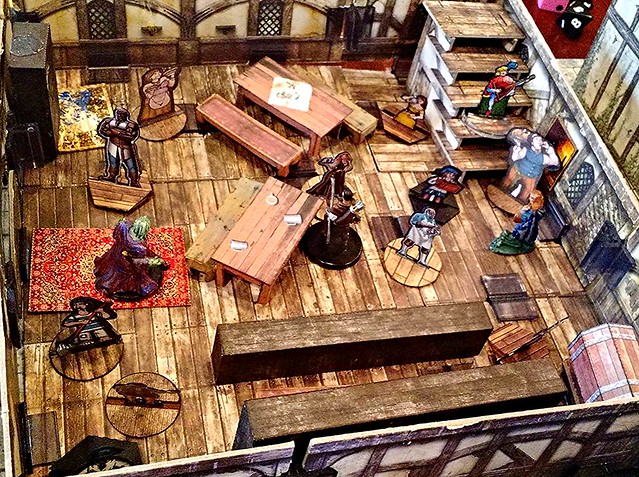 Bosnun, tells them over ales that they are scouting the town to see if it would be a suitable base of operations for the Irregulars in the Moonsea region. They’ll start by scoping out the “Night Market” which opens after 8pm in the middle of town.

“Charley’s given you each some scrip that you can use to equip yourself with something special – make wise use of it!” He hands them each a note that simply states “Good for one favor from Charles Forsite, value in surplus of exchange.”

“Oh, yes” Bosnun adds, stroking his beard, “If you should encounter any of the local constabulary, we’re certain you’ll be of utmost assistance to them! Now eat up! It’s almost 8 o’the clock and you’ll have to hike across town.” He quietly departs the bar. 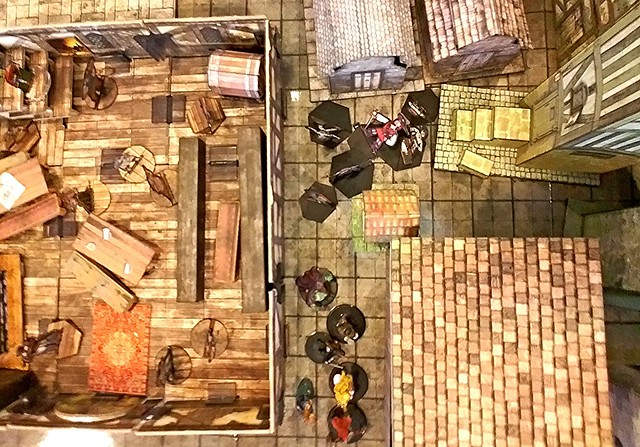 At about 3/4 past 7 they head outside, knowing it will take some time to find their ways through the narrow alleys of the wharf district…

“As you exit the tavern, the stench of stale beer and sweaty bodies is replaced by the scent of burning coal and scorched metal.
They say that the forge-fires of Melvaunt never stop burning, and the local atmosphere is proof enough of that. The stars are faintly
visible in the night sky thanks to the haze that shrouds the city. Still, Melvaunt’s emphasis on trade and metalworking makes
it prosperous enough, a rarity in the harsh lands north of the Moonsea.
No matter what business you were planning to be about, you can’t help but overhear the distinctive sounds of a brawl coming from the nearby alley behind the tavern.”

Oh course they investigate and break up the fight. They deduce that some coins were ‘dropped on [the sailors] heads’ probably from a nearby window – though that seems to be sealed shut now.

As they are still sorting the ruckus out,
“The elaborate mechanical clock tower near the still distant market is audible from most places in the city.
Right on cue, it begins to chime eight bells. As the final peal fades into silence, you hear a scream
from the opposite side of the street.” 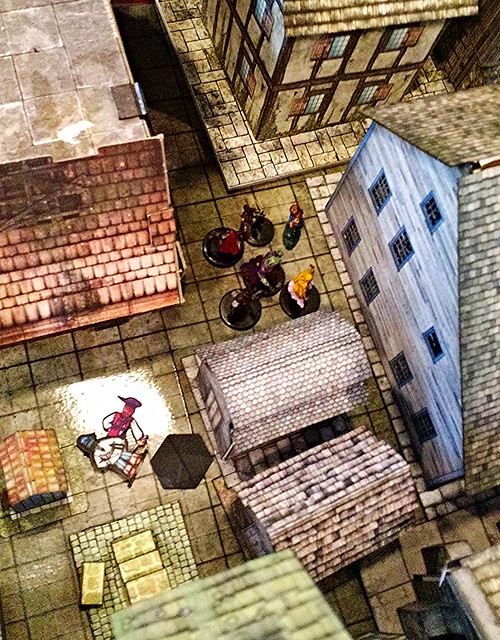 They rapidly rush around to the next alley to find one of the brawling sailors murdered, face down in the mud, covered with metal caltrops. 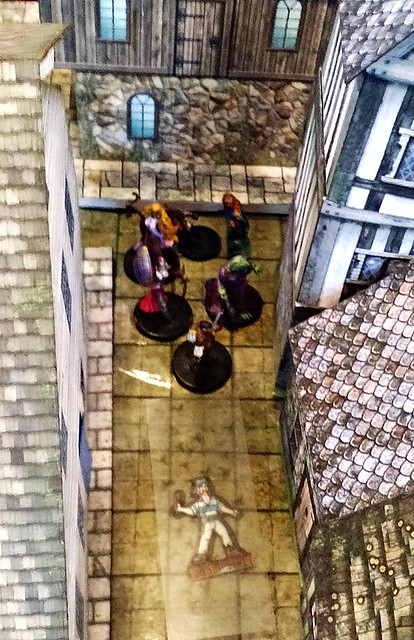 As they rush forward to give aide, they discover that the caltrops are magical – and they spring to attack link swarms of metal mosquitos – catching our fledgling heroes off guard, but not inept, as they quickly disable this very unusual trap.

After being certain that they’ve disabled them all, the approach the body again, noticing a note pinned to the victim’s back, held there with the murder weapon. These the rogue gathers when…

“You hear the shrill noise of a watchman’s whistle and the sound of booted feet
clomping on the cobblestones. A detachment of city watch surrounds the
alley at both ends, their halberds crossed to prevent you from leaving.
An older woman in the uniform of an officer steps carefully into the alley, avoiding
the blood and the caltrops. She studies the area with keen blue eyes and runs a hand
through her unruly white hair. “Hmm, well, now, what do we have here,” she murmurs,
as if to herself. “It seems that note was telling the truth after all. But we didn’t get here
by eight bells. Missed our appointment for murder! I’d have expected the killer to be
long gone. And yet…”
She looks expectantly at you, awaiting an explanation.” 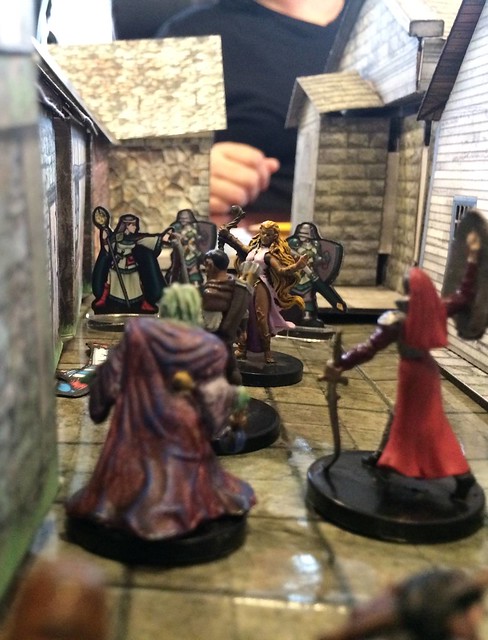 After some [fun roleplaying] the night watch commander explains how it was she came to learn that there was to be a murder exactly here, at exactly this time. The dragonborn quickly revealed their associating with the Irregulars, and their assumed commitment to service – and quickly they set to work decoding the just discovered second (bloody) letter. 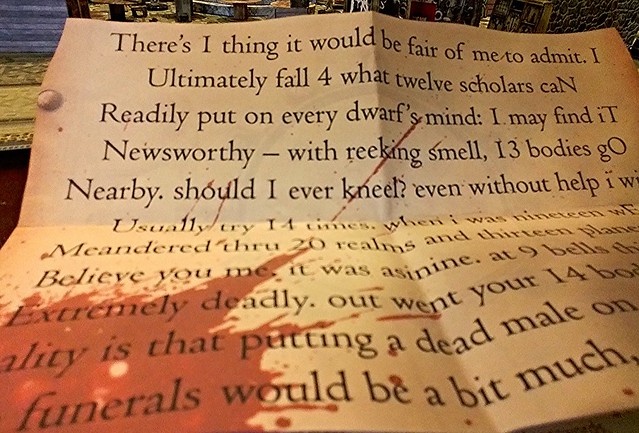 After some decoding, insight, and detective work the Irregulars reasoned that the murderer was declaring he was going to kill again, this time at 9-bells and that a certain merchant at the Night Market was the likely target.

Watch commander: “You have just enough time to make it to the Market before 9pm! We’ll be there with reinforcements just a little after the chimes… I’m counting on you to protect that merchant!”

Running behind a street urchin given a whisper by the commander, they arrive at the famous Night Market of Melvaunt with only a few minutes to spare… 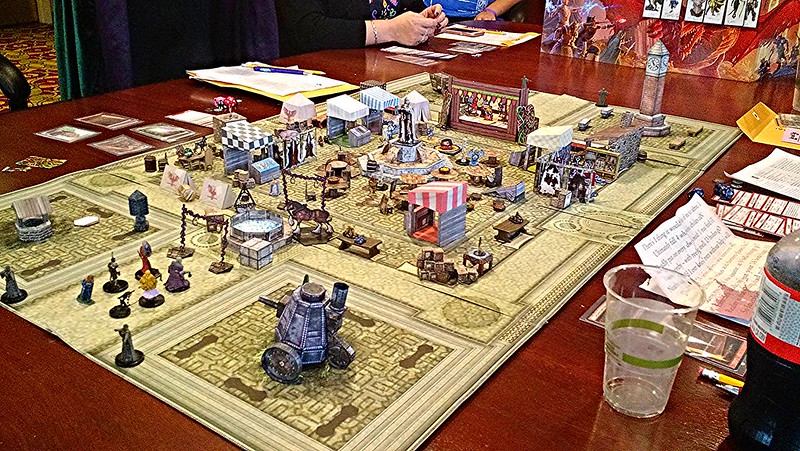 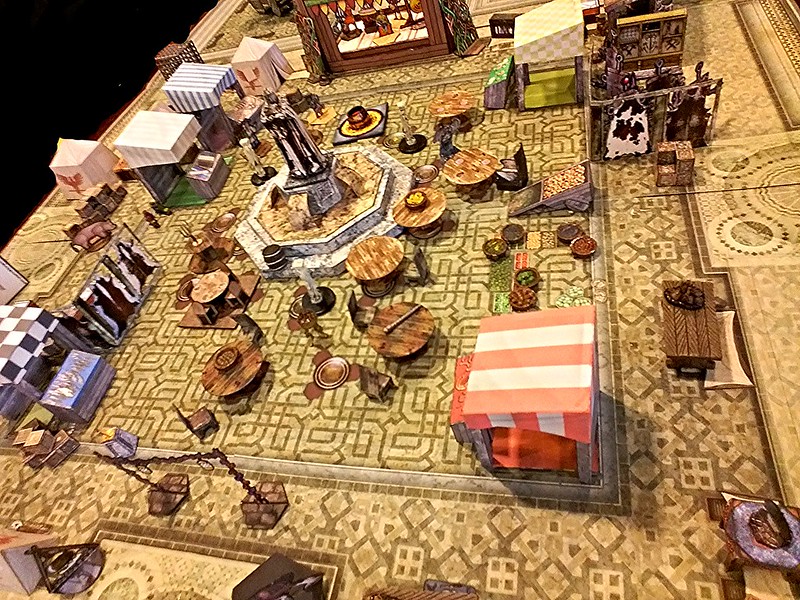 They quickly find the dwarven smith – who is too busy to be distracted with talk of random death threats. They get his attention by showing their special scrip from Charles Forsite “Well, why didn’ya say thaaat!” Here! Check out these SPECIAL weapons. 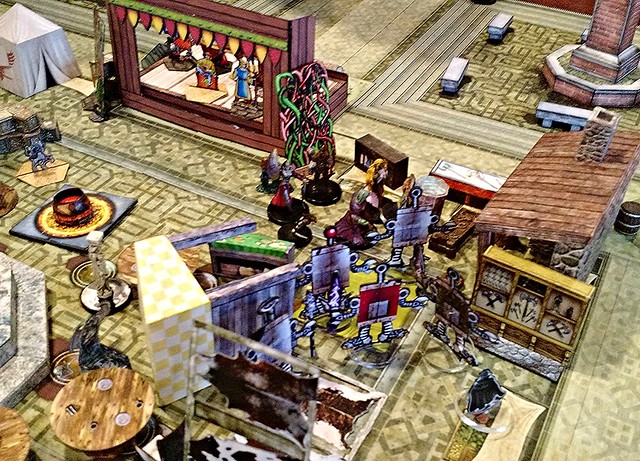 They break through walls and other booths to attempt to attack the blacksmith. 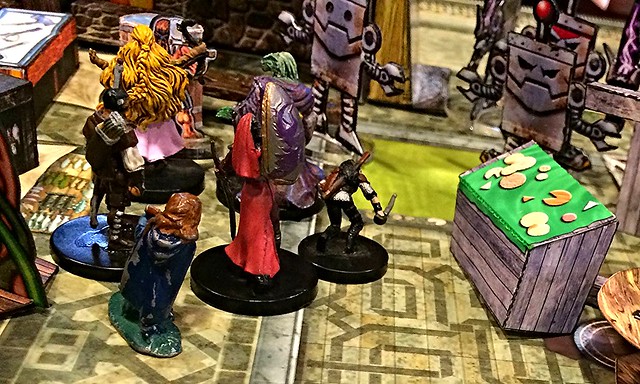 Our heroes quickly push the target back and form a protective wall in front of him. Using the new weapons they just received, were able to slice through the constructs metal hulls as easily as animal flesh.

And the tower starts to ring 9 bells!

At that instant, an arrow comes down from the sky and critically wounds the smith, who didn’t see it coming from the area of the clock tower behind him (and all the Irregulars.) 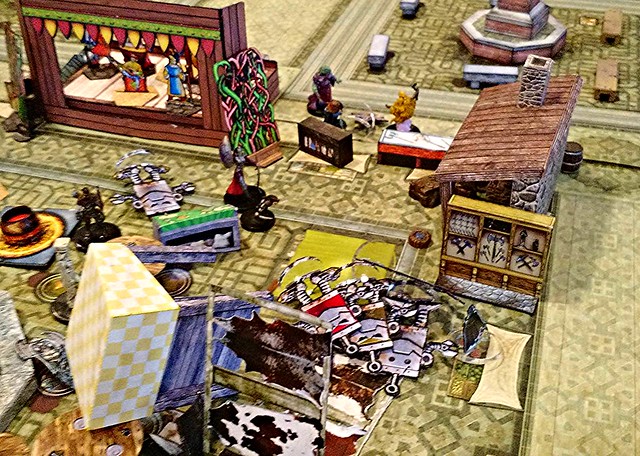 It is only with skill and a bit of luck that they are able to defeat the Gondsmen, provide complete cover for the blacksmith, and revive him – barely saving his life.

“What’s that flying away from the top of the clock tower? Our assassin can fly!”

Again the arrow had a clue [details of the puzzle/clues omitted here because spoilers] that leads our crew to the next murder (guess when) which will take place at the dark temple located back (again) on the warf side of town.

After quickly stocking up at the market, they left the town guard to clean up the mess and headed to the temple. 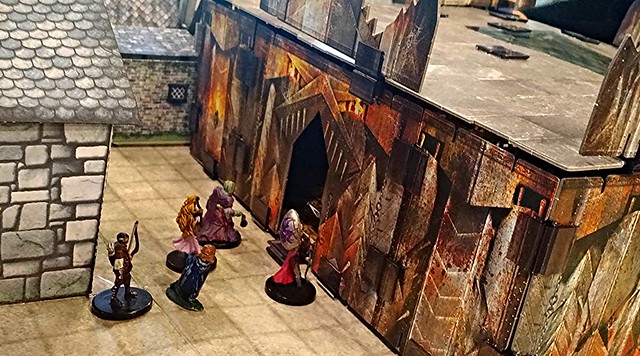 Again, there is resistance as “The Temple is Closed.” “There is no threat.” “Even if there were, I am not defenseless!” >Door slam<

The chime starts ringing and the party is out of patience. The fighter kicks the just – slammed door down as they rush in. “You don’t understand…” they plead… 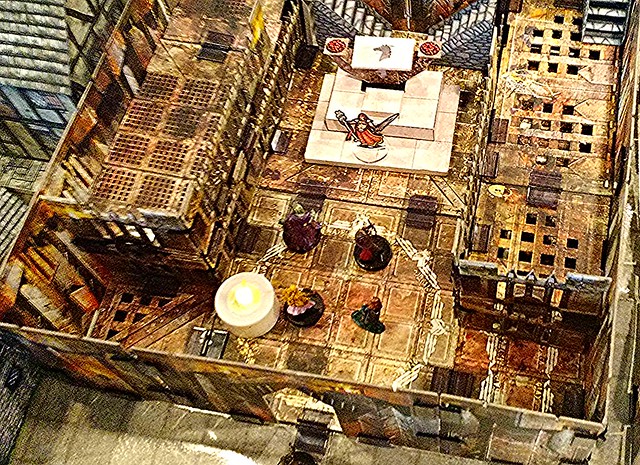 But as the final chime rings “the glass skylight that arches over the sanctuary shatters. A rain of broken glass
cascades down upon you. The priestess cries out in pain and drops to one knee. A massive shard
has impaled her shoulder.
Floating above you in the wreckage of the once-beautiful window is a spindly,
cloaked figure. You cannot make out its face or features, but its arms and legs are
very thin. It carries a bow, nocked with a single black arrow, aimed at the heart of the
priestess of Loviatar.” 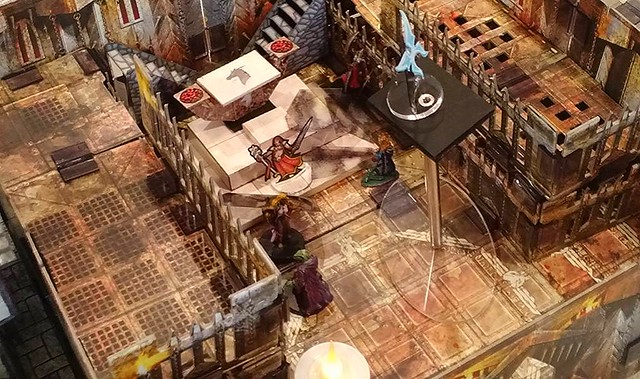 She’s mortally wounded before they can act! Sensing they have only one chance, the Forsite Irregulars release holy hell on the flying murderer – drawing on skills and talents truly worthy to be called Charley’s Agents.

“The cloaked figure recoils from the strength of your attacks, its aim ruined. The black
arrow skips harmlessly off the marble floor. You notice that there does not seem to be
another note attached to it.”

The cloak drops away from the now clearly wounded assailant reveal a small golden metal frame:

It speaks: “Mal-function!” in a metallic voice – similar to the sounds made by the Gondsmen they fought only an hour ago. 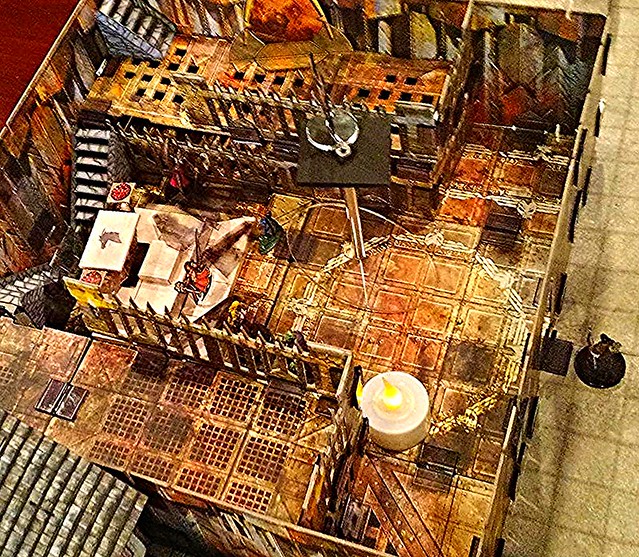 A portal appears on an upper terrace of the temple – showing a window to a strange golden world – covered with hundreds of strange metal beings like this one.

But our heroes will have none of it and continue the attack, deflecting the machine into the edge of the portal – which disappears with half of the attacker in each world! 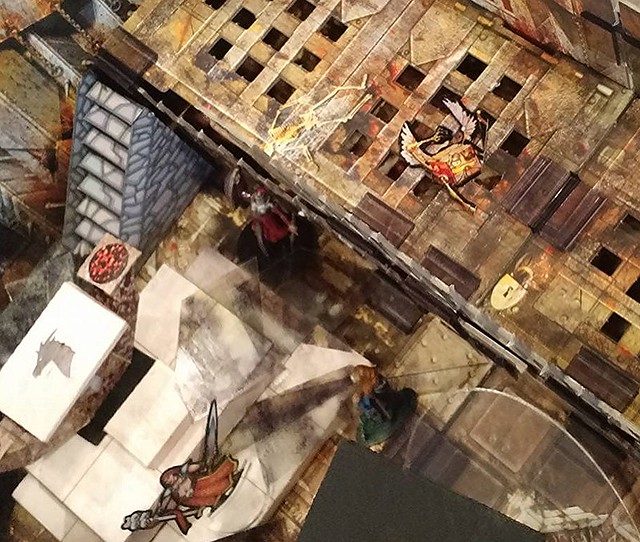 They revive the priestess and thwart the machines plans – but what, exactly WERE those plans? Since when do machines go insane and murder people for no reason? [See CORE 1-2!]

While they rest, the commander of the watch arrives to receive her briefing. “I’d heard tales of the amazing heroism of those Charles Forsite chooses for his agents, but until now I’d scarcely believed them! You’ve passed my test, and we’d be happy to officially sanction you as Protectors of Melvaunt! If you follow me, we’ll get you set up with a modest headquarters!”

I’d like to think my players for a great run… 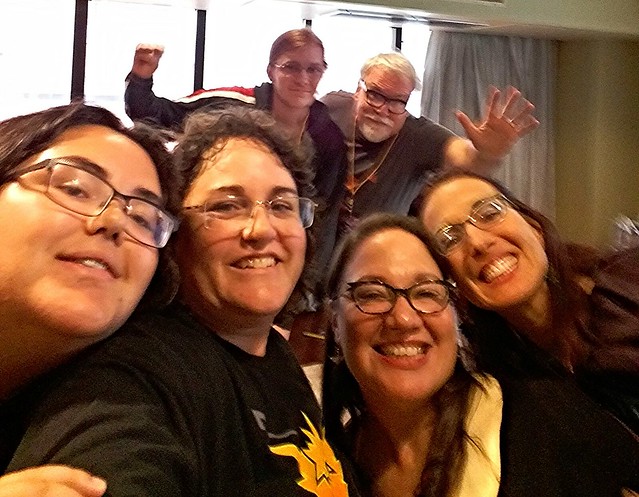 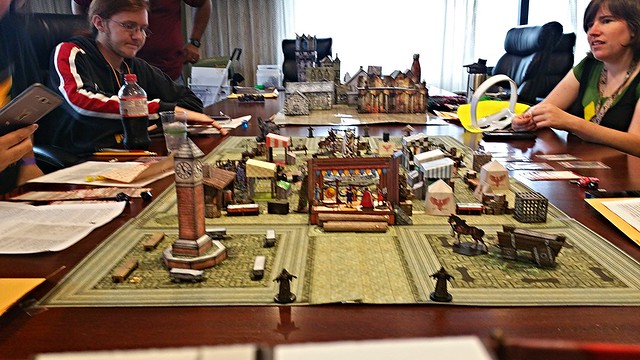 … and Shawn Merwin for getting me an early released copy of this module to run for SF ComicCon 2016 – and Games of Berkeley for hosting – and specifically Cassandra Witiver who invited me to run a game for them.

If you are interested in seeing more papercraft terrain in action, start at oldschooldm.com If you want to learn about building paper terrain, props and minis, please checkout out (and join) the community I hang with Cardboard Warriors I also post notices at @oldschooldm

I didn’t make any special items for this adventure. See my other posts here, and RPGNow for a complete listing of available paper terrain products.